Durmitor, Durmitor, you are the chief mountain!!!

Durmitor is Montenegro’s largest and most visited national park. People often use this area for a break on their way to the coast, while for naturalists and adventurers it represents a long-awaited target destination. Although for the natives here, life is an existential struggle, Durmitor unselfishly spreads its hands and welcomes everyone. Its vast expanses offer infinite possibilities and it is almost impossible to visit it all in one breath. That is why I will share the story of Durmitor in several parts, so everyone can find something of interest. A little something for everybody, for someone quite a lot. 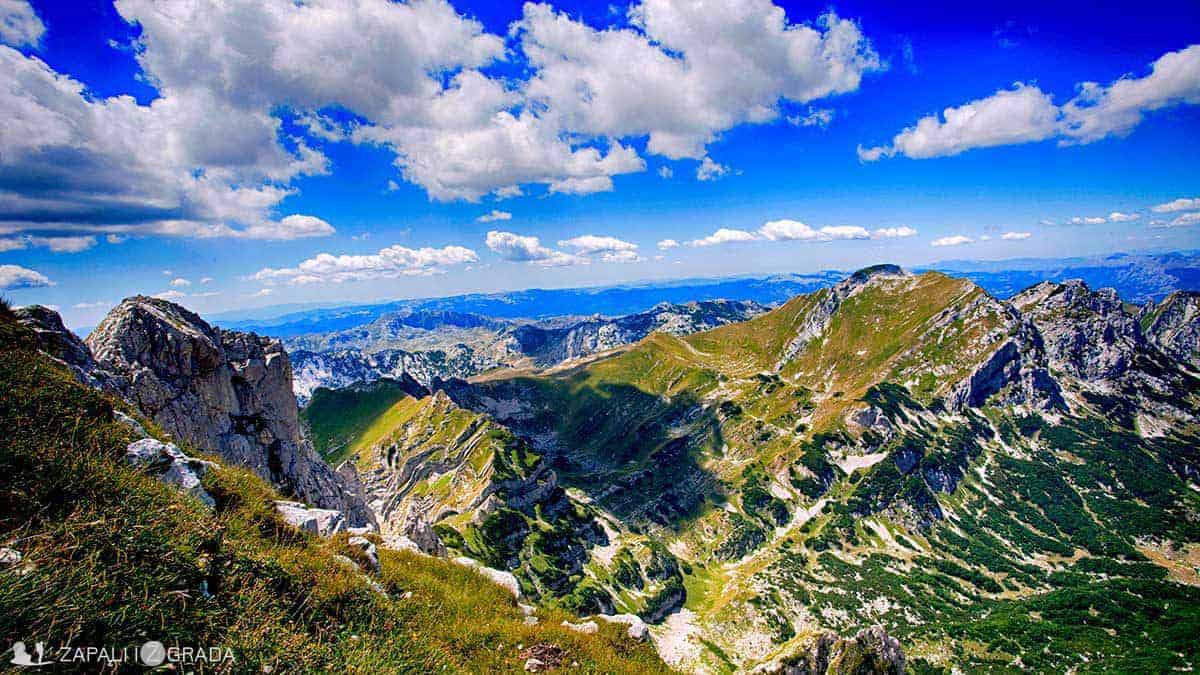 The six-hour drive passes through Užice, Prijepolje and Pljevlja, through Zlatibor, Zlatar and Jabuka, all the way to the bridge on Đurđević Tara. It’s like there’s a huge stop sign, and many take a break from driving to admire the unusual architectural work. There are more or less accurate stories about the place, some historical, some based on legend, but certainly it is an incredible location. 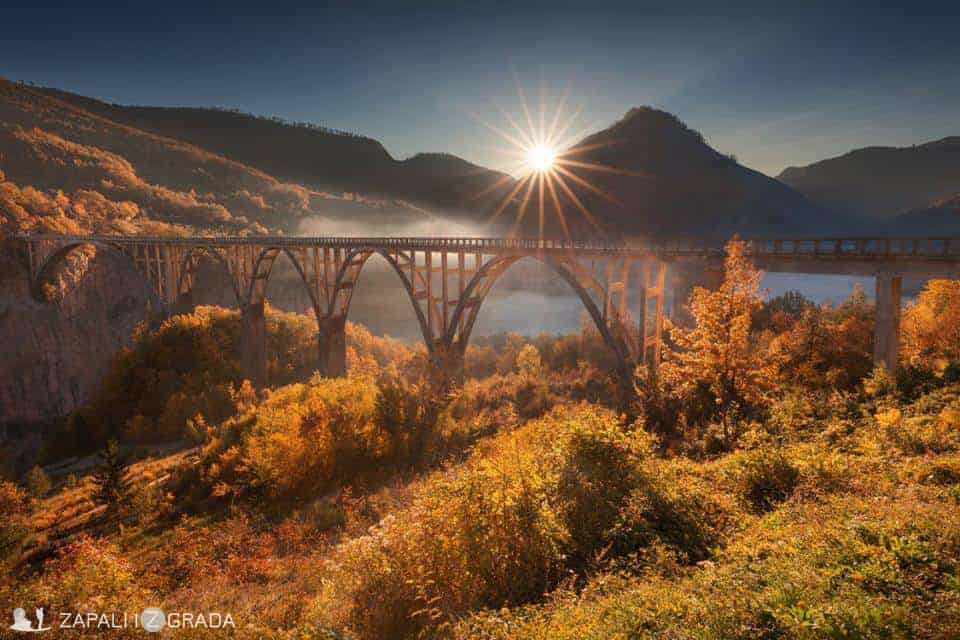 At the time when it was constructed, the bridge held two world records, extending over 365 meters in length and over 150 meters above the canyon of the turquoise Tara. It was demolished and rebuilt under the directive of “the greatest son of our people” (Tito), and a film was also made about it. It is especially interesting that there are several stories about its constructor. According to one account, the bridge is the work of Lazar Jauković, who mined it a couple of years later, and was shot and killed for that act. Other stories mention the engineer Mijat Trojanović.

As you approach Žabljak, pay attention to speed limits. Not only will you avoid a fine, but you will also be able to enjoy the beautiful landscapes as an introduction to what follows. 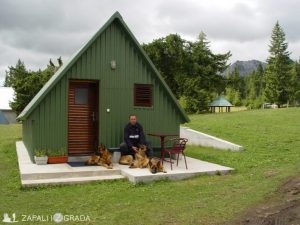 There is plenty of accommodation around Žabljak, but I opted for camp Razvršje. There are studios, apartments, bungalows in the camp, as well as tents and houses on the wheels. As attracted by a magnetic force, hikers, skiers, marathon runners and bikers come from all over the world.

The camp is managed by Mišo Vojinović, a charismatic and intriguing owner with impressive connections, so you can turn to him for anything that is of interest to you. Prices depend on the type of accommodation, breakfast is 3 EUR, dinner 6 EUR and excursions are charged depending on the size of the group and the time of year. All information can be viewed at http://www.zabljak-montenegro.com/en/index.html

Durmitor is a real masterpiece of nature and its every corner is tempting you to discover a hidden story. And there are so many hidden, tempting places, as Durmitor proudly owns 48 peaks with over 2,000 meters and 18 scattered glacier lakes surrounded by dense coniferous forests and a maze of 748 springs, cold and clear streams and rivers. Most of the streams end up in the “Teardrop of Europe” as they call Tara. Read more about Tara HERE.

Durmitor is characterized by an extremely wide range of activities and exceptional arrangements. A piece of heaven awaits those who love rafting, canyoning, cycling, running, hiking, kayaking. Everyone with their own enjoyment of favourite activities, but united in the idea of merging with this beautiful mountain. Although this place is bursting with activity, you still have that indispensable sense of freedom and vastness. 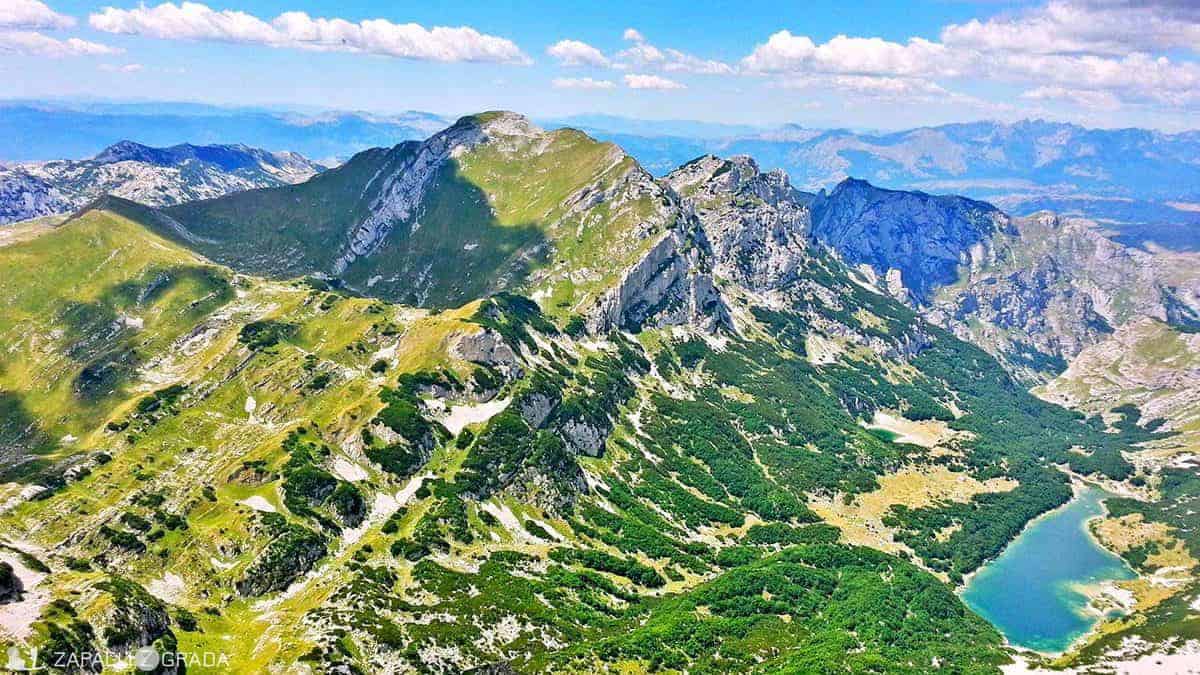 Among 200 kilometres of extremely well marked hiking trails, our small group decided to go for Bobotov kuk, the highest peak of Durmitor. In addition to the impressive nature and adventure, we also wanted to feel how it was to be on Durmitor’s throne. There are several paths leading to the summit, and we decided to take the Sedlo (Saddle), which is at 1907 m (43.098622, 19.050905) for our “expedition”. When you reach the parking lot, a ranger will ask you to pay 3 EUR for the national park entry fee.

With some morning jokes and fine-tuning of the gear, our group enthusiastically starts the journey. We reach a board stating “3h to reach the top”. We shrug shoulders with a self-assured look: “So, what will we do afterwards?” If we learned something on this tour, it’s that time is a relative thing.
The trail starts at a ridge with a solid climb, where in one place the passage is enabled with the help of cables, just to let us know what kind of adventure we should expect. 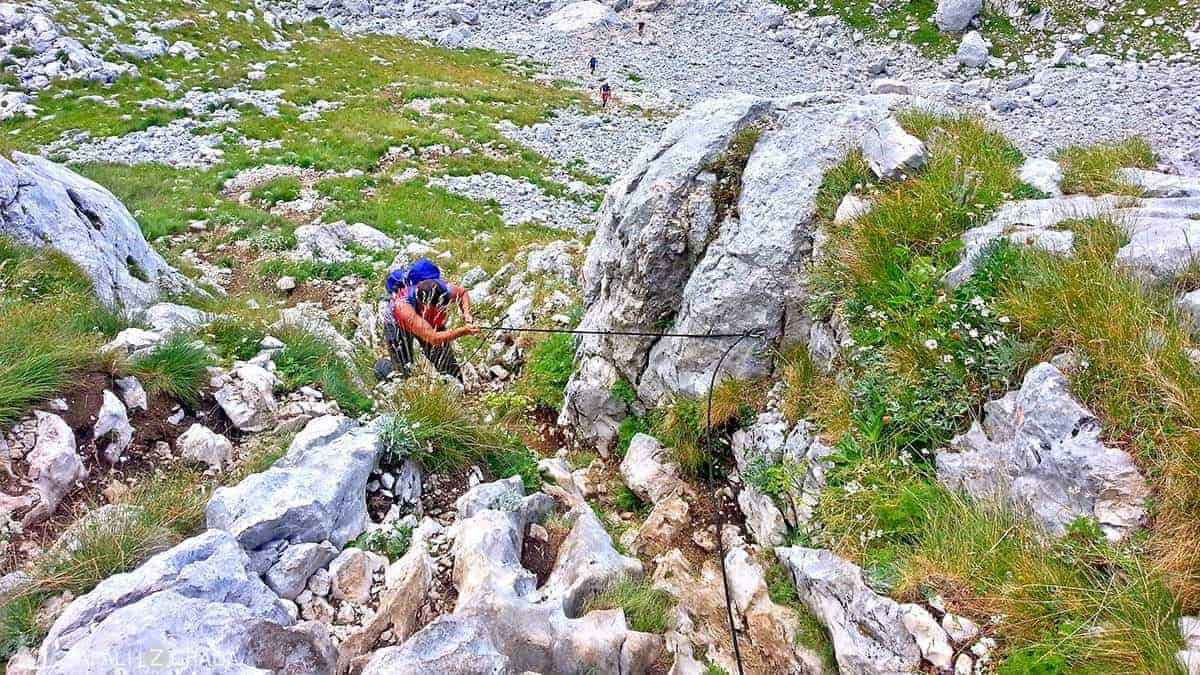 Quickly we come out to the plateau where special physical fitness is not required, and you can completely relax in the beautiful surrounding peaks. There is no doubt that Durmitor is one of the most photogenic mountains. Bobotov kuk is not yet visible, and instead of it, the ridges Zupci and Šareni pasovi occupy attention. 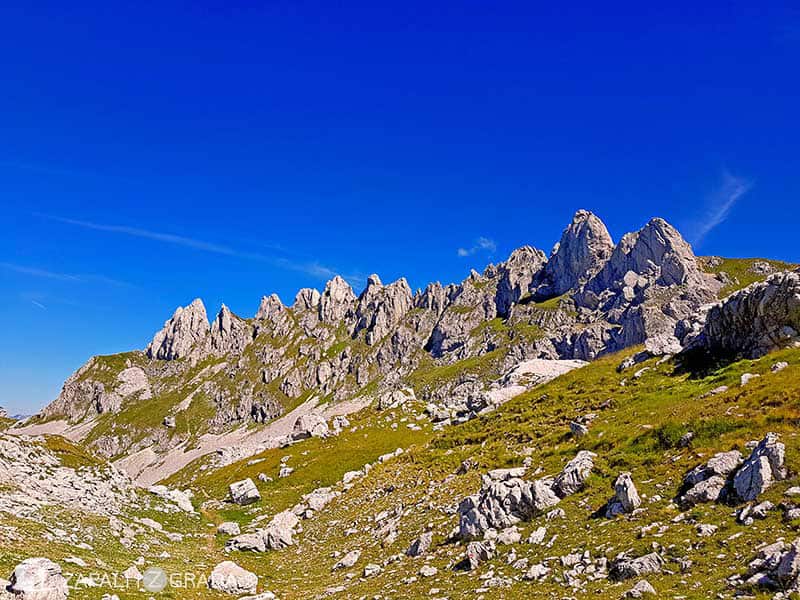 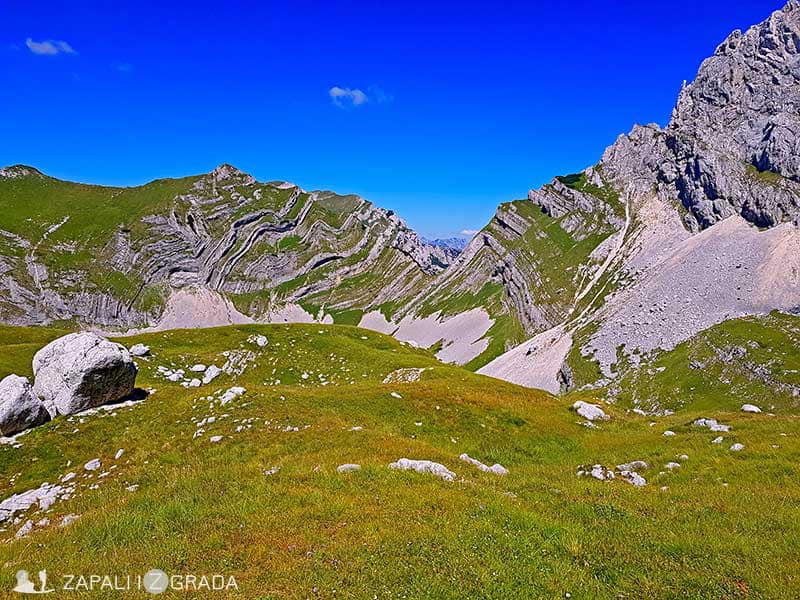 Wherever you look, everything looks unrealistically beautiful, but it’s always so when you reach 2000 m and step into another dimension. Following the trail, we arrive at Lake Zeleni Vir, which was dry at the end of July. In my opinion, the lake should be the limit for families with children or those who are not physically fit. A more serious climb starts at this point. 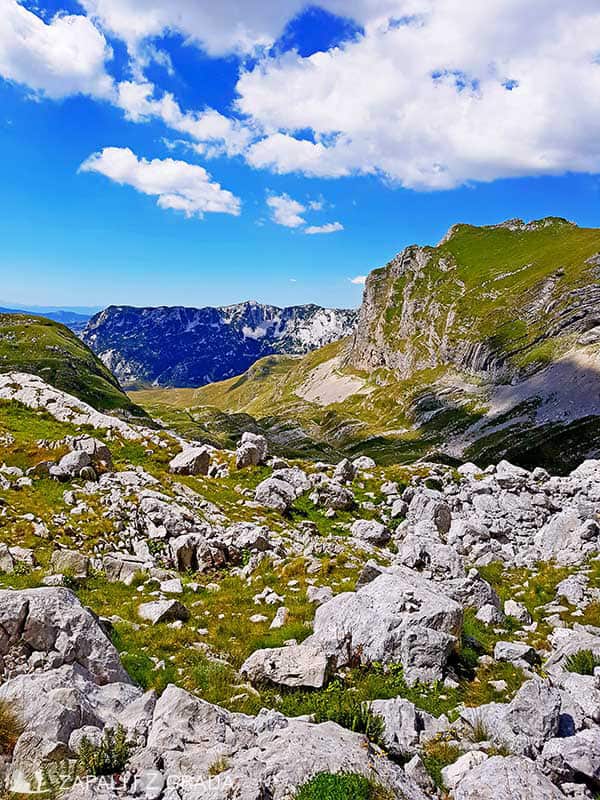 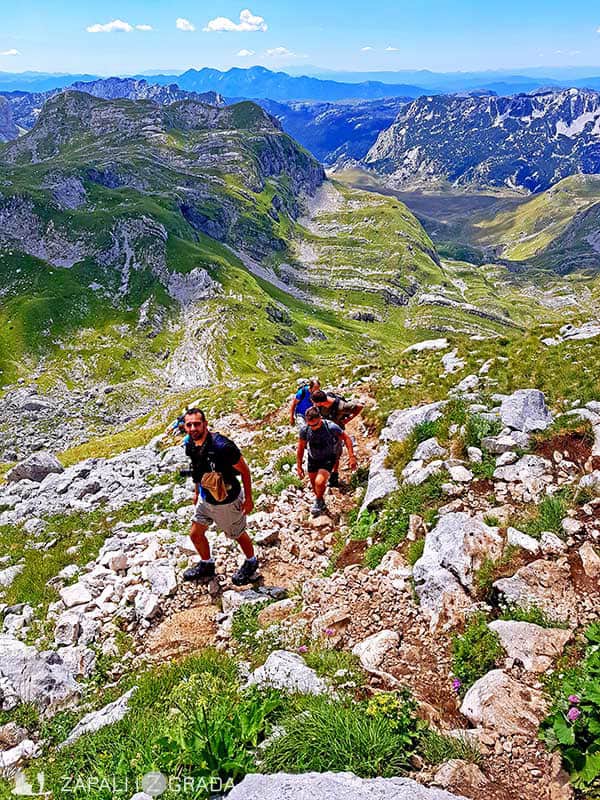 There are different types of trails – trails covered in small pebbles, regular paths, cable-enforced and natural stone stairs and each takes its toll. They require solid fitness, perseverance and desire. At that point Bobotov kuk appeared, looking like a separate mountain in the light of the sunny day. 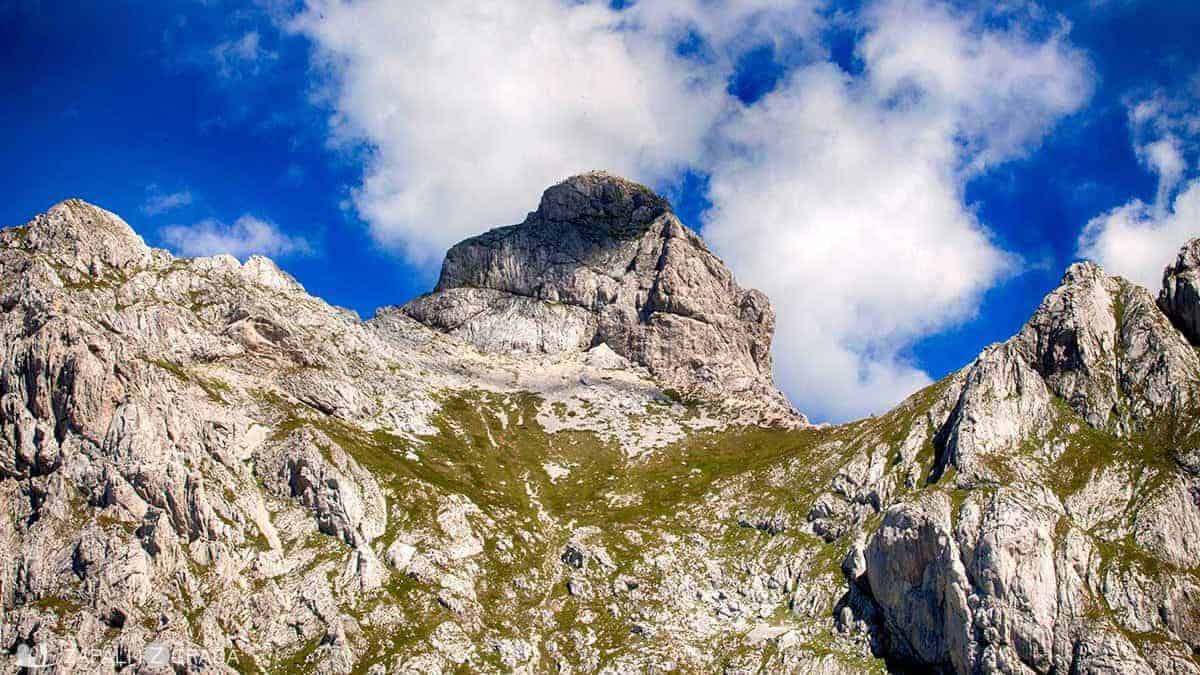 Bobotov kuk in the distance

During a moment of weakness, I thought it would be great if I could teleport there, it would have gone without any effort and sweat, but I would have missed that sweet taste of satisfaction because of another victory. Not victory over the mountain, but over yourself. The mountain can never be conquered. You can only hope that it will cooperate and allow you to climb to the top. 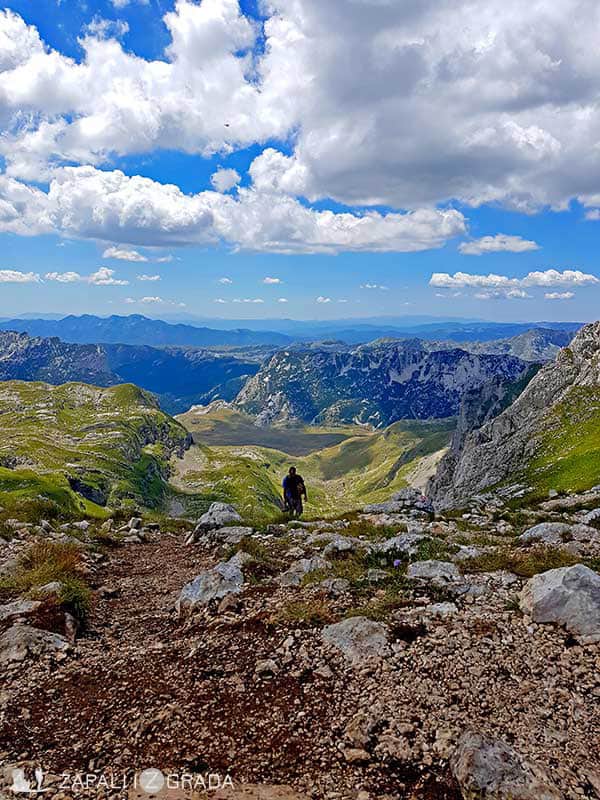 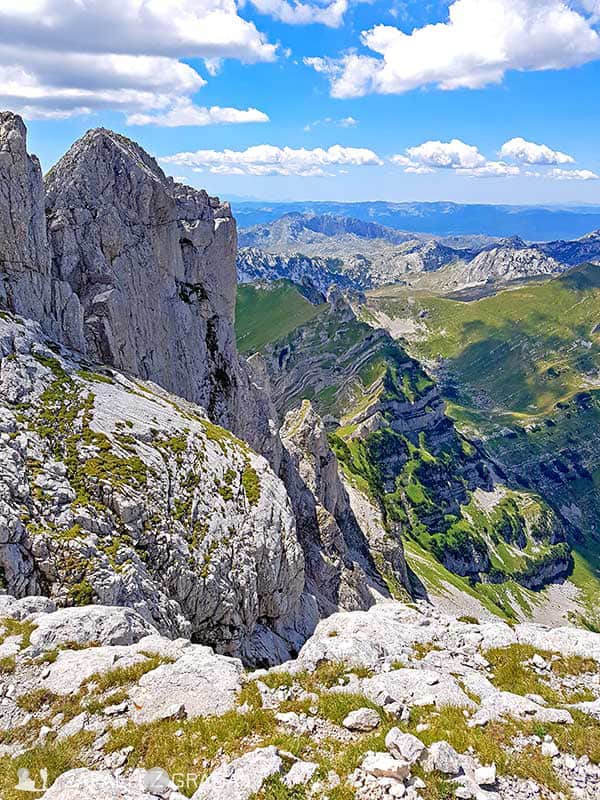 And while I fought against my thoughts and this serious ascent, someone ran past me at an incredible speed, given the angle of the slope. Probably my face would not have looked as if I had seen a UFO, had I, at that time, been informed that this is a runner from Dubrovnik’s, who often comes to Durmitor as part of his preparations for the ultra-marathon. Way to go, dude! 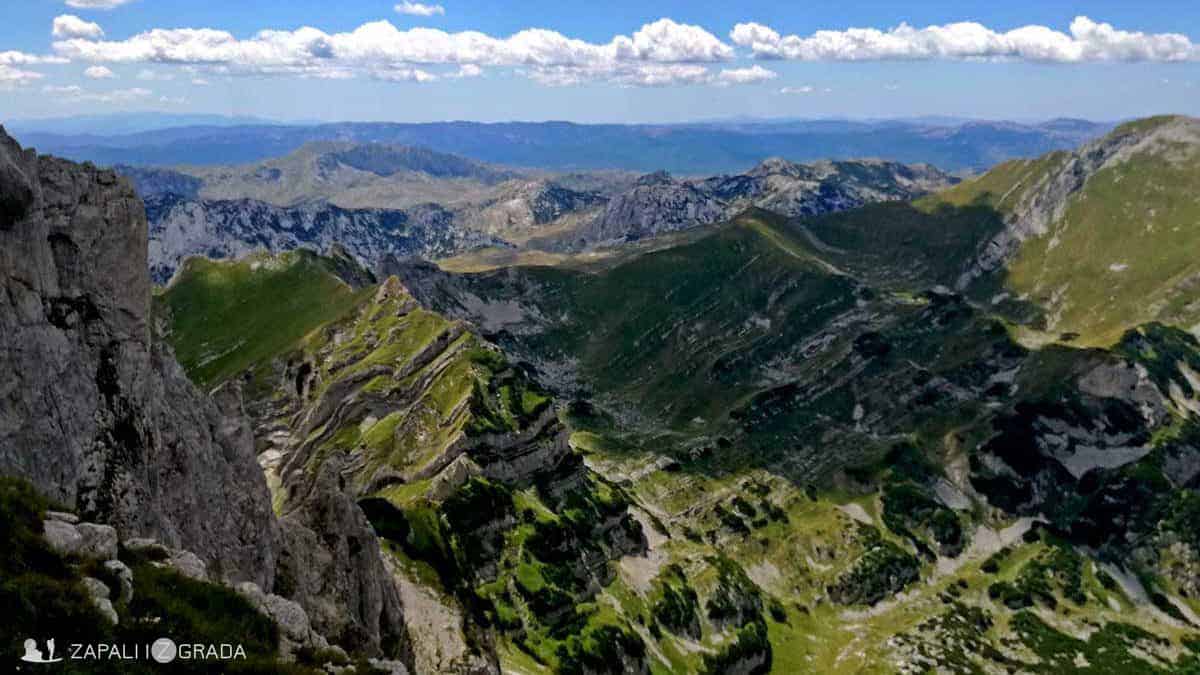 I was completely surprised by a large number of people I met as I was approaching the top. There was quite a variety – male, female, old, young, babies in carriages, some fully fit, some with bandages on the knees … As if we were on a promenade, instead of being at the height of 2500 m.
When we arrived at the bend from which Škrčka Lake can be seen, as if by command, we made a break. We had to collect the strength for the final climb, while absorbing all the luxuries of this lookout. It’s one of those that’s you might have been looking for years. 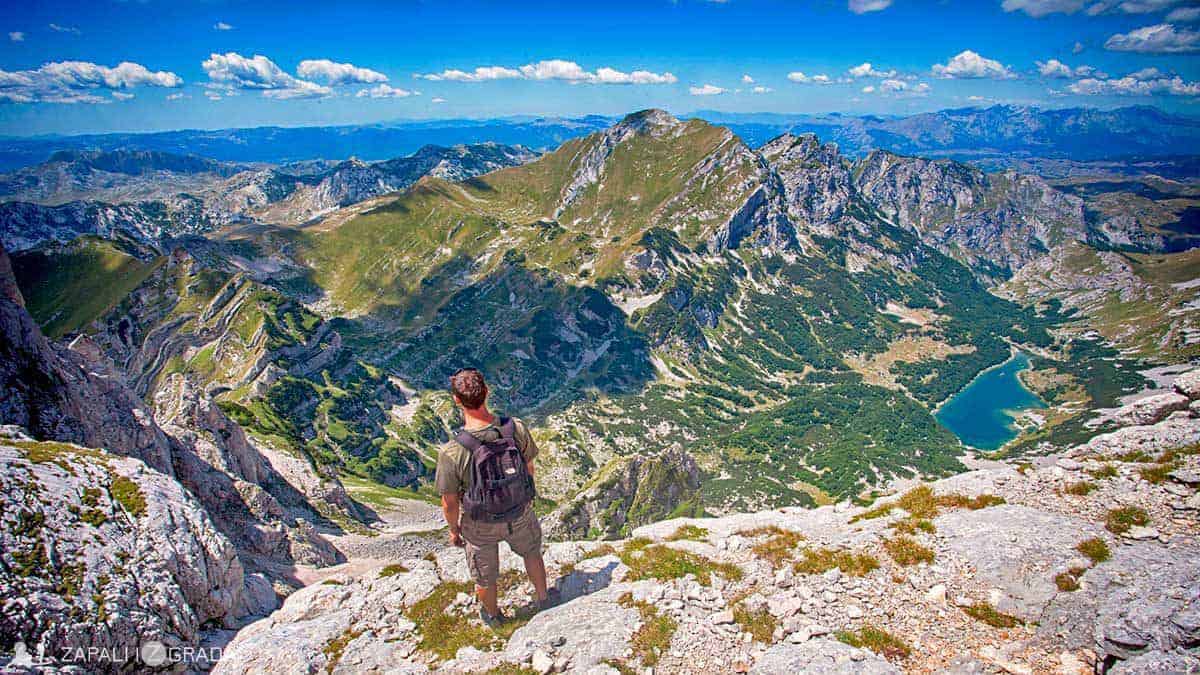 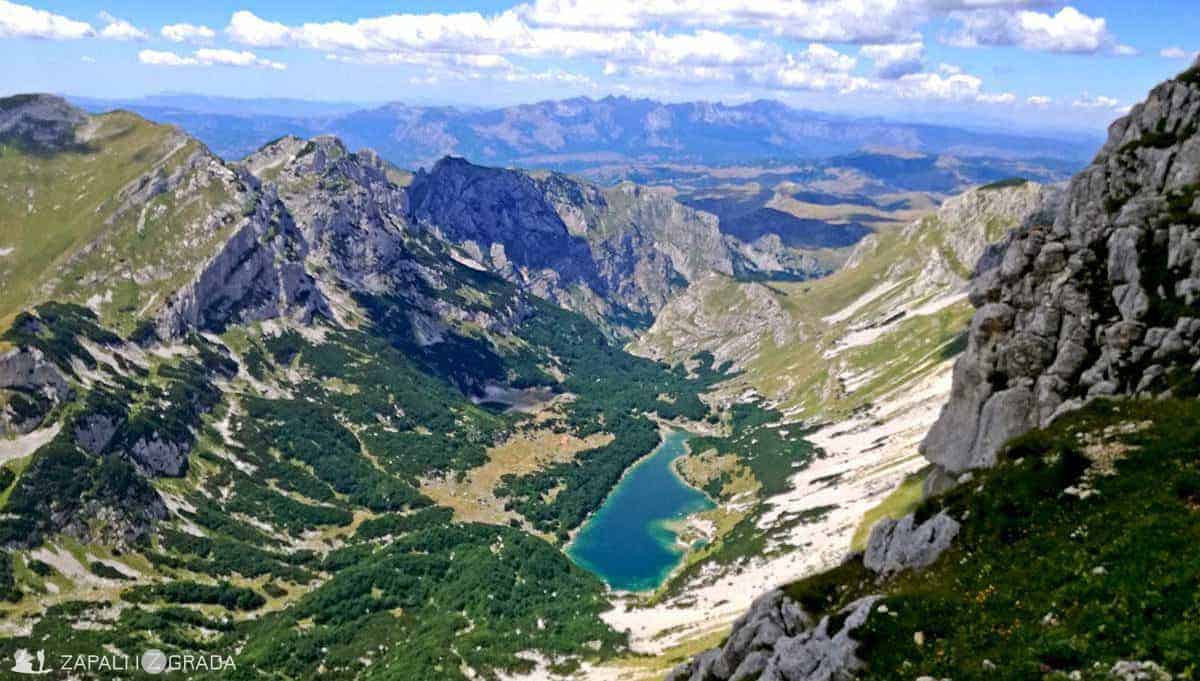 The ending is a story in itself and is served with a real crescendo. The distance is not large, but it is overcome by “scratching” (using all four) and using wild mountain goat paths, with the help of a cable. For those who are afraid of height, this stage is quite a bite. You need to be careful about this part, especially if a lot of other people are climbing or descending. There is not much room to bypass, and keep in mind that some are less willing and/or more scared. Still, in my opinion, with a little concertation it can go without problems. 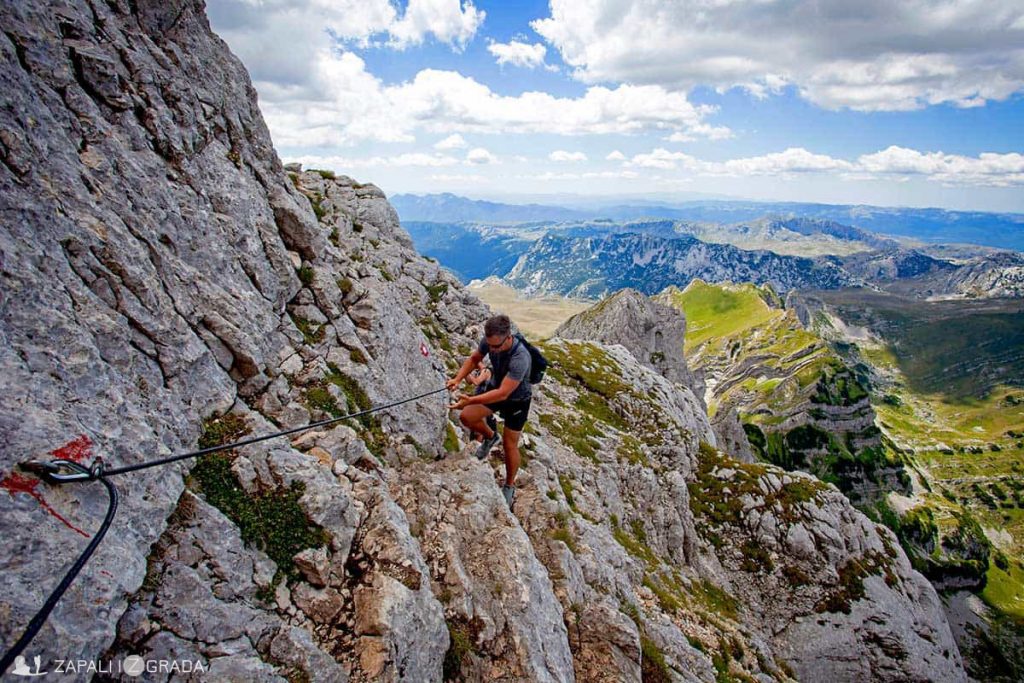 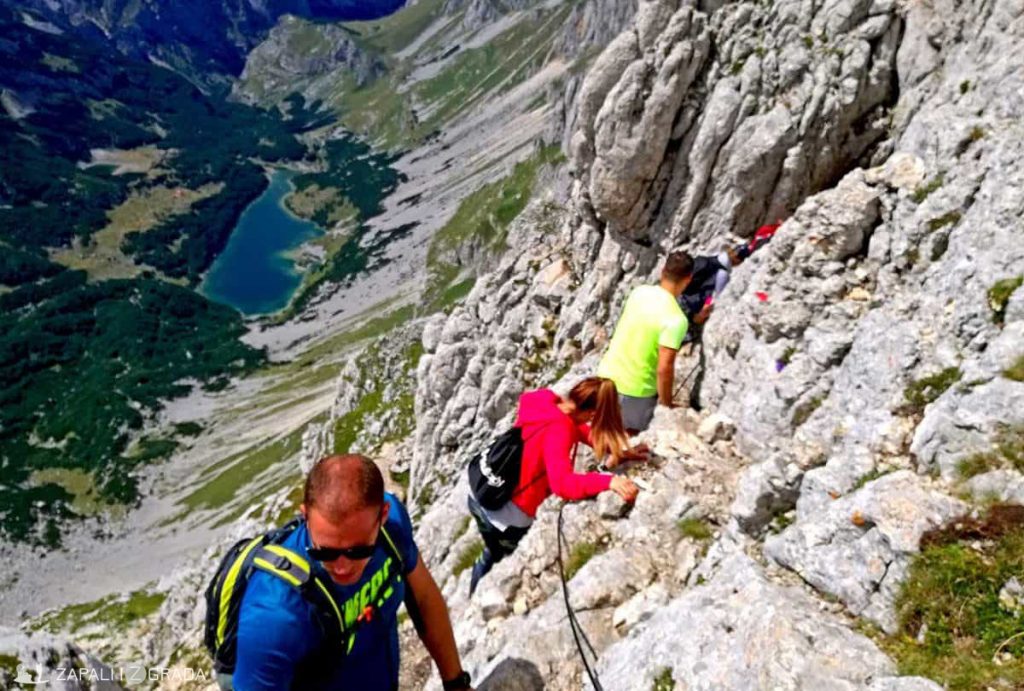 At the top – a crowd! An unexpectedly large number of people with a blissful smile trying to pack nirvana into photos. 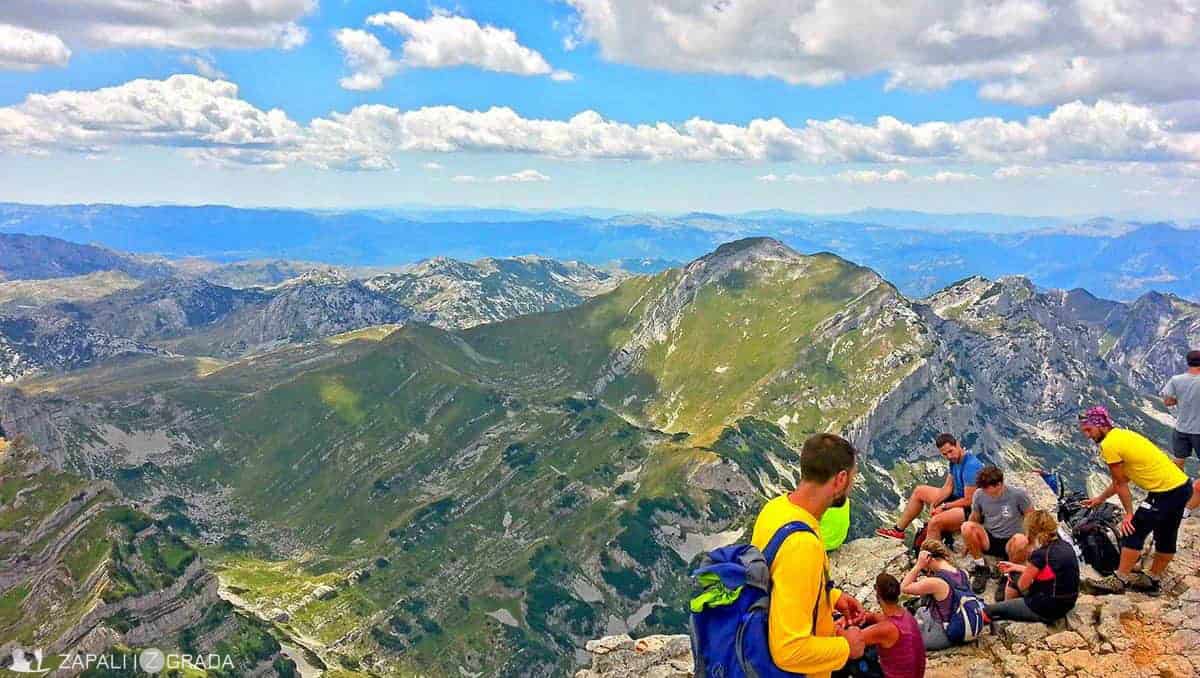 Watching the surrounding Montenegrin mountains and Durmitor massif as if laid out on the palm of your hand is really unforgettable, and it is a special experience to see two Škrčka lakes and the Black lake. 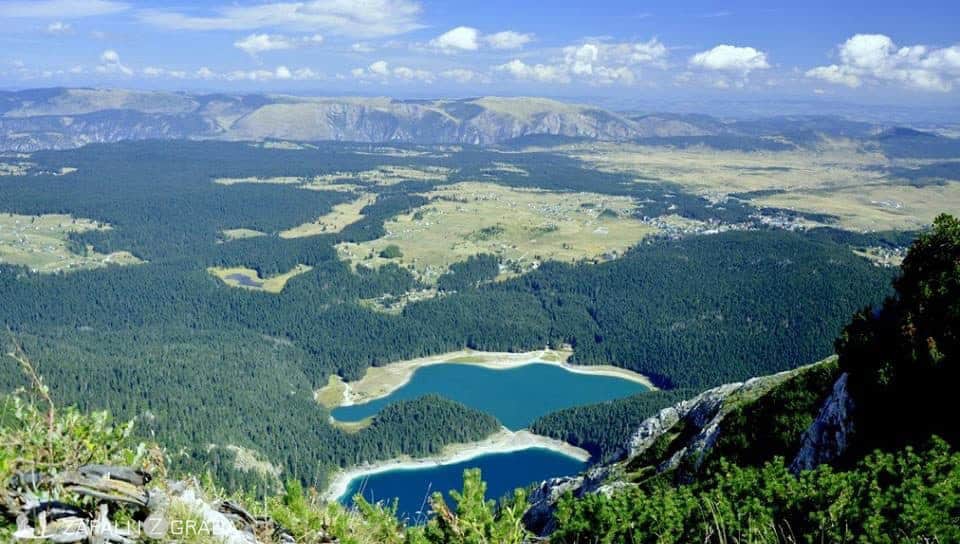 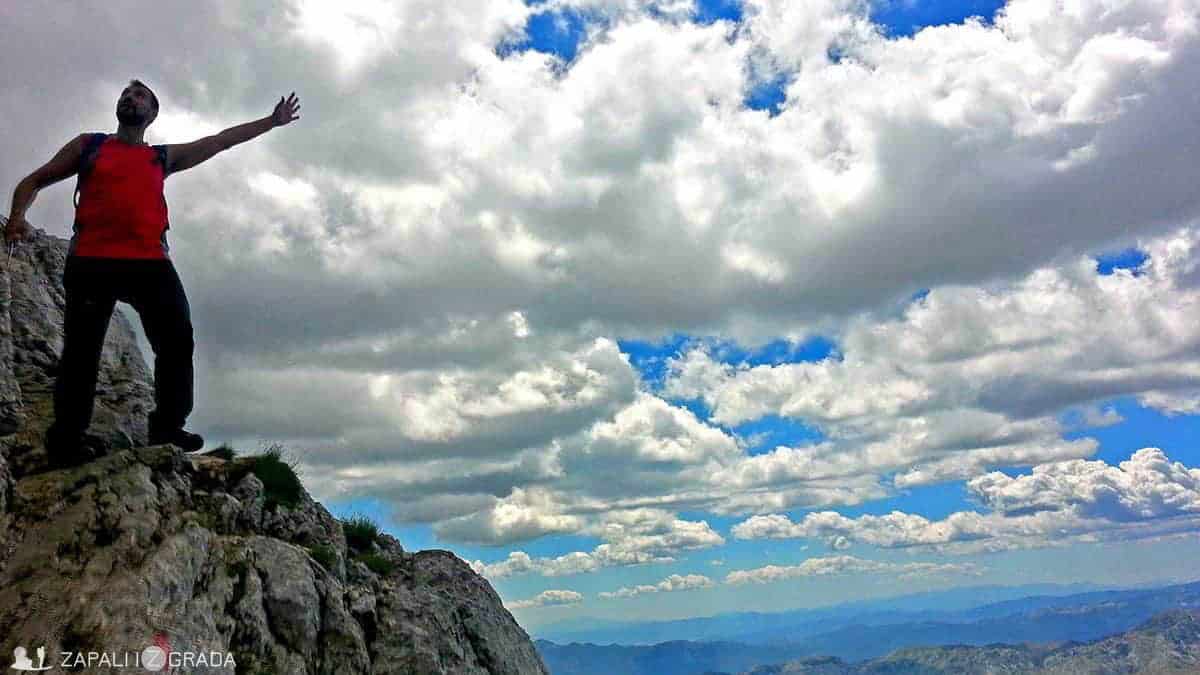 From this perspective, at 2523 m, it is easy to understand why Durmitor ice lakes are called “mountain eyes”. Next to a board with the name and height of the peak, there is also a notebook to write your impressions and a stamp to verify that you reached this destination on your hiking wish list. 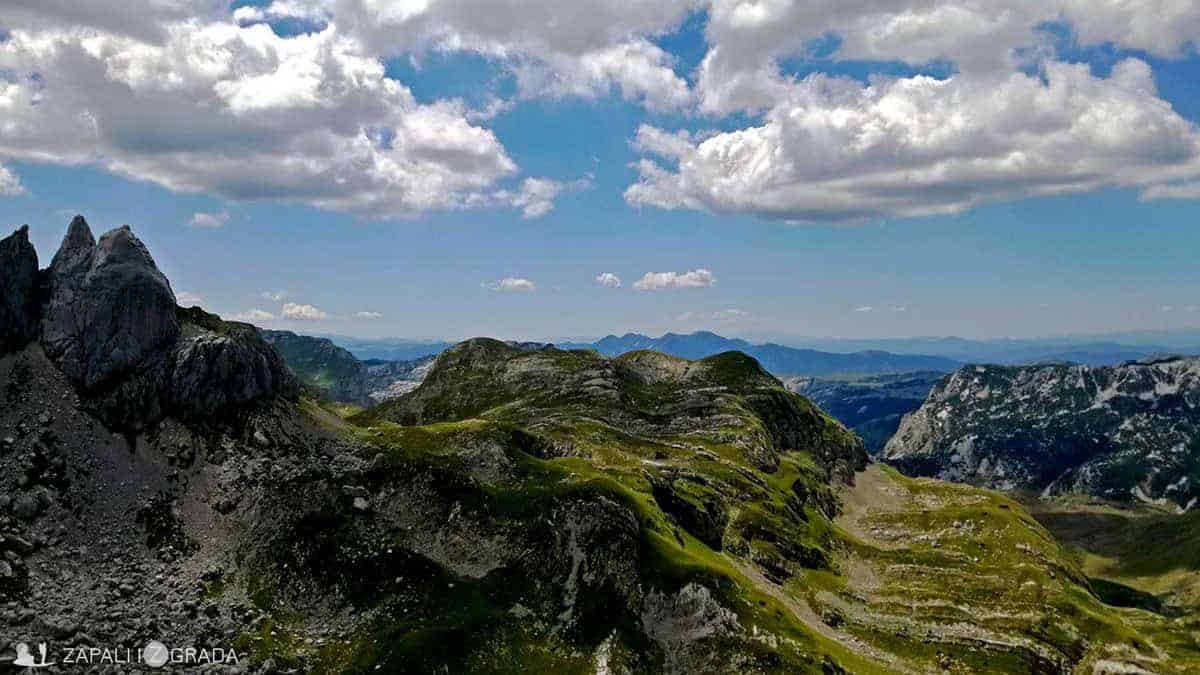 The return is via the same path to Sedlo. True, for those who managed to organize themselves differently and are in good physical form, there is also a way through the Ice cave that descends all the way to the Black Lake. We needed a little less than eight hours for this whole activity, including relaxed photo shooting, resting, enjoyment and chatting with other hikers. 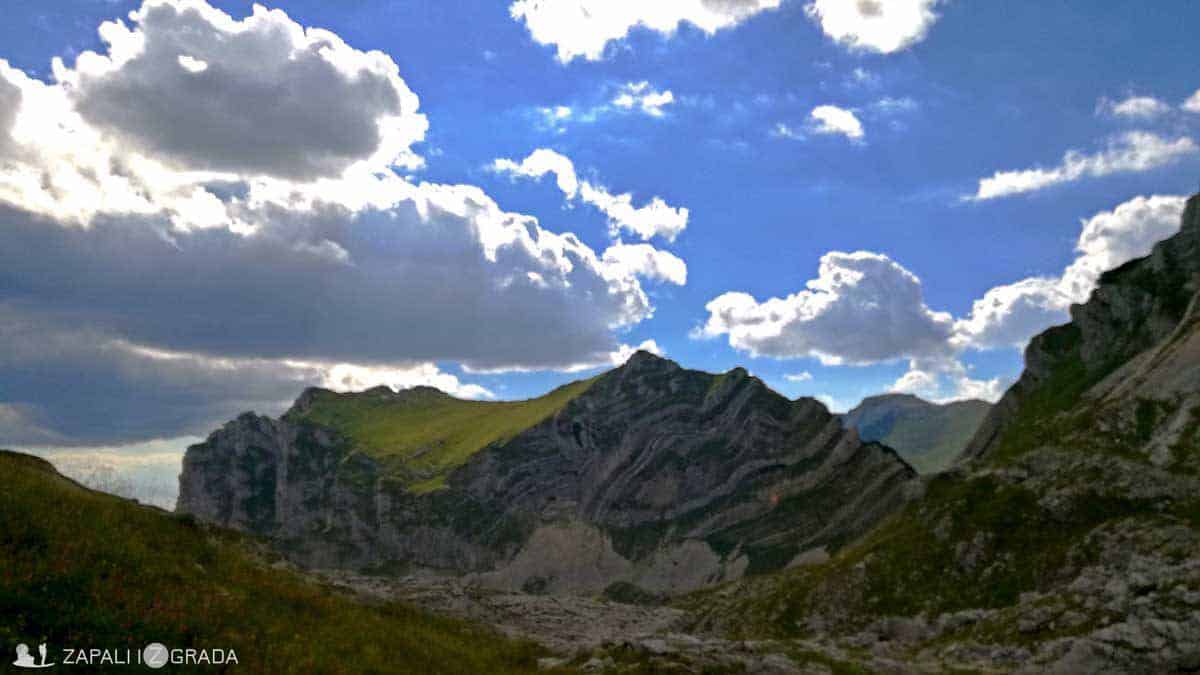 Quite exhausted by the heavy terrain and drenched by the July sun, we decided to revitalize a bit. So that comment from the beginning of our tour, that we would not know what to do after we finish this in 3 hours, became our inner joke. We had to gather strength, as we had a new challenge awaiting the next day – the Nevidio canyon.