After years of juggling leisure time with responsibilities, the river of life finally took me towards central Montenegro and the Morača Mountains, secluded, yet fated. I am sure that nobody will disagree with me when I say that this is a kind of hiking pilgrimage of the Balkans. At the very mention of it, the hearts of all the head-out-doorers beat faster.

Just to mention, this is one of the anthological tours left as an inheritance by the legendary Krsto Žižić, former president of the mountaineering society “Železničar”. 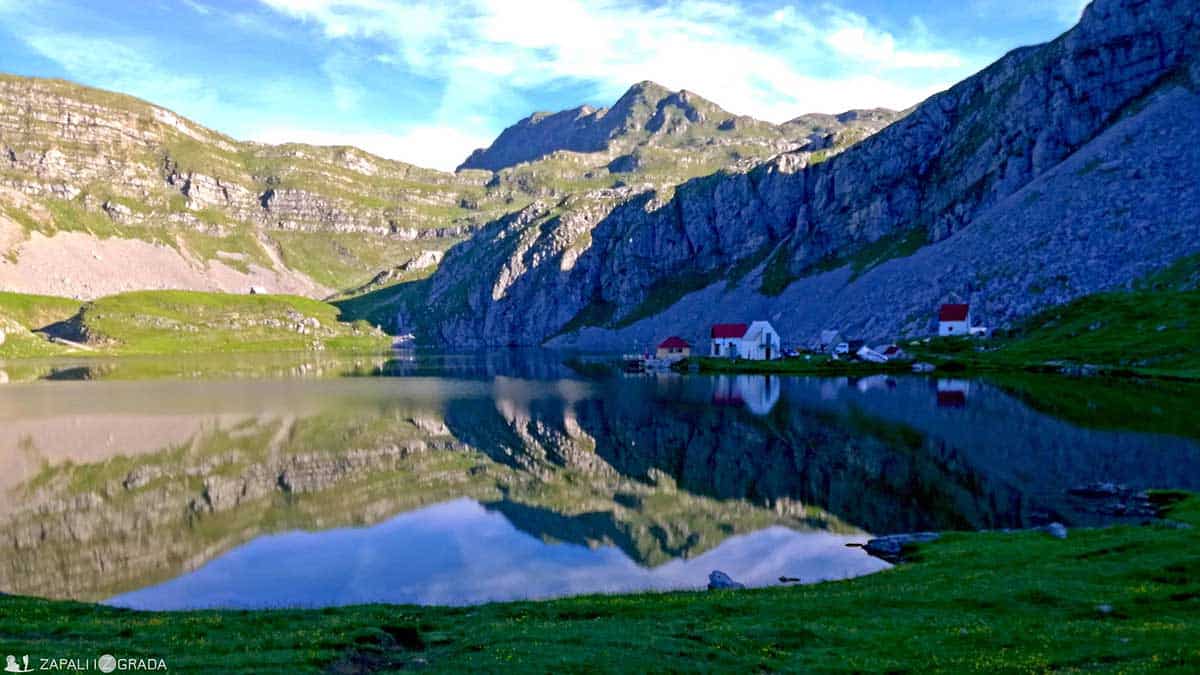 After an all-night ride, we arrive at the village of Gvozd, where our action starts with Zoran Vujošević Buca and Aleksandar Radovanović from KAUP (Club of Active Nature Enthusiasts). The plan is to completely give in to the scented pastures in a three-day hiking marathon, reach 2000-meter peaks, enjoy the katuns (shepherd’s summer abodes) and glacier lakes, and finally – as desserts are always served in the end – pass through one of the most beautiful canyons in the Balkans.

As we got out of the van, the Morača Mountains welcomed us. The harsh mountain air surrounded us, plunging irresistibly into our lungs. That first breath of air seemed to freeze time; a fresh bouquet, as pure as morning dew, made of flowers and the snow coming from cloud-surrounded peaks, suggested that an ancient world was hiding over there, and that we will shortly become part of it.

We crossed the pasture and a village road, towards the peaks that glanced at us over the horizon. Only later did I realize that the tour had a top-notch scenario and that each step was meant to intensify our excitement. 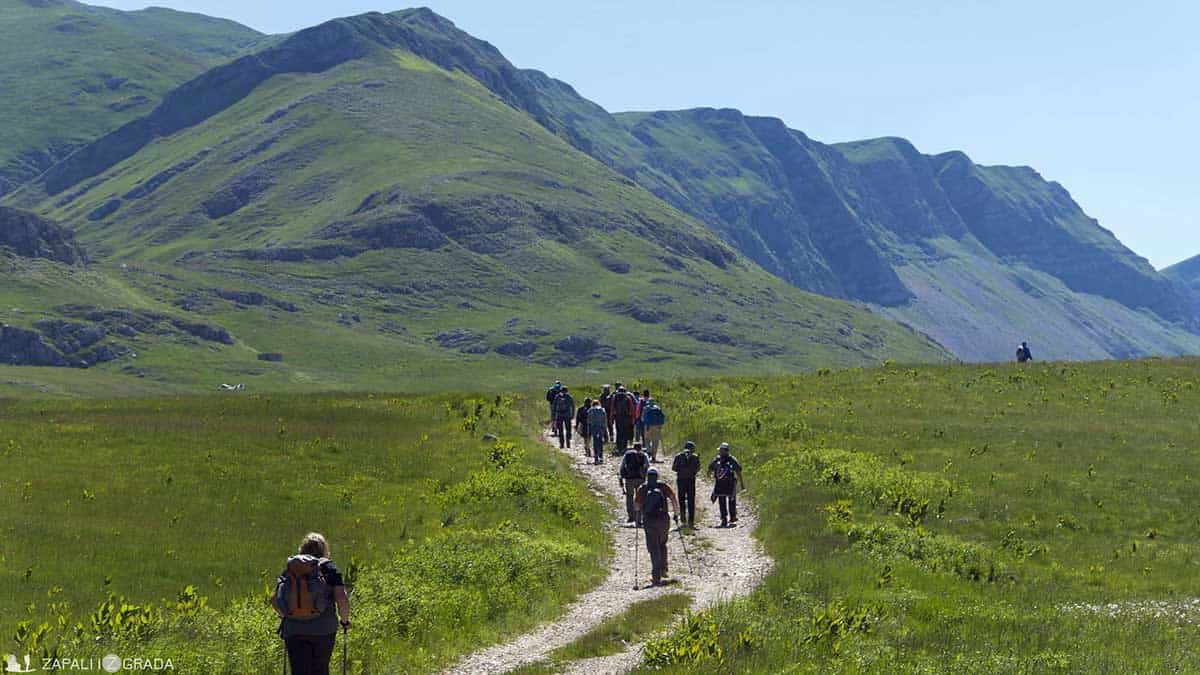 Since we traveled during an ideal period, in early June, we had the privilege of enjoying the widest range of mountain flowers. It seemed that they defied the ruthless surroundings with their color and unusual forms. In particular, the golden yellow Albanian lily stood out with grace. 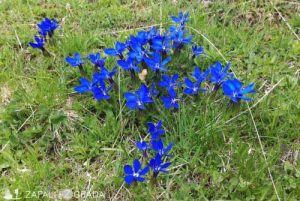 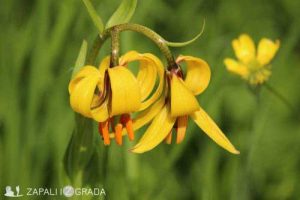 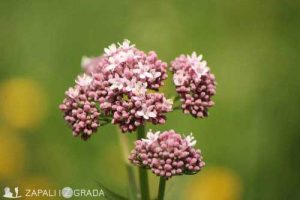 Soon we arrived at the foot of the Big and Small Žurim – as if we stepped into a part of the planet sheltered from the view of the busy population. Conquering the higher, but also less steep of the two Žurims is averagely demanding, although with a constant climb of 300 meters above sea level. Still, the height and the burning sun were taking their toll. While I was resting in the shade, the silence and tranquility of a big rock, taking a break and enjoying the snow peaks in front of me, my gaze was captivated by a herd of wild horses. 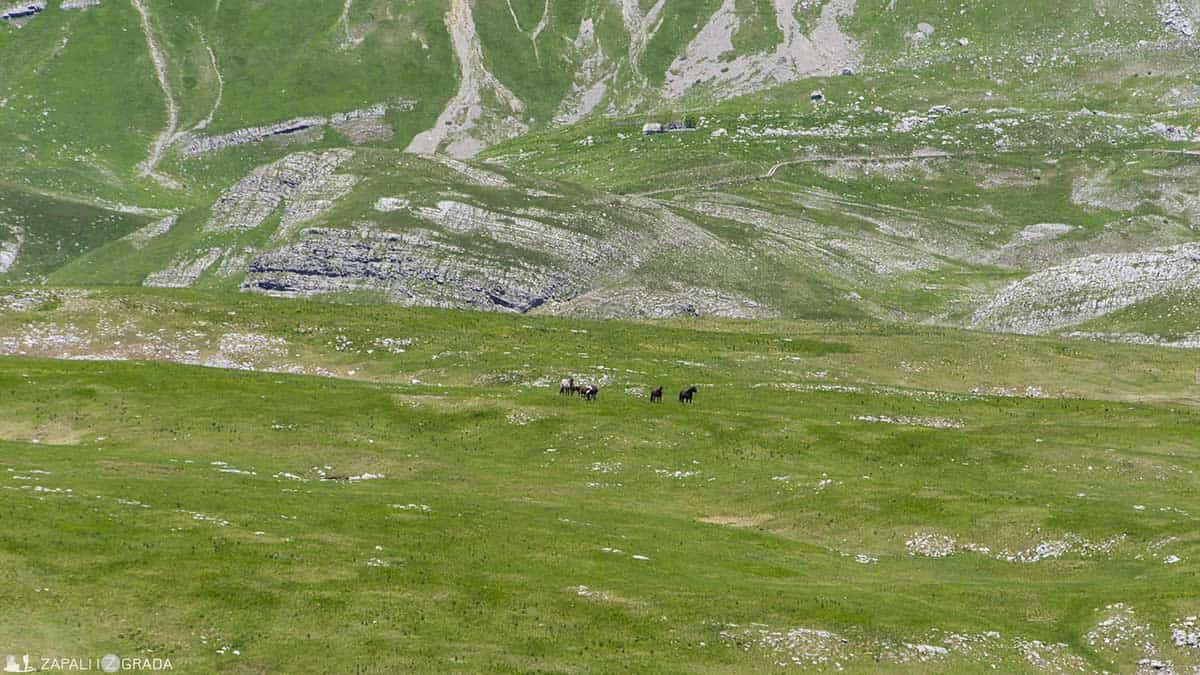 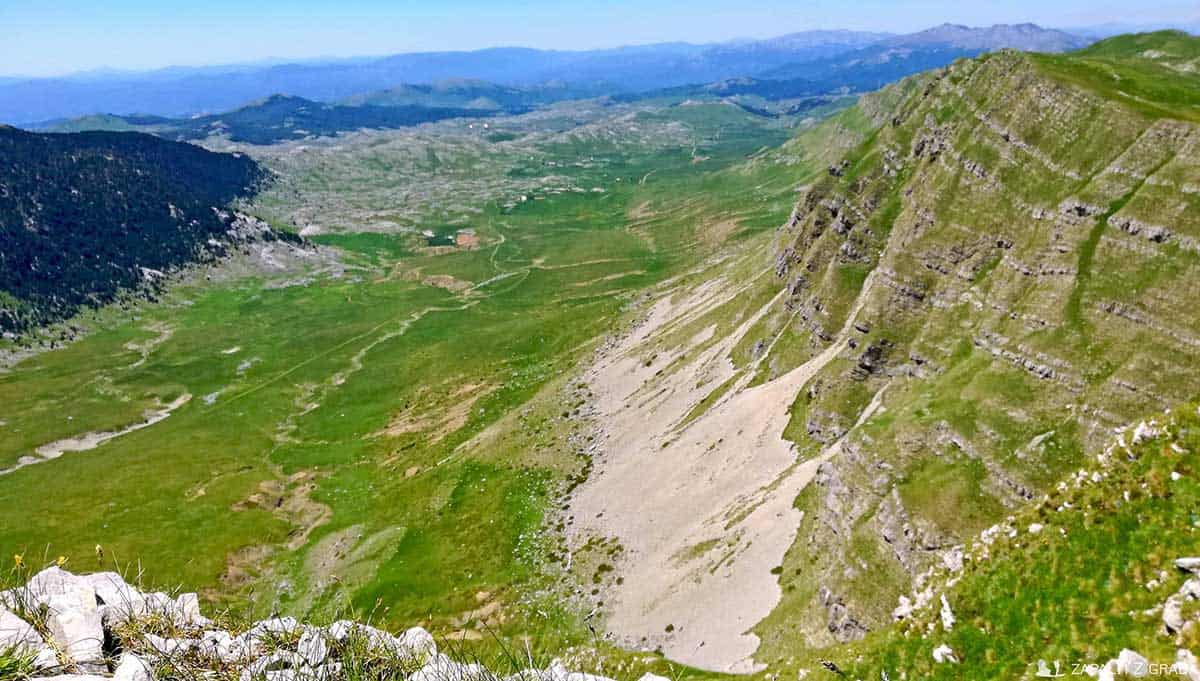 As I watched them disappear in the distance, I reached 2035 meters. At the top, apart from a cute little inauguration of people who first crossed 2000 meters, I admirably watched Durmitor and Prokletije on the horizon and the surrounding peaks of Morača, embracing the valley deep below, with little katun “replicas”. 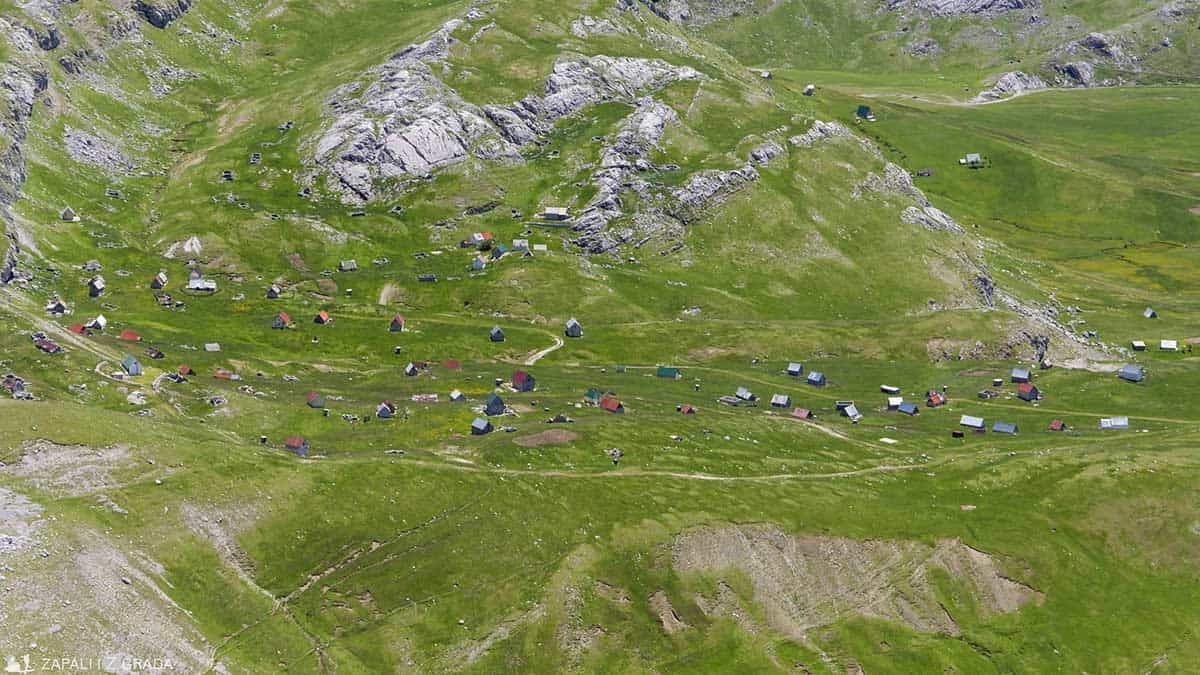 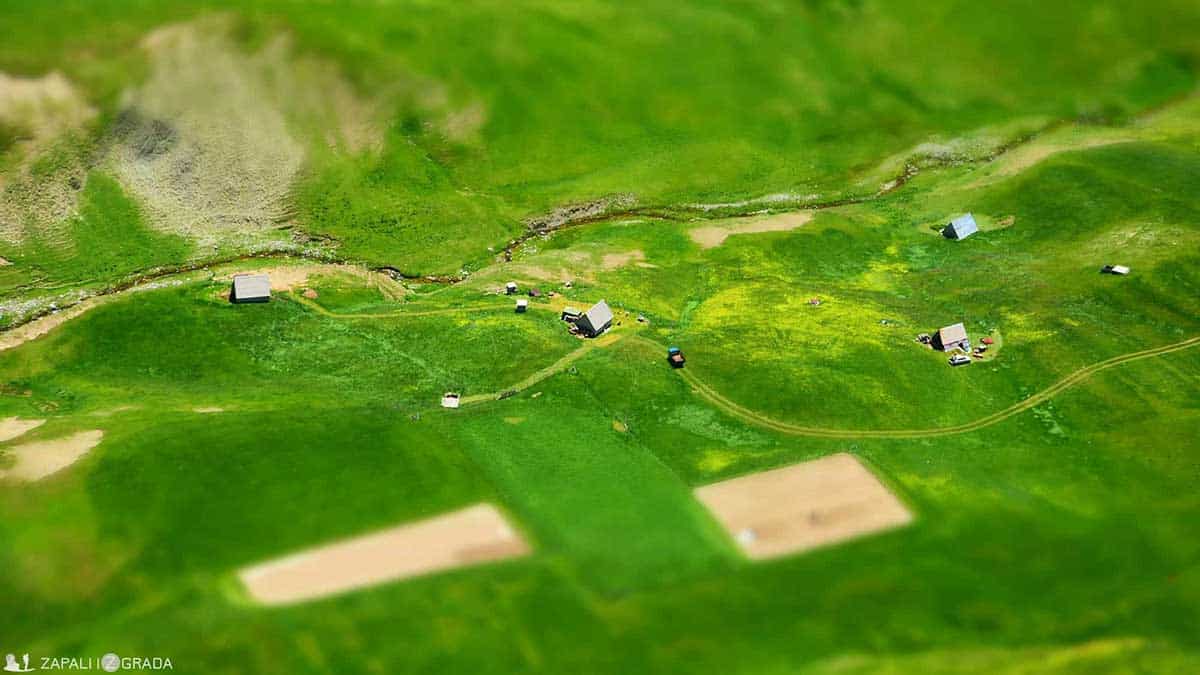 The powerful Montenegrin mountains are a shock to all the senses. Above the enormous green spaces rise the bare peaks, as sharp as blades. Raw, wild and inaccessible, and yet so beautiful and desirable, they go under the skin and inject you with the strength to go on. 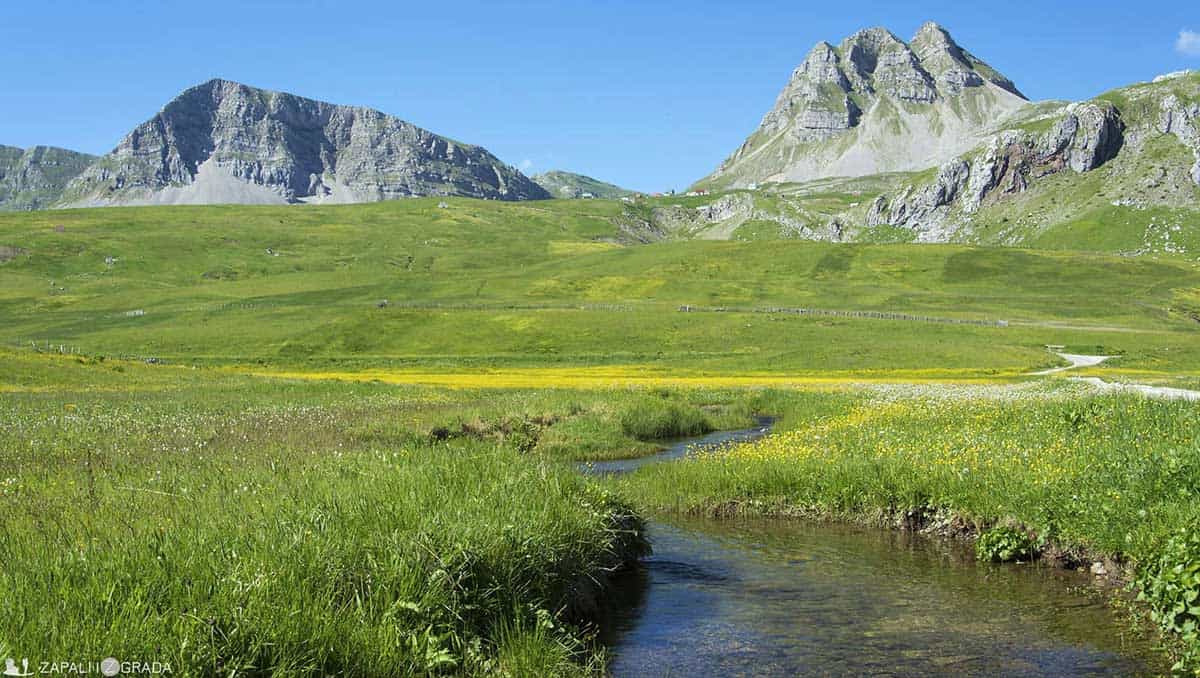 As we go downhill to Bojovića Bare and our van, our time passes in beautiful sightseeing and scattered katuns over lush meadows covered with white nets of daffodils. The streams and waterfalls which we encounter only complement the already striking landscapes. 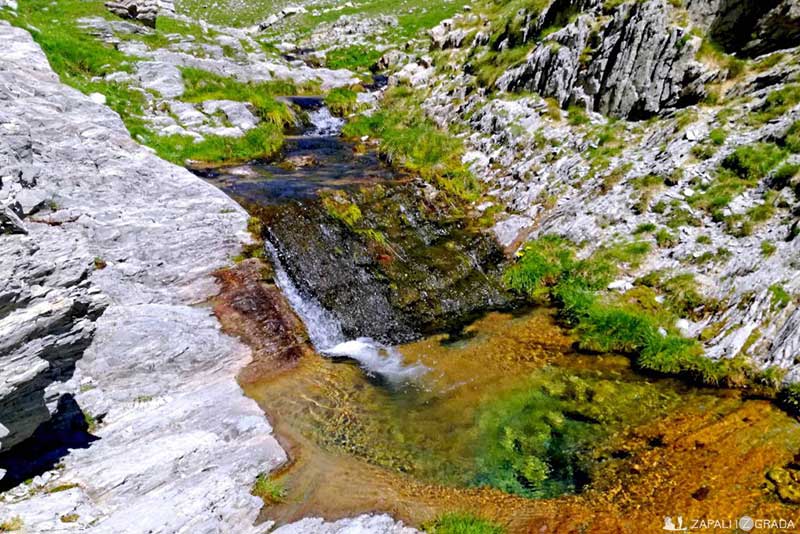 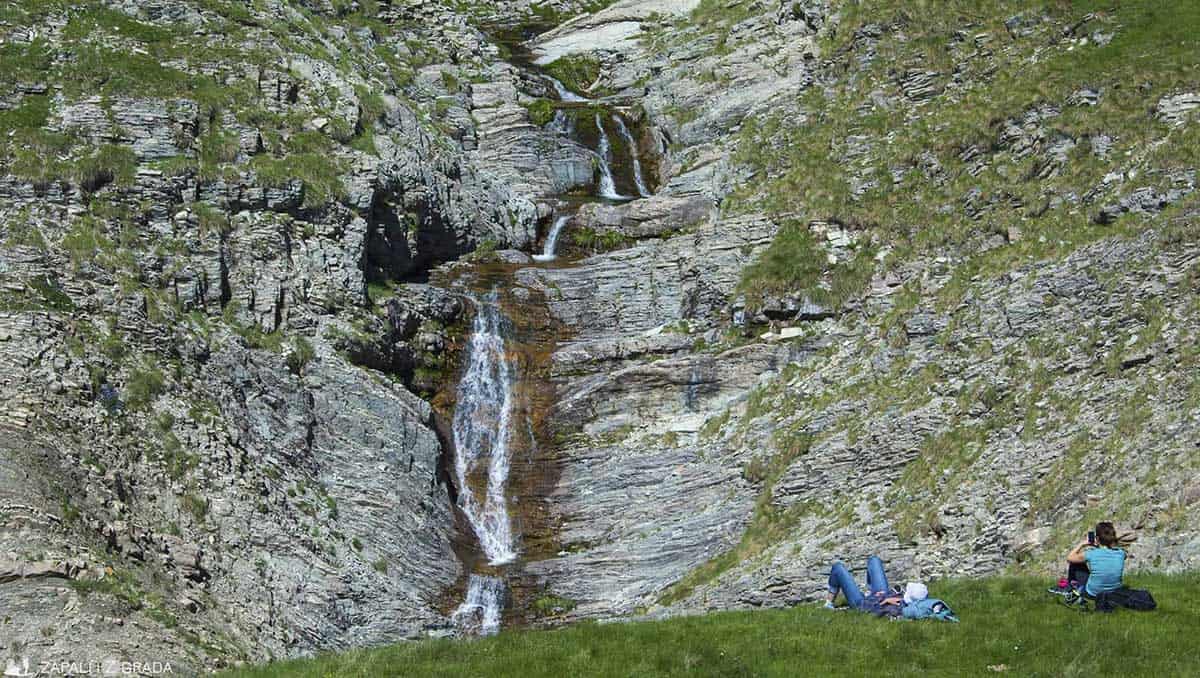 We complete the 17 kilometers distance and 700 meters height difference before we reach the van. After getting refreshed with fresh mountain water, but also coffee and brandy, which arrived as a gift from the hospitable hostess in the katun, we move on. After 20 minutes, we arrive at the Captain’s Lake, a kind of gathering center for all adventurers. 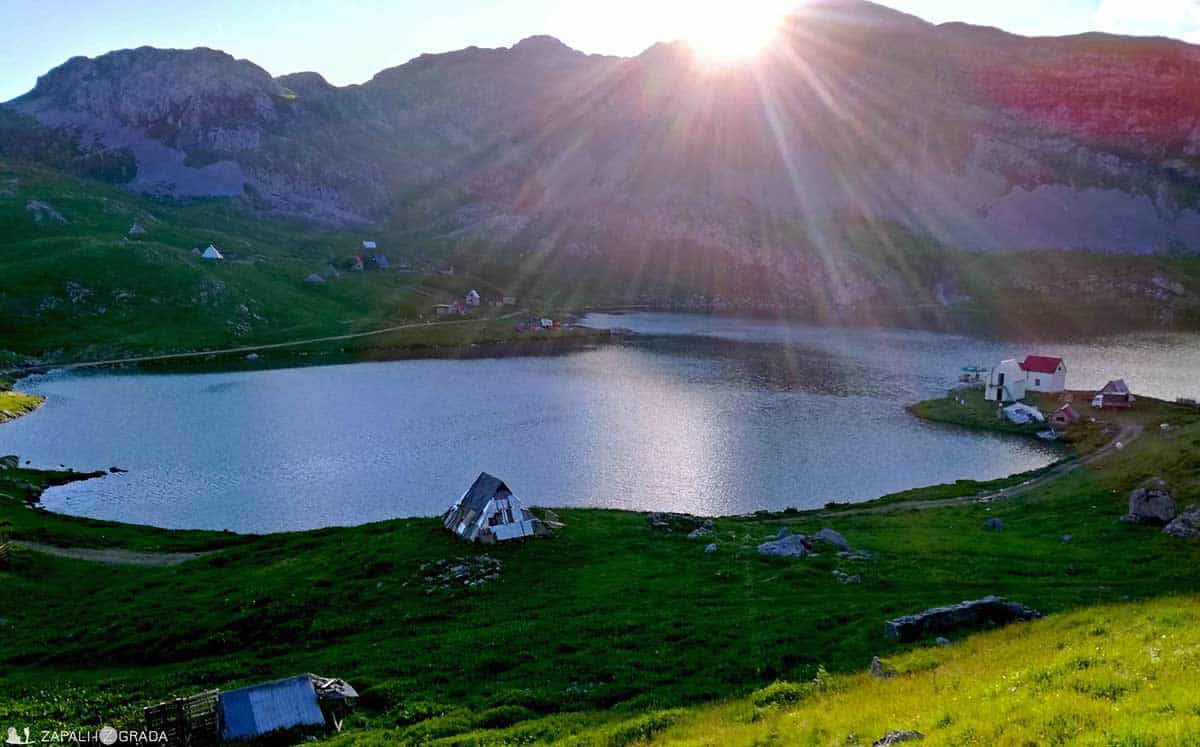 This beautiful lake is the starting point to most of the surrounding peaks, and as an invisible elastic band, it launches hikers, then pulls them back again. Everyone heaves sighs of delight, not only those who see it for the first time, and succumb to the surreally beautiful view of the peaks and the sky on its smooth surface. It’s a glacial lake, 200 meters wide, 480 meters long and 37 meters deep, and trout enjoys its cold vastness. 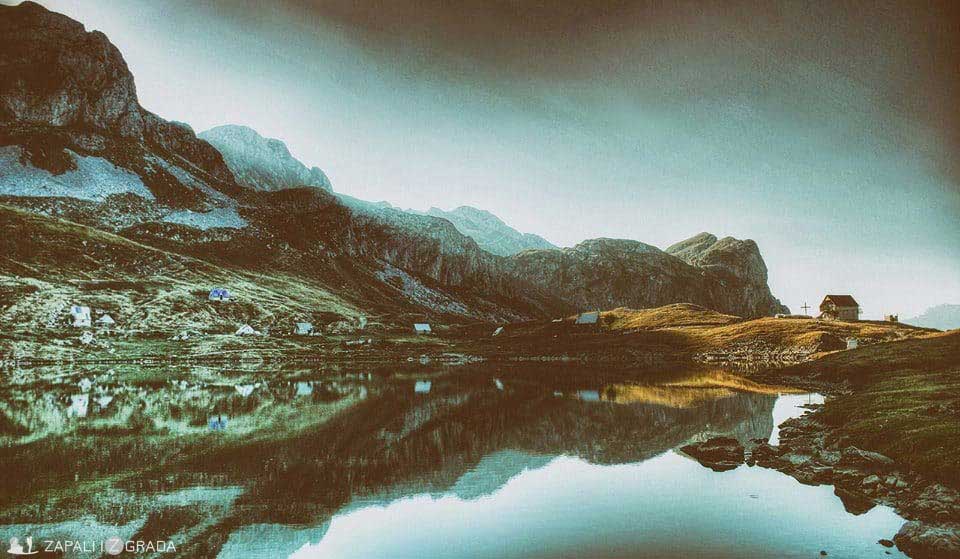 It seems that there are no lakes without legends in Montenegro, so this was named after the famous captain Mušović. Apart from being featured in a song by Rambo Amadeus, the captain is a historical figure and only a small part of the turbulent history kept by these parts as reminders of numerous battles between the Ottomans and the Serbs.

“In the area of today’s lake there was the katun of captain Mušović. Above it, in the rocky walls, there was a secret water spring used only by fairies. They would open the spring at night and close it after bathing. Once, a fairy was careless and forgot to close the spring, and it flooded captain Mušović’s katun. After that, the fairies moved the spring and its waters continued to power the lake, so the lake got its name.”

At 1678 meters, on the shore of the clear green lake, the Minić family offers refreshment and accommodation in the katun. A limited infrastructure, without electricity and running water, is compensated with the cordiality and flexibility of this family, and the beautiful nature that surrounds them. They have coffee, beer, brandy, eggs, fries, whipped cream and polenta on the menu. With first-class layered cheese, quite enough! 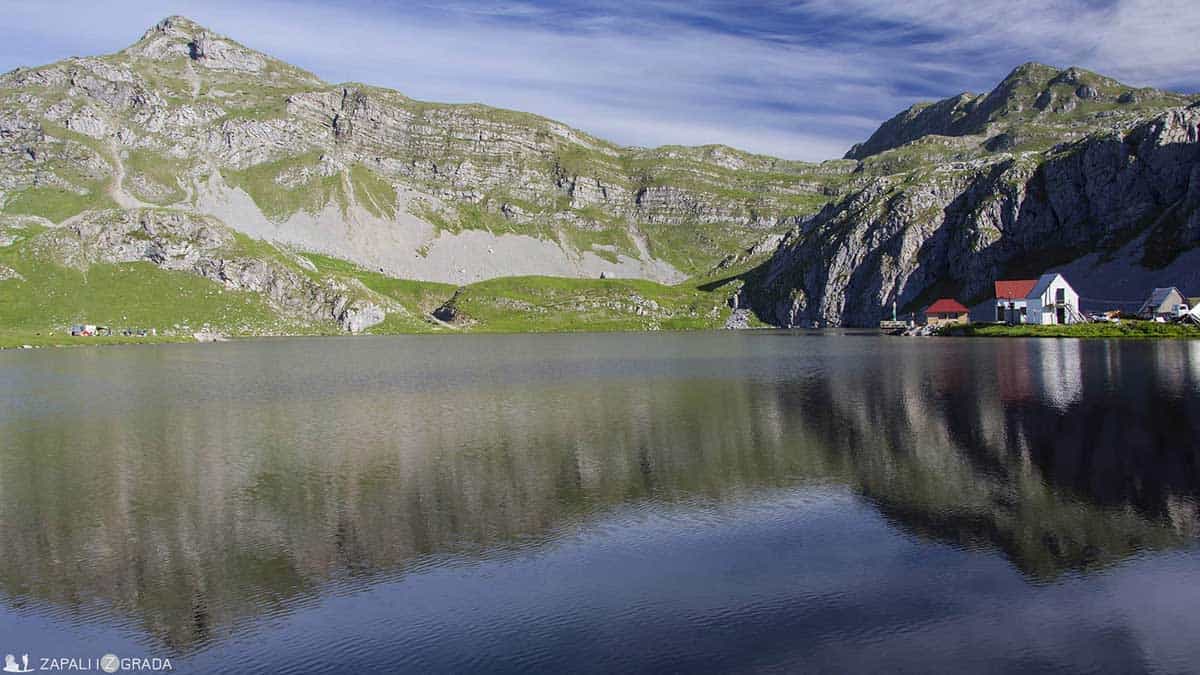 It was interesting to notice that there were no beginners among the people from our group, only devotees who use their hiking experience and mountaineering code of conduct to cross half of Montenegro in search of scenes that energize the soul. We quickly “popped in” and it seemed like we knew one another since long ago, so I felt privileged that I was part of the expedition from which you could hear and learn many interesting things. 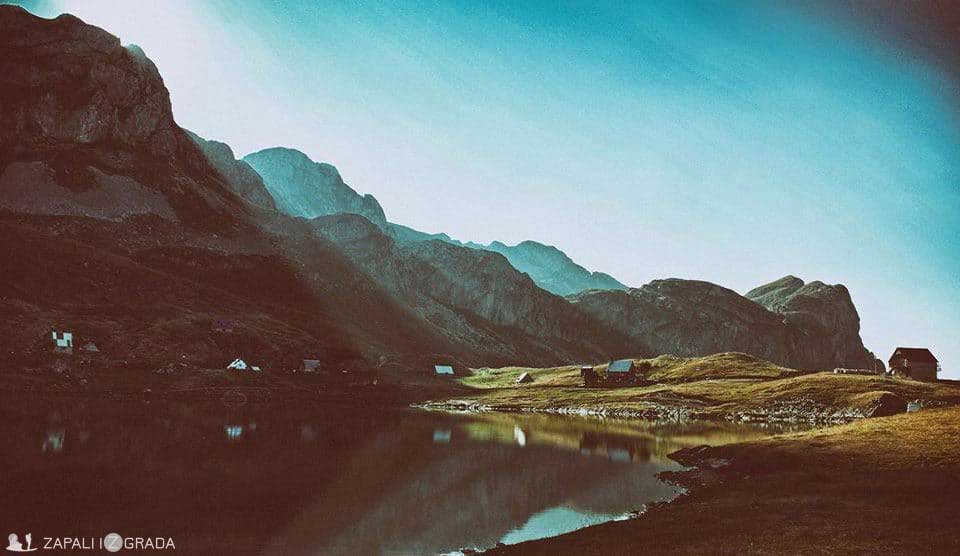 It should be noted that in the mountains around the lake there are no marked hiking trails. In fact, most of the massif does not have any trails, still it is mostly passable and the terrain is quite visible and easy to orientate. After sleeping in the katun and tents, and having an early coffee and breakfast, we went on. The path led us uphill from the katun, and through the characteristic areas we quickly arrived to another hidden pearl, to Manito or Brnjičko lake. Hidden in the rocky karst, this blue lake attracts everyone’s attention and we all tried to immortalize the picture in front of us. 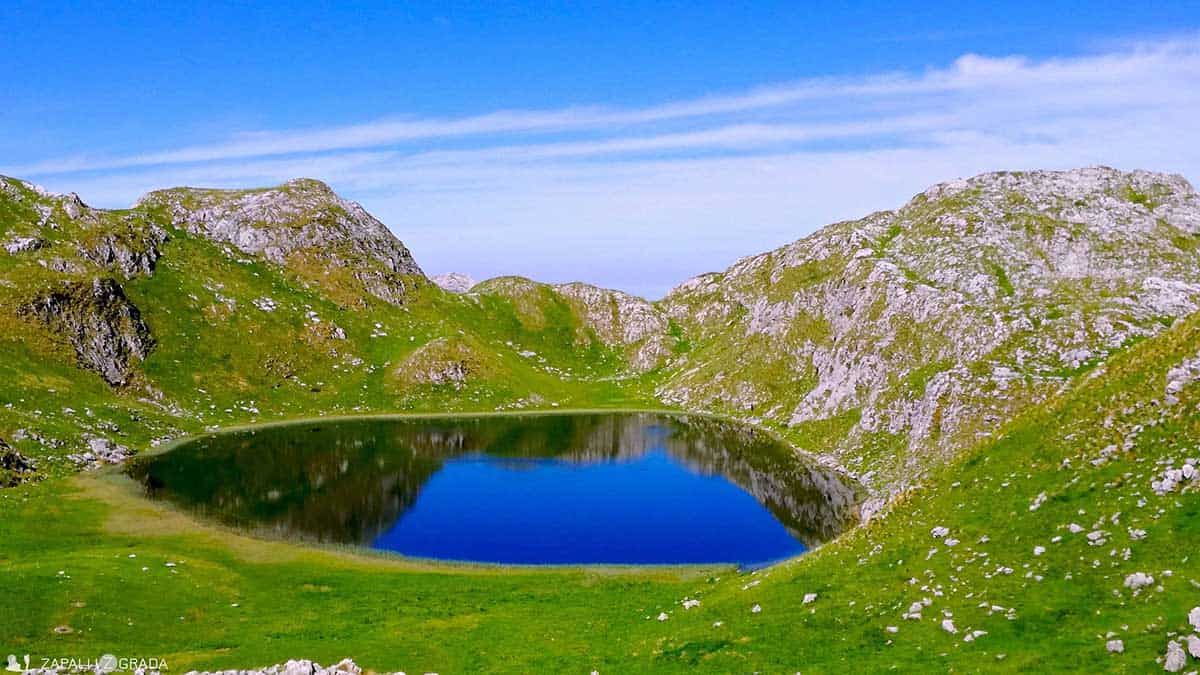 “Once upon a time, there was a mare in these parts, when the winged horse Pegasus came to the lake and leaped at her. She brought into the world a little colt, who inherited beauty from his father, but not the ability to fly. One day, while the colt was on the cliffs above the lake, he saw his winged father fly and tried the same thing. Unfortunately, he fell from the cliff and drowned in the lake, and from that time the lake was called Brnjičko.” 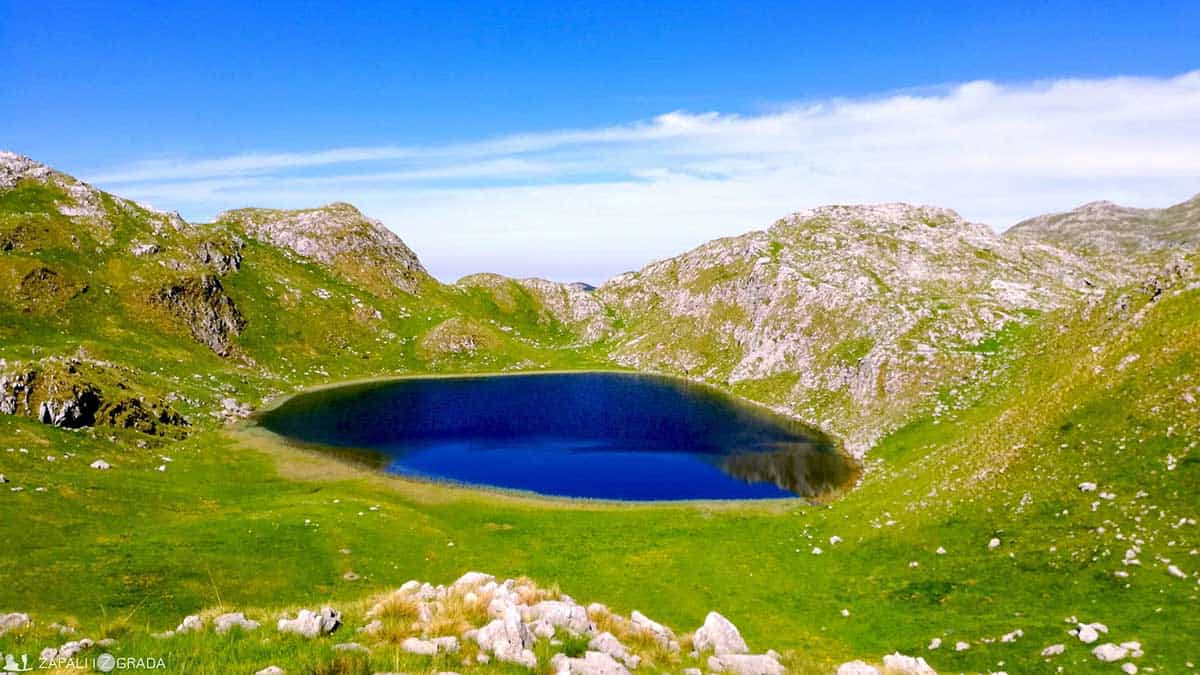 Those, whose imagination does not wander as free as the wild horses, claim that the name was given after the surrounding region Brnik. As we continue to the top of Stožac, we discover a number of lookouts, each of them asking for its own bit of attention. Of course, the most photogenic is the one from which you can see both lakes, better known as the two mountain eyes. 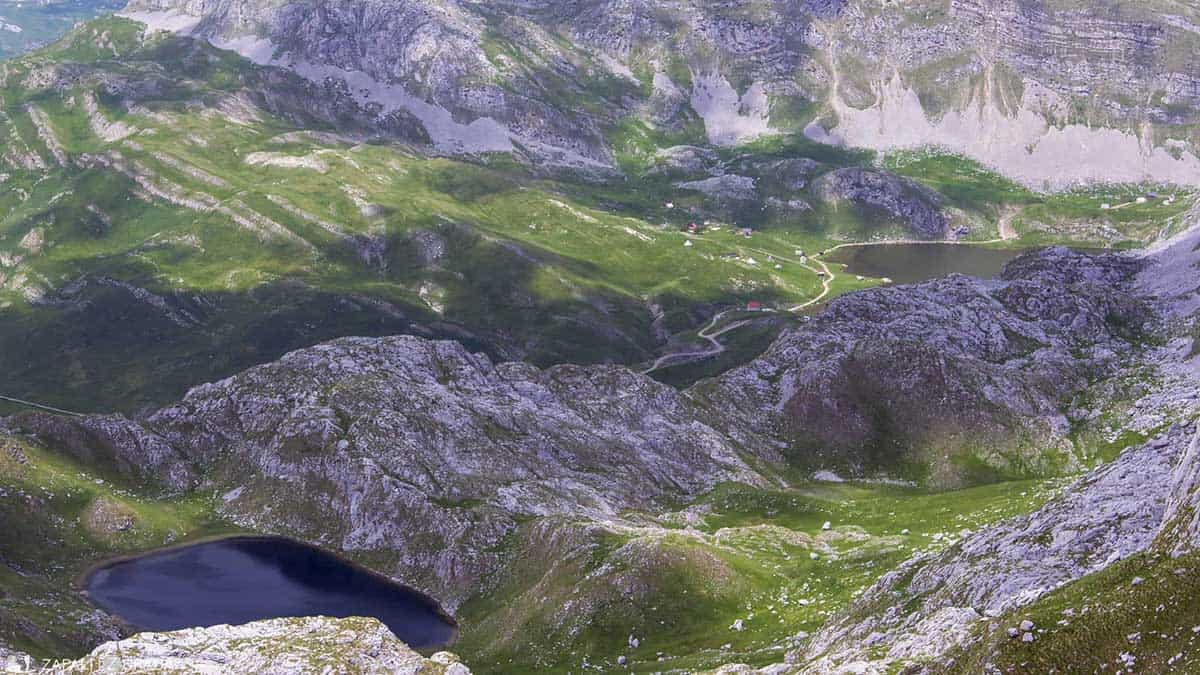 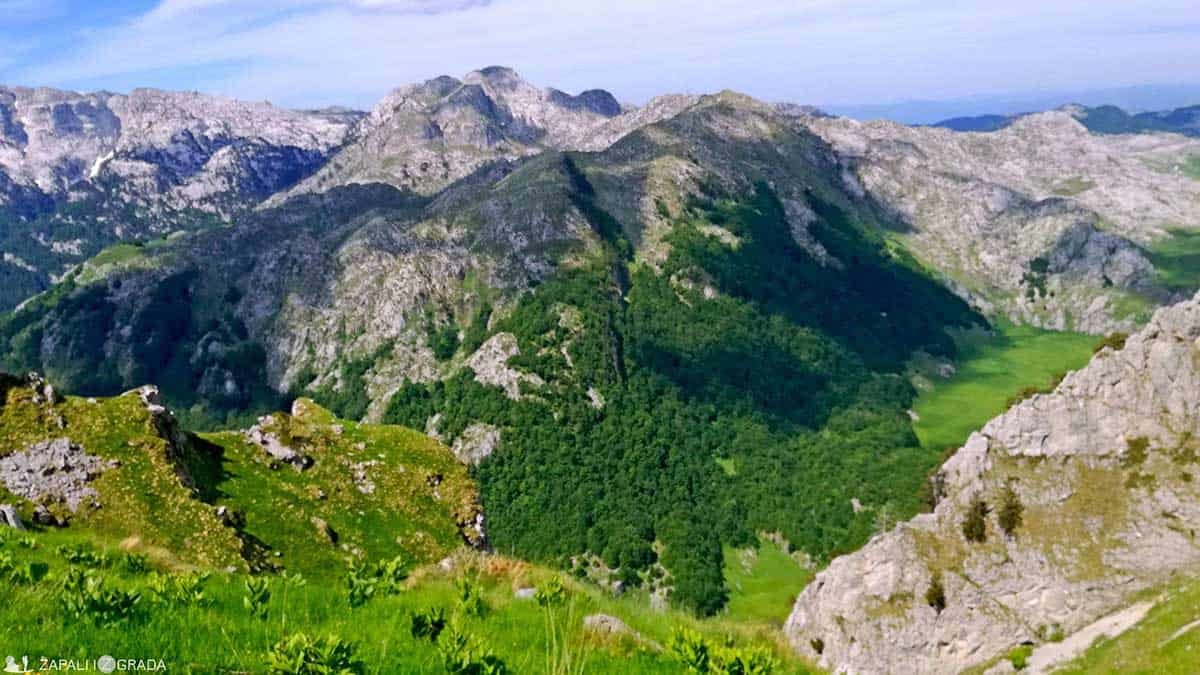 The peak Stožac, with its 2141 meters of height, provides a spectacular view of almost the whole of Montenegro. As the fascinating scene completely captured me, the break seemed not long enough. But we had a lot more in plan and had to move on. 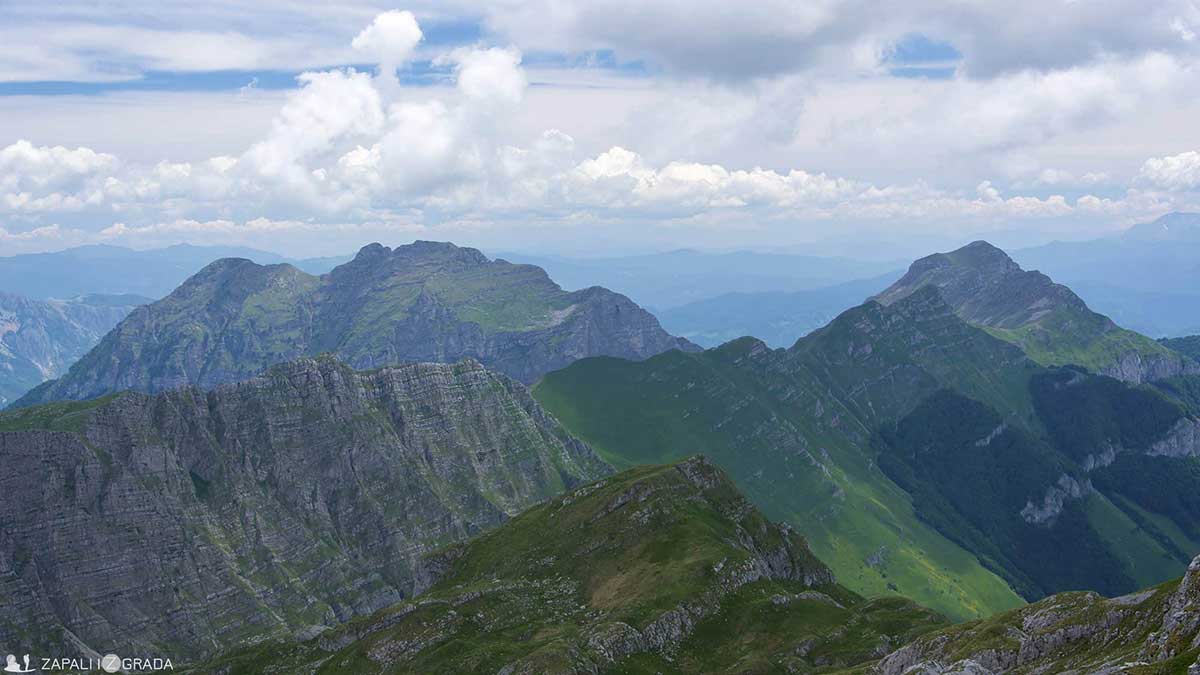 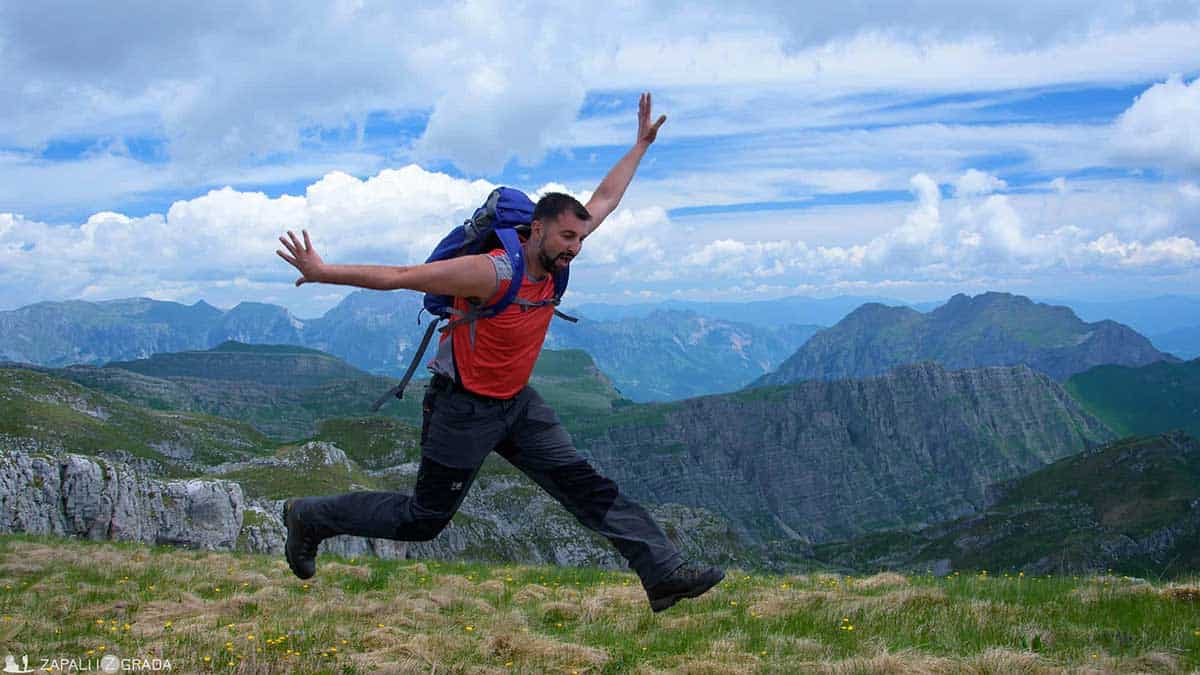 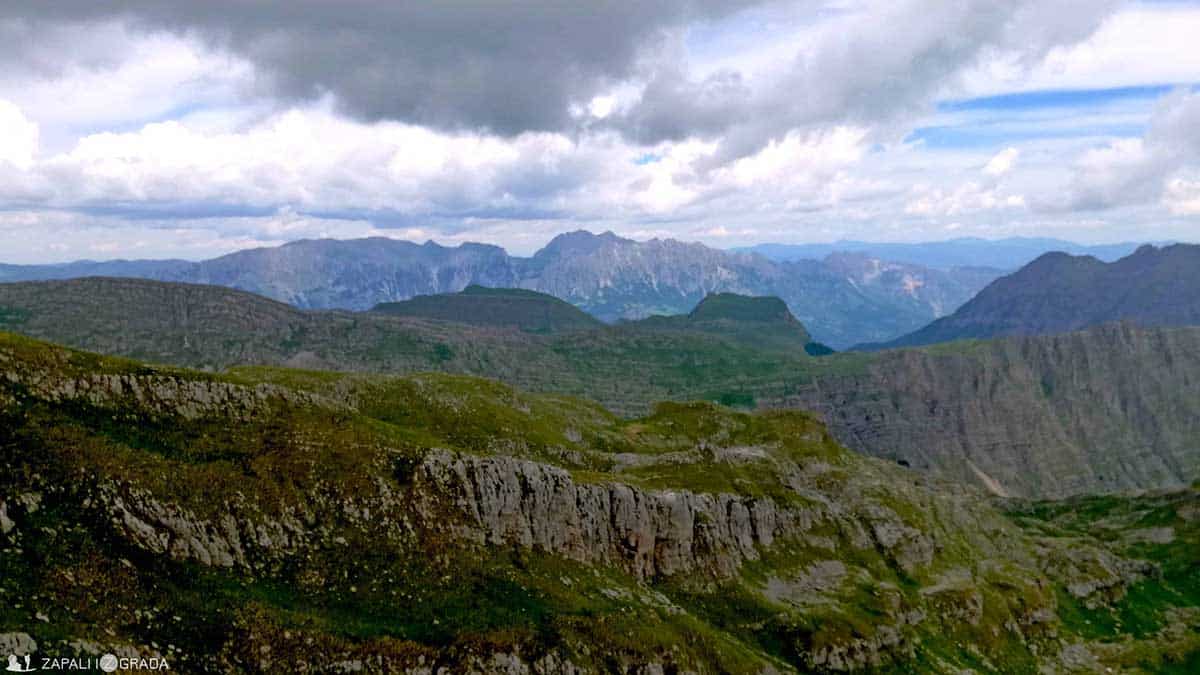 Down to Captain’s lake we descended through Radojeva prodol and Suvi Vrh, passing through the blooming slopes. The remaining snow deposits reminded us of childhood, so we had some snowballing.
From the lake we started what seemed like an endless descent. The village road led through the forest, one curve after another. 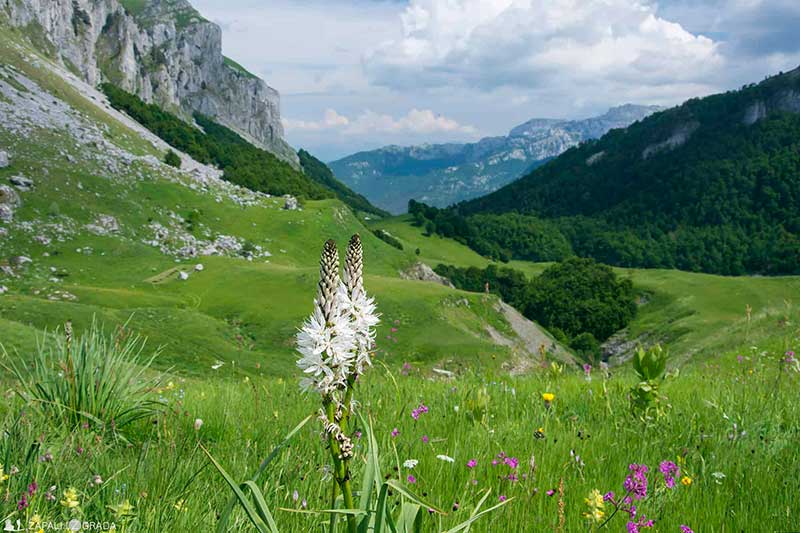 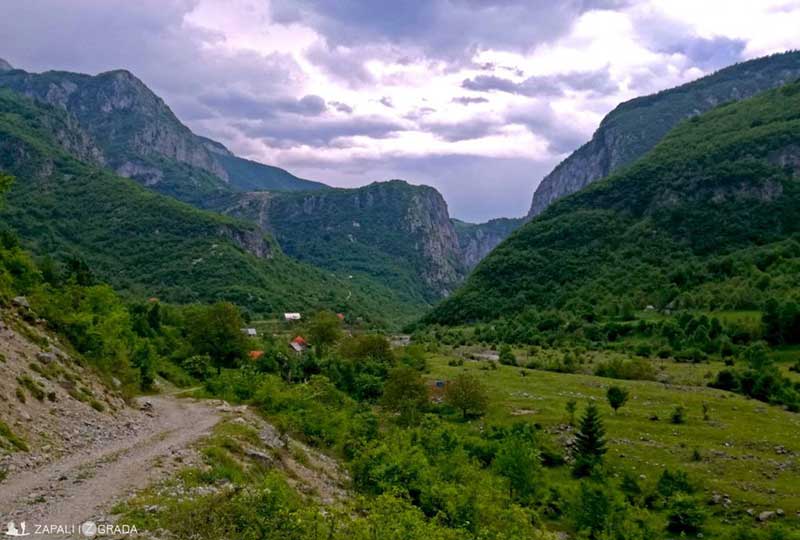 As the feeling of wandering through the wilderness of Montenegro was flowing within me and provided an incredible mixed feeling of adventure, freedom and unpredictability, the outlines of Velje Duboko were visible and the goal was at hand. After 18 kilometers and 1500 meters downhill, I enter this secluded and hospitable mountain village, where time has long stopped and which will provide us shelter after a busy day.