The second morning of our expedition to central Montenegro found me on the floor of the classroom where we all slept in sacks, packed like sardines. Perhaps, in some other circumstances, this night would be remembered as uncomfortable, but not this time. On that day, in anticipation of one of the most beautiful canyons of the Balkans, nothing could disrupt a good atmosphere. With a smile on our faces we did our morning routines and set the classroom back to its original state, so that the next day Jelena, the best and only pupil of that elementary school, can continue her education. 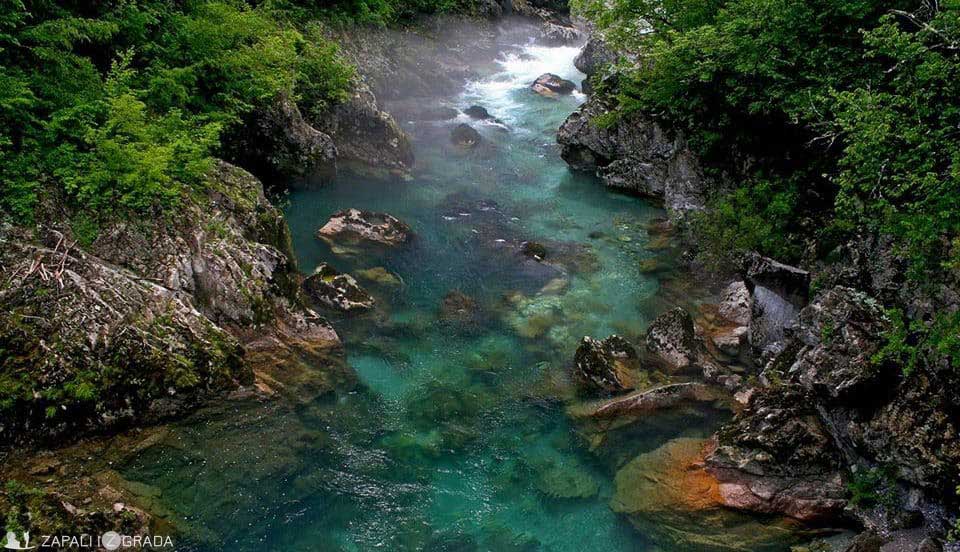 I went to the river and splashed my face with the ice-cold water of the river Mrtvica. It was my way of worship to this crystal watered queen, to tell her that I am giving myself in to her today, body and soul.

“My Queen” springs deep in the mountain, at 1200 meters, and then for fifteen kilometers collects all the torrents of the mountain, turning into one of the most exquisite tributaries of the river Morača. For thousands of years she has fought with the mighty walls, to carve a magnificent road, creating an unusual natural world that was almost unknown to the public, only recounted among locals and rare adventurers. 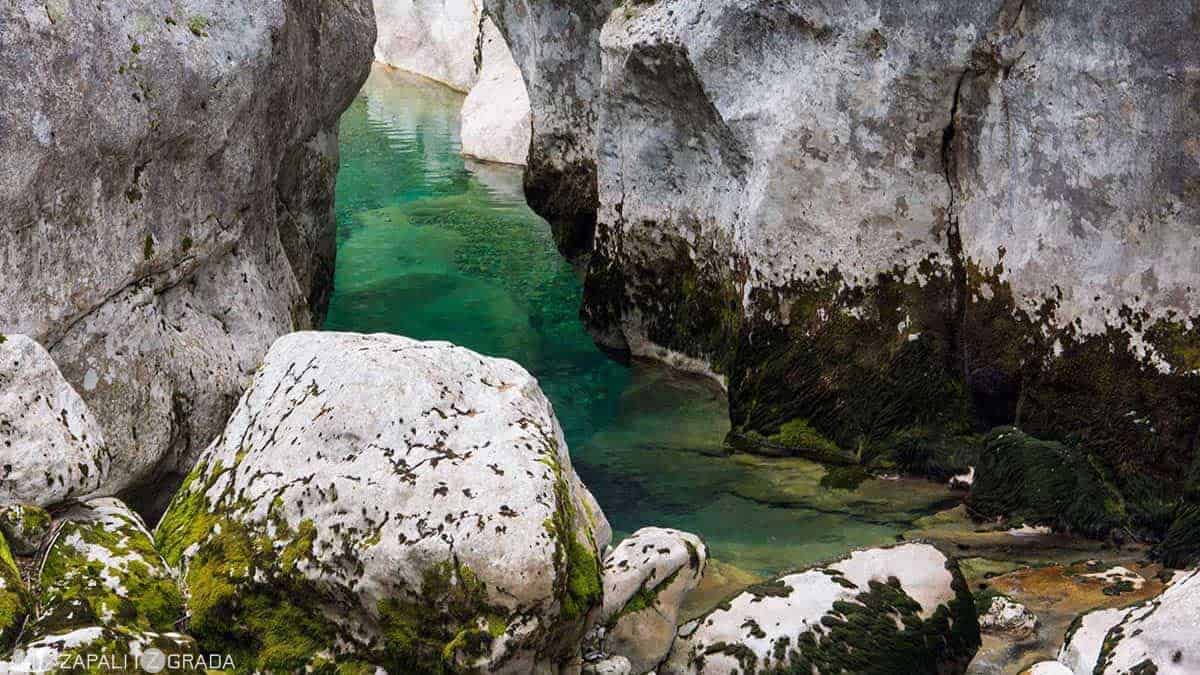 Her name is terrifying, almost like the ice coldness of her water, but she is not scary. Especially not to those who walked into her vivid canyon at least once.

„The origin of this unusual name, according to an ancient legend, is associated with a natural disaster, when the Captain’s lake overflooded, as a result of huge snowfall. These waters merged with an existing river, creating a torrent of horrible power, which carried everything in its path, including dead bodies, all the way to the village of Mrtvo Duboko (Dead Deep), thus naming both the river and the village. Another, more realistic story, says that the river is so cold that not even the dead would bathe in it. And the third, most probable version is that the name was given to illustrate the nature of this subterranean river, which dies when going underground, only to become alive again – upon emerging at the surface. .“

At the village of Velja Duboko, it looks like a common shallow mountain stream, clear and cold. The rolling of white pebbles and sprinkling of sporadic stones on the shore gives only an indication of what awaits us. Following her seductive game, we walk the broad plateau by the river and, as blindfolded by an invisible magnet or a silent flute, approach the ravine between the mountains Maganik and Stožac. 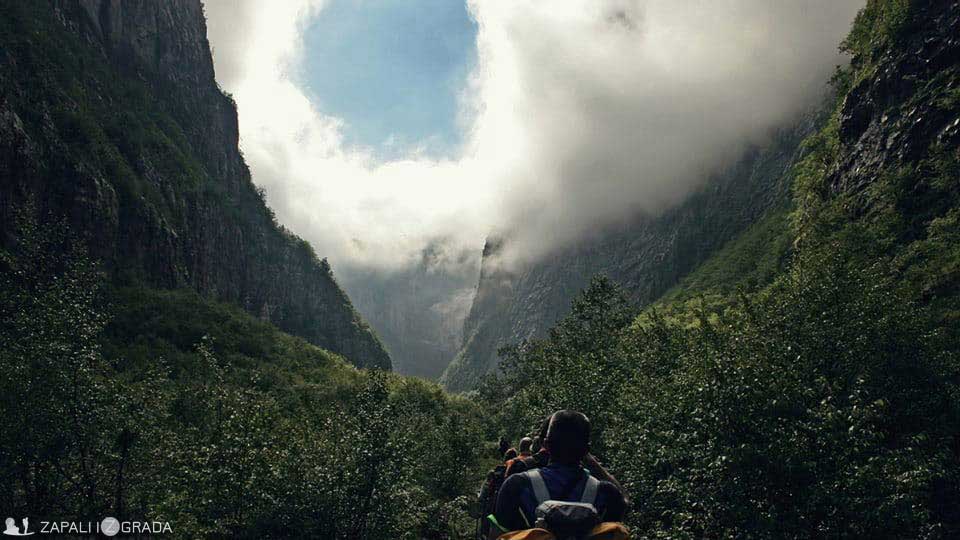 It’s like she’s leading us to show us something, as if she’s deliberately taking us deeper into the canyon. Moving along a narrow forest path, we quickly descend to the river and enter the canyon. The adventure starts.

At the beginning of the canyon we are surrounded by lush green plants. Due to an increased concentration of moisture, there is a rainforest that gives a completely different perspective than the one we were accustomed to during our long hikes among Morača cliffs. 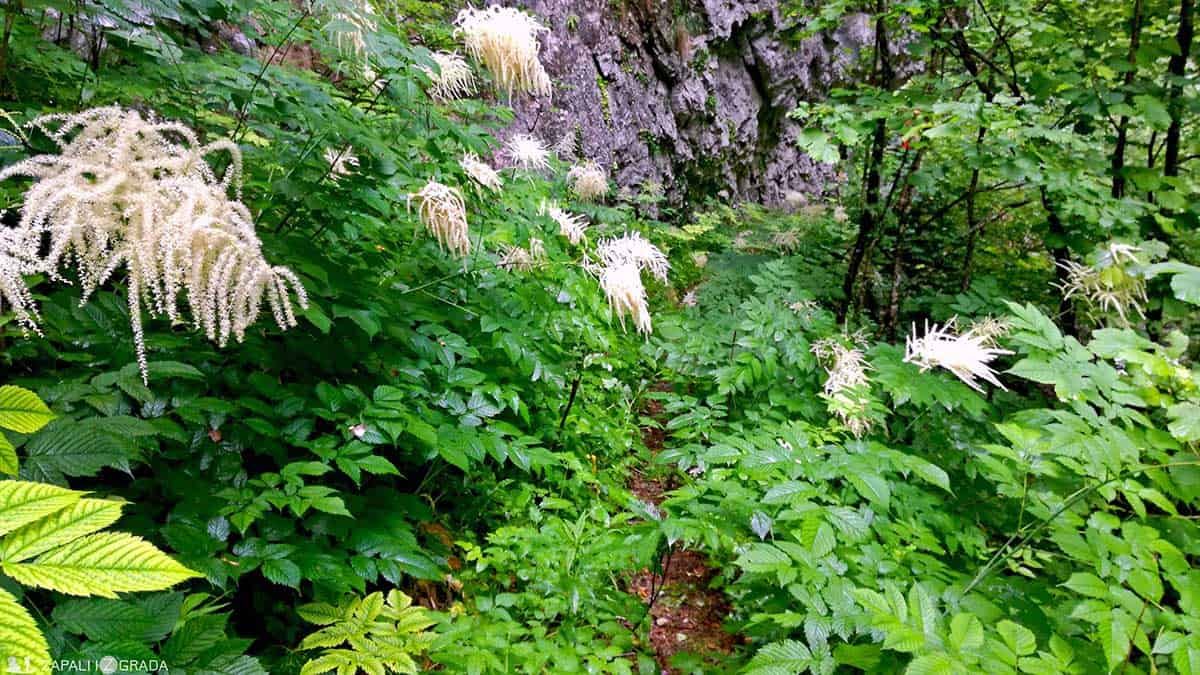 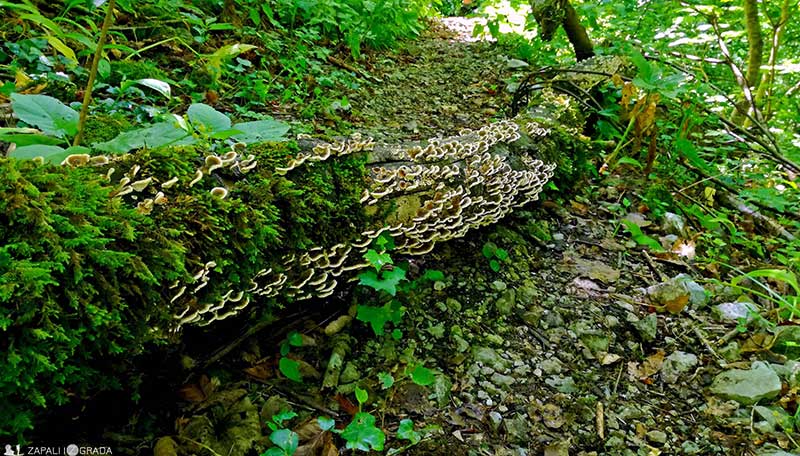 While I was passing through the canyon, I did not know what to focus on first, everything attracted me. I saw exotic plants and enjoyed the varieties of their colors and shapes, knowing that they were the ones providing this overwhelming smell of freshness. Looking up, I saw a beautiful metaphor – the sky was narrowed to a curved blue line, running between the sharp cut walls over a thousand meters high, as a reflection of the river beneath my legs. 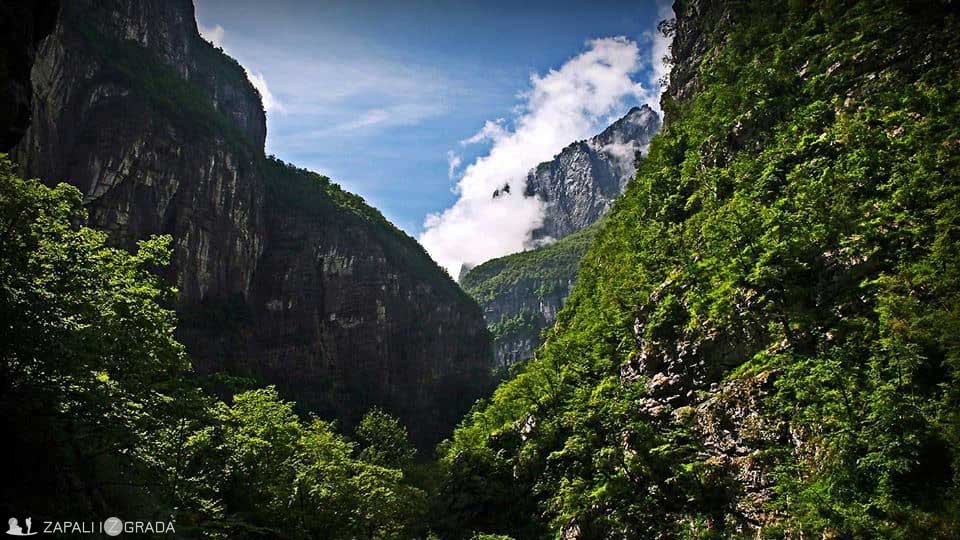 I heard that the Mrtvica canyon is deeper than the Tara canyon, but that it is a public secret. I was wondering why nobody wants to determine if this incredible natural creation carries the flattering title of the deepest canyon of Europe. The flow of thought was interrupted by another water stream and the whoop of the unrealistically beautiful river, as if shouting: “Stop thinking, enjoy, let it go!” 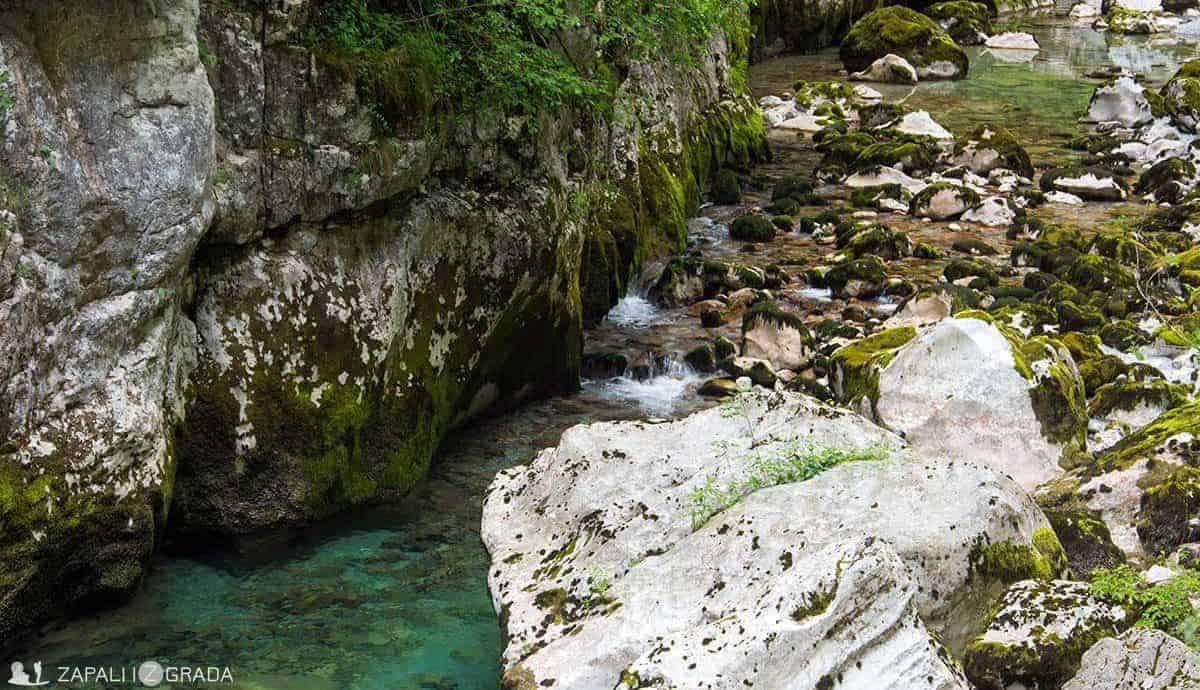 And what else could I do, but to indulge myself with this mountain coquette, beautiful and graceful? Throughout her flow, she is carrying her clean, drinkable water in a playful dance. At one point she disappears under the ground, at another she stops your breath when she hits the surface again, jumping on rocks, running underneath walls, hooks, jaws, hatches, leaving tiny water streams to roll down rocks and moss. 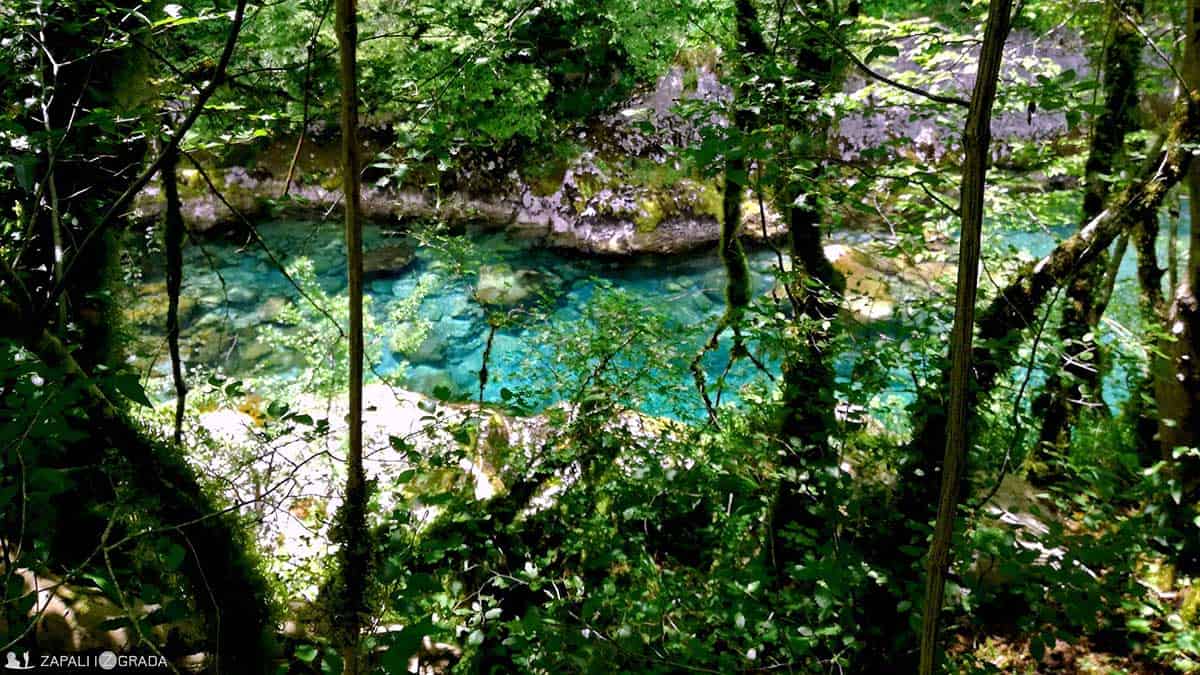 How to describe, how to write about the colors? It’s like mixing both the sky and the forest in its waters, then she chooses what she will reflect, depending on her mood. Emerald and blue-green, blue, turquoise, petroleum, and it is only when she gets angry and entangled in rapids, that she gets pure white. 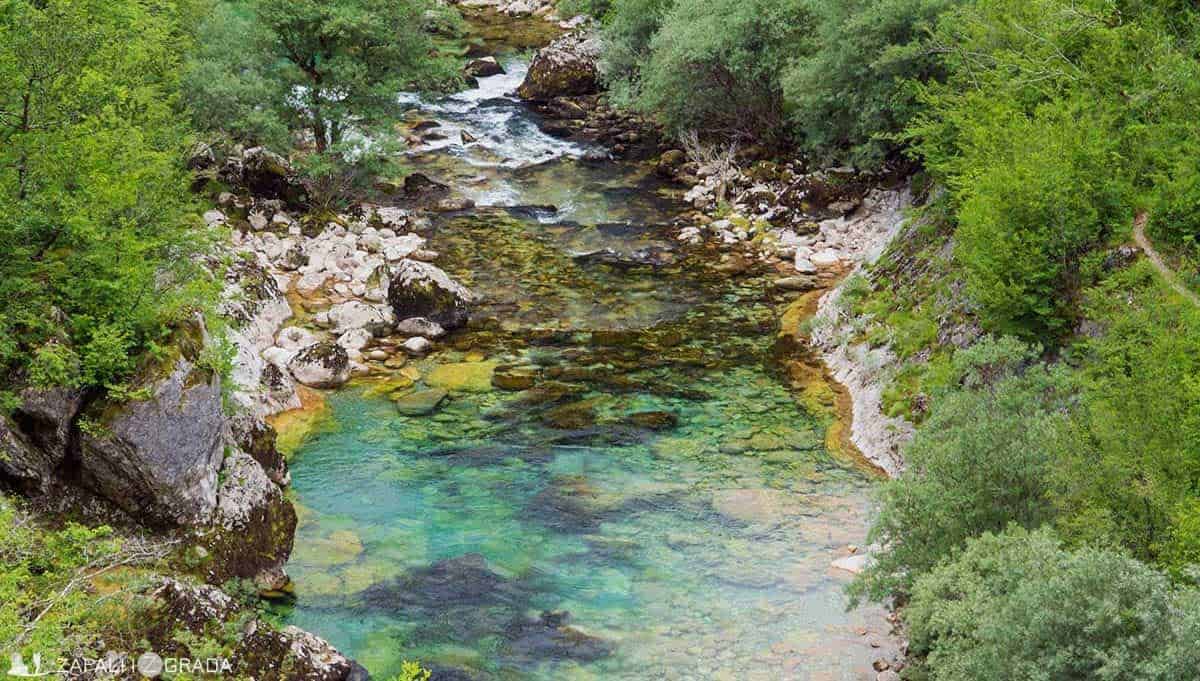 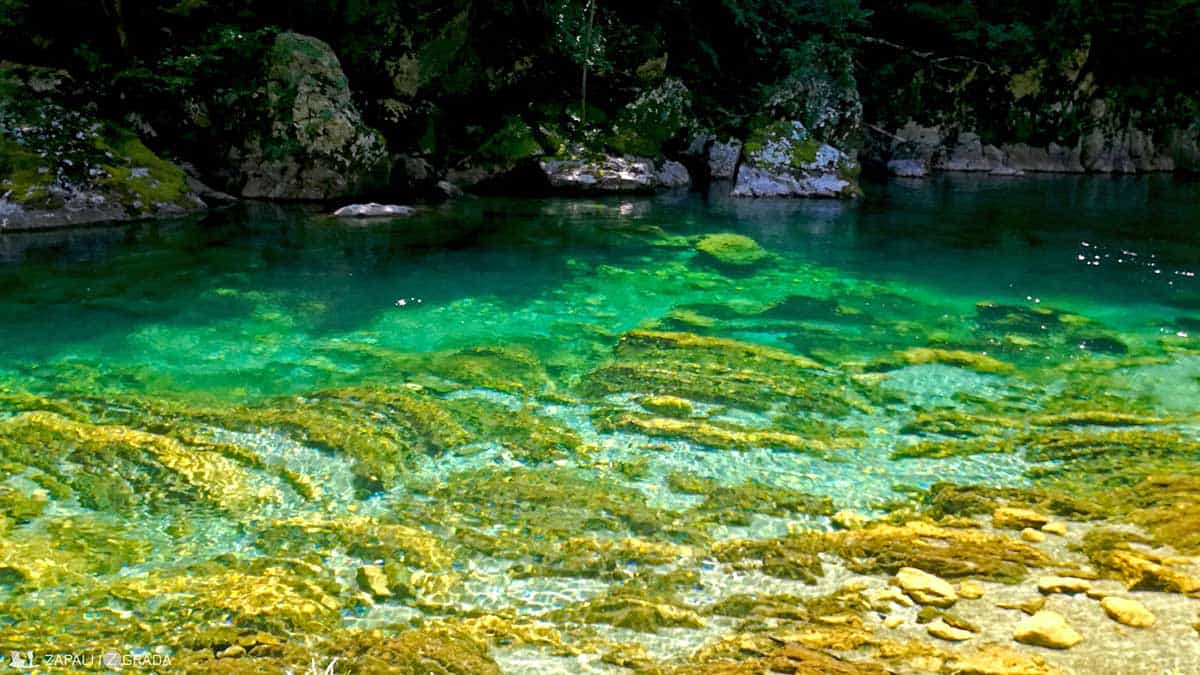 We arrive to the Aphrodite baths, to the pools she’s been carving for centuries, in which she gets lazier, spilling its waters in this beautiful turquoise shade, inviting bathers to join her. However, apart from the desire, which we all undoubtedly had, it was necessary to have the courage to bathe in this water, which would be frozen if only four degrees cooler. I did not think about it, because I knew that I would never forgive myself for such a missed opportunity… 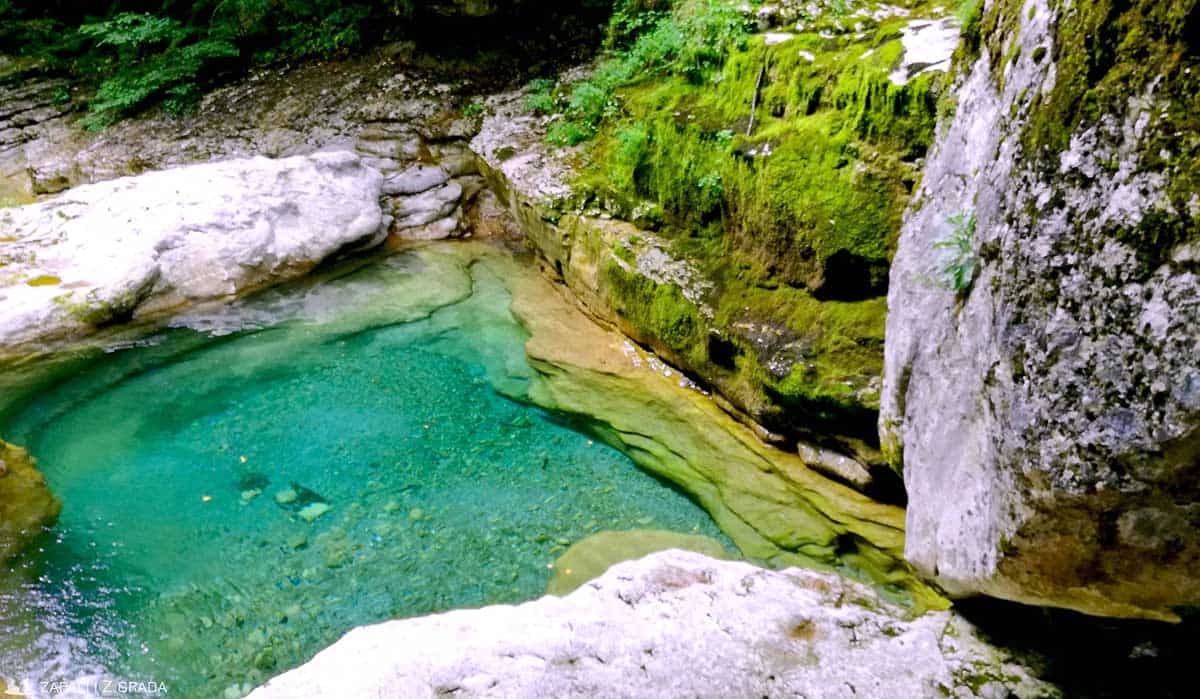 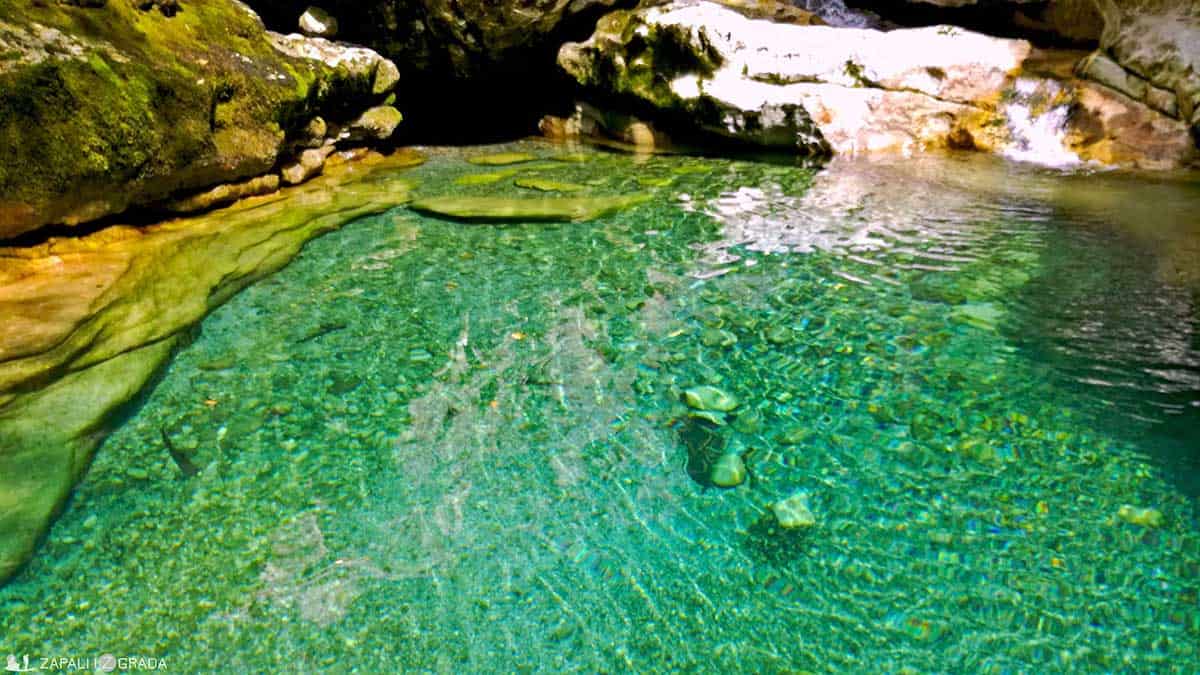 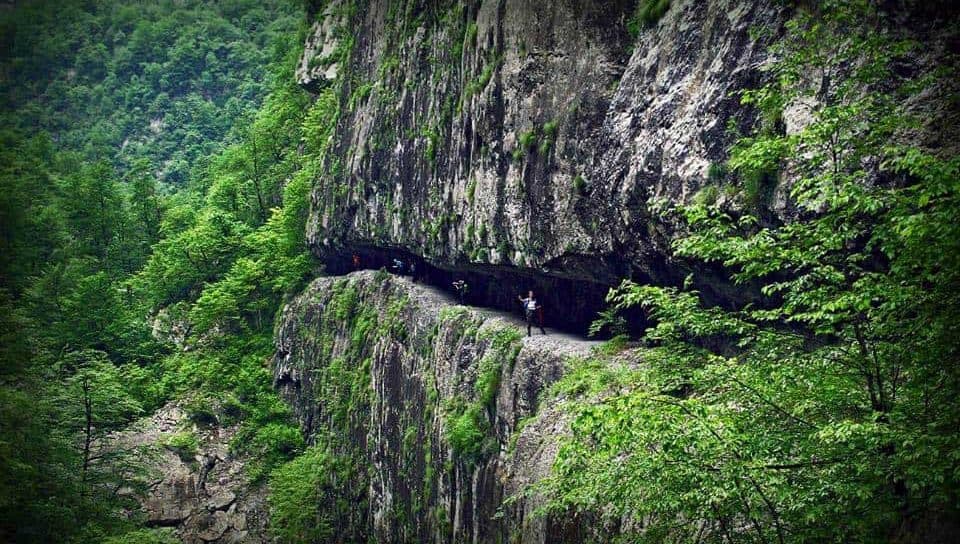 The path, which can be used throughout the year, is reinforced – tiled or hammered – in some places. But the greatest achievement is the part which was cut high above the river stream, by explosives through the granite walls of Stožac. This part, which is like a tunnel, is called the Beams of the Dead and is a real attraction. 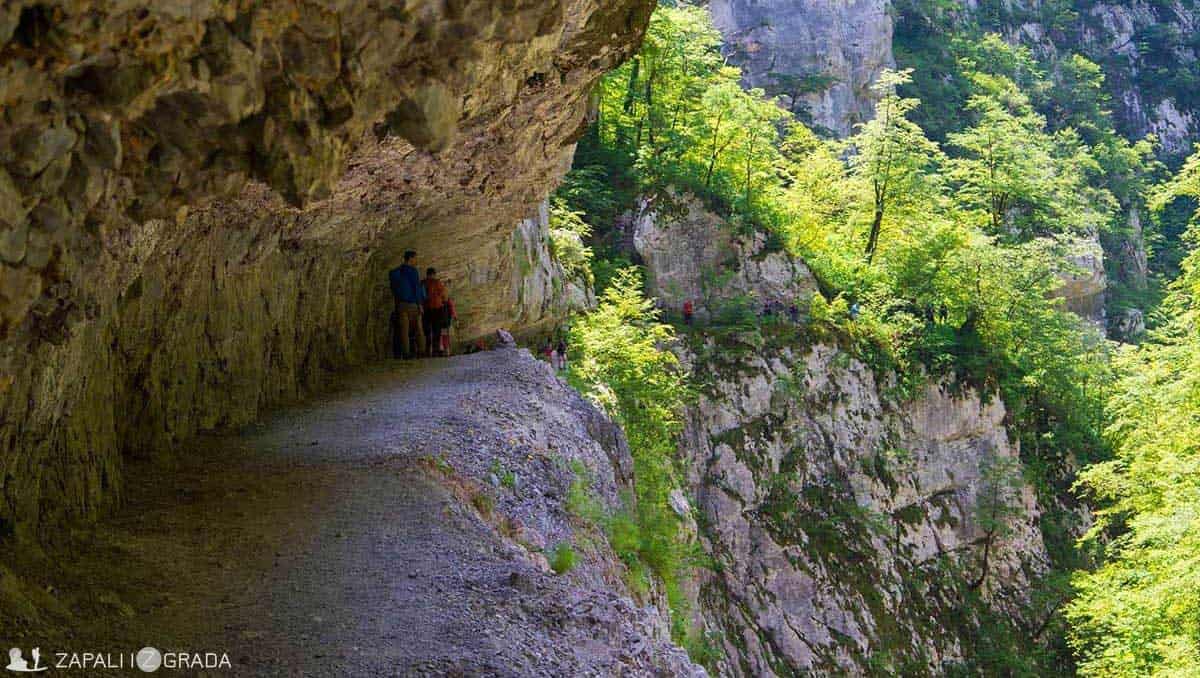 We arrive very quickly to the White Nerina, the strong sparkling waterfalls that fall thunderously into the Mrtvica. The water gushes out unstoppably, out of the smallest pores, madly flows in cascades, their theatrical performance shakes and echoes across the entire canyon. 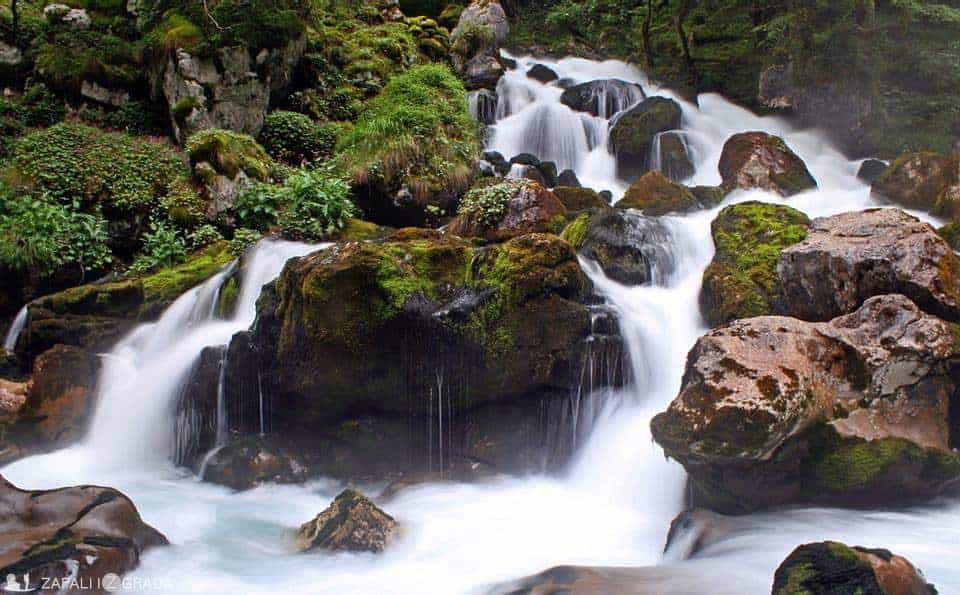 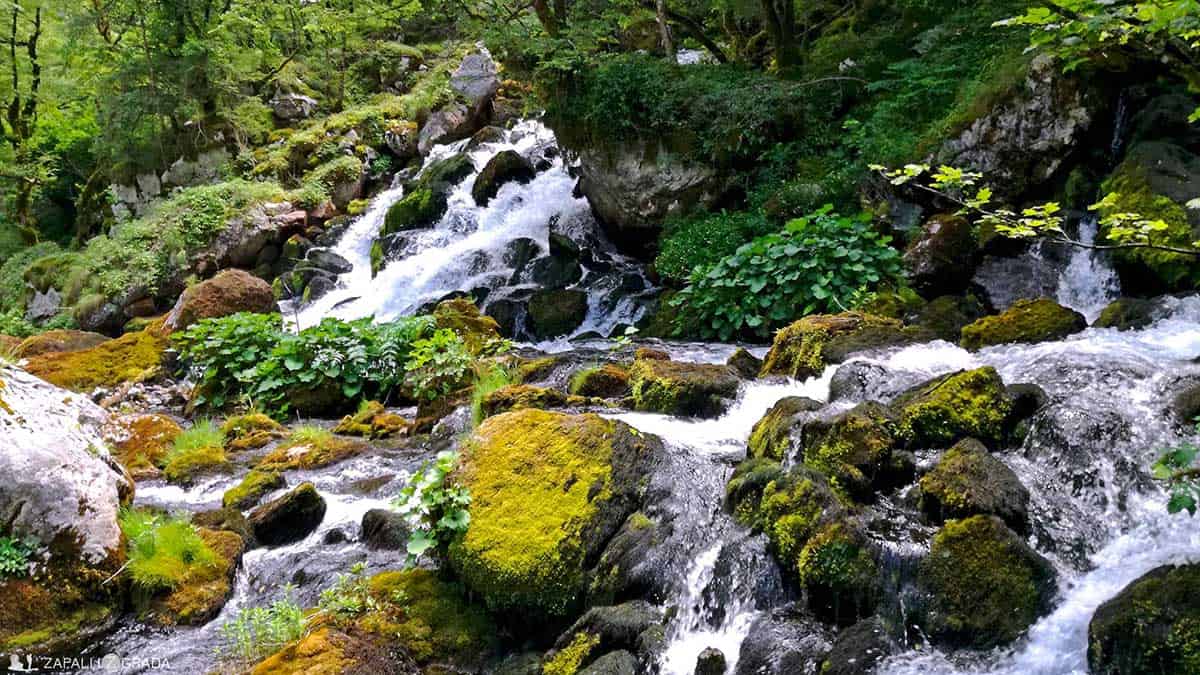 While water particles sprayed against our camera lens, we all tried to freeze this beautiful and wild force into our photos. 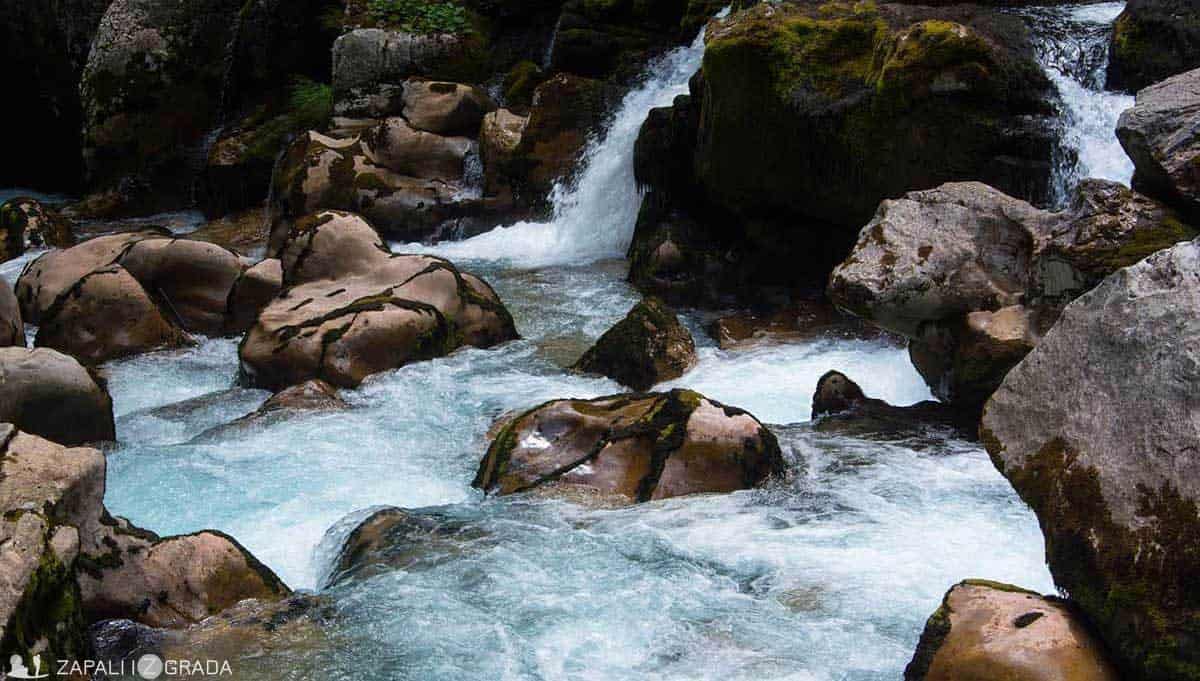 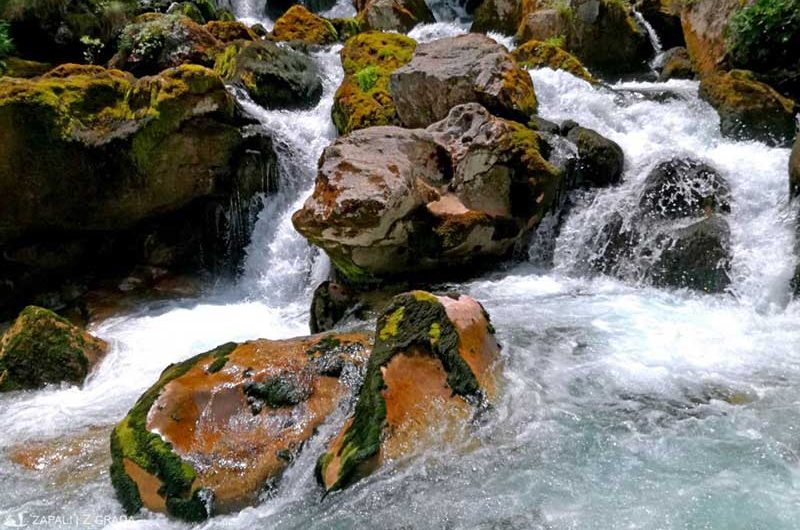 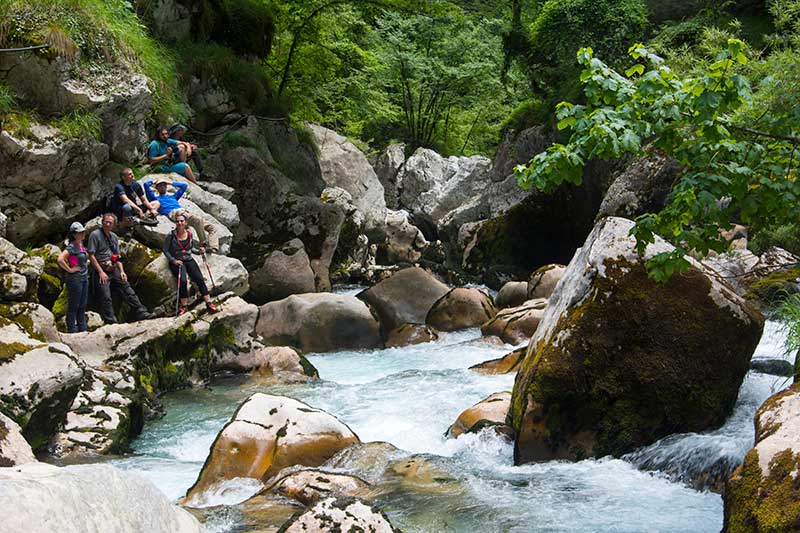 But, this was no end to attractions. Only after the symphony of this incredible waterfall began to diminish in our ears, we entered the area called Magic Forest. This is not a marketing or tourism trick or a (semi) fictional term to get more visitors. 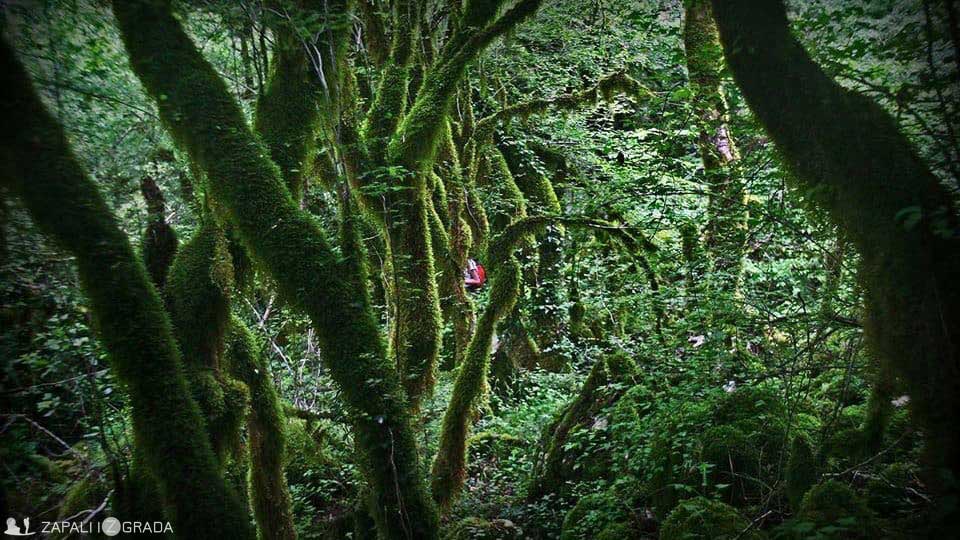 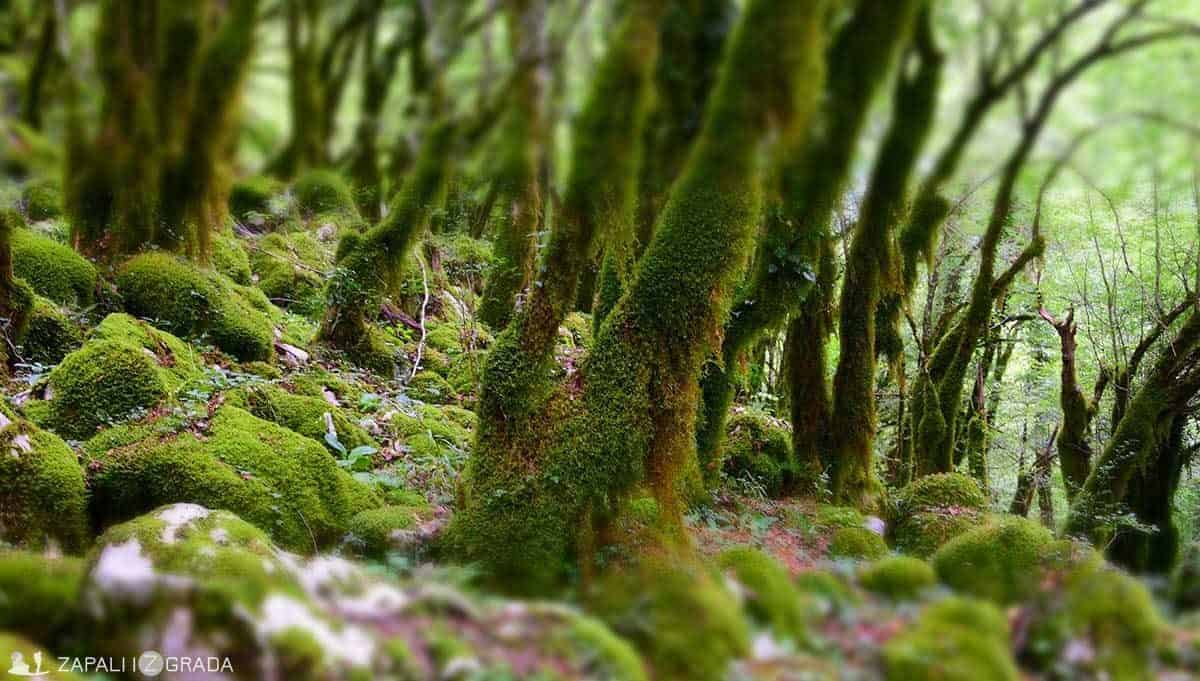 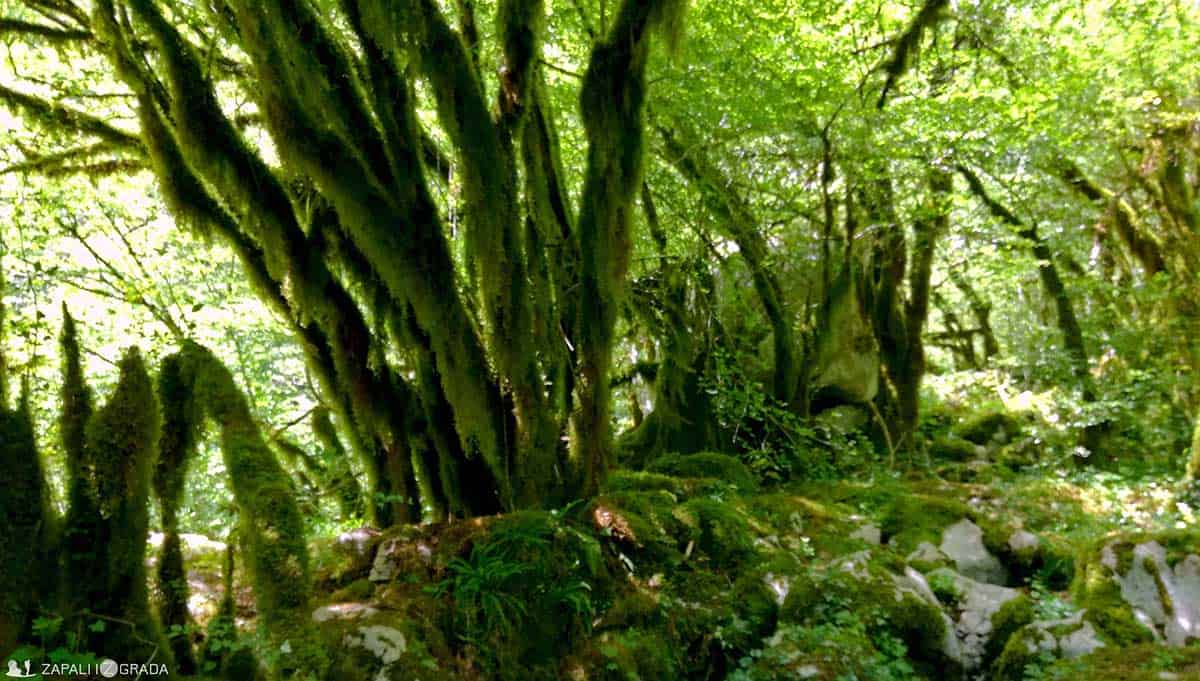 Anyone who loved fairy tales as a child and fantasized reading them, gets a real chance here to revive and visit them. Crooked trees covered in moss and other unusual plants have an aura of mystery and epic fantasy, so it is not surprising that the Wish Gate is right here. 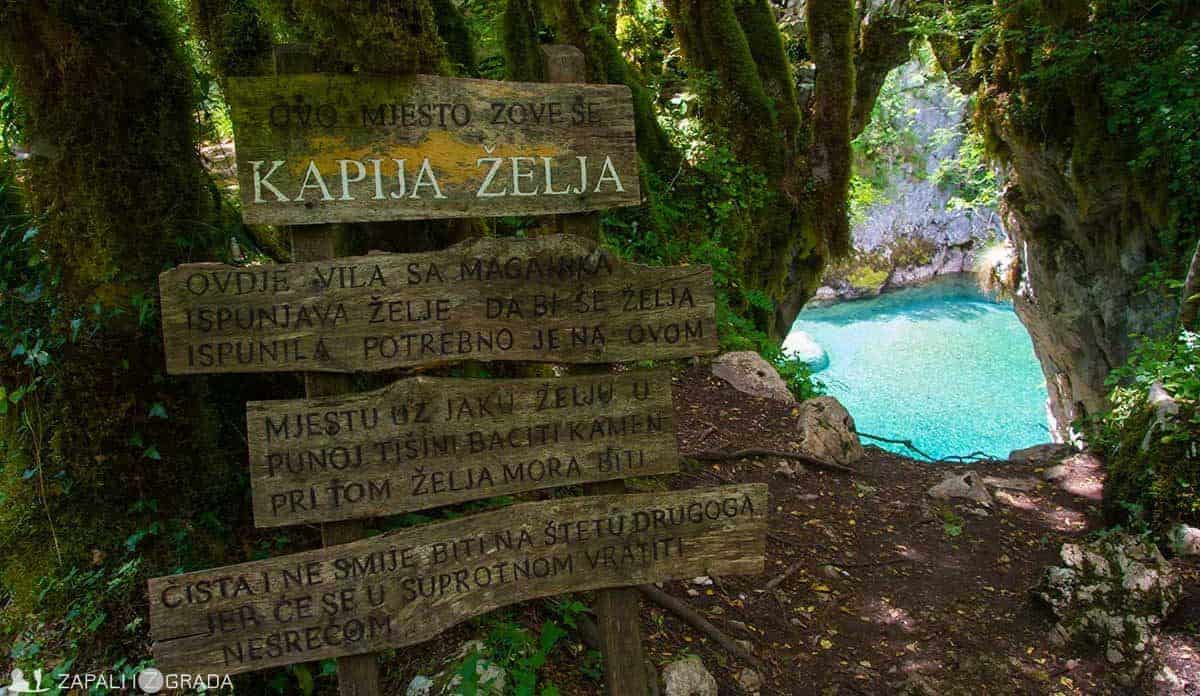 It is a natural phenomenon made by two rocks in eternal embrace, forming a triangle with Mrtvica flowing in the background. The moss and plants only add to this breath-taking image. 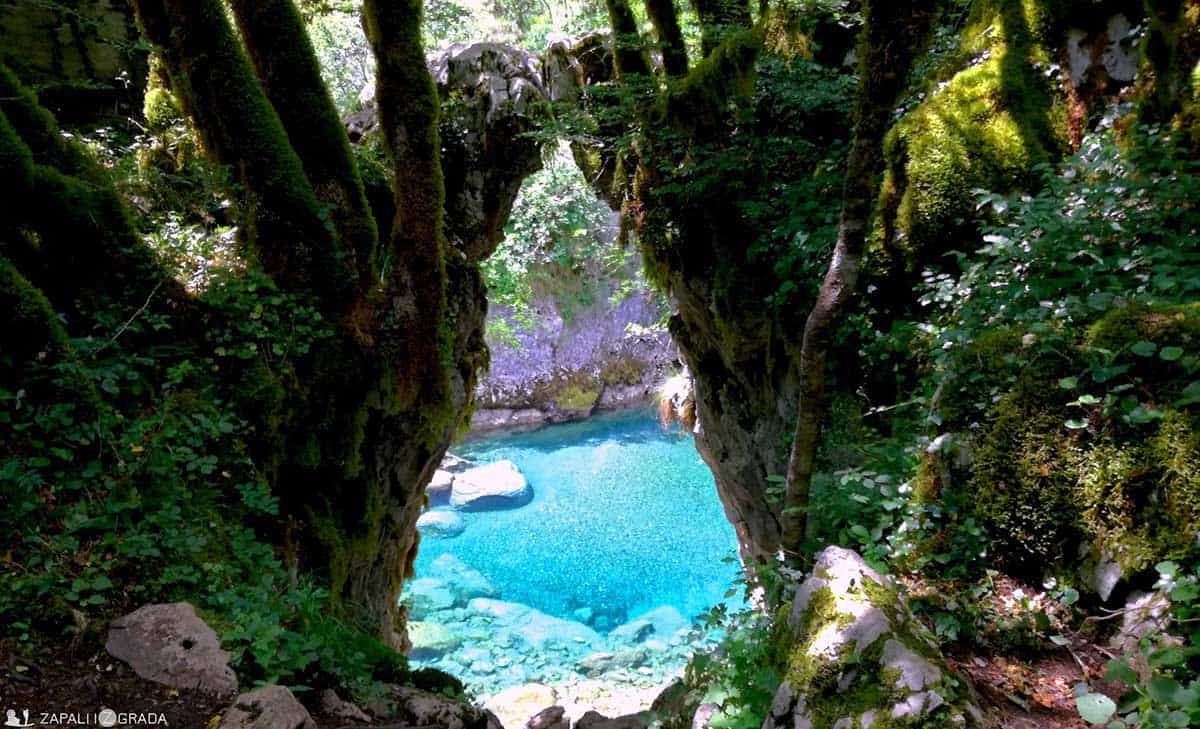 „Also, according to the legend, fairies from Maganik will make a wish come true to those who throw a stone into the Wish Gate in complete silence. The wish must be sincere and not to the detriment of someone else, otherwise it will come back in a bad way.“

Because of so many sincere wishes, all the stones from this area have disappeared, so if you want to test the fairies, pick up a stone somewhere along the way. Mrtvica, as if stopping for a second just before the Wish Gate, will listen to your desire and check your pure heart. 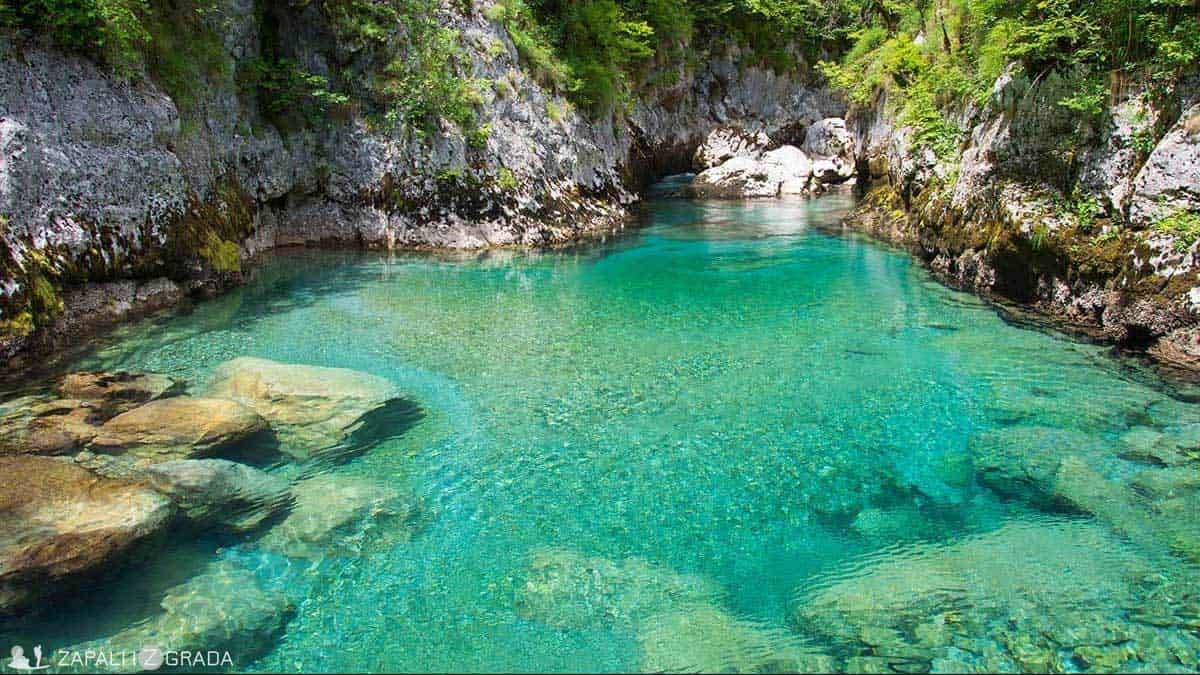 Rolling the rocks and carrying a stunning hook, the mountain river now reaches Danilo Bridge, and so do we. In 1858, the renowned bridge was built by the famous Prince Petrović by the same name, in honor of his mother who was born in these parts. This beautiful creation is the “ending credits” with which the Mrtvica says goodbye to the canyon, showing itself in its full emerald luxury and joining Morača, not far away from there. 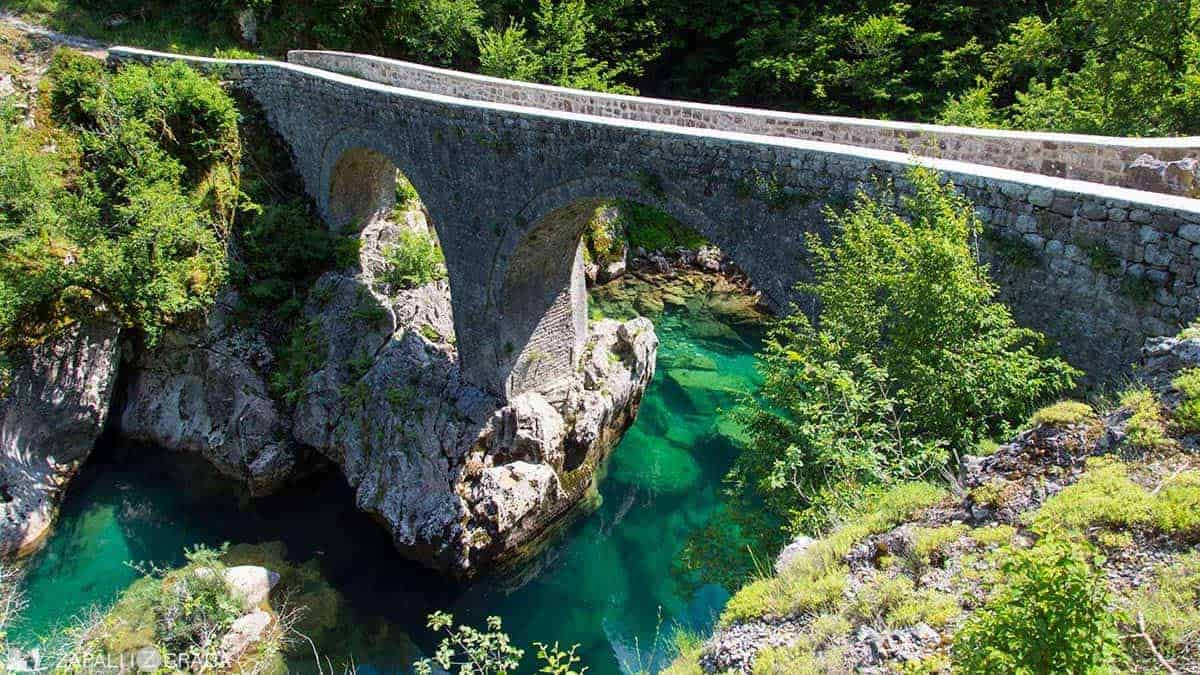 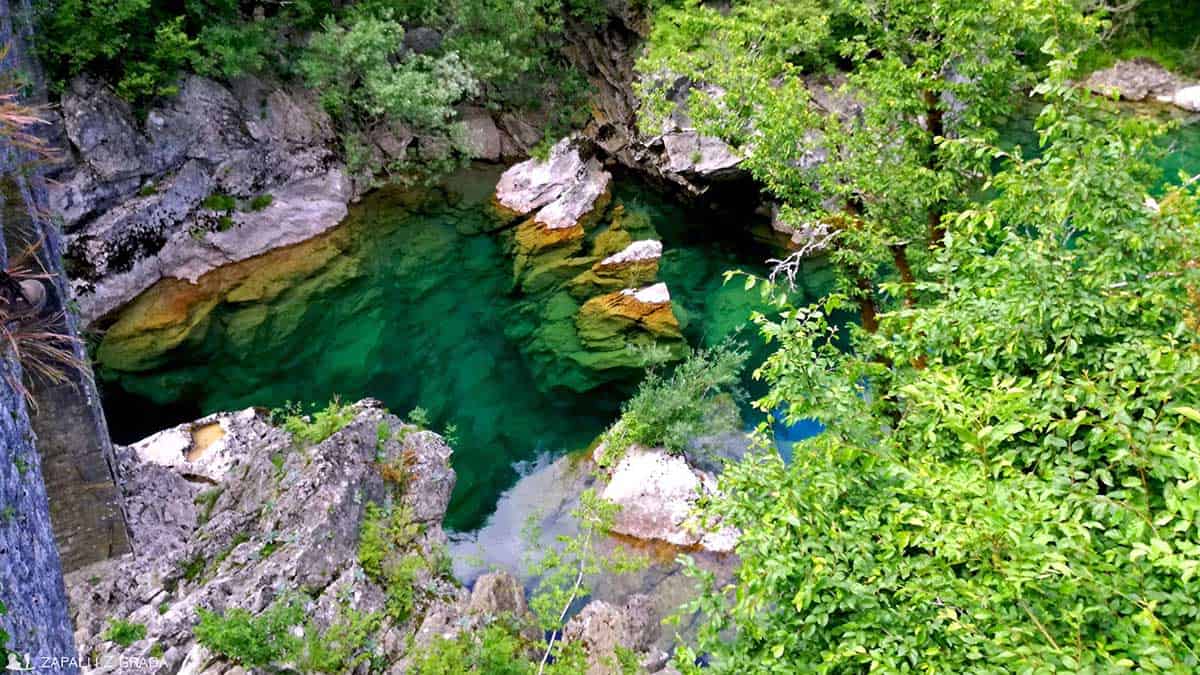 I was utterly impressed while I walked to Međurečje, where a van was waiting for us. The only thing I’ve been thinking about after these 13 kilometers is how to show this to those close to me, how to take them here, to find out what I saw and experienced. There are so little words to describe it all. Until next time, stay well Mrtvica!