After about two hundred kilometers and three hours’ drive from Belgrade we come upon the Đerdap gorge, part of a Serbian national park with the same name. This in many ways unique site separates the Balkans from Central Europe and a few other places where you can witness a competition of grandiose natural beauty and traces of the past.

The Đerdap National Park stretches across 100 kilometers, from Golubac to Karataš near Kladovo. It includes a narrow area covered in mountains and forests, with a radius of two to eight kilometers along the Danube River, which rises from 50 to 800 meters above sea level. This area was declared a national park in 1974.

Our biggest national park “metaphorically” embraces our greatest river – the Danube. The result of their great “love” and synergy are imposing natural works of art. The Đerdap gorge is the longest and biggest gorge in Europe. 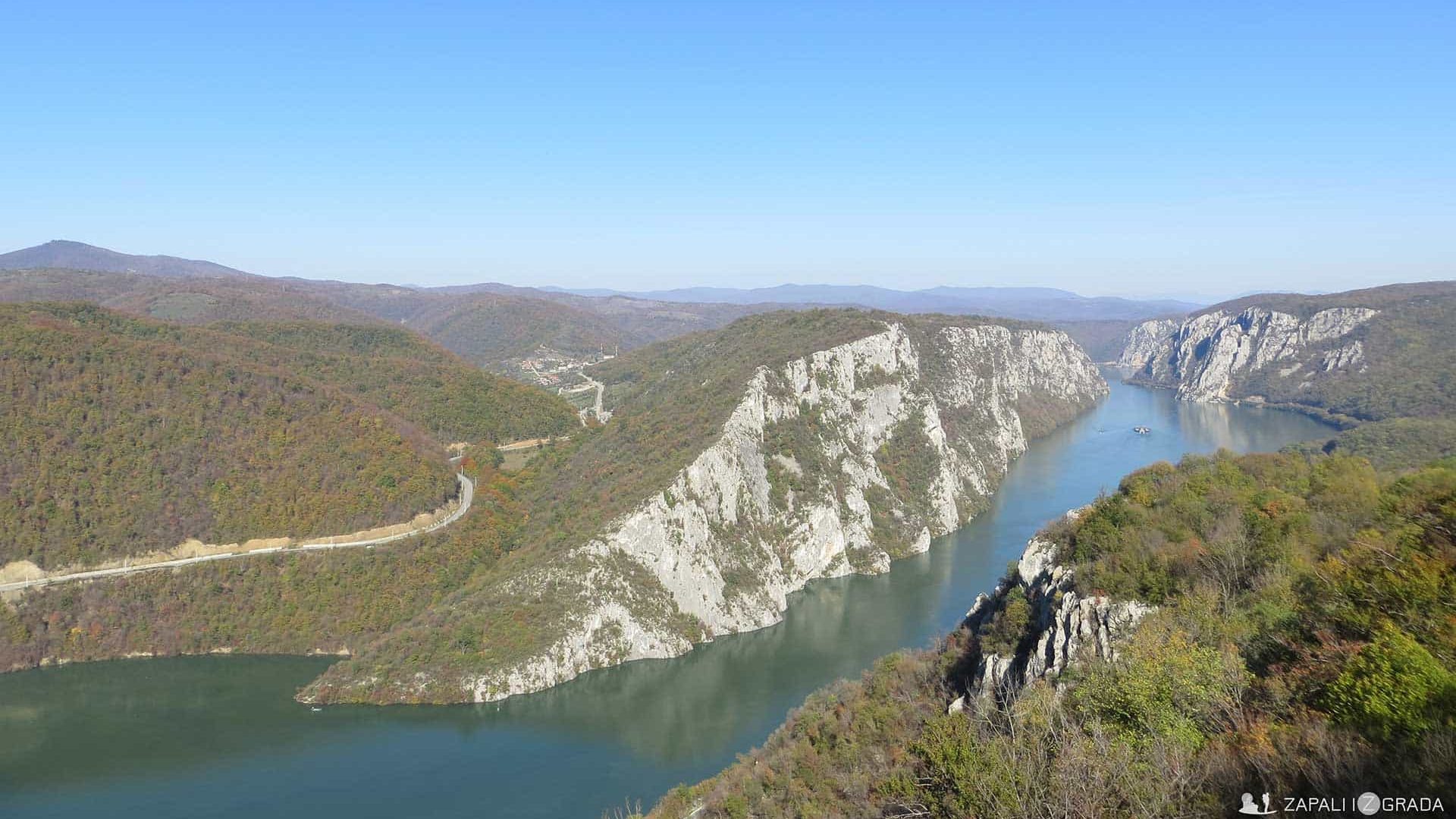 It consists of four smaller gorges, three valleys and two canyons. The Danube shows all of its power and grandeur only along a small part, compared to the full length of its flow. At this part, it is the widest, the narrowest and the deepest. In Golubac, it got quite comfortable, spreading across 6000 m, while at its most beautiful point, called the Small and Big Kazan, the Danube narrows to 140 m and reaches 90 meters in depth. It even gets down to 30 meters below the level of the Black Sea, deservedly taking the title of the second deepest river in Europe.

The main feature of Đerdap is that it is covered in vast forest (around 65 percent) with colorful flora and fauna. Over 1000 species of plants live here, some of which extremely rare, while animal lovers will be pleasantly surprised to learn that the park hosts the lynx, bear, jackal, wild boar, eagle owl, peregrine falcons, storks, deer, skunk…

With so much water, plants and animals, it is logical that men in the past recognized the life potential of this region. Cultural and historical heritage from different epochs is such that it is difficult to compile in a book, let alone a blog post. Only along this stretch, we can proud ourselves with much history, especially when compared to some younger nations which don’t have such rich inheritance. On the way to Đerdap, do not miss to visit the Viminacium, Ram and Golubac. Also, other areas of the national park include Lepenski Vir and two special monuments that remind us of its turbulent history, symbols of many years of war between the Romans and the Dacians. 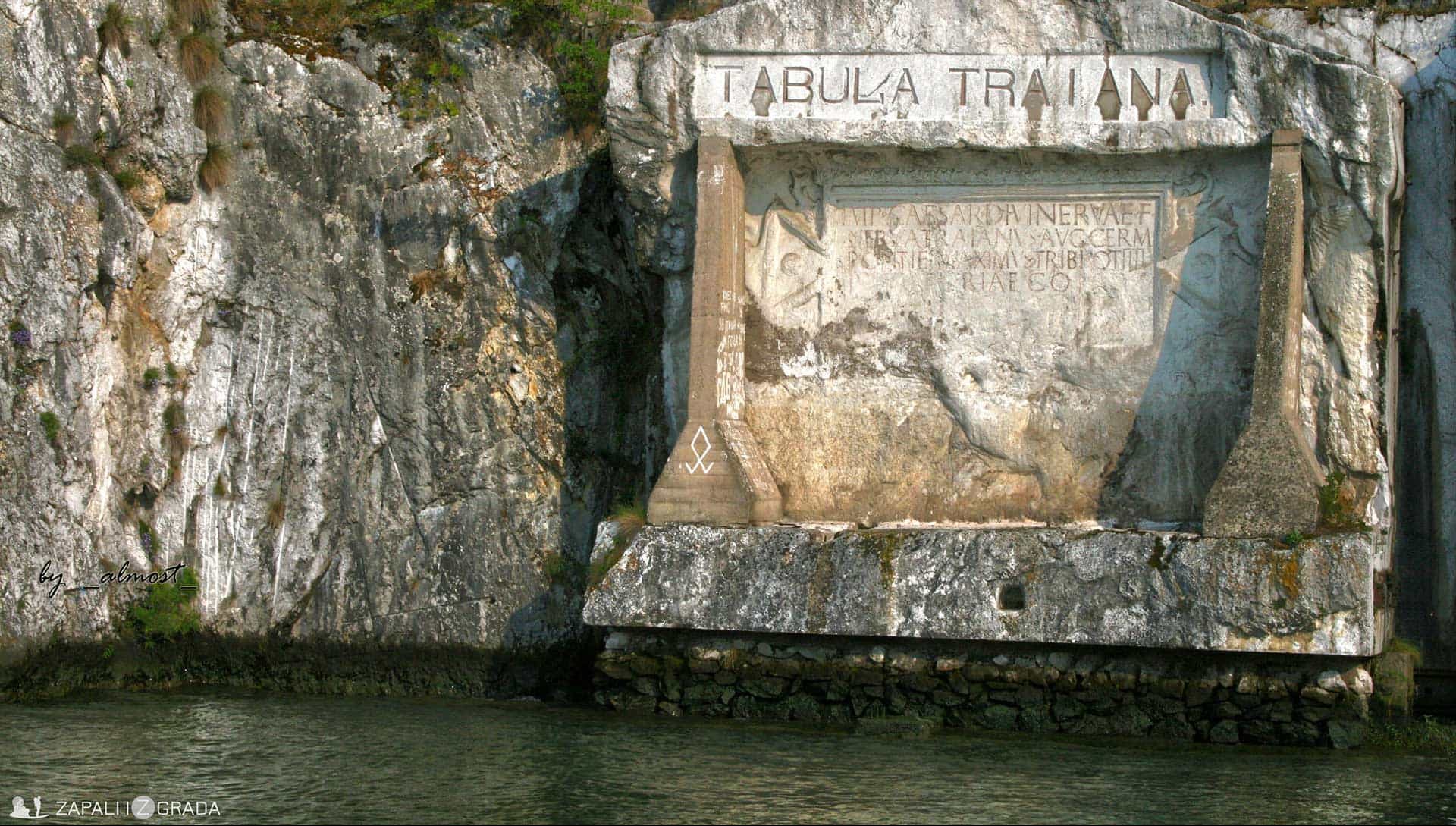 Trajan’s Plaque or Tabula Traiana – 3,2m long and 1,8m high, carved in the honor of Emperor Trajan and the successful penetration of the Đerdap gorge, as a necessary and final preparation for the invasion on Dacia. During the construction of the hydroelectric power plant it was cut and lifted twenty meters above, so it is visible only to those who go on cruises or kayak tours. 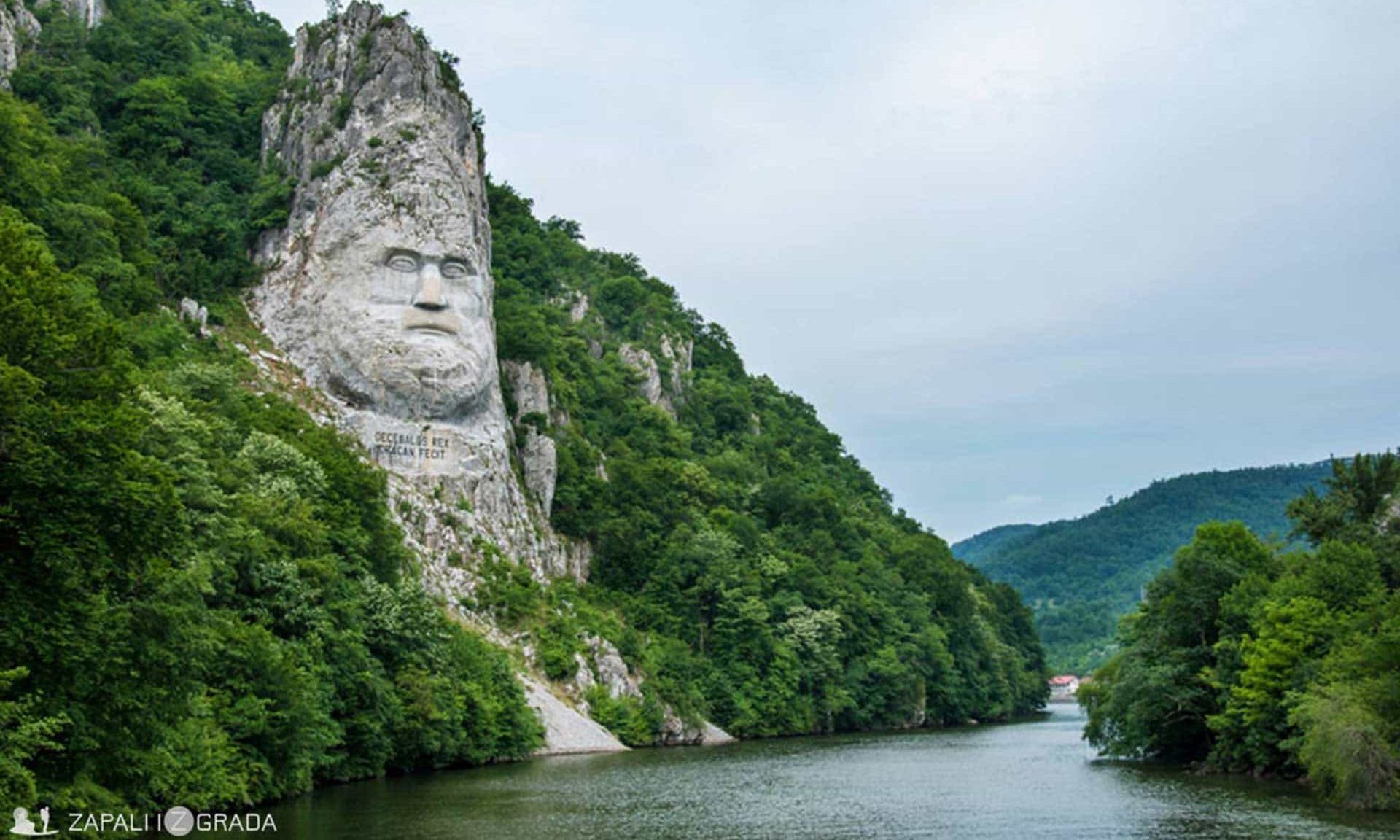 The stone face of King Decebal (Decebalus) was carved exactly opposite to the Trajan plaque, so the two rulers can defy each other until doomsday. The idea and finances behind this monument are the legacy of a Romanian tycoon, and the “guardian of the cauldron” was officially “given eyesight” in 2004. Twelve climbers/carvers had to work for ten years with the help of dynamite and jackhammers. A million and a half euros was invested in completing the largest carved sculpture in Europe. It’s about 40 meters high, with a 7 m nose 4.3 m eye!

The question is which is more impressive here, the nature or the history. So, it is no wonder that tourists of various affinities and passions have been visiting the area, as if drawn by magnets. The only really devastating fact is that there are more foreign than domestic tourists. I hope that this blog will help correct the statistics. 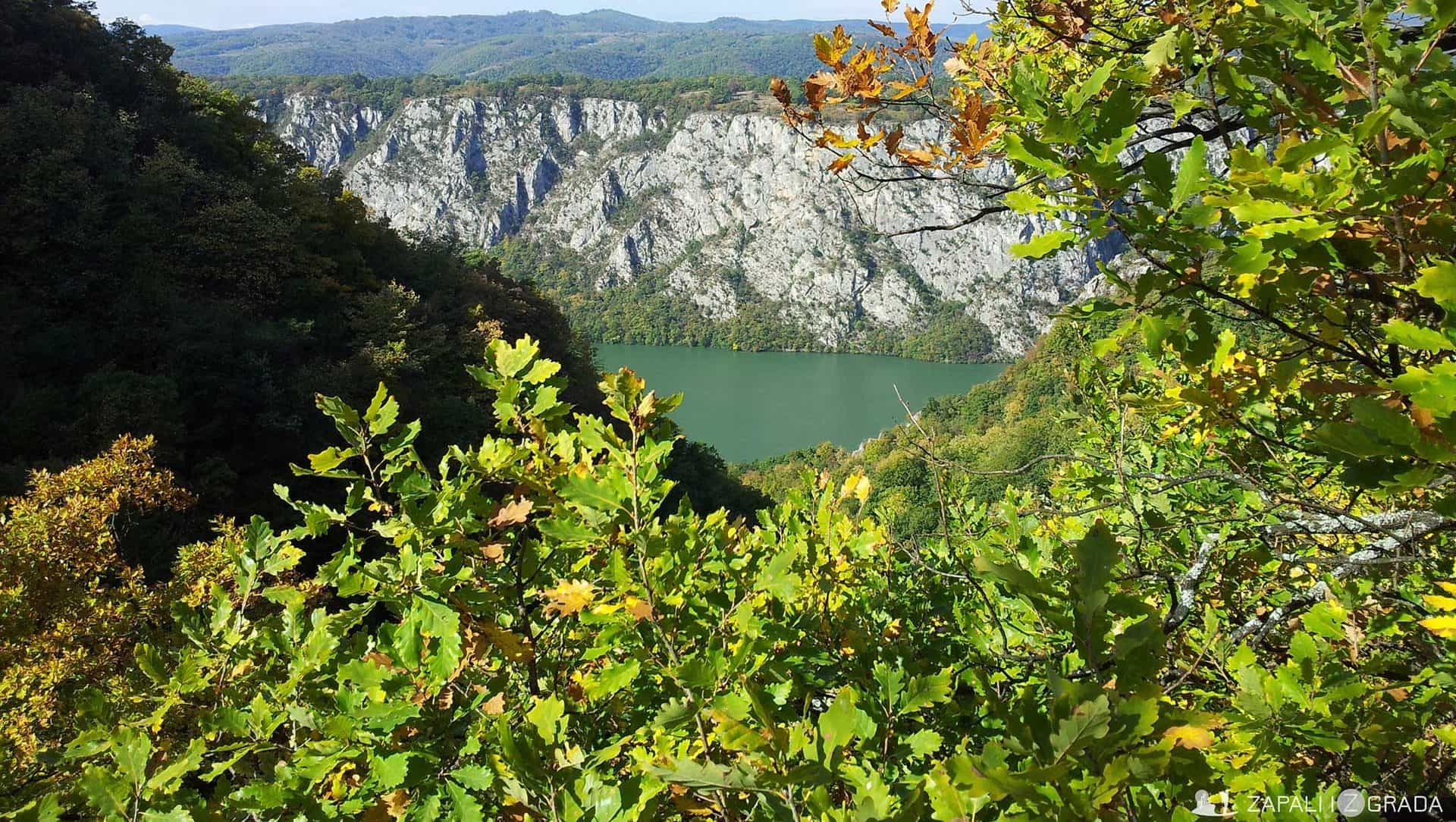 Our biggest national park consists of 10 nature reserves crisscrossed with cycling, canyon and mountain trails, all leading in the same direction: health and adventure. Also, they organize schools in nature, photo safaris, kayak tours and cruises. Just because all this is incredibly tempting, you should know that you need a number of days to truly get to know this natural and cultural-historical pearl of Serbia. Your tour will certainly depend on what you want to visit, after making a choice among all of the above.

To get to Miroč, use the fastest route: Belgrade-Požarevac-Golubac-Donji Milanovac and after you pass the village of Golubinje, look for a fountain on the right. For a tour of the Miroč Mountain, with attractive summits of Small and Big Štrbac, plan a whole day. The route is circular and it is possible to go on this adventure on your own. But I do not really recommend it, especially for those who have less experience with hiking and markings. In several places it is unclear which way to go, so you will experience a couple of unmarked crossroads. Also, it is required that you register your stay with the local rangers. For this reason, I advise checking the event calendars of hiking clubs – I went with Pobeda and Iskra, they are my warm recommendation. 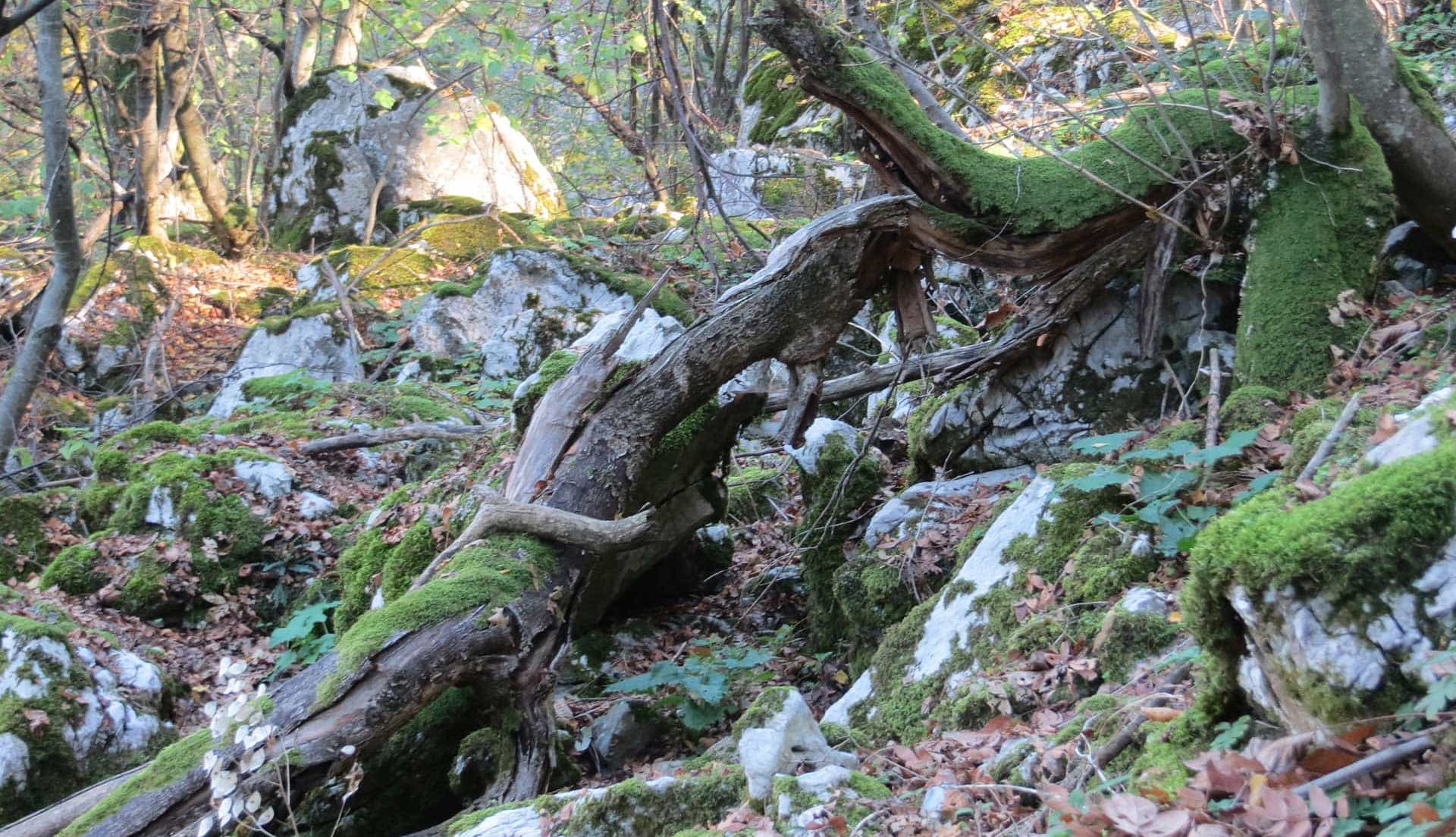 The main advantages of these tours are the lookouts, offering a spectacular view of the Danube in Kazan, its narrowest part. Most often the tours are organized in the fall, when the whole surrounding forest takes on the full range of rainbow colors.

Although the height is not big and the whole area is quite mild, this is a quite complex tour. First of all, in the sense of required strength and physical condition, as it is around 17 kilometers long with a difference in altitude of about 700 meters. I do not want to scare you or avert you from a view that you will long remember, but I am preparing you to a climb that will make you sweat.

The tour starts at the Danube main road near the fountain, exactly where my coordinates will take you. At the beginning, you will climb through the dense forest, along a marked path and after about an hour you will reach the lookout at 355 meters above sea level. 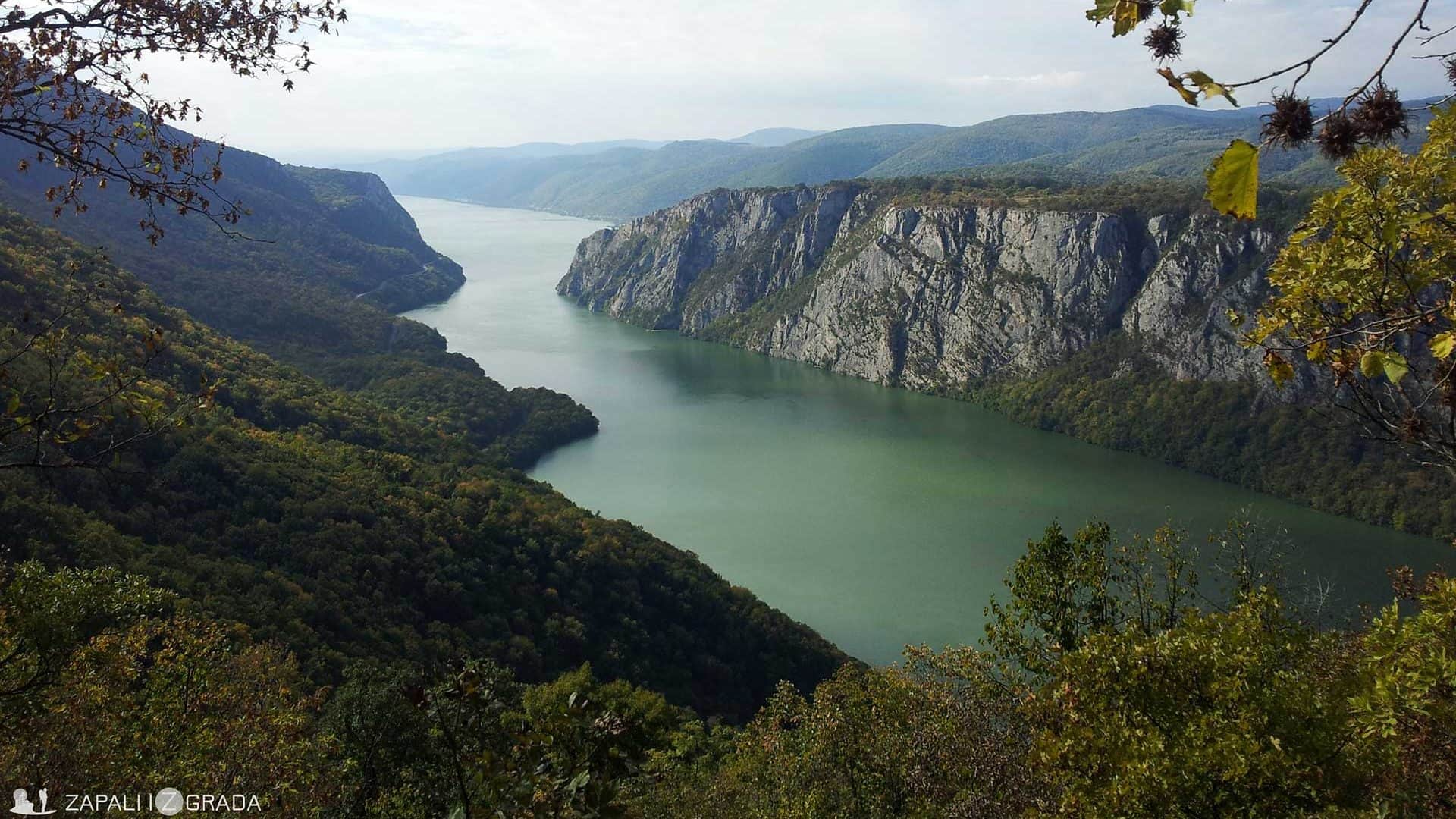 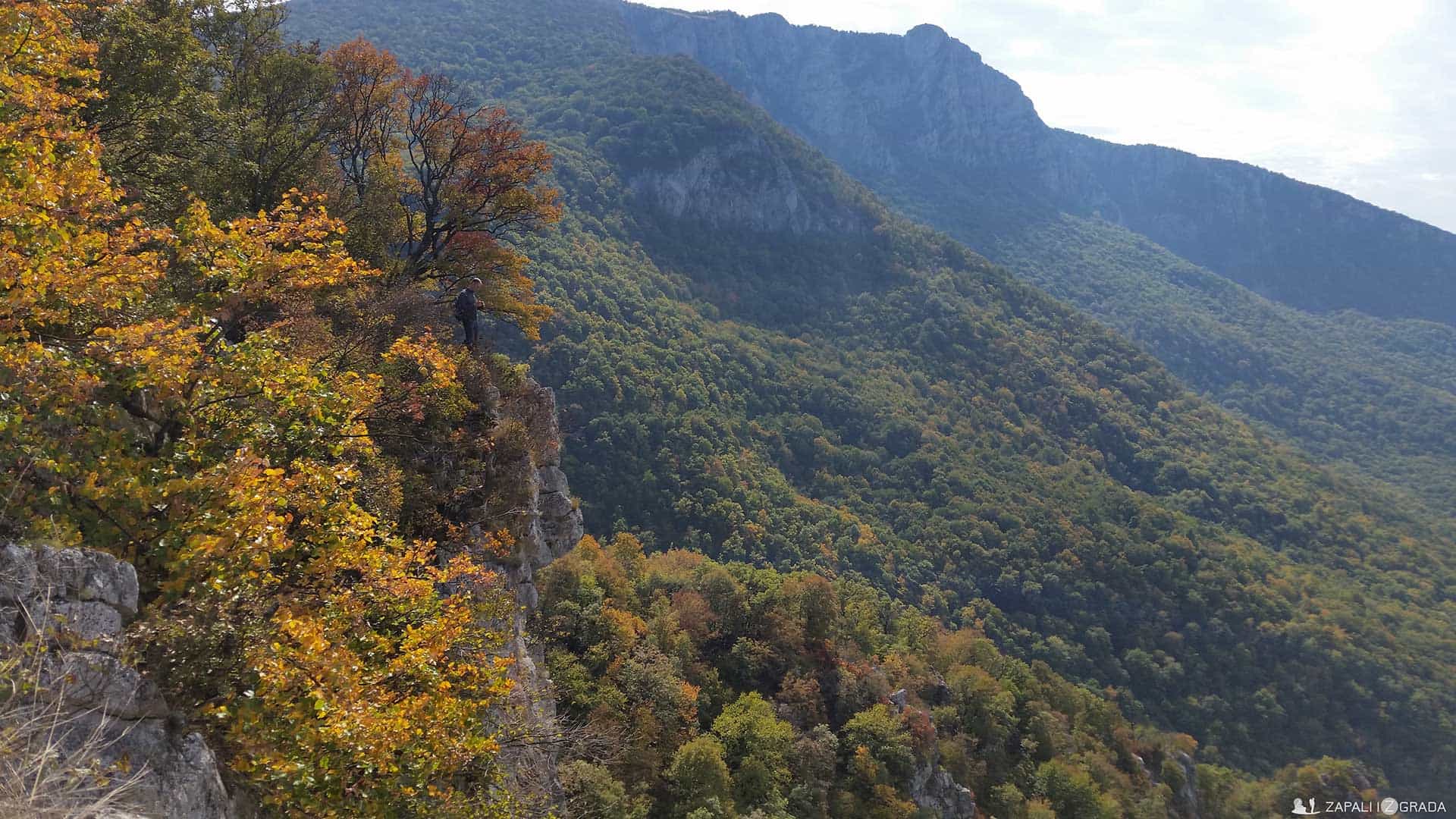 In addition to fantastic views of the mighty Danube, you will have the opportunity to see for the first time the target destination, the summit of Big Štrbac. It will appear several times during the tour and, depending on the angle, time of day and the position of the sun, it will drastically change its appearance.

The trail continues through the woods, and by slowly walking and filling your lungs you will soon arrive to a building which belongs to the National Park Đerdap. This is a good place for a short break and a snack. I think that this is the only water source on the trail, so plan to refill your water supplies. At this spot, a few years ago, I was lucky enough to enjoy the graceful play of young horses, absorbing the sun’s energy on a nearby meadow. 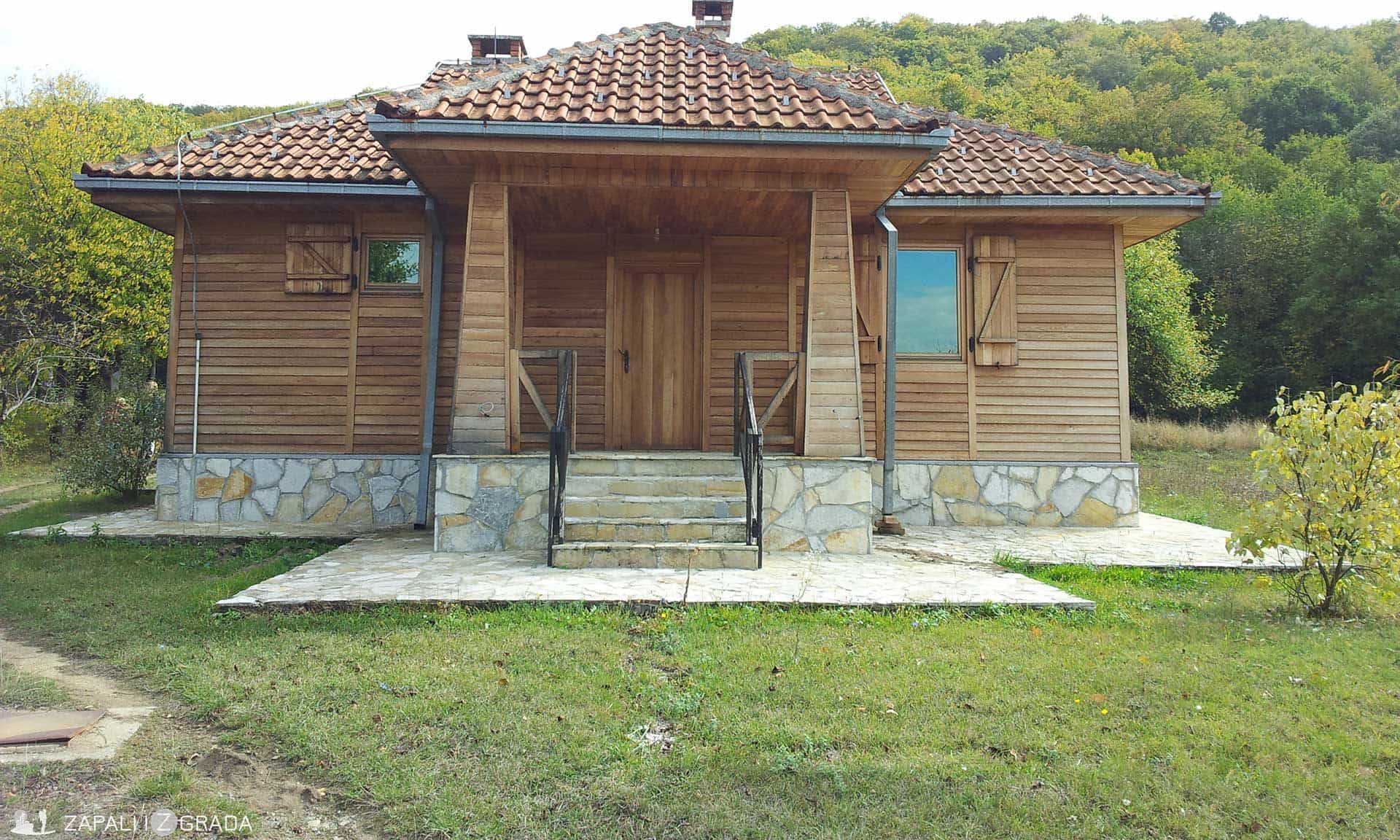 Now, here is the crossroad. One path leads to Small Štrbac, the second to Big Štrbac. If you go to Small Štrbac, you should know that you will be quite a long way from where the tour initially started, so it is necessary to organize a car waiting at another place. We headed to Big Štrbac and continued on a path through the dense forest. 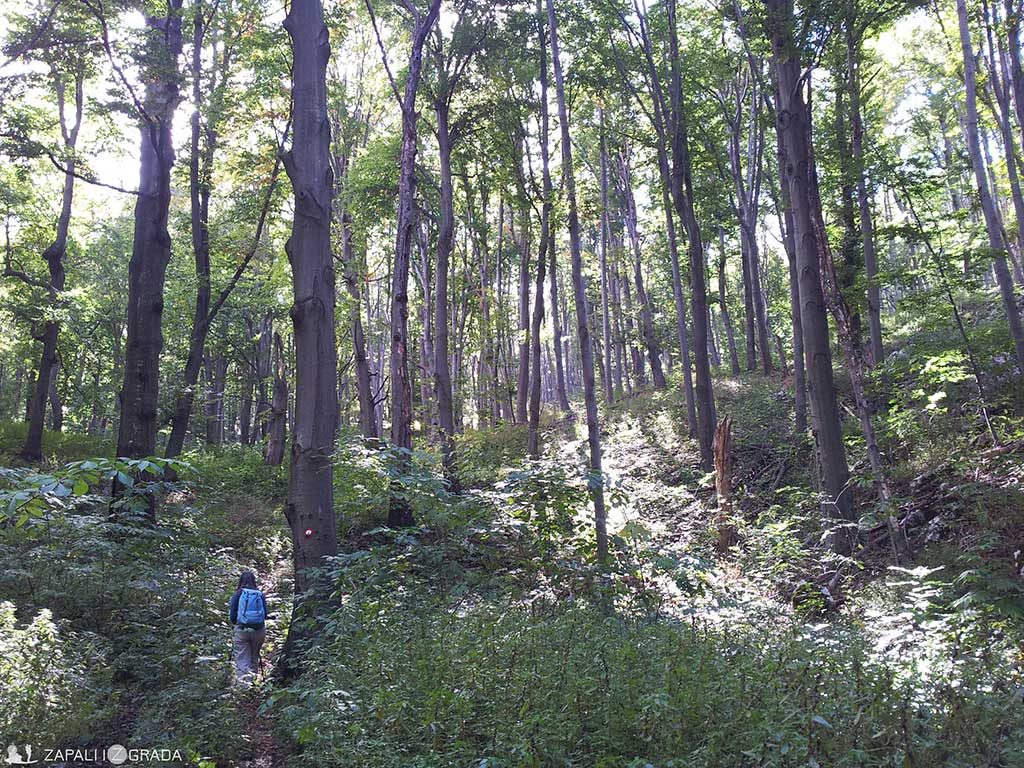 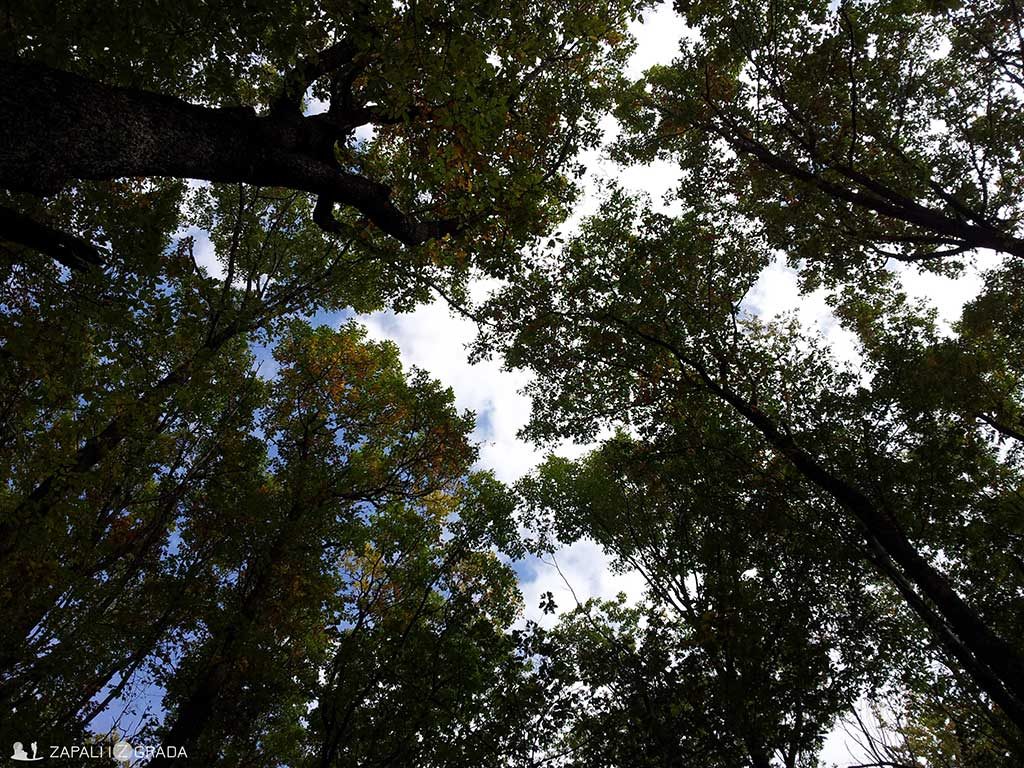 This is the part that requires solid physical preparation. A bit suddenly, one emerges from the woods and gets to the massive rocks of Big Štrbac, at 768 meters above sea level. This is the moment when you will count every drop of sweat and realize what a compensation you were given. The view is incredible, one that cuts deep in your memory and does not fade for years. While you are at about 700 meters above the Danube, you can feel how the water boils down in Kazan. Especially interesting are the ships that look like toy models from here. 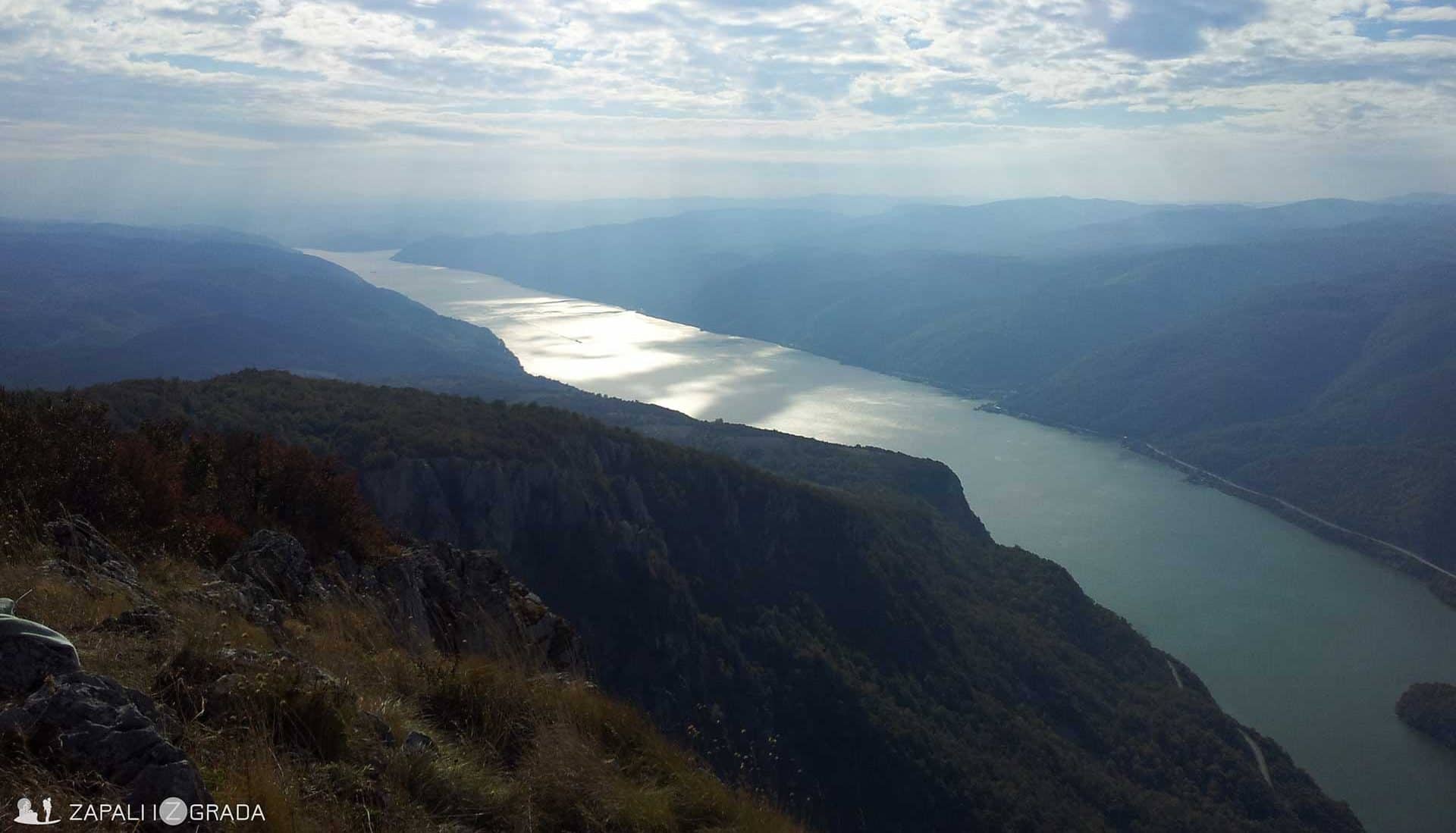 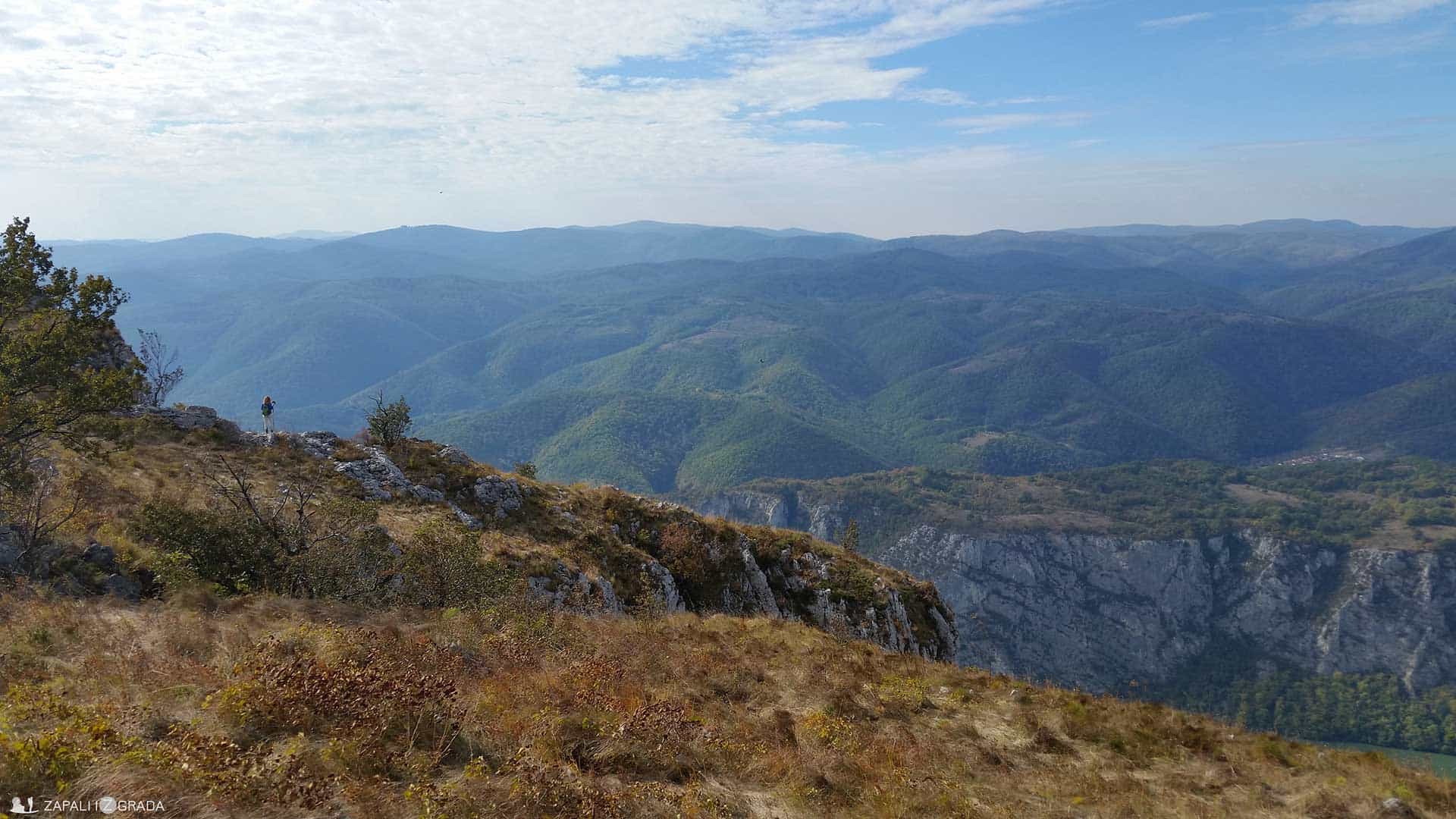 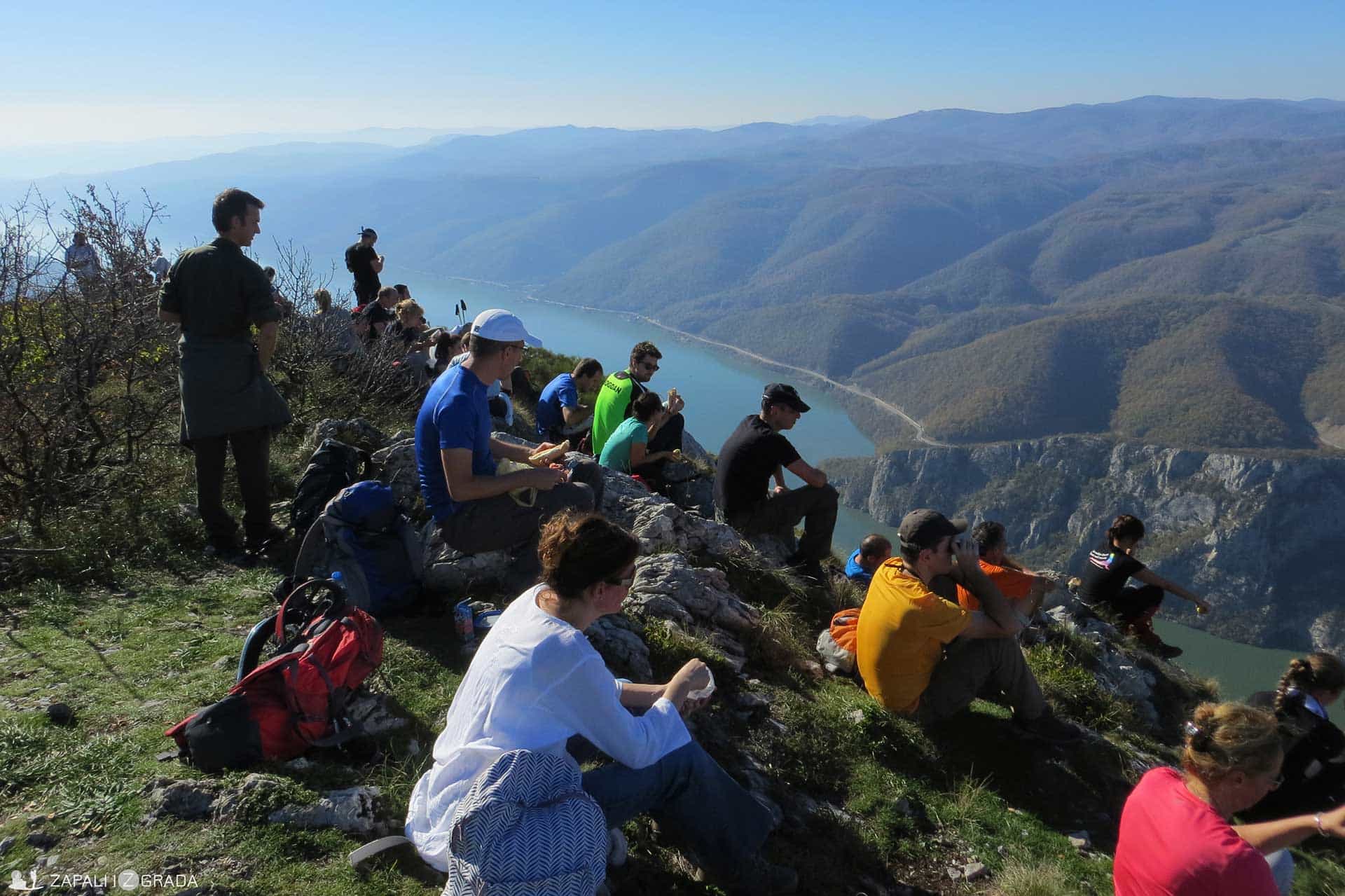 Today, with the advancement of technology, but also the raising of the level of the Danube for 30 meters, the ships can pass one another smoothly. A few years ago, I met a ranger, whom I bored with different questions. So I came upon some information related to this area. One of them is this:

In times before the construction of the power plant, the ships sailing on the Danube were coming to Donji Milanovac to ask the local captains for help. The Danube was lower, faster and intersected with rocks, so only real connoisseurs were able to take the ship undamaged through Kazan. These captains or skippers used the precursor of a traffic light for passages through the “Iron Gate”. It was a wooden contraption that showed if there was already a boat halfway, which was crucial because they could not pass one another.

From the highest peak of the mountain, so often praised in folk songs, the trail leads mostly downhill. Its special charm lies in it not being uniform. At the beginning, there is a dense forest from which the glades emerge, then going through villages, meadows, woods, groves, woods again, and so on. 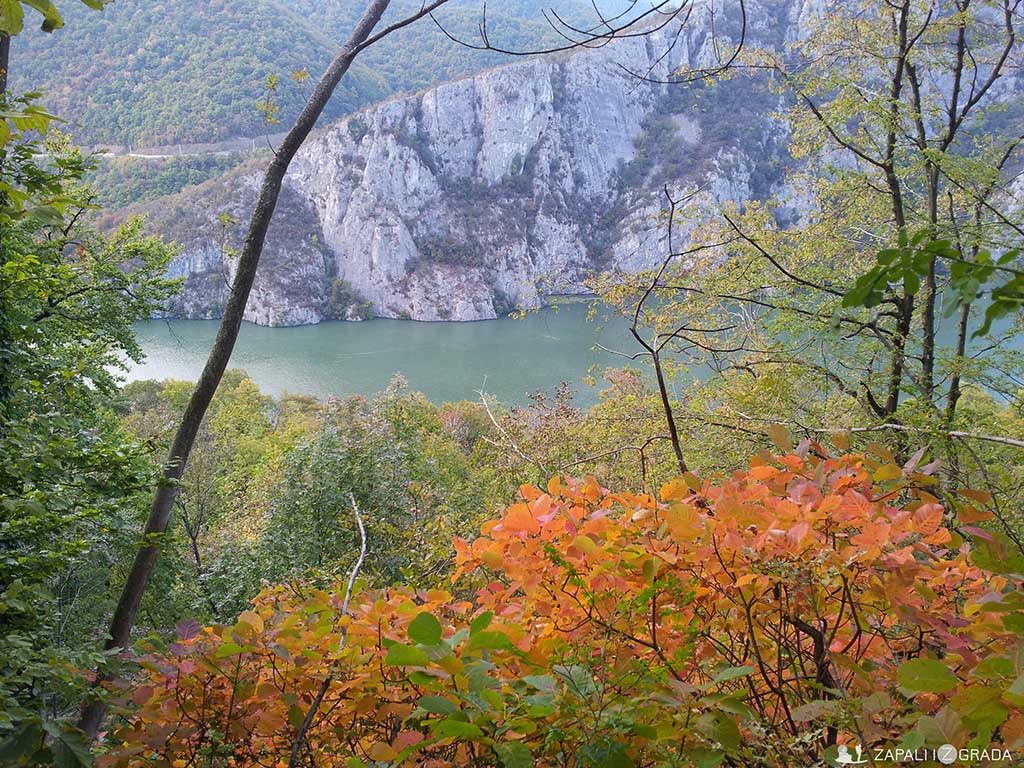 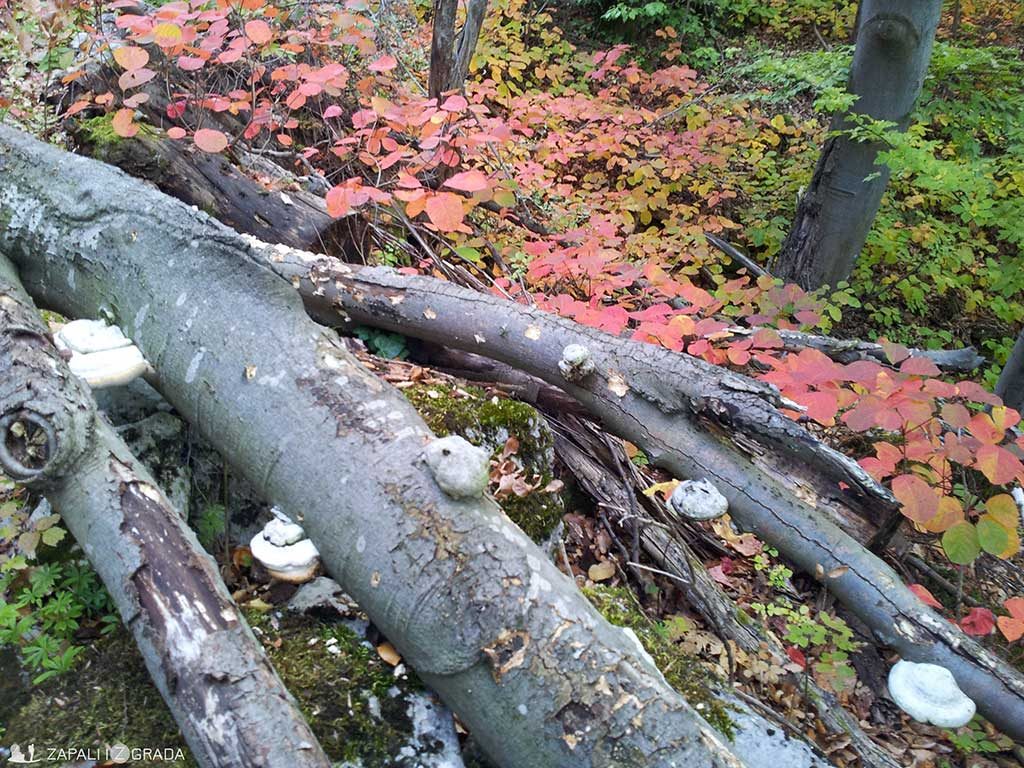 During this time, the Danube sporadically appears, as if to show by its position and size how much more there is. As you come to the end, i.e. the beginning of your tour, the Danube gets larger and closer. 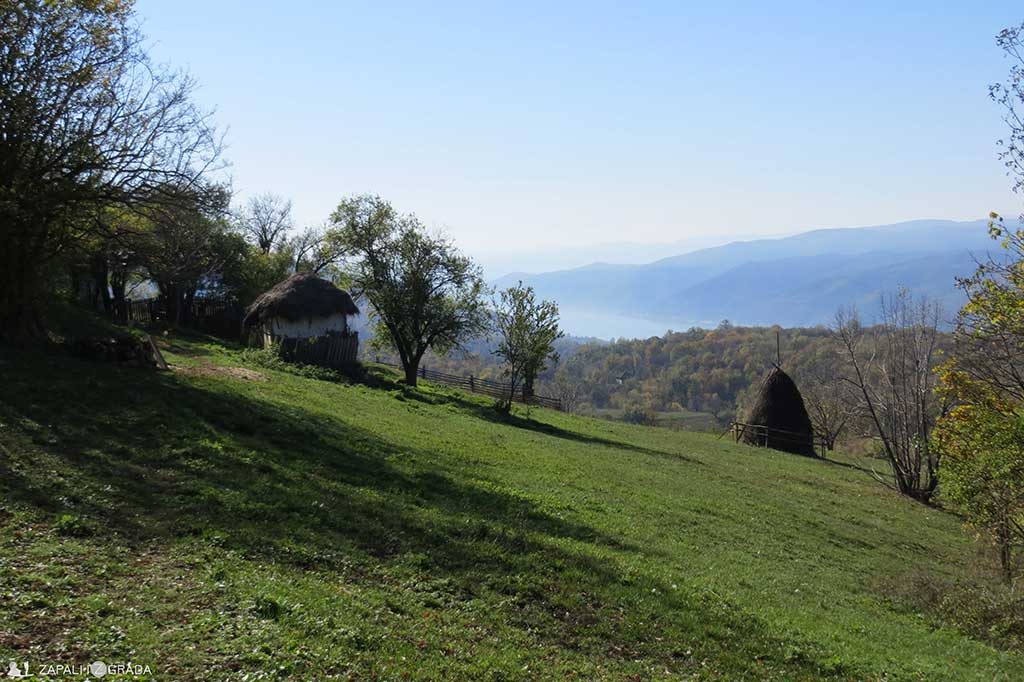 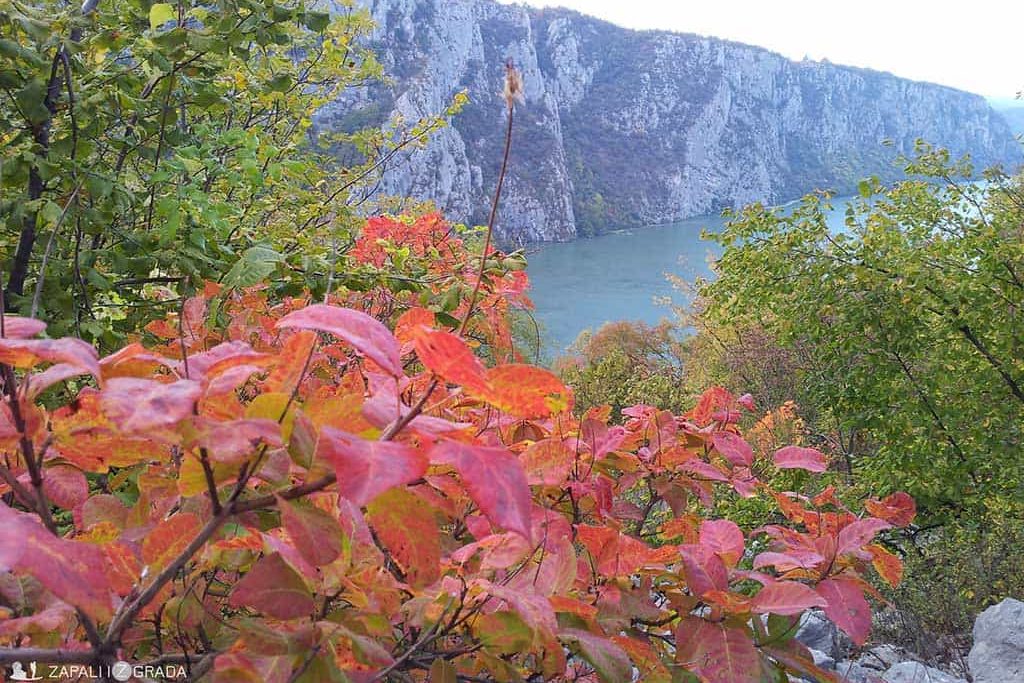 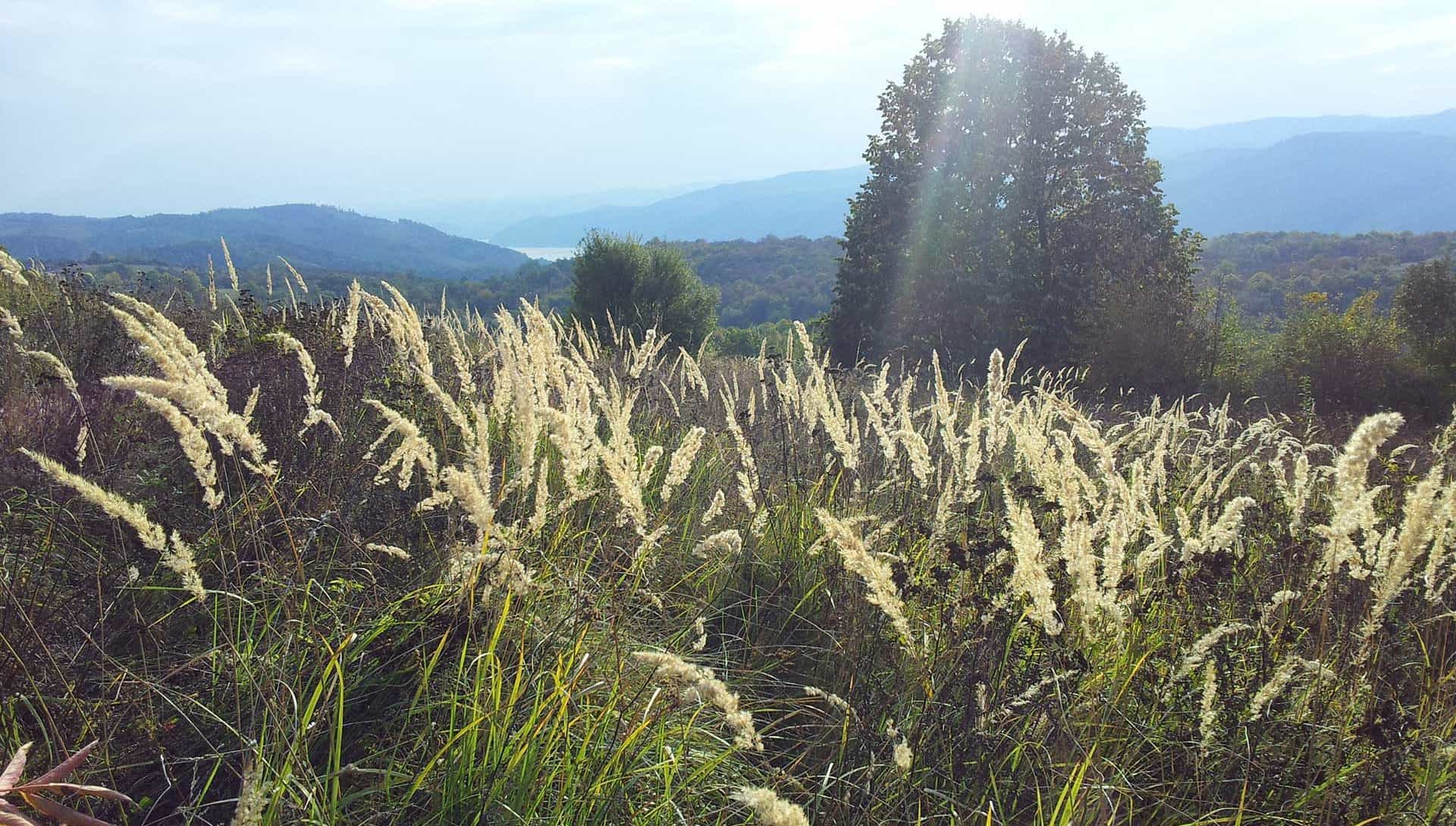 After a long day of hiking, tired, but with a blissful smile on the face, it is best to seek refreshment in the Danube taverns. In many, you will find daily offers of local dish for some decent money, but I suggest that you try the local specialty – grilled cheese.