The fascination with the magic of eastern Serbia does not fade, it only intensifies. The days I spend in grey concrete are often painted with the colourful collage of images of that region, which are stored in my heart, each of them offering a tiny shelter.

Eastern Serbia is a player difficult to handle. It doesn’t care about my obligations at all. It simply pulls some invisible threads, and all of a sudden, my backpack is packed and I’m impatiently tapping my feet, waiting for new experiences, images and emotions. This time, the threads pulled me to one of the oldest mountains in Serbia.

Very similar in origin and pedigree, but again dramatically different in appearance, Veliki Krš and Borski Stol as two towers proudly stand and protectively dominate the neighbourhood of Bor. The imposing jagged mountain rampart, which is known as the Alps of eastern Serbia and its “twin” on the other side, belong to the oldest mountains in Europe. Their limestone boulders, which we know today as Gornjane karst, were once the reefs of a prehistoric sea. A research estimates their stunning age at 277 million years. It gives me the goose bumps to think about all the things they have witnessed, from a marine environment, through mammoths (perhaps dinosaurs), to caravans packed with gold and crazy hikers on their backs. 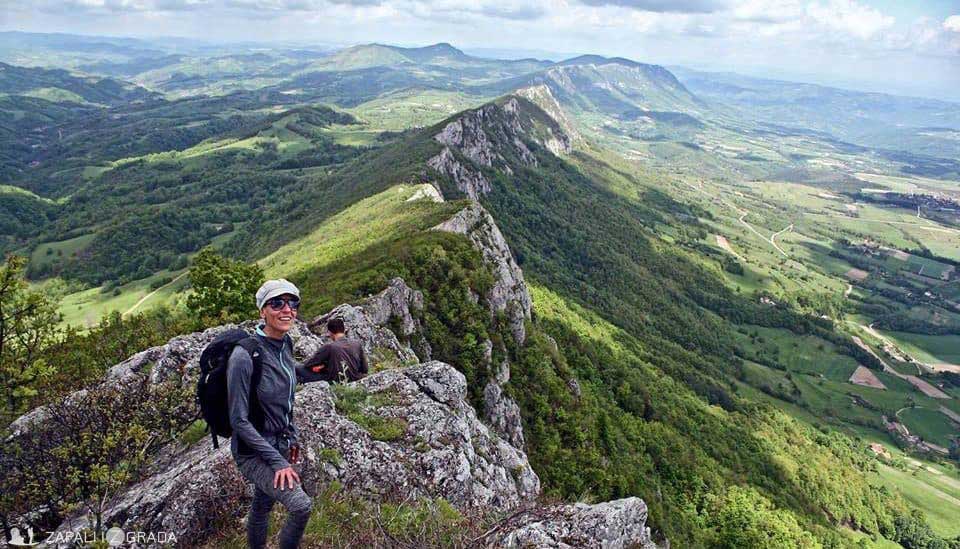 The road leads via Paraćin and Bor. The 3-hour trip felt much shorter, as we enjoyed the sights of mountain Rtаnj and later, of Bor open-pit mines. The final destination is the intersection at Cepa fold, 15 km from Bor. It is the place where the “eyesight” of the two guardians cross and from where you can start your climb on both sides.

We parked the car and started preparing for the action. As we engaged in final preparations, we constantly turned our heads toward the many sharp, pointed peaks. As if they were inviting us to see their grandiosity, pay tribute to the ornamentation. 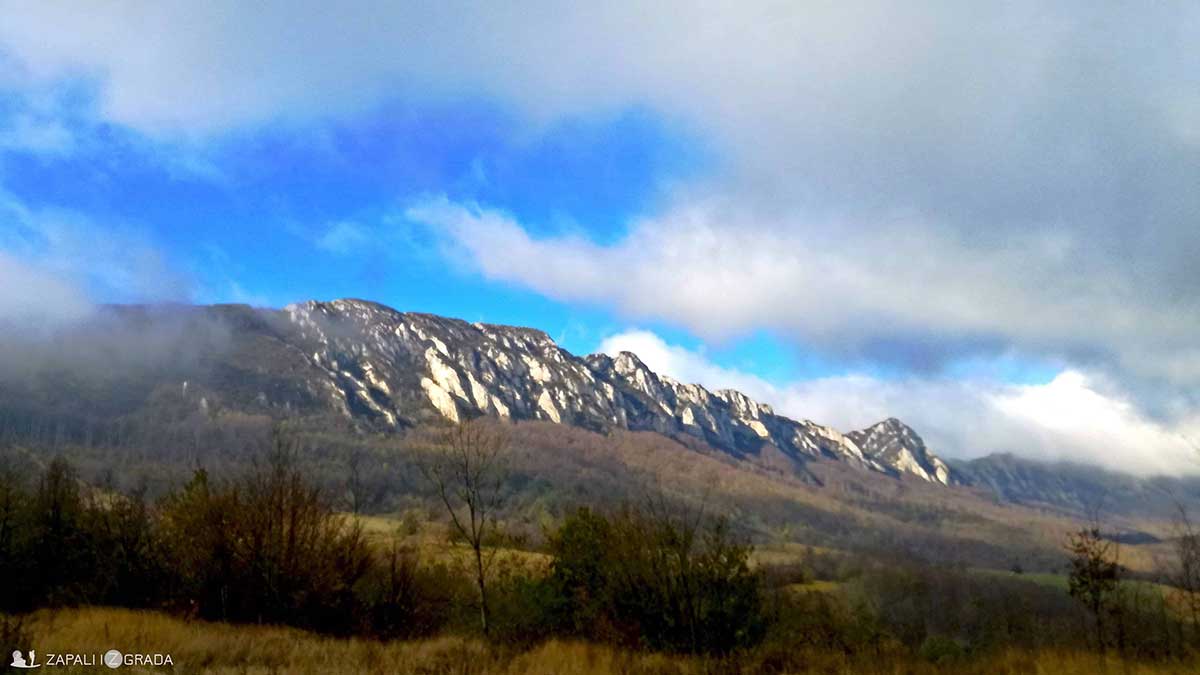 From the intersection, it’s easy to find the freshly marked trail and without any hesitation, we took it. At first, the trail leads through meadows and pastures, and relatively quickly continues to swing through the forest, up to the ridge. As we ascended, we monitored drastic changes at the top: at one point, the glittering mountain “dogteeth” bathed in the late autumn sun, and only a moment later, they would completely hide behind thick clouds. 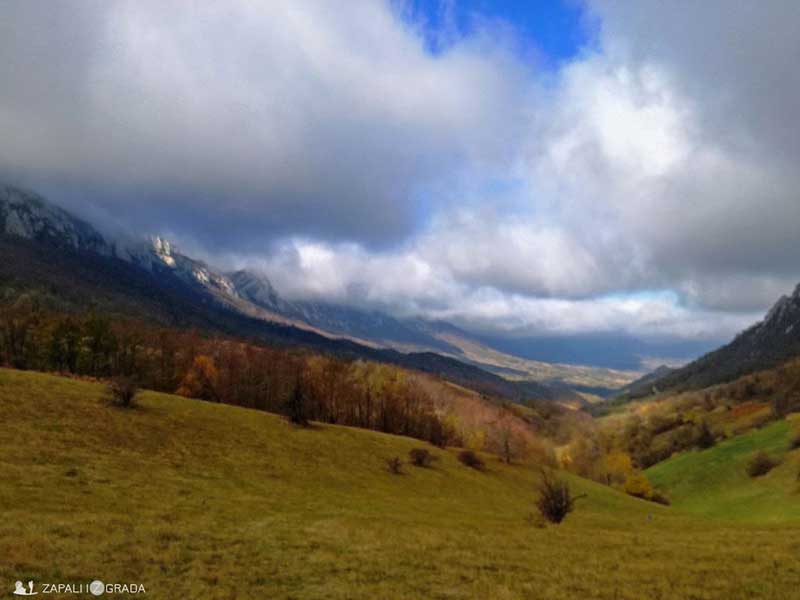 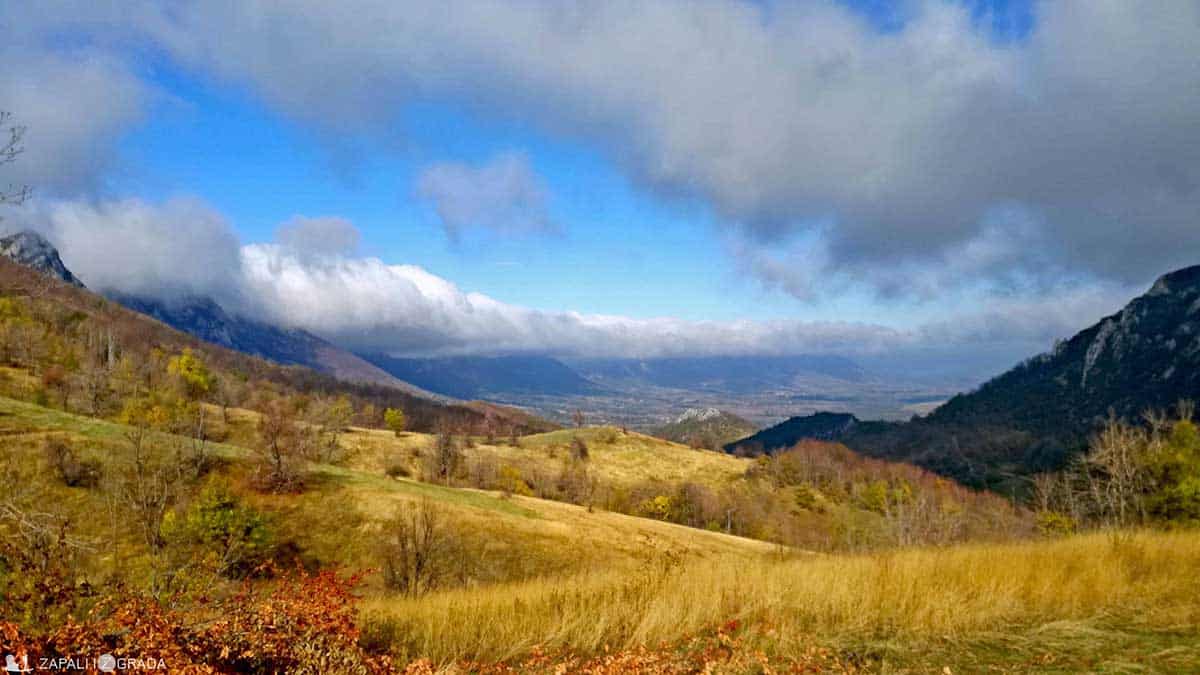 Soon we got into the woods and we could no longer look at the show on the peaks. We knew that the weather was flexible here and we could only hope that everything would be OK when we reach the ridge. Due to the wind rose that rises here, weather conditions are so unpredictable and strange that even pilots avoid flying over Veliki Krš. Especially after the inexplicable 1967 plane crash. 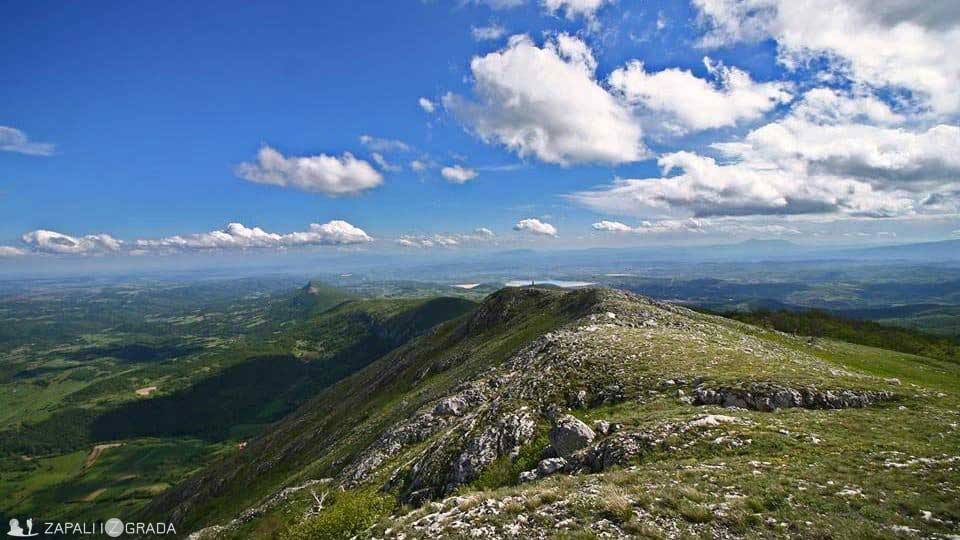 After an hour and a half of light climbing, we come out onto the ridge and are thunderstruck. While the energy of the huge rocky spine completely permeates me, I try to rest my eyes on the magnificent panorama. Bor and Bor lake, Deli Jovan, Stol and many other peaks and waters for which I don’t know the name, are part of the most beautiful postcard that the soul can immortalise from here. Although not too high, 1,148 meters, Veliki Krš is truly a unique mountain in the Balkans. With its appearance and character, it can satisfy all hikers’ requirements. 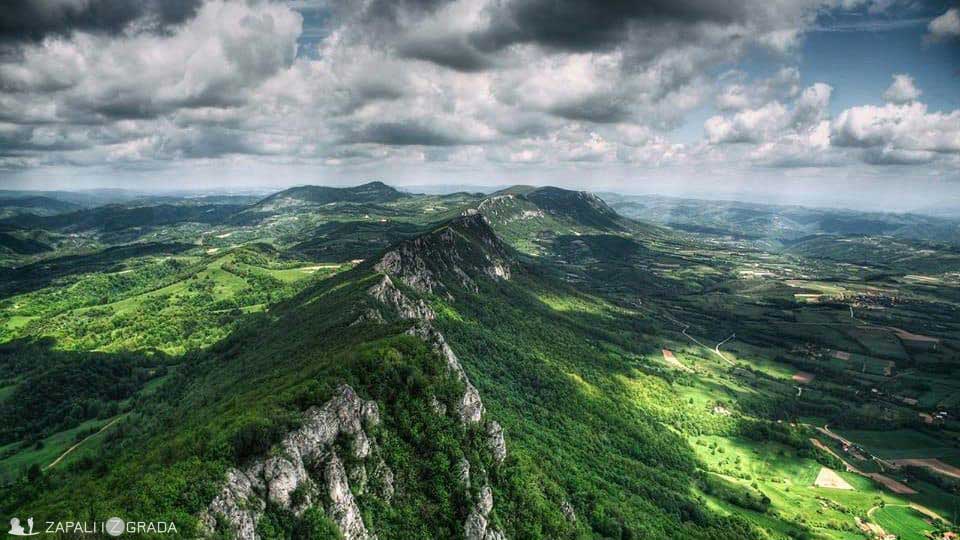 The incredible idea of passing across the ridge felt tempting, but did not seem like an easy mission at all. Later I came across stories, which are at the level of legends, about the complexity and endurance needed for this venture. It takes approximately ten hours to overcome countless, tightly packed limestone peaks. It seems that the “old chap” is not to be joked with. The way back is on the same path, but offers a slightly different perspective on beautiful landscapes. 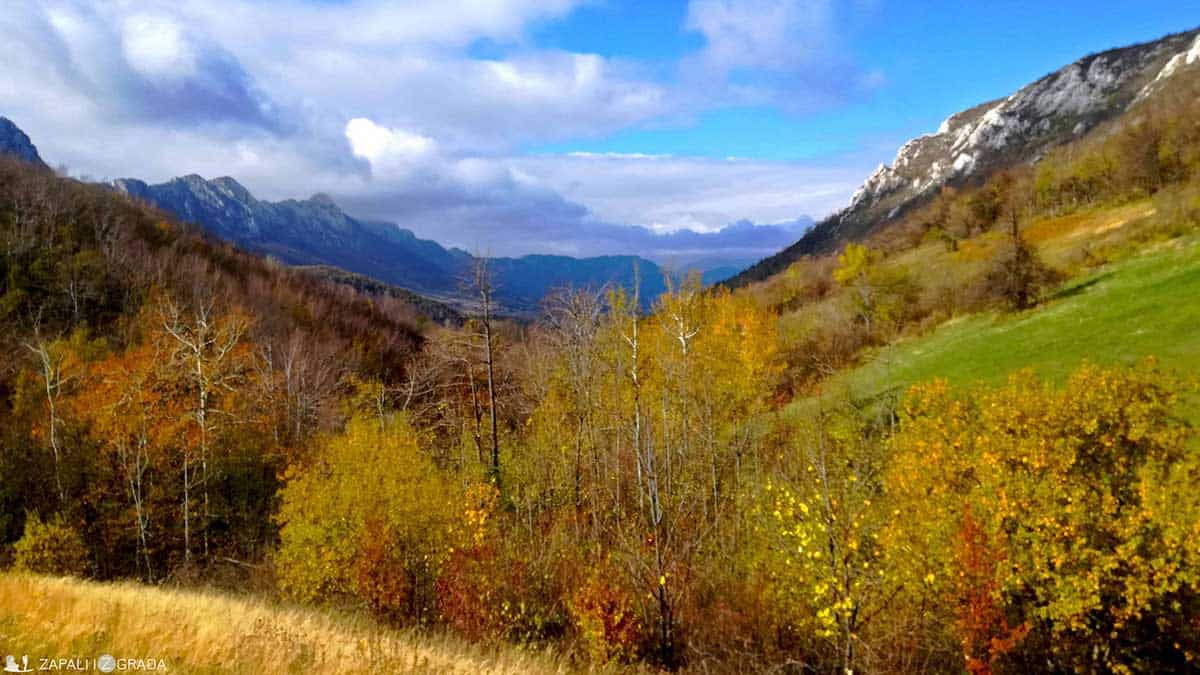 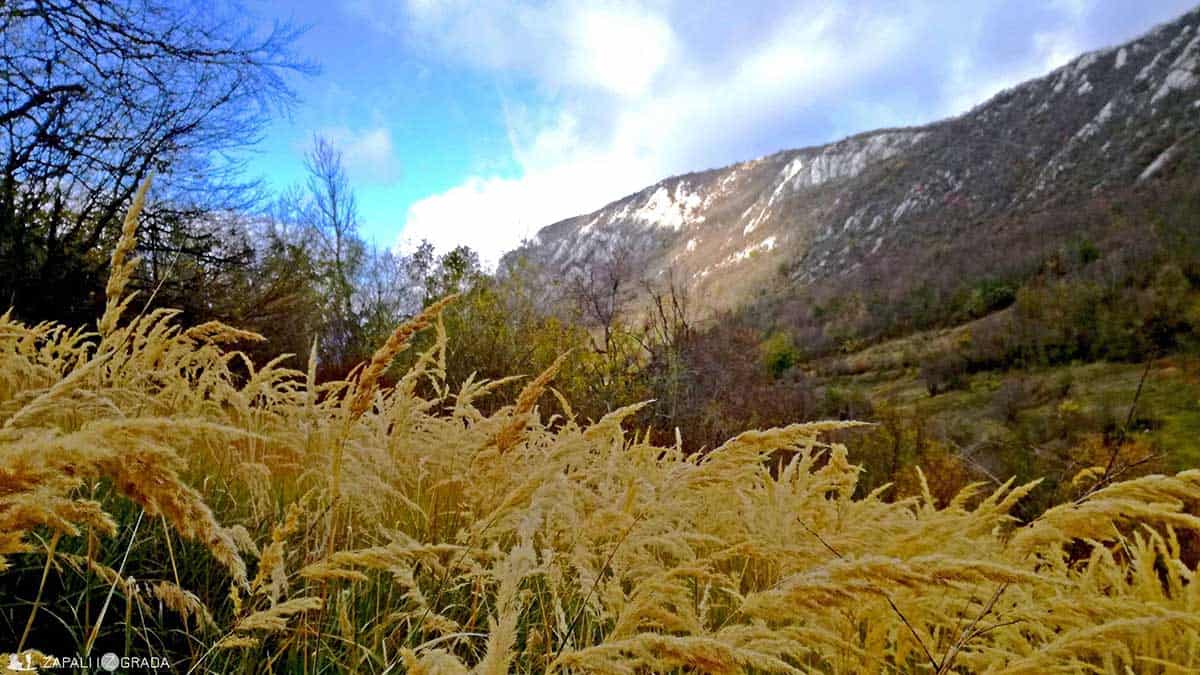 The hike to Stol starts from the same intersection, only diametrically opposite. The beautiful side of this tour is that you can opt for a more relaxed hiking and choose one side. A somewhat stronger tour with about 14 kilometres and 950 meters of altitude difference can be arranged, by climbing both sides. This gives a chance for a fulfilled weekend to recreational climbers and children, as well as to more serious hikers. Also, it is hard to say when is the best time to be here: in the spring, when the meadow is blossoming and the forest is buzzing with fresh buds, or in the summer when everything is swarming with life and the wind brings the sweet smell of nectar, inviting bees to the feast. Or, perhaps – autumn, when trees are decorated in gold and bright colours. There is no wrong choice here.
In about half an hour, following the markings uphill through the forest, we arrive at the foot of Stol and the mountain hut with the same name. 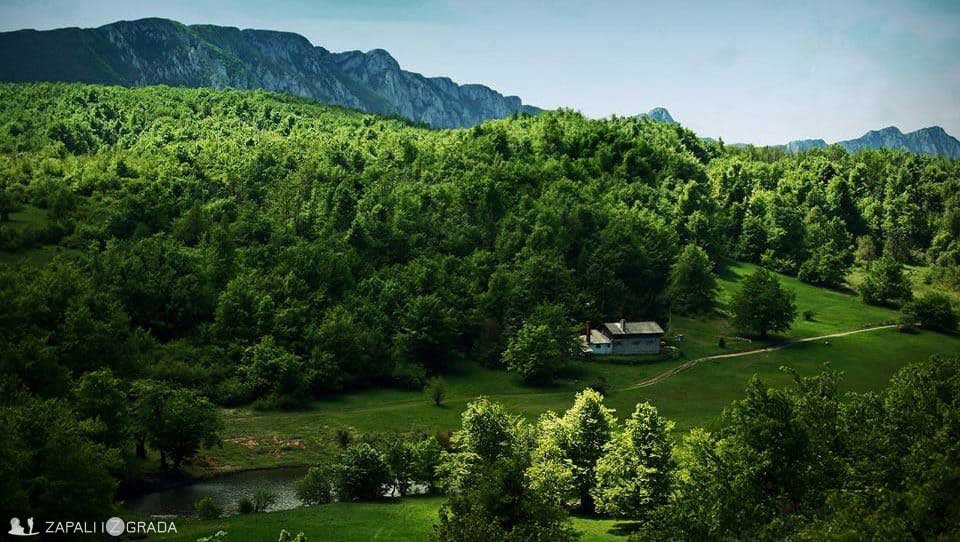 The house is impressive. It is built from stone, standing next to a lake with a view of the Stol. Day after day, the housekeeper Neša welcomes adventurers, and electricity has been introduced recently to provide additional comfort. You cook your own food in the equipped kitchen, unless you announced a larger group. Sleepover is 550 dinars, and phone number for all arrangements +38161 1695748. 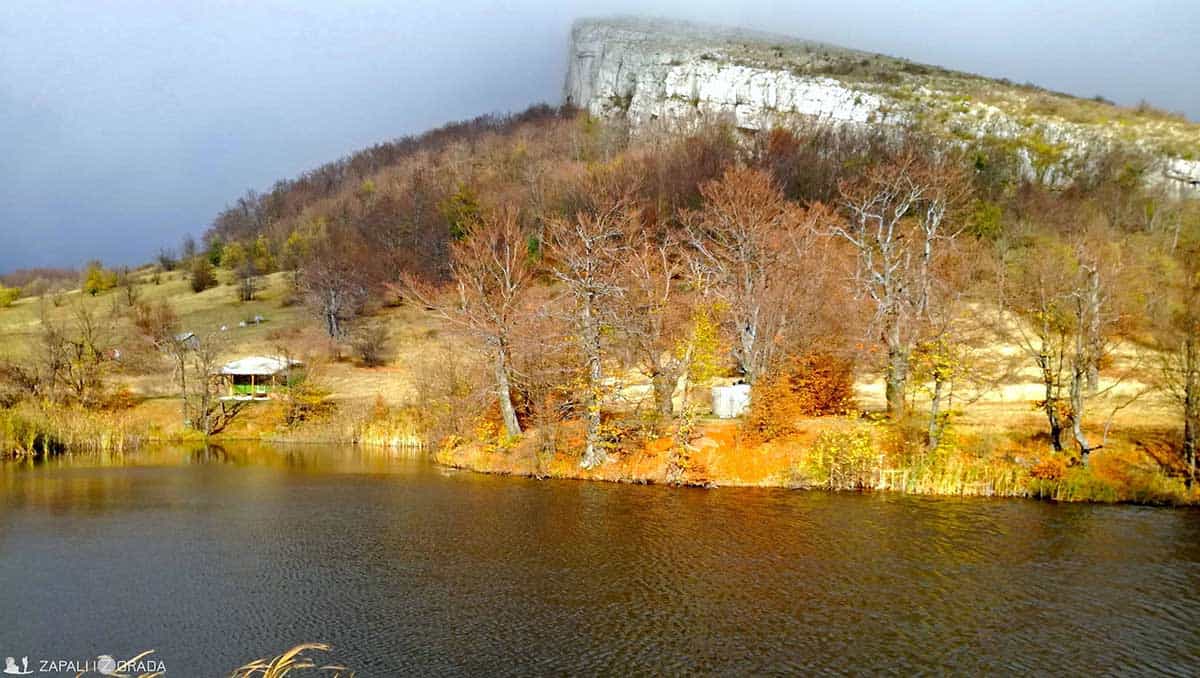 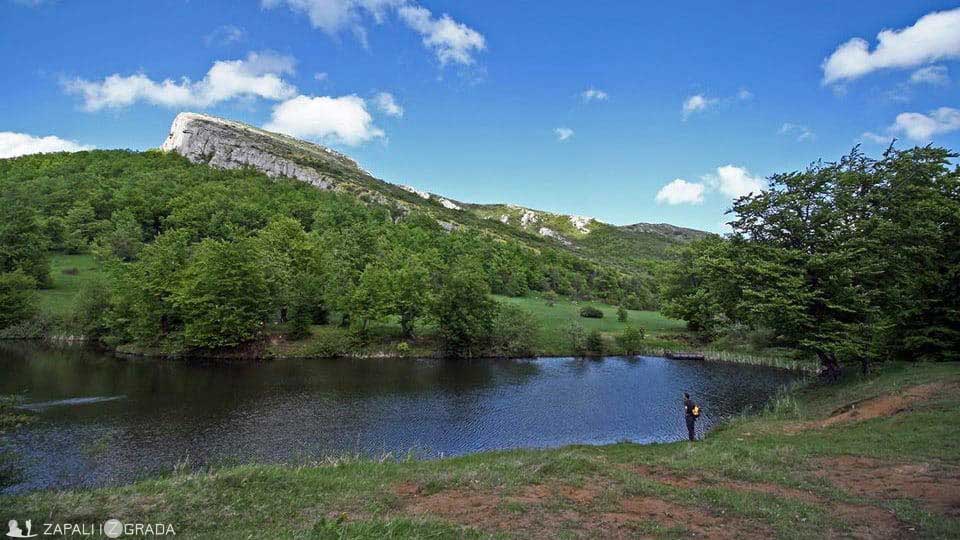 I believe that the mornings are absolutely unreal here, and I will use the first available opportunity to feel it. This time I had other accommodation plans, which I did not regret. 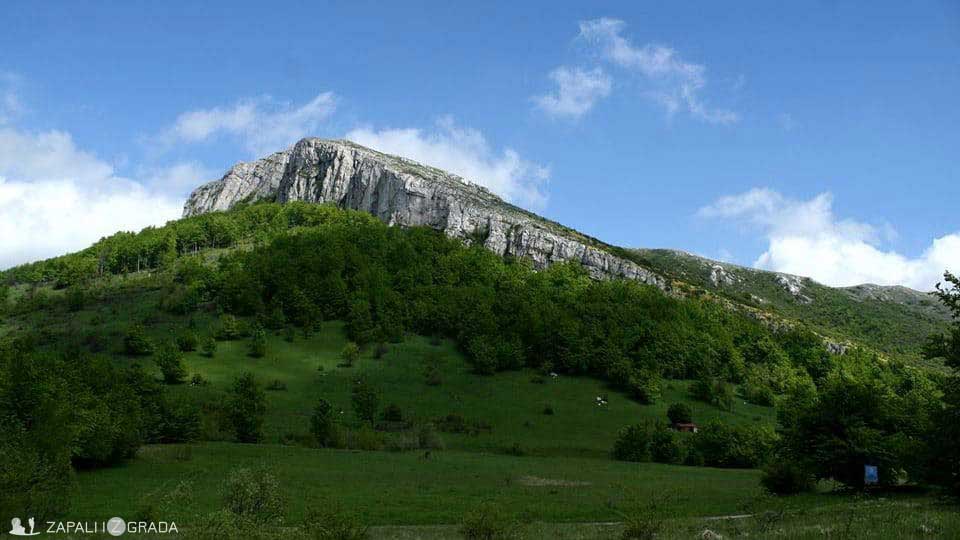 They say that this non-standard, trapezoidal mountain shape, can be seen from as far as Banat. I did not check that story, but it really is a monumental boulder that can’t leave you indifferent. The entire mountain is sprinkled with forests and pastures, and from the height of 1156 meters, as with a giant axe and by the hand of some creative forces, vertically cut cliffs descend. This configuration makes it extremely attractive for hikers, alpinists, paragliders, bikers, scouts … 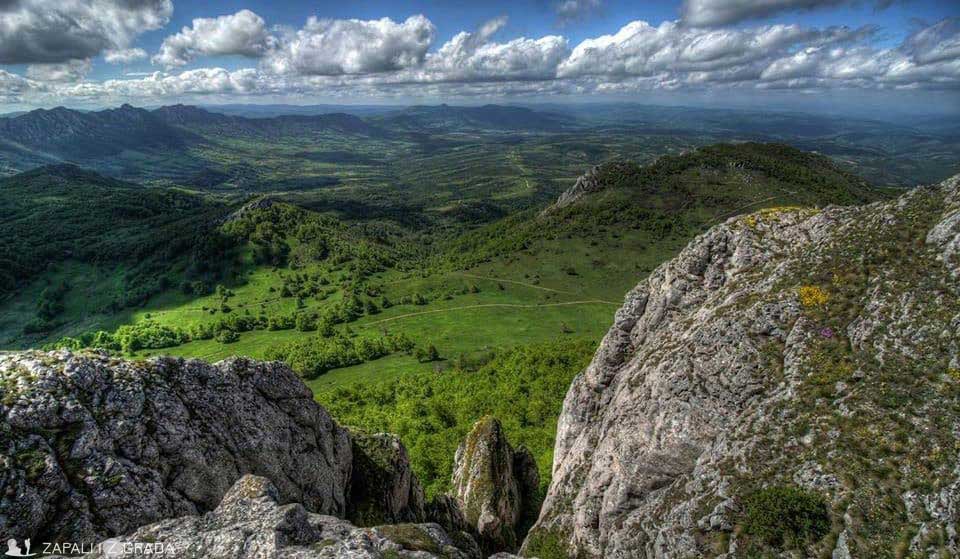 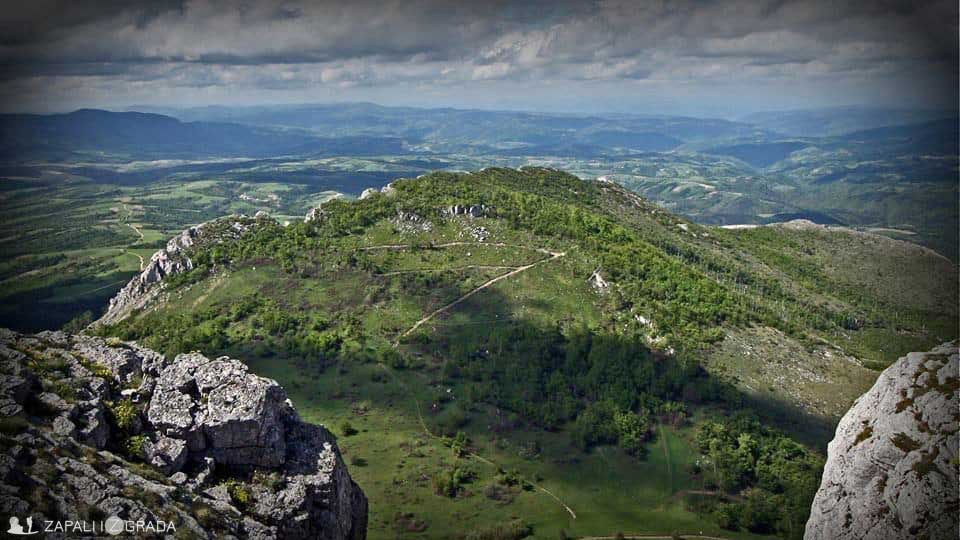 From the house, a marked path leads to the top in about one hour. The path goes right through the habitat of a large number of medicinal plants and various animal species, many of which are relict and endemic. But we did not have the opportunity to meet them. 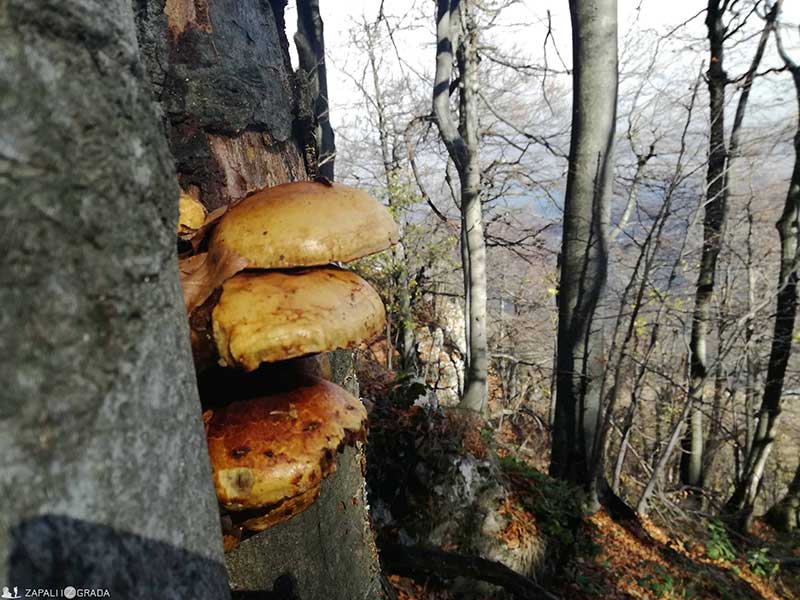 It was quiet, you could feel the winter coming. Nature was preparing for rest, but even in this edition, the stay here is healing. Other than some mushrooms, the only “living” things were the leaves. In various colours, they rustled, twisted and bounced before the arrival of the snow cover, like children getting ready for sleep. 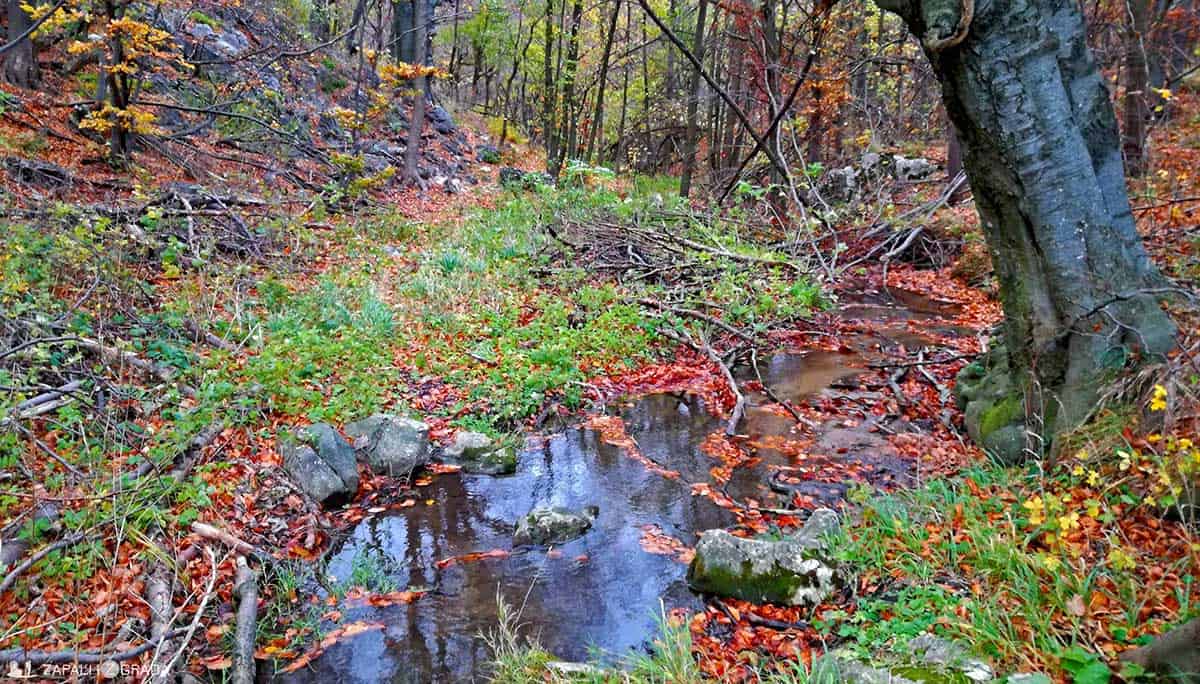 I will avoid being philosophical about whether there is coincidence as such, or everything happens for a reason, but the accommodation I accidentally found was a real icing on the cake of this day. We stayed in the home of Grada and Seka Vanucić, and met two extraordinary people that many in Serbia could look upon. During a pleasant conversation with our charismatic hosts, we learned that they are not only in the tourism business, although their offer of accommodation, food and drinks is at an excellent level. Namely, theirs is a registered household, engaged in the production of smoked cheese. 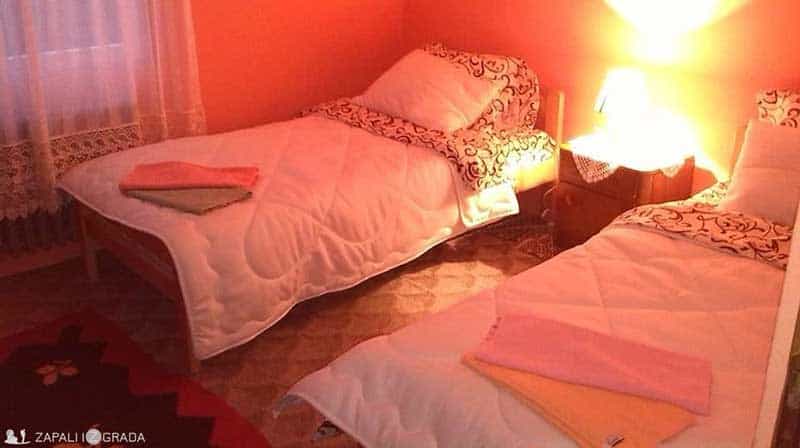 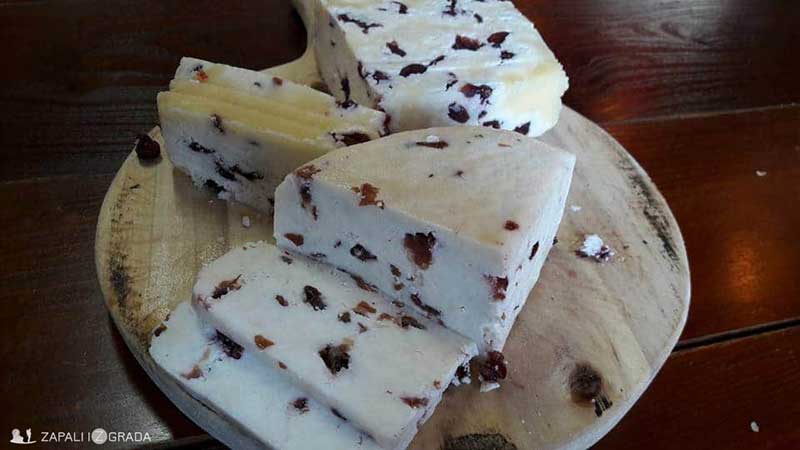 Gourmets can testify about the taste of smoked cheese with sesame, paprika, buckram and similar piquanteries. As cheese can be found in the menus of most prestigious hotels and restaurants in the Bor region, they have a problem to produce required quantities. The tasty meals we were served were extraordinary, and I will particularly emphasize the Vlas specialty of “plašinte“(with a soft Š). For those who are close-by and want to be convinced of the hospitality and cordiality of the Vanucić family, the contact phone is +38160 1489494. We could feast and socialize forever, but Vratna canyon was calling and we had to continue our journey …