While browsing the net, I came across a great article. It provides an expert perspective to people who spend a lot of time in the woods, mountains and canyons – how to behave if a snake bites them, with advice how to act efficiently and calmly. Also, it helps those who find themselves in nature, to feel better if they have an unreasonable phobia of snakes. Finally, I believe, it helps the very snakes, to stop people from killing them just because they are found near them.

The full text is taken from the website of the Serbian Herpetological Society “Milutin Radovanović”.

At this point, unfortunately, there is no consolidated data about the bites of venomous snakes on the territory of Serbia, about bite treatment in medical institutions and possible consequences for human health. In some of the other countries in our region records are better organized – but in those countries snakes are more numerous and people meet them more often than in Serbia. 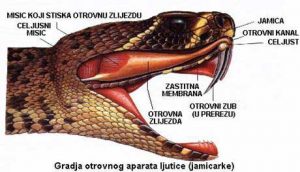 For example, for a graduate work in Croatia data was collected on snake bites in the region of Zagreb and in the southern part of the country, on the border with Bosnia and Herzegovina, for the period between 1998 and 2008. The first region had a registered average of 4.8 bites per year, and the second 1.3; people who were bitten had mainly effects of a moderate severity, with no deaths recorded. For Bosnia and Herzegovina published data exists; for example for the area of Mostar in the period from 1983 to 2006, 389 venomous snake bites were registered. Nearly half of the bitten were farmers; of which over 99% was bitten for the first time, the majority of them on the uncovered part of the body; bites happened mostly between June and September (nearly 65%). Of all the treated people, only one died.

As in other regions under the influence of moderate climate, most snakes in Serbia, including venomous, can be encountered from early spring to late autumn. A venomous bite is distinguished by two stab wounds at a distance of 6 to 10 mm, which is the distance of venomous teeth of our species. Venomous snakes sometimes give a so called ‘dry’ bite, without injecting venom (leaving teeth marks, but they are dry). Such bites only serve to deter attackers. 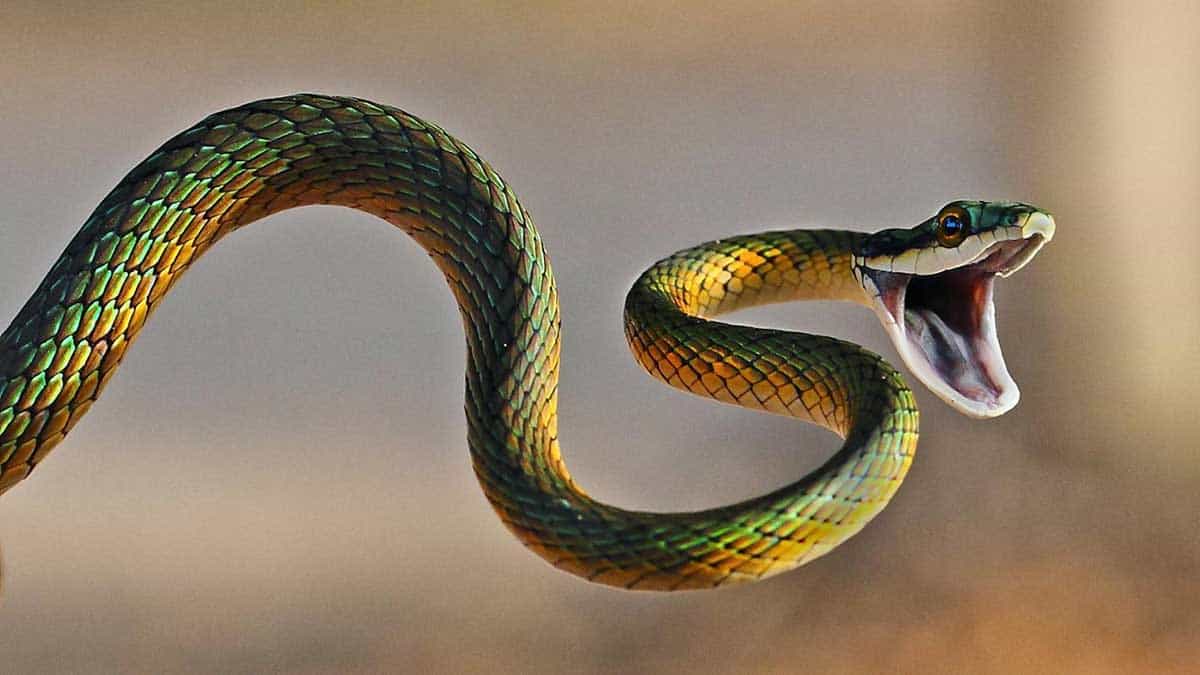 A bite with injecting venom into the wound is usually accompanied by pain and swelling. Signs of poisoning depend on the general health of the bitten person and the part of the body where the bite is. It is more severe if the bitten person is an elderly or a child, and if the bite is located on the head or neck. Symptoms which might occur: sweating, weakness, shortness of breath, diarrhoea, vomiting and loss of consciousness. Bite traces usually bleed; there is quick swelling, numbness and redness. In some cases, mass swelling can occur. First aid should be applied only by squeezing the place of the bite until lymph appears: the wound should not be sucked! (There is a good chance that there are micro-wounds in the mouth, through which the venom can enter the bloodstream.) 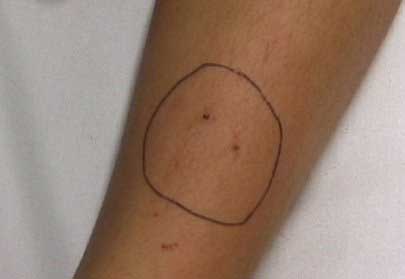 Another thing that can be done immediately is connecting the two bite holes with a fine cut (using a scalpel or a knife), which increases the surface area for venom extraction. The venom that appears on the surface of the skin should simply be wiped off with a towel (the venom cannot penetrate through intact skin). The place of bite should preferably be treated with a warm compress. The bitten person should be given more fluids (water!). Alcohol, coffee, tea, energy drinks or any other medications are not allowed: most of these substances lead to dilation of blood vessels and increase the permeability of their walls (in other words, increasing blood circulation), which facilitates the spread of toxins from the area which was bitten. It is extremely important that the bitten person calms down: panic, sudden movements or running, among other things, can speed up circulation of the blood (and lymph) through the body and therefore only contribute to the spread of toxins.

It is important to immobilize the bitten limb. In some cases (when you are far away from a settlement) you can tie a bandage around the limb (arm or leg) to limit the blood supply. This is done with caution, because in case of inadequate suspension or longer stopping of blood flow, you can cause more damage than the venom. Do not use shoelaces, ropes, etc., but only striped pieces of cloth (e.g. bandage): the aim is not to completely stop the circulation above the bite, but slow it down, by relatively uniformly distributing pressure on a larger surface. Occasionally you will need to release, and then tighten again moderately. After the initial medical treatment the bitten person should be transported to the nearest hospital, where they will be properly examined and taken care of. Antidote (serum) may only be given by a person authorized to do so (the doctor)! Giving the serum on your own and outside of a health institution is not recommended: the bitten person may go into anaphylactic shock, which can lead to death, within just a few minutes!

You must bear in mind that the clinical picture and the general condition of the bitten person will look bad, but the prognosis after initial medical treatment is positive. Cases of death are extremely rare, in cases of bites by local venomous snakes. As noted above, children and the elderly are more sensitive to the venom, as well as those who are allergic, chronically ill or people of lower immunity. 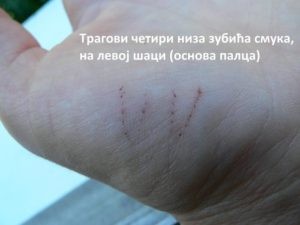 A healthy adult usually completely recovers from a bite and does not feel any after effects.
As medical assistance is not always readily available, preventive measures are the most important thing when talking about risks of venomous snake bites. Before going to unknown terrain you should be informed about the potential dangers – not only about the terrain configuration, the existence of water wells, etc., but also about the living world with which you will inevitable meet in nature. Therefore, equipment must include sturdy footwear and firmer, long pants, and you should strictly keep in mind where you put your hands (e.g. while collecting plants or climbing rocks) and where you stop or sit down, because the legs and hands are the most common bite places. Comments and excuses such as: “It’s the middle of summer, I’m not expected to wear long pants and boots?!” do not fall within the scope of rational thinking and behaviour.

In Serbia there are three species of venomous snakes, belonging to the family of Viperidae: 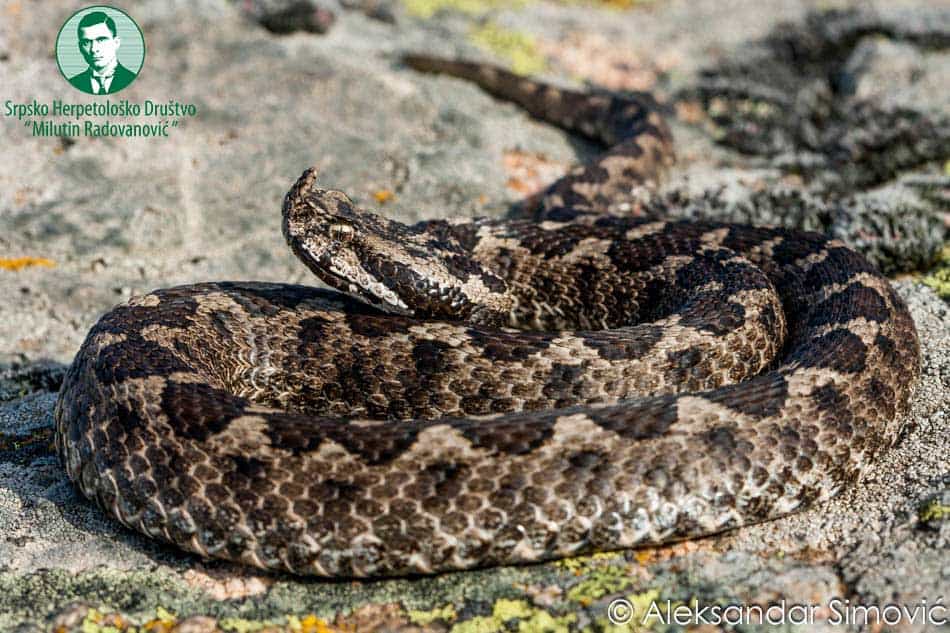 Viper (Vipera ammodytes) is a species that can be found in almost all areas up to 1,500 meters above sea level south of the Sava and Danube rivers. Viper is our most venomous snake. It prefers sunny habitats, such as rocky terrains, open sunny forests, bushes and the like. It is often located in the immediate vicinity of villages. This species is protected in Serbia. 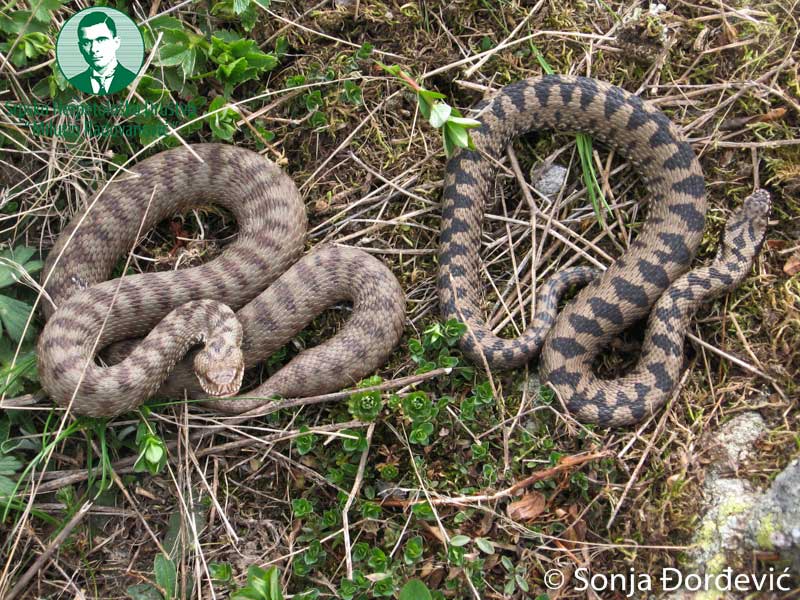 The common European viper (Vipera berus) is a snake with a fairly fragmented habitat in Serbia. Although usually associated with high mountain habitats, these species lives also in the lowlands. In Vojvodina it can be encountered on several locations, such as Fruška Gora, Vršac mountains, Obedska bara and Zasavica. Viper populations here are quite small, so it is unlikely that you will meet their kind. South of the Sava and Danube you might encounter them on several mountains, such as Kopaonik, Old mountain (Stara planina), Šar mountains. In Serbia, the viper is a strictly protected species. 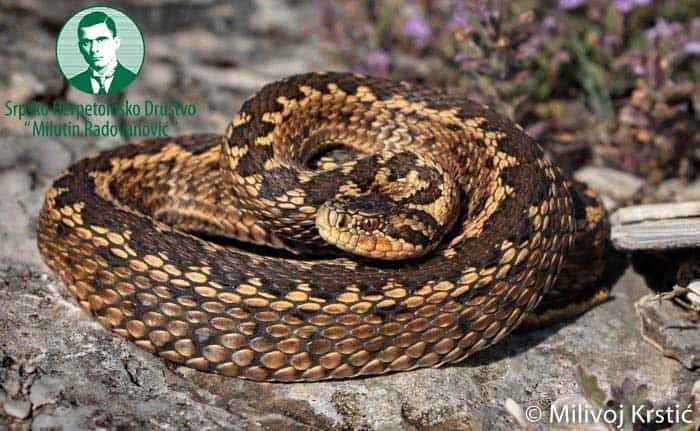 Šargan (Vipera ursinii) is our smallest venomous snake, also the most harmless. In Serbia, this snake lives within a very limited area and you can find them only on the Šar mountain and Prokletije. Šargan is also a strictly protected species. According to the Red List of the International Union for Conservation of Nature, this species is classified as vulnerable.