Rtanj and I’ve been missing each other for years, failing to combine my free time and the mountain’s invite. To be honest, it was always about my free time. There’s an unspoken classification of hikers who never climbed it, sort of “second league”.

I’m not sure which strange forces had the initiative this time, but finally my long-standing desire has been transformed into a spectacular experience. With a little imagination, my climb became a thriller about the mountain, full of unexpected twists and cinematic metaphors. 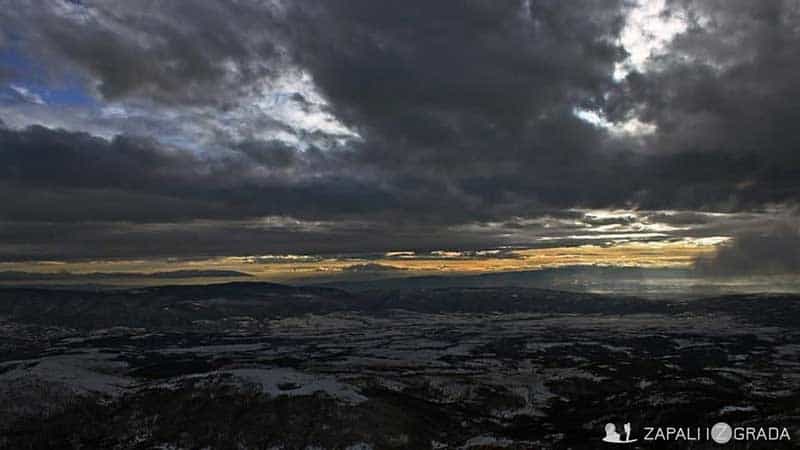 Lookout from Rtanj in the winter (Photo: Dejan Ristov)

Rtanj is located in Eastern Serbia, near the town of Boljevac. The fastest way from Belgrade is the highway to Paraćin, then through Čestobrodica, and after some 200 kilometers, you arrive at the foot of this unusual Carpathian mountain. Rtanj, with its truly unusual form, resembling irresistibly a forested pyramid, has for centuries spurred mystic stories and legends among the people, to which each narrator added some “spices”. So today, you can hear stories about dragons, fireballs, aliens, heliports, tunnels through the mountain … I prefer not to enter the domain of the “eminent” magazine “Third Eye”, but it is true that one view of Rtanj is enough to stir your heart and provide an understanding why such stories exist. This is a destination you simply must visit. 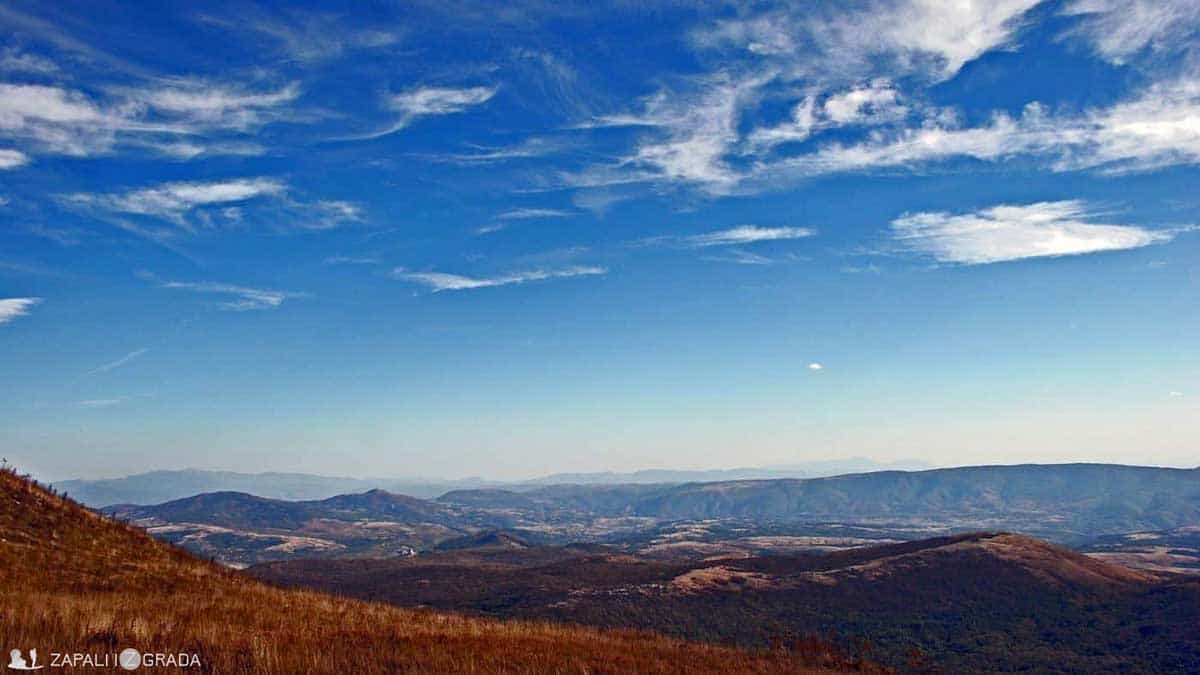 “No mountain nor mountain peak in Serbia make such a deep impression on the observer as Rtanj with its peak Šiljak. It combines peacefulness, size and symmetry. Its main massive ridge, 5,6 km long, calmly rises from a wide base, colossal, and ends with the almost regular peak of Šiljak… It is both full of character and impersonal, the same as all great people. “Jovan Cvijić 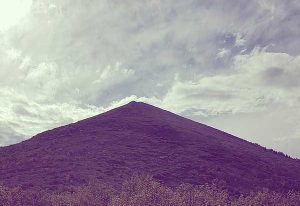 In addition to the inexplicable similarity with the pyramids, due to which many seek parallels with the Egyptian, Mexican and Bosnian pyramidal buildings, Rtanj radiates an incredible energy that permeates you completely. Perhaps it is because of this energy that it is home for a dozen endemic plant species. The most famous are Saturea montana and Saturea satyris, which are 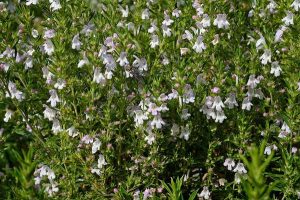 the ingredients of the famous Rtanj tea, good for asthma, bronchitis, cough, but also used as a powerful aphrodisiac. There is a ban on uncontrolled picking of these plants, since this “masculinity bush” has become worryingly scarce. There seems to be a big need for it.

You can climb Rtanj on your own, especially from the south side, starting from the village with the same name. There is a “trodden” path with markings and signs. But I wanted something more. Since I was waiting for so long, I wanted to experience Rtanj in a more impressive way, so I went for the adventure organized by KAUP, entitled “Small rock, big bite” (Small rock is the name of Rtanj’s ridge – Sitna stena), under the guidance of Zoran Vujošević Buca. To conquer Rtanj is never easy, regardless of the choice of path (north, super-north, south side), and we were led by Buca through a less trodden path, meant for persistent hikers, who are ready to “give it a good pull”. 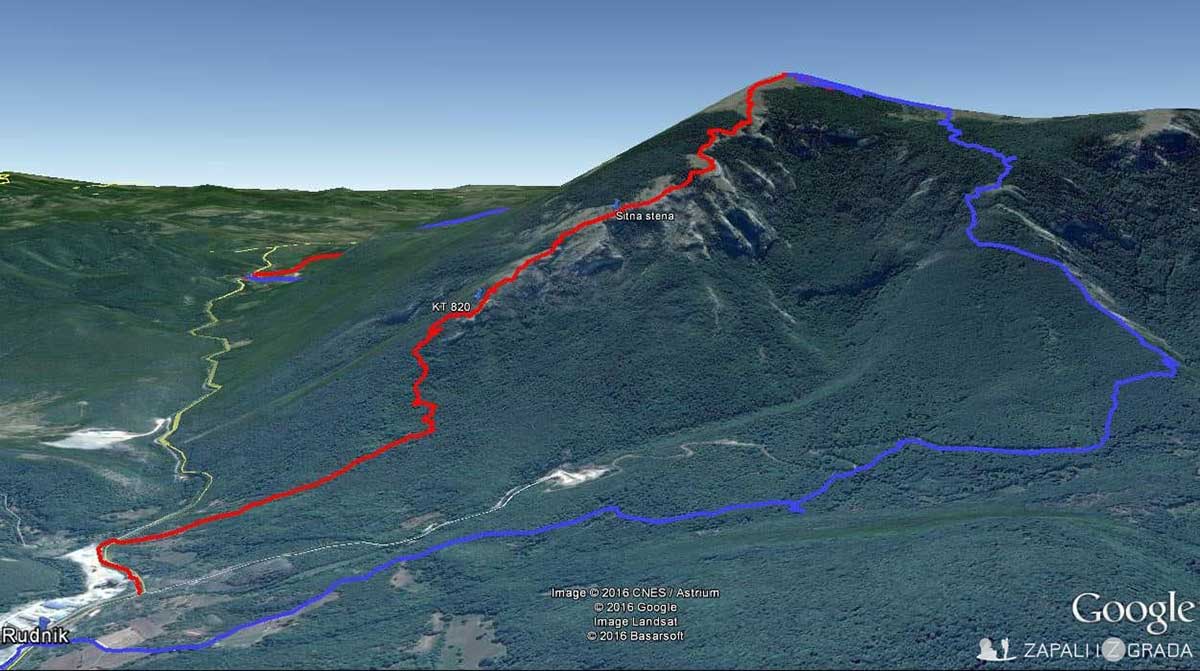 As always, I studied the weather forecast before my trip. It was not favourable, but it changed for the better in the last minute. The rain was obviously not informed about that positive outcome of the forecast, so in the morning, half an hour before departure, the streets of Belgrade were showered. I was hoping that the rain would pass while I was waiting for the minibus. I had plenty of time to hope, since our transportation was over half an hour late and we were not informed about it. The enthusiasm slowly began to decline. The driver finally appeared and we started our mini expedition. The rain was our companion only until we reached Paraćin, so the good mood returned. As if we were able to solve our problems, one by one, with the power of positive vibrations. 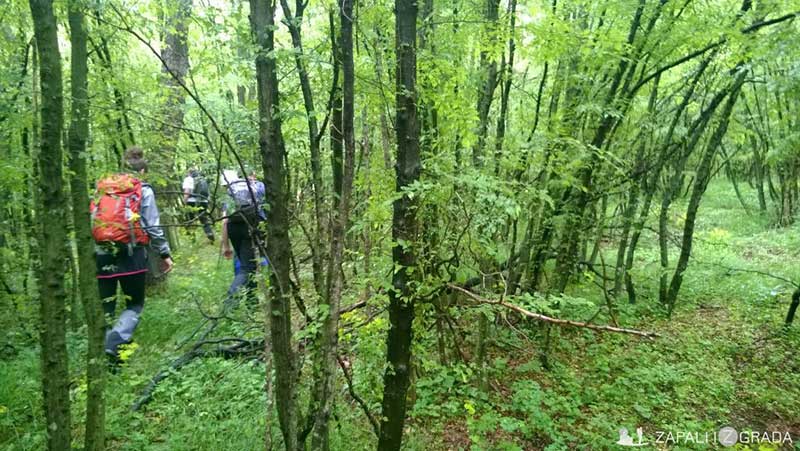 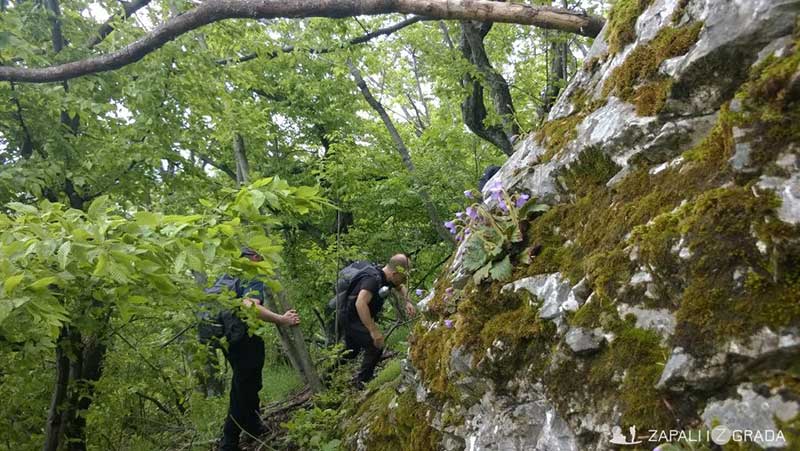 After a three hours’ drive, we arrived at the foot of Rtanj and the forest where the adventure began. We entered a thick, deciduous forest with no trails or markings. This whole region was devastated by the icy rain a couple of years ago, and we came upon fallen trees, blocked passages and similar difficulties. There were both experienced and amateur hikers among us, but we all “clung” and conquered one meter at a time. We knew that Rtanj would draw out the maximum of our efforts before providing the same amount of satisfaction. And as we dragged ourselves, breaking through and overcoming 400 meters of height difference in such an environment, I remembered the movie “Romancing the stone” and the whole action was given a metaphorical tone.

As we left the forest, the situation changed completely, as if we were moving to the second level of a game or as if another movie had started. There were no more plants, everything was out in the open, and in front (or above) us there was an “angry” steep ridge full of trials. We were supposed to climb some serious rock walls. I am convinced that some Lord of the Rings scenes could have been filmed on this side of Rtanj.
Not long after we got out of the forest, when Rtanj really started to “drain us”, one of the hikers got sick. We immediately started figuring out how to help her and still continue the expedition. She interrupted our planning by pulling herself together. Her willpower activated her perseverance and she made it to the top. Well done, another problem was overcome.

The lookouts of Rtanj are fantastic, each in a very unique way. Of course, as you approach Šiljak, everything is laid out in front of you. It’s almost incredible how far the view extends from Rtanj. On one side, lay Malinik, Lazar canyon, Borski stol, Deli Jovan, Majdanpek and Bor. On the other side were Suva planina, Stara planina, Ozren, Sokobanja, and even Kopaonik could be seen.

Walking across the ridge of Sitna stena is an escape from the city and everyday busyness and staleness. It also confronts us with the ultimate opponent – the self. To climb Rtanj, you need to overcome thirst, find inner strength for all the heights in front of you, spend all energy supplies stored in some hidden cells.

Just like in kung-fu movies, where the main hero in the most difficult moment remembers the sensei. As I tried to recover my energy levels and my breath, I enjoyed the infinite game of the clouds and Rtanj. It’s like they’re attracted by the mountain by some invisible threads and then shattered against its sharp rocks. The broken amorphous cloud remnants skilfully climb the mountain and reshape in various forms.

In order to reach the peak Šiljak, you need to have 4,5 km of constant climb and overcome a 1250 meters’ height difference. That’s not easy at all. Under some criteria, overcoming such an altitude is considered a high mountain action. I advise you not to take such an ascent with a full stomach, to take small amounts of water on a regular basis, and recover your breath when necessary, by stopping and enjoying the sights.

After overcoming all the obstacles, we arrive at the Šiljak, and with a full heart I stand at 1,565m, a place once occupied by the chapel of St. George. It is very difficult to describe the view from the Šiljak. At first, it leaves you speechless. When you finally find the words, the first thing that comes to your mind is pride – because you stand on the “roof” of eastern Serbia, and satisfaction – for all the sweat you lost while getting there.

In 1935, after the death of Julius Munch, the owner of Rtanj mine, a chapel was built and financed by his wife Greta. Over 1000 workers took part in the construction and all the material was transported to the top on donkeys. The mine was “democratically” appropriated by the Partisans after the Second World War. A few years later, gold diggers destroyed the chapel, the former symbol of Rtanj, with dynamite, believing that the gold and diamonds of the rich Jewish family were hidden there. 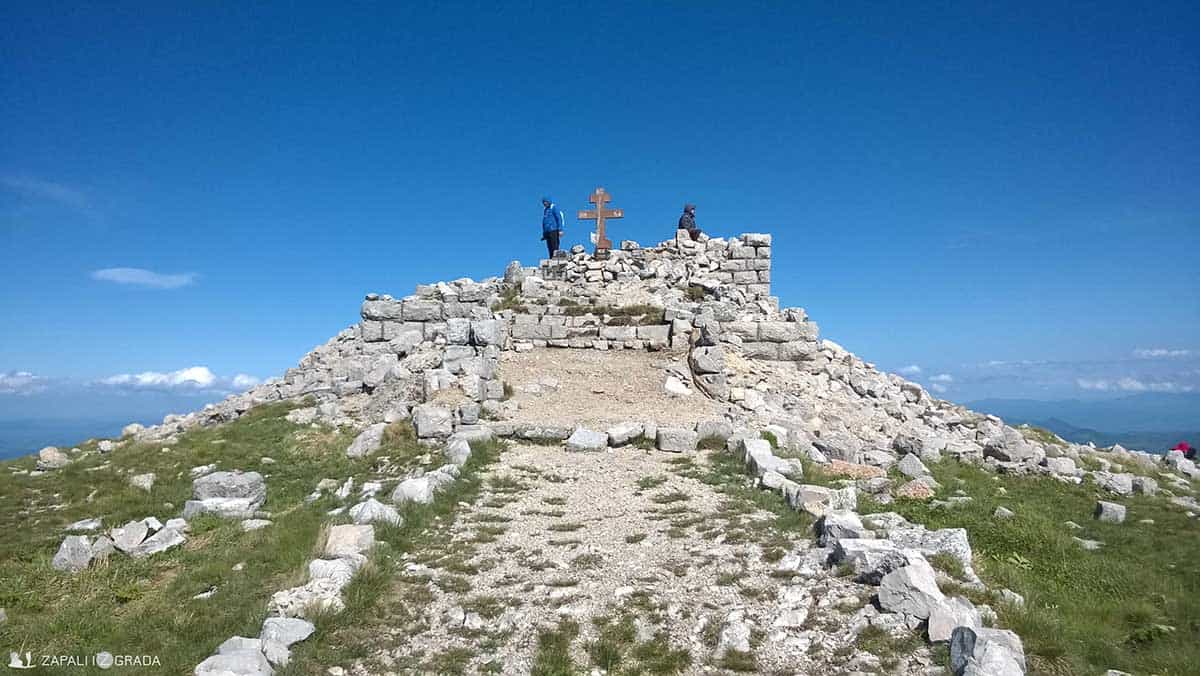 We descended along the south side of the mountain, towards the village with the same name at the foot of the mountain, metaphorically leaving our footprints across the whole mountain. We used an existing hiking trail, so the remaining 6,5 km and 1000 meters’ height difference were completely relaxed.

Just before entering the village as our final destination, Šiljak appeared behind a portion of the wood, all dignified and sunlit, and one of the hikers exclaimed in amazement: “Man, look where we have just been!”