Beyond the seven hills and seven mountains, close to the (recently drawn) border between Serbia and Montenegro lies the Kamena Gora village. Tucked away, sleepy, hospitable. This place represents another border. This is where the reach of the evil tentacles of civilization ends and the surreal dealings of nature begin. Stone mountain has been proudly standing, acknowledging its role of scout, of former crossroads of caravan routes and source of life for centuries-old highlanders. This fabulous beauty possessively keeps many stories and legends while providing the locals with incredible benefits.

Probably one of the most beautiful villages in Serbia is located approximately 25 kilometers from Prijepolje. When you reach the “city on the Lim” turn towards Pljevlja and Durmitor. After about 12 kilometers you will see the signboard for Kamena Gora. Turn left and cross the local road. It’s a bit narrow, but well paved and without significant holes. After 10 kilometers you will reach the center of the village. Follow the signs, to reach the specific hamlet where you plan to stay. Unfortunately, since I stayed only for a weekend, I did not have the opportunity to visit all the different hamlets. Fascinated by the incredible beauty of this place, I know for sure that I will return and will continue this story. 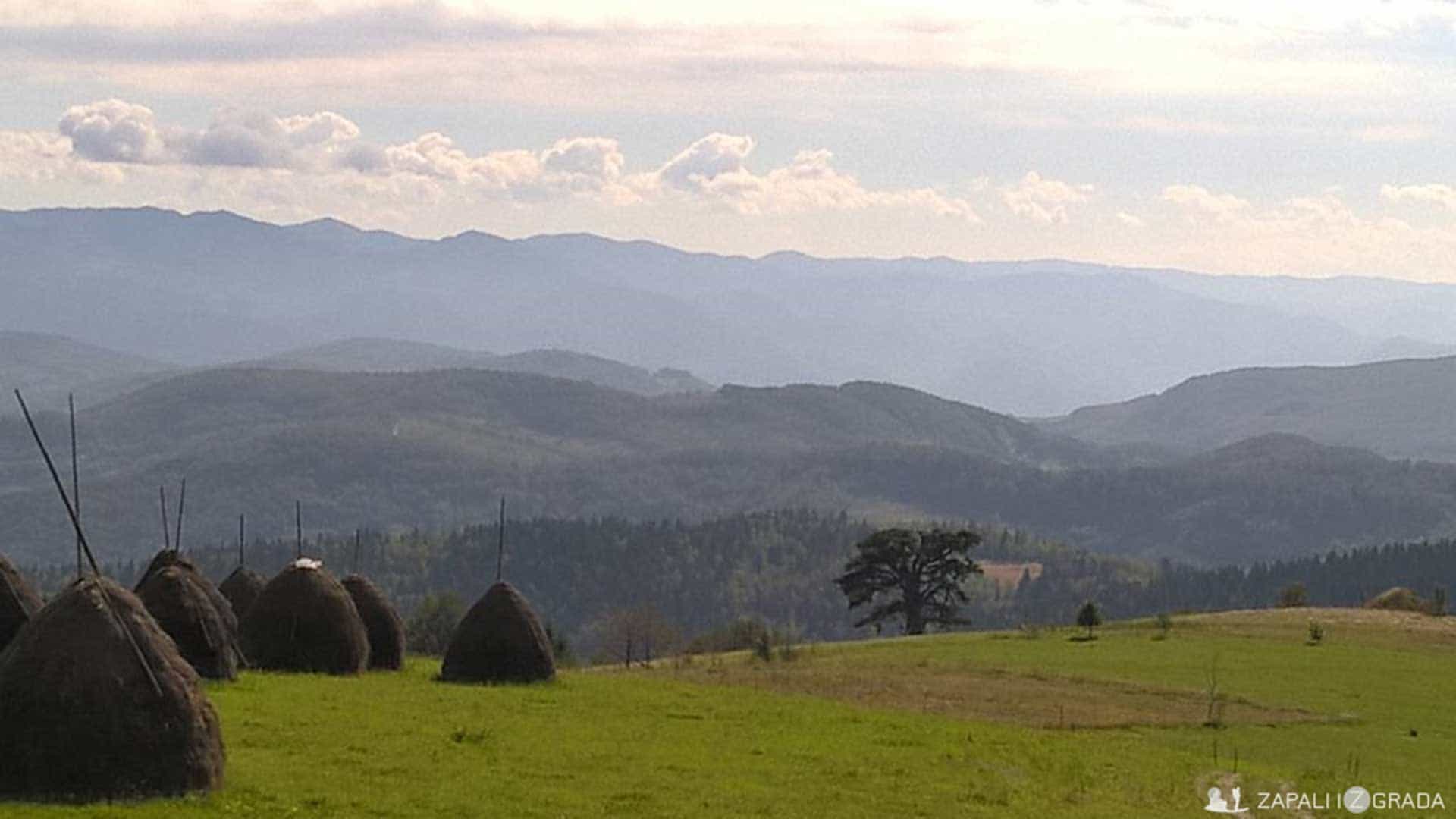 When we passed the only local inn, we just kept right, taking a gravel road to the hamlet of Brdo. The first thing you notice when you arrive is the air – the oxygen that literally comes to life in your lungs. No wonder this place was declared a health resort, while still in the Kingdom of Yugoslavia. As if the rose of winds, while crossing the meridians, saved the best for Kamena Gora. 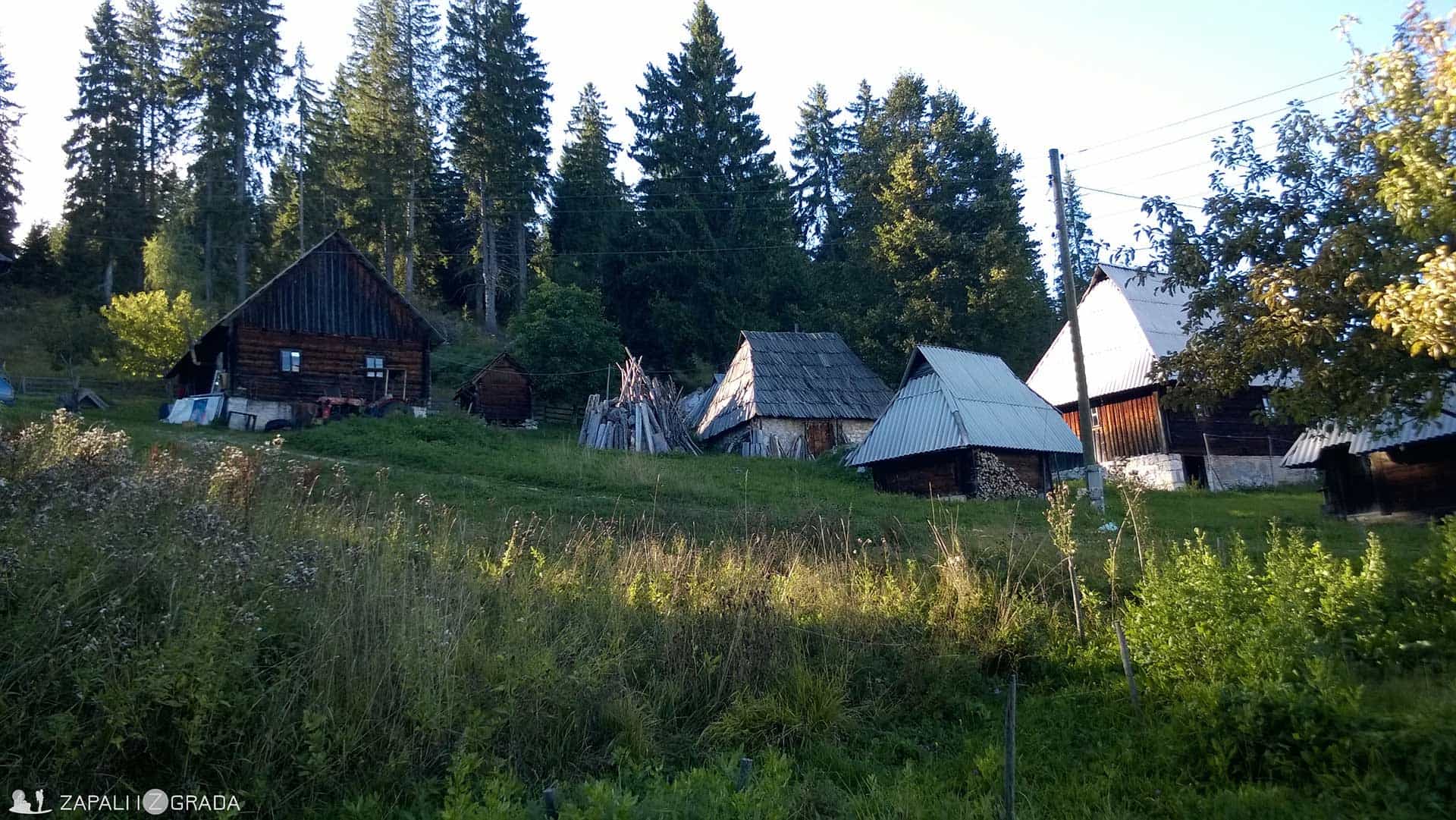 The hamlet is made of five, six ancient houses and a camp which is still under construction. The camp “smells” of serious potential and I can’t wait to see it shine in all its glory. The sleeping huts – bungalows already exist, but the locals are working hard to finish the diner room, the fireplace and the kitchen, which should be the central place of this idyllic venue, rounding the offer. Next to the camp there are rustic rural buildings, to the satisfaction of all who are looking for the remnants of ancient times.

We settled into a house built in 1920, and this unusual authenticity gives a special charm to the place. Of course, we were greeted with a warm welcome, a smile, some coffee, plum brandy and tea made of local herbs. This area abounds with them, over 200 species that can be found in the near and far surroundings. All the locals can be distinguished by a firm determination to survive, a “big heart” and a talkative mood. 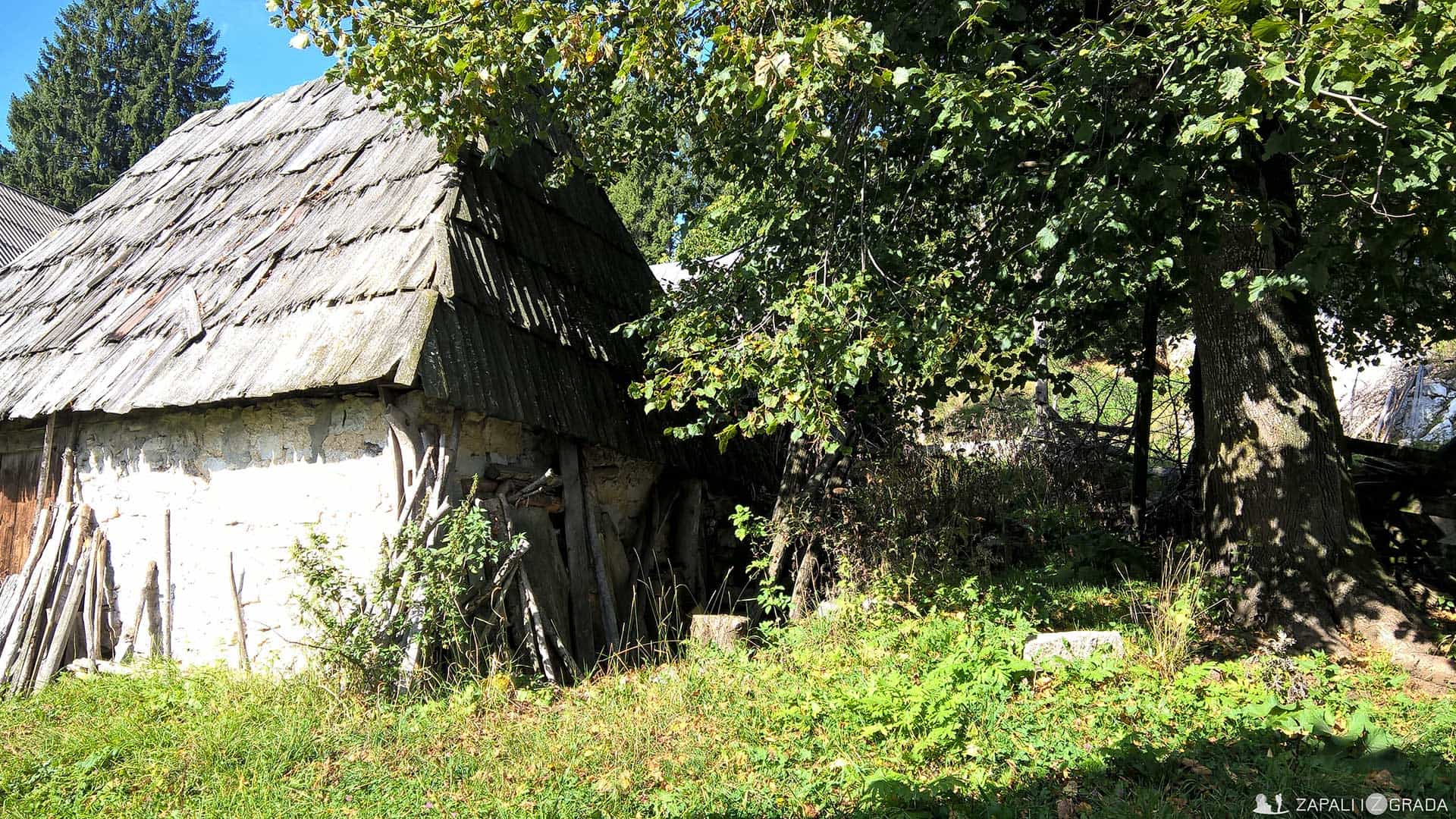 You will immediately realize that you’d landed on an unreal place. The fact that you are at over 1400 meters above sea level, with a view of half of Serbia and Montenegro, and brisk mountain air create euphoria, but also an excellent basis for the absorption of local stories, legends and mysteries. According to the tradition, people from this area are bright and capable, and there were no doctors among them. The story says that they only die of old age. So this is the homeland of many centenarians. Some of them don’t know their year of birth. It used to be linked to severe winters or important battles. 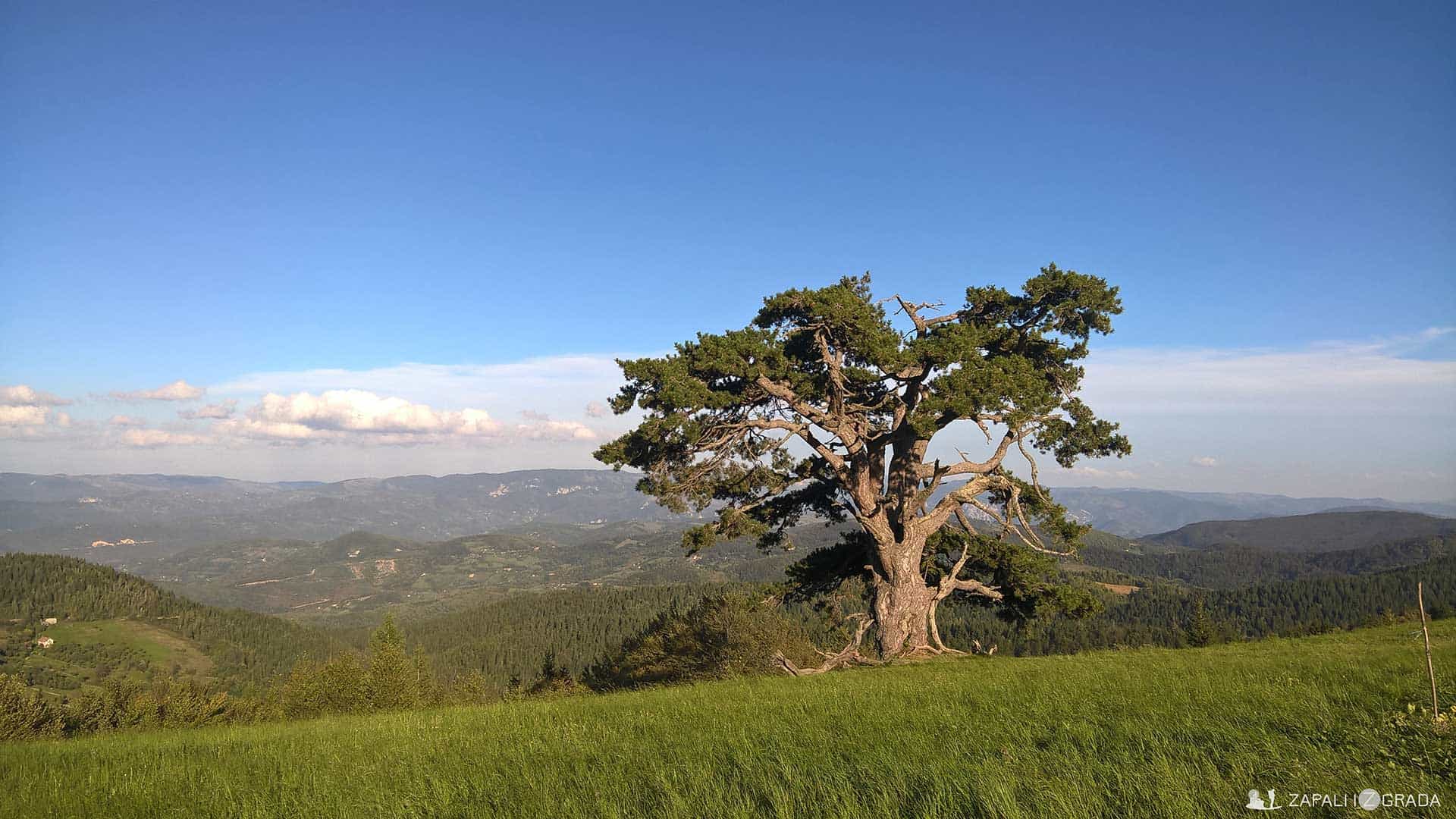 However, the oldest resident is not a man, but a remarkable tree. As a metaphor for longevity and Serbian defiance to all external influences, this region is dominated by a five centuries old pine. I get goosebumps when I think of what has passed in the meantime. Baroque and the renaissance, the steam engine and Hiroshima, the still novel Columbus’ discovery of America … The mighty pine tree is still there, unmoved by the lightning, flogging of winds and the human folly in numerous wars. I just hope that some of our quasi engineers don’t think of a highway that should pass just there. 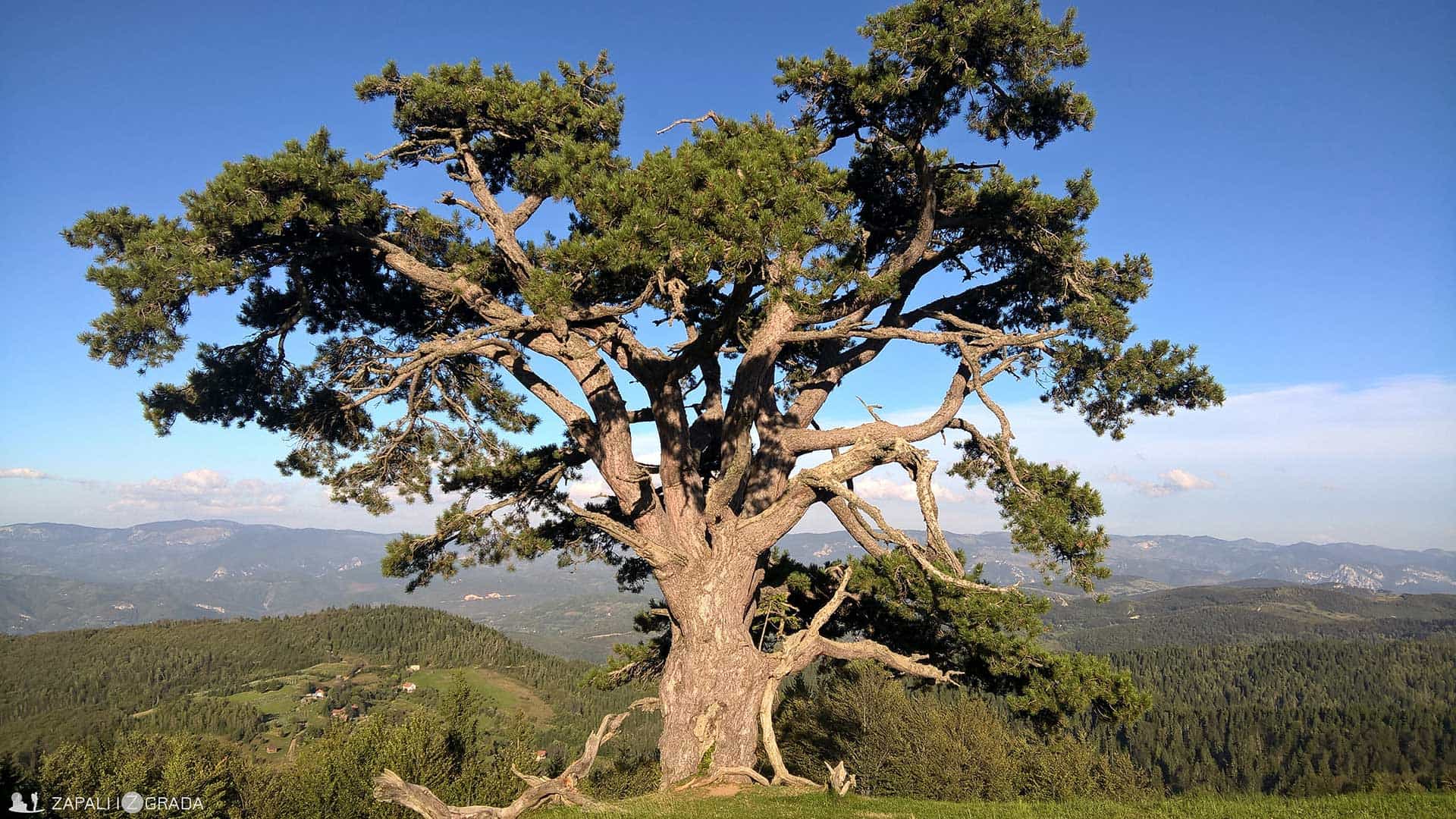 And it really is something special: 18 meters high, with a 13-meter wide crown and five-meter wide trunk. The numbers are impressive, but still more impressive is the energy radiating from the tree, as you watch the nearby mountains. Another proof of the otherworldly beauty of this pine is a spruce, which emerged from its branches. How a tree can grow from another, probably could not be explained by either Darwinians or the procreators. 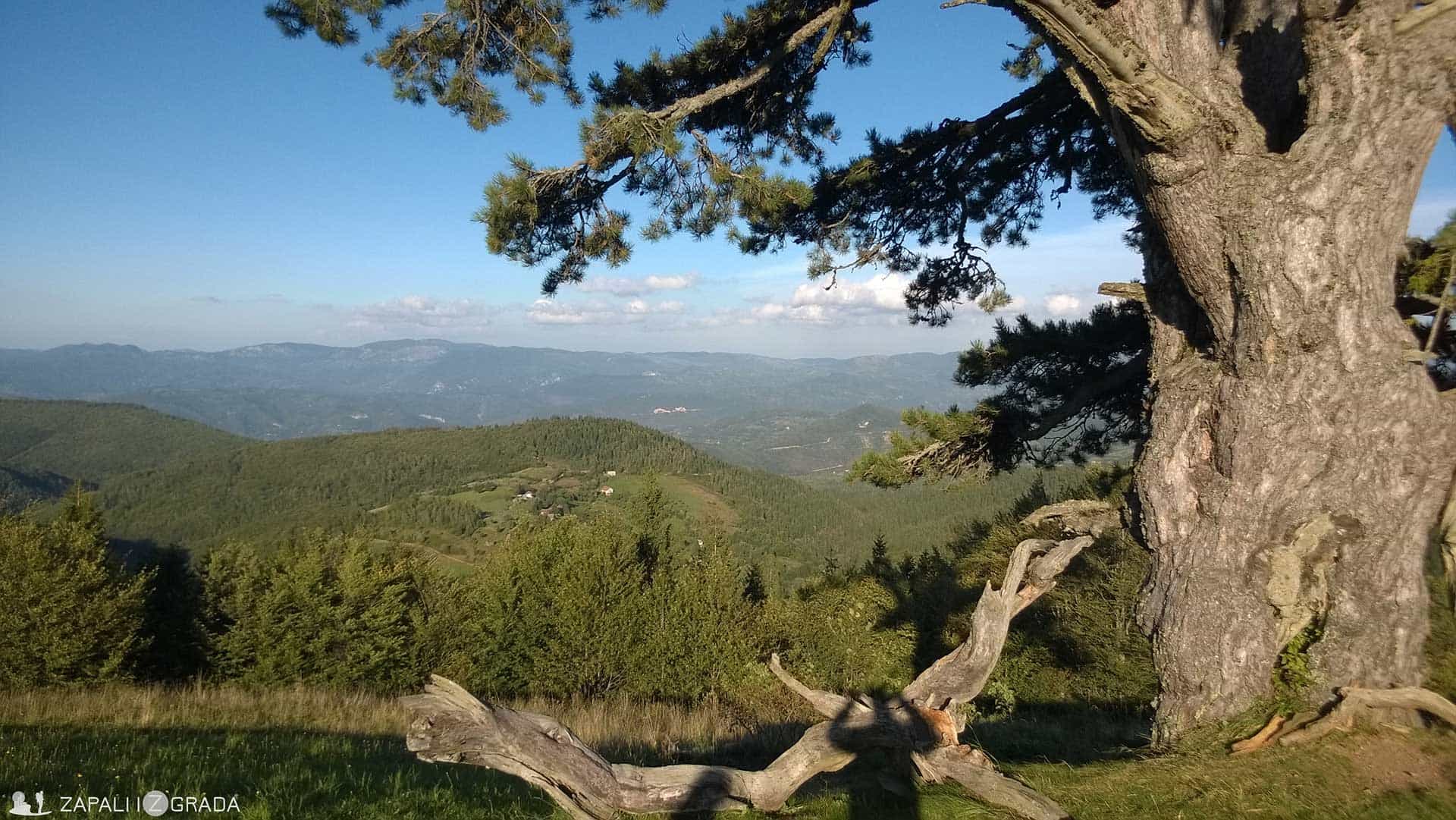 Since there was no church for a long time, the villagers used it for centuries for religious ceremonies, so it was named Svetibor (sacred pine). Numerous stories and legends which are deeply engraved in the DNA of the highlanders probably came to life at various local gatherings. Even today, villagers get sparkles in their eyes when they say that nothing can be taken from the tree, and in particular that it is forbidden to burn branches and pinecones, unless you want heavenly wrath to come upon you. One legend is especially interesting.

Many, many winters ago, all the villagers left their homes, and the reason for such a drastic move was written on a scroll and put inside Svetibor. Some even say that inside the tree there are records related to the migration of the tribe, of its origin and similar information, vital to the Serbian people. As a true protector, the pine enclosed the scroll in resin and hid it in its womb.

Visitors of Kamena Gora are mainly athletes, adventurers, or those needing a break from the fast urban life. The offer of sports and activities is so great that it would be possible to organize a relaxed outdoor Olympics – including mountain biking, rock climbing, hunting, fishing, paragliding, hiking, rafting. No wonder that Kamena Gora holds a special place in the hearts of nature and adrenaline lovers. 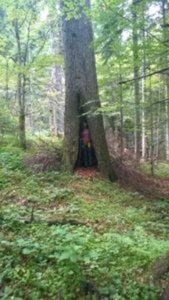 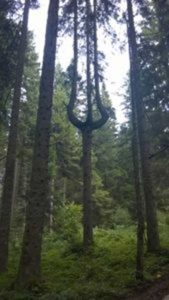 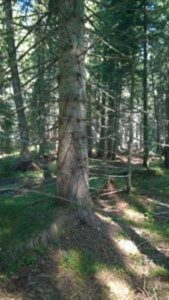 Why not, the nature here is extremely creative and talented. Deciduous and coniferous forests, glades, meadows, beautiful vista points, more than 100 springs, numerous pits and caves…

The surrounding area of Kamena Gora can boast with 80 kilometers of hiking trails, ideal for digital detoxification. Some of them lead to Crni Vrh and Katunište mountain tops, some to Jabuka Mountain, others to Kurt cave or many nearby creeks … 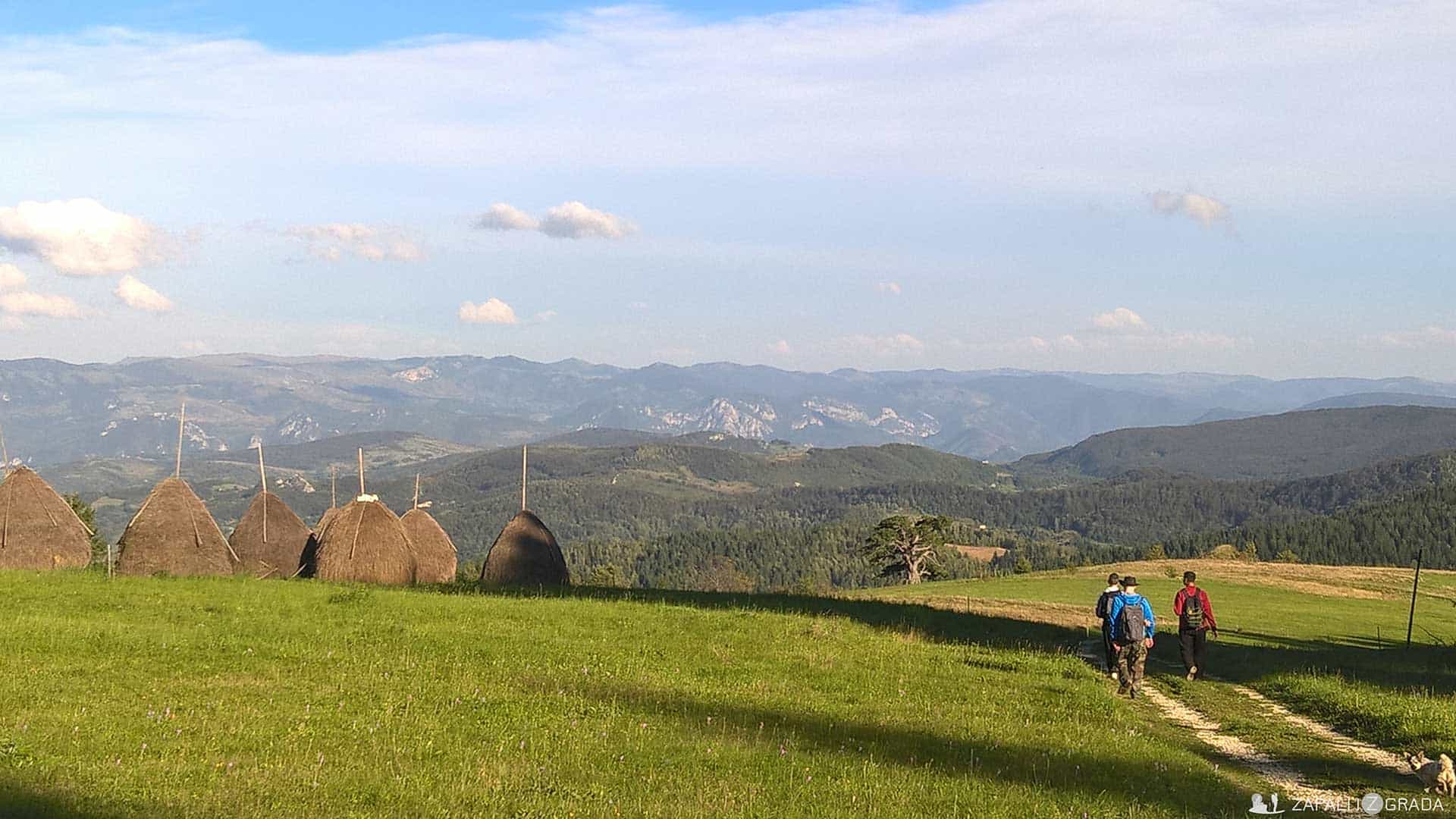 You should be aware that not all of them are marked, or at least not along the entire length. Some are not fully marked, and somewhere with the cutting of trees the markings got lost as well. So it is best to ask, if you are planning a longer tour. Don’t worry if you plan a stroll and some local research, you certainly won’t get lost. It just might happen that you will find yourself. 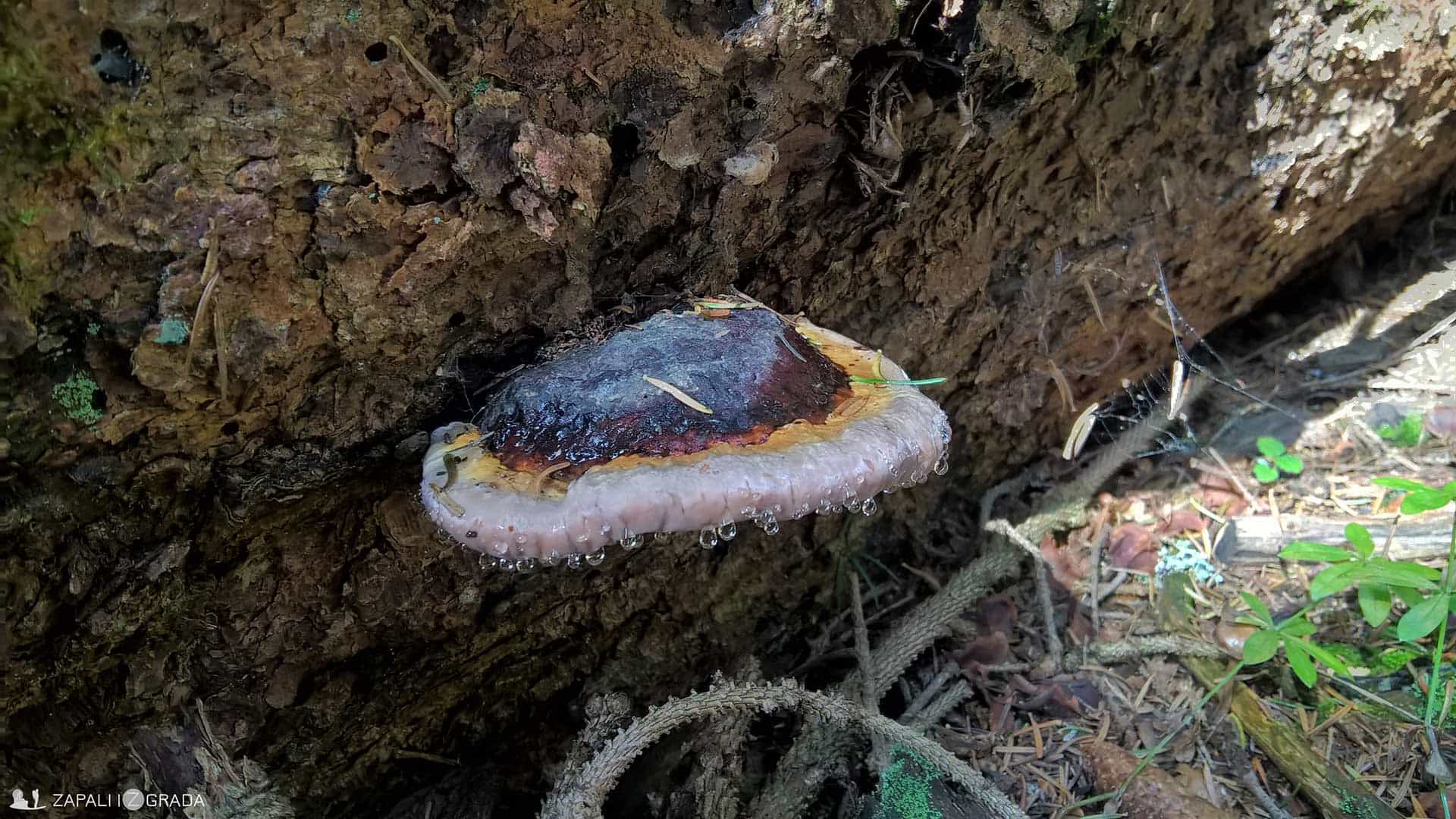 We opted for digital detoxification through hiking and “foresting” towards Jabuka. Greeted by an almost untouched nature, we were surrounded by evergreen forests and amazing mushrooms. Nowhere had I seen such a “range” and invasion of fungi. 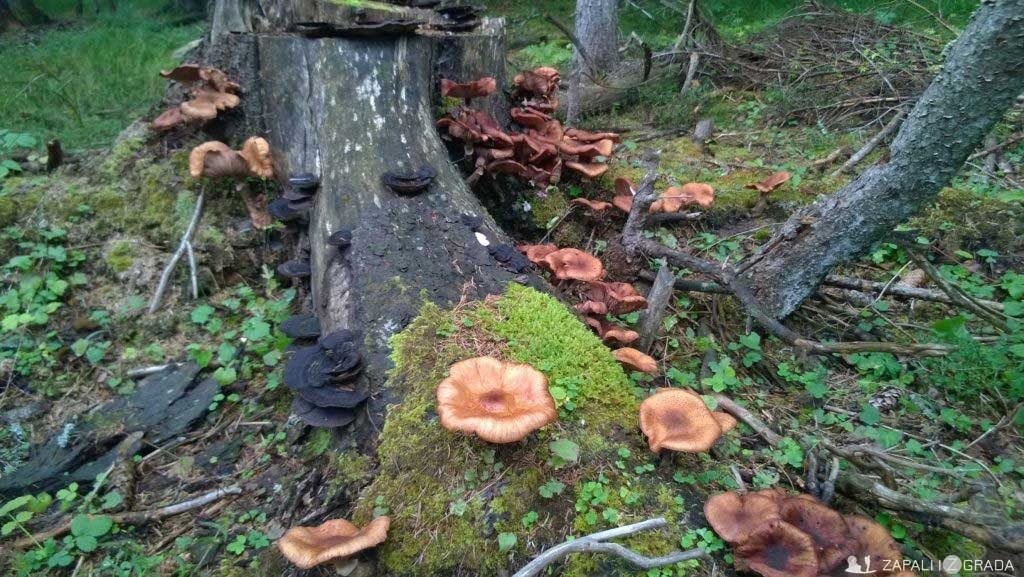 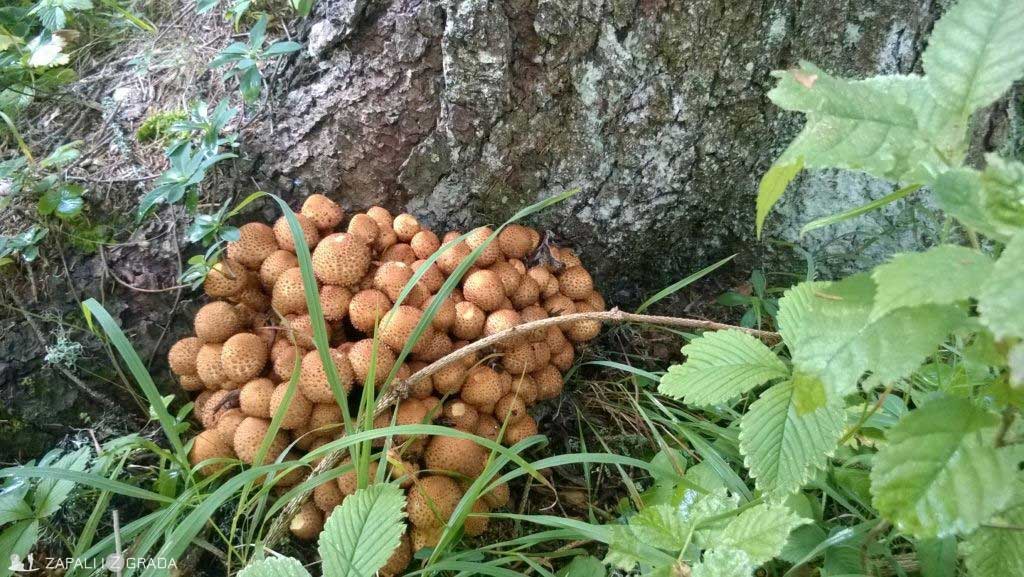 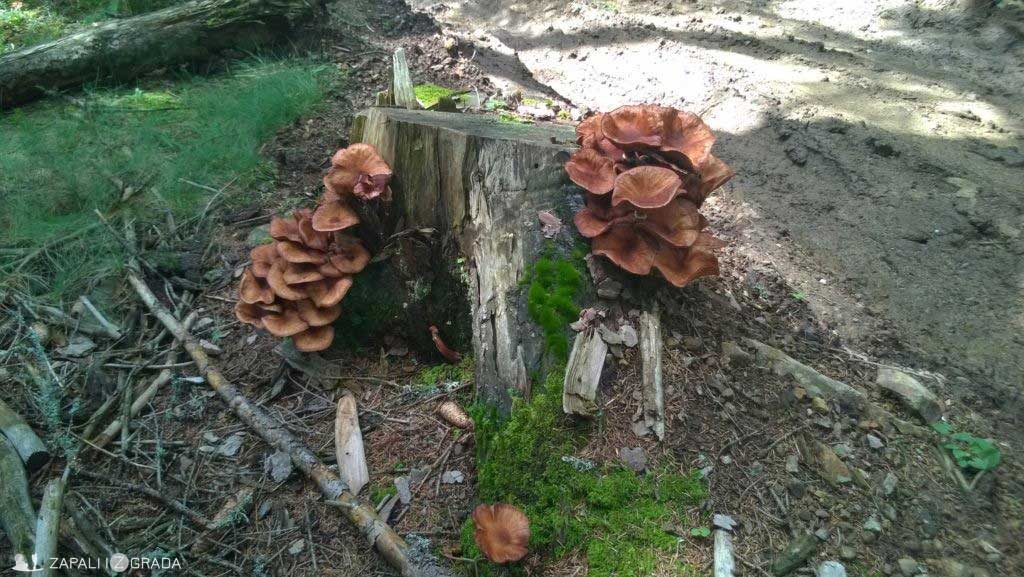 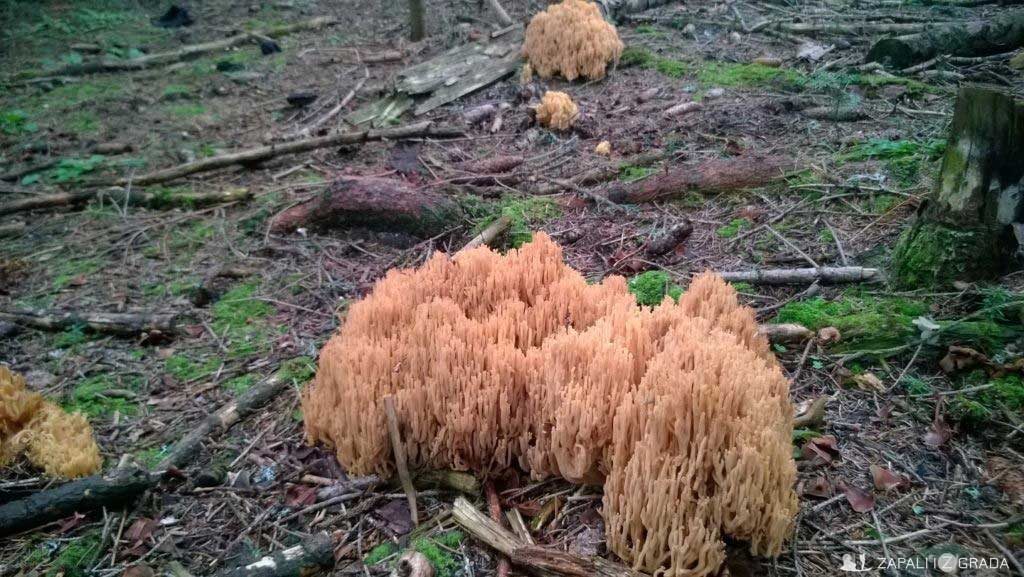 We did not make it to Jabuka because of the above-mentioned problems with the markings, but that did not spoil the enjoyment. 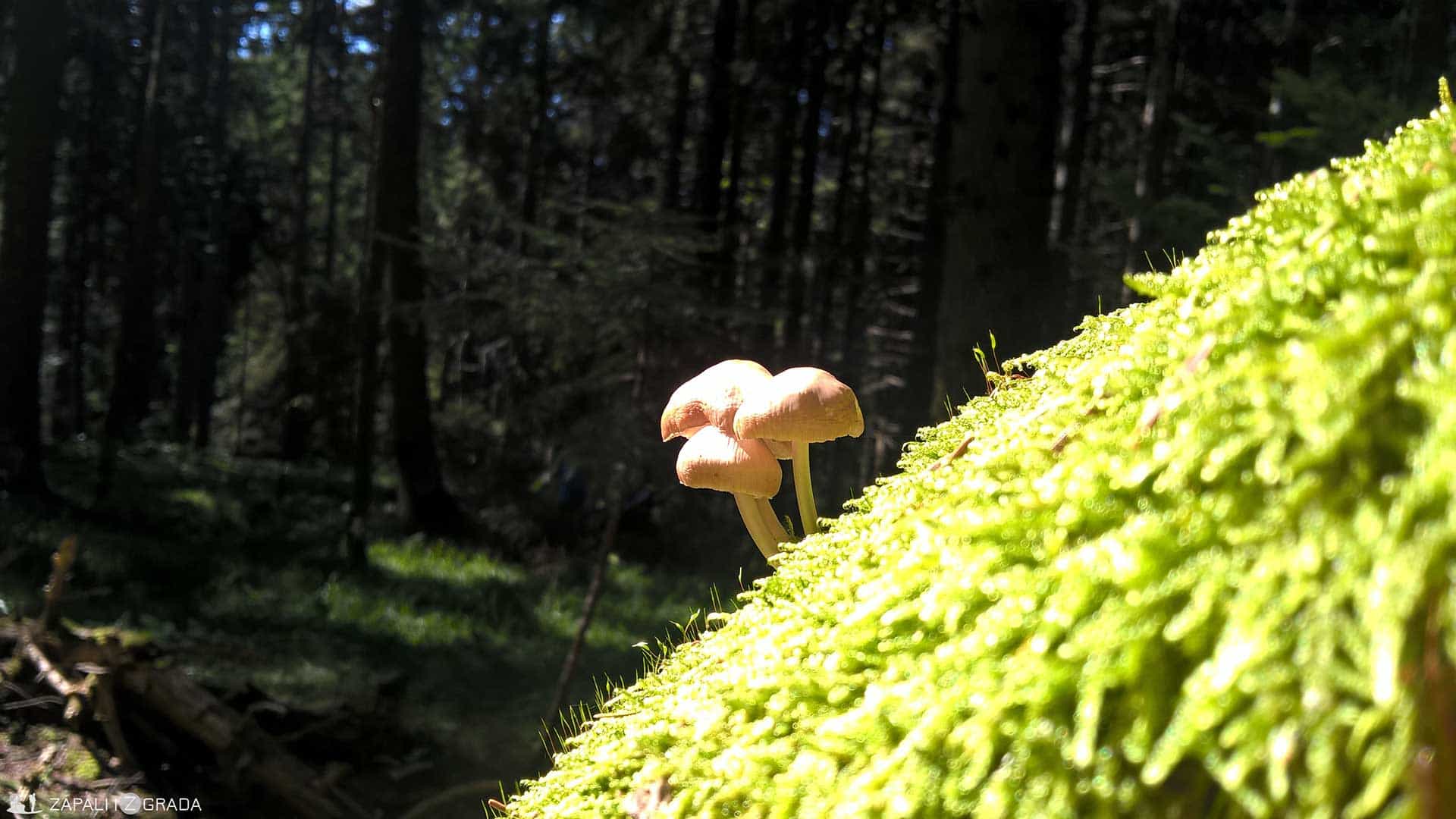 On the contrary, it allowed us more time to explore every corner of this magical forest. Spending time in the thick forest is a rare opportunity that works like a healing medicine, so it is no wonder that we were in a great mood. 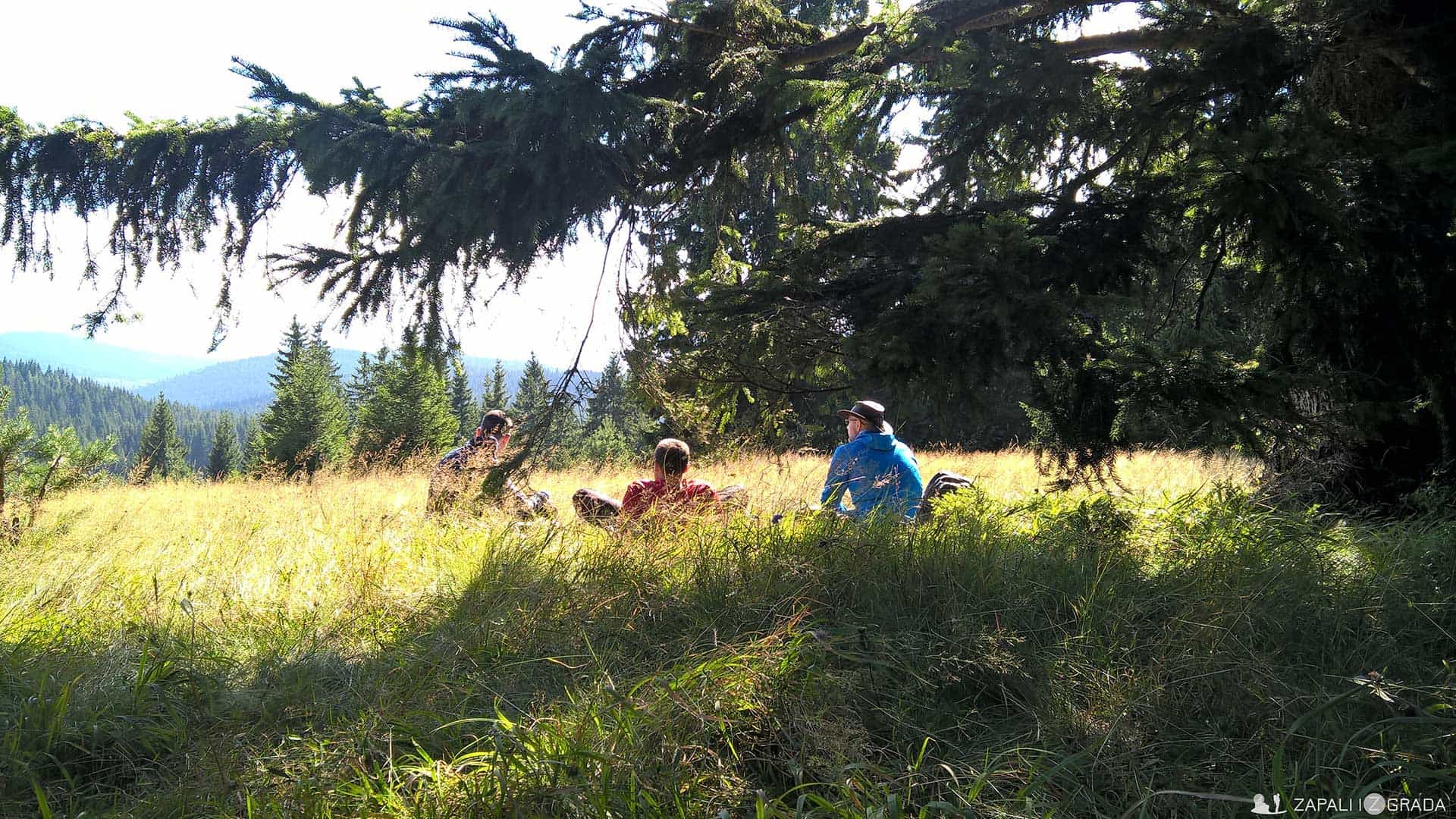 We totally let go and enjoyed the idyllic vantage points that provide you a feeling of Zen, while you have your eyes on the Durmitor, Jadovnik, Zlatar and Zlatibor mountains. 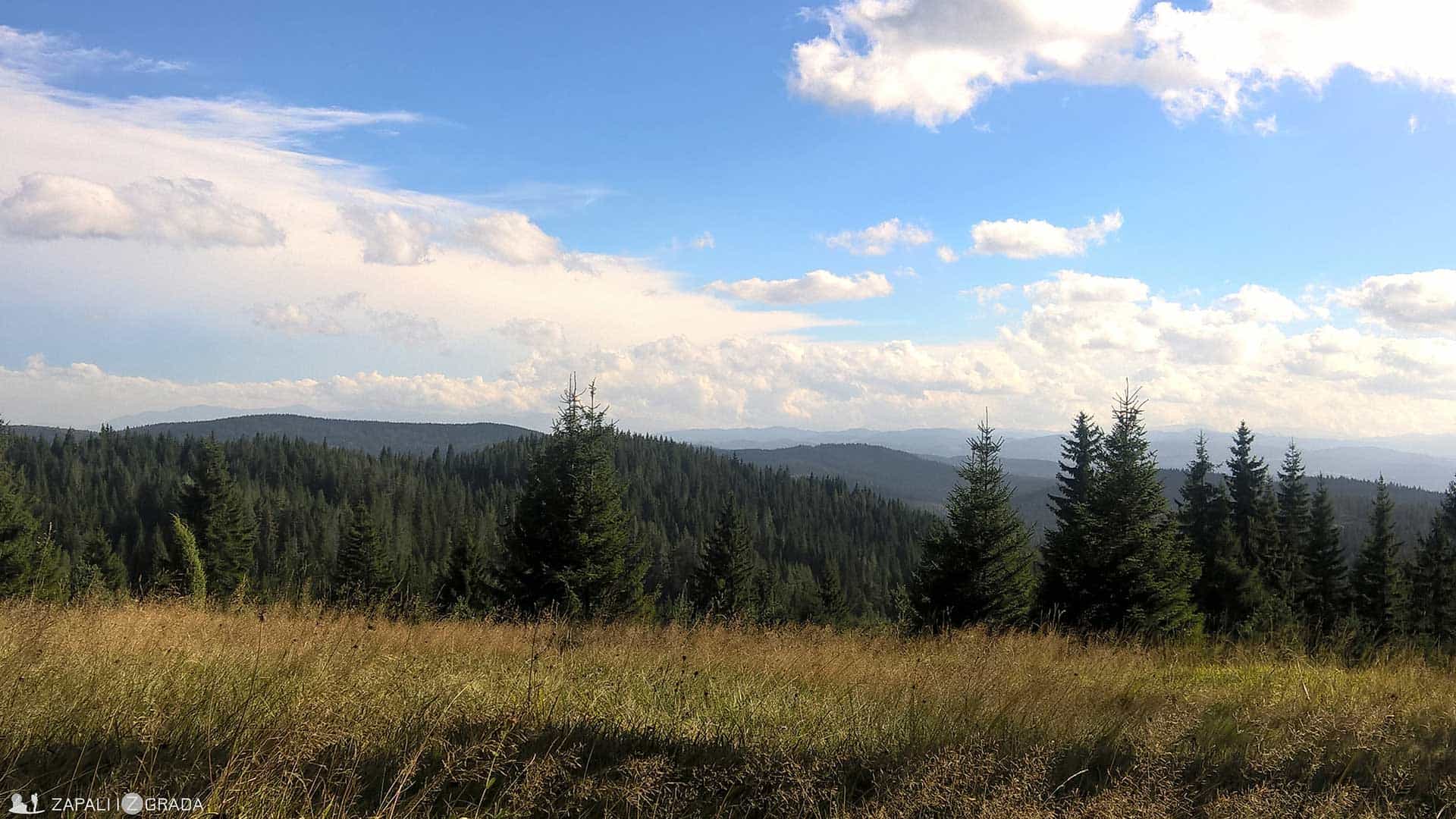 Physically tired and mentally consolidated we returned to the village and eagerly waited for a pre-agreed meal in a rural household. This is a story for itself. For 300 to 500 dinars per meal you can dissolve in top local culinary wonders. Maybe some are picky, but you really can’t have anything better than home-made cheese, eggs, donuts, tomatoes, broth, chicken, buckwheat pie … The special treat is a yogurt that speaks seven languages.

If you want to discover the extraordinary beauty of this area, follow the activities of hiking clubs. For many, Kamena Gora is part of regular calendar, and I know for sure that this tour is organized by Pobeda, Železničar, KAUP. Or simply gather your family and/or friends and treat yourselves with an unforgettable weekend.