I have never been to Kosovo before and I’ve always felt somehow embarrassed about it. We are all beating our chests about not giving Kosovo away, because this is where our holy sites and ancestors are, but in reality little is done about the topic. In most parts of Serbia, Kosovo is mentioned only before the elections and can still be heard from hooligans during matches: “KO-SO-VO is the heart of Serbia”. The least I could do was to visit Kosovo and write a blog about it.

To be honest, it’s not that easy to go. Media pressure is huge and constantly filling our heads with half-information and misinformation. It was not an easy decision to take this trip with Belgrade car plates and a pregnant wife. But after spending a weekend there, I can only say that I felt more secure than in some parts of Belgrade. 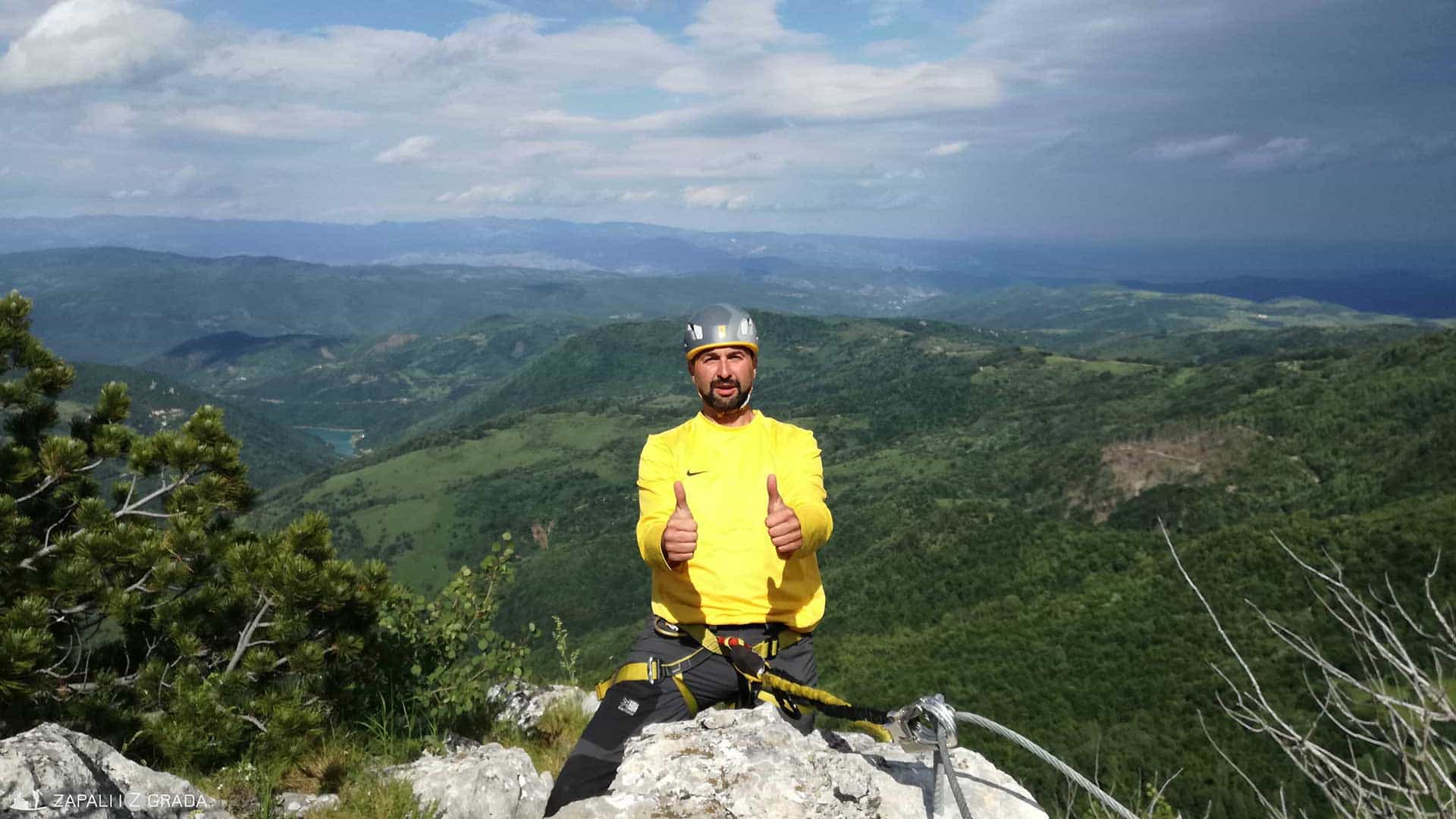 The target destination was Mokra Gora and the road to it leads via Ibarska motorway through Kraljevo and Novi Pazar. It’s about a five hours’ drive. Once in this part of the country, it would be a sin not to visit the Monastery of Crna Reka. The Serbian Ostrog, as it is called by natives, is accompanied by many intriguing stories. It was built next to a river, deep into a big rock in the 14th century. It is believed that it is the only monastery on the territory of Serbia that was not demolished in numerous wars and is linked to a drug treatment program. Besides drug addicts seeking to be cured, others come for help from all over the world, as it is believed that the relics of St. Peter of Korish and the water that springs from the cave are miraculous.

The legend says that, after the Battle of Kosovo, St. John Devish came to this anchorite to pray, but his prayer could not be heard, due to the hook of the mountain river. Angered by this, he shouted “Shut up black river!” And ever since, only in that part, the river goes subterranean and the monastery that was later built on top of it was named Black River. 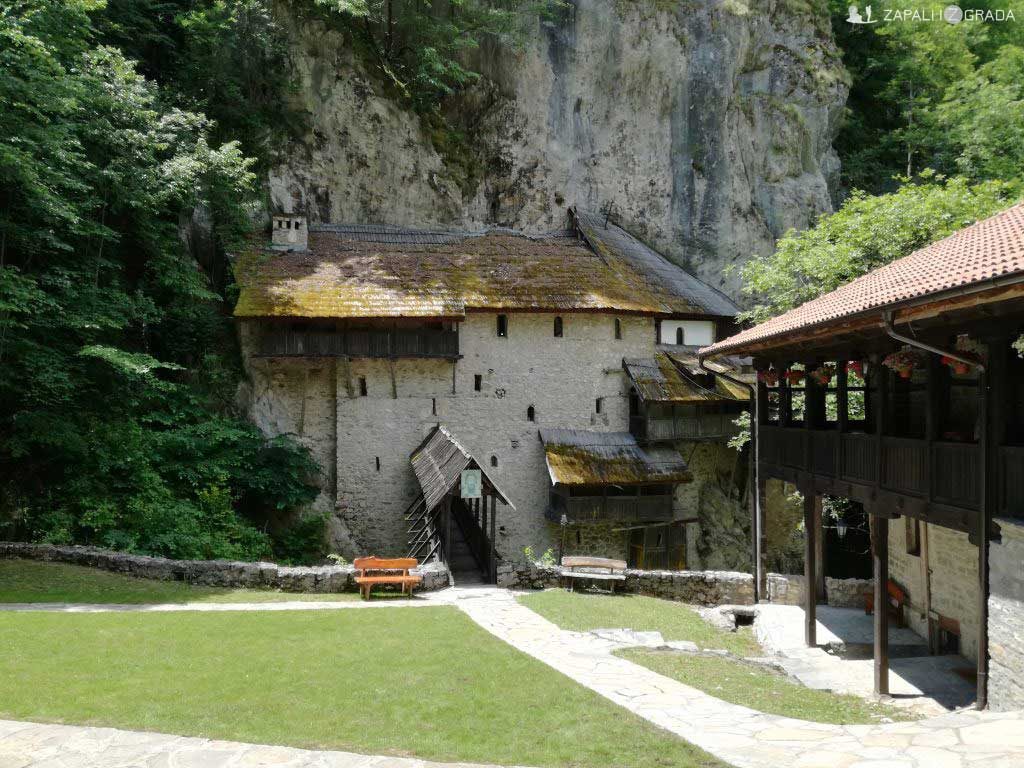 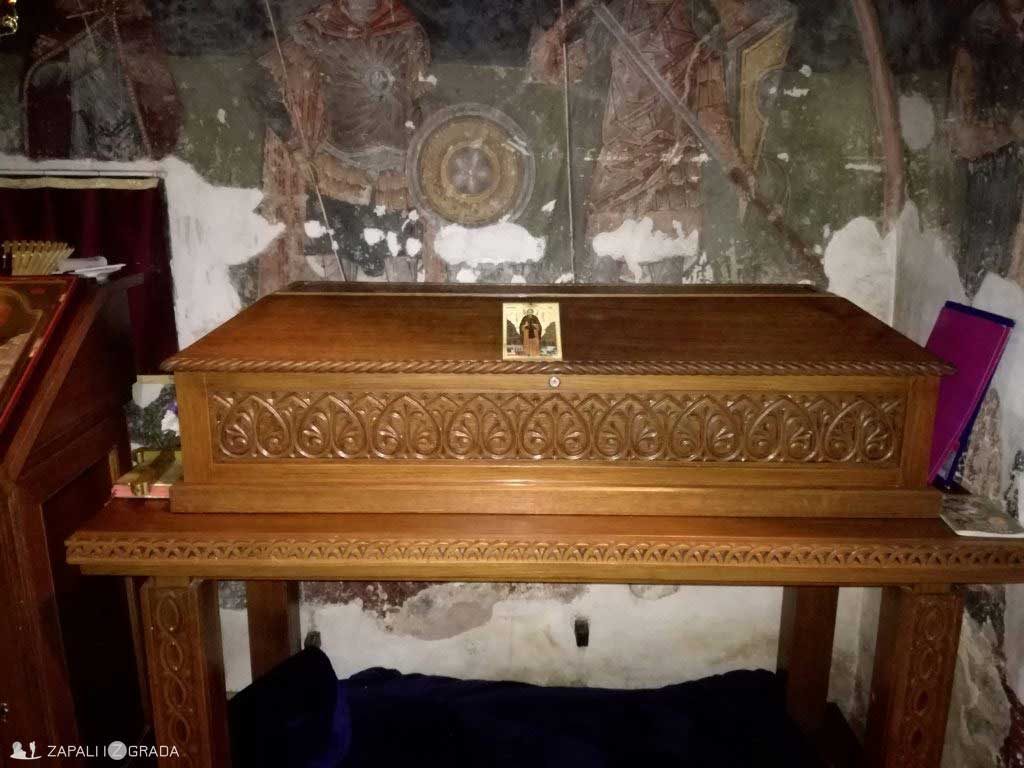 Mokra Gora (Wet Mountain) belongs to the mountain range of Prokletije and is justly named “wet”. Its uninhibited and wide plateau is abundant with lakes, drinking water sources and dense forests that do not allow too much sun to reach the ground. Under such conditions, only the strongest survive. This applies to flora and fauna, but especially to people. 😉 This almost untouched nature is home to a large number of endemic and common plants, but also to animals that we encounter only in zoos or stories. And here I also noticed a devastating reverse proportion: the fewer the people, the richer the wildlife. 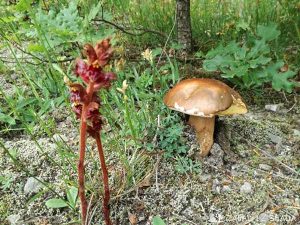 From whichever side you approach the mountain, there is a possibility of encountering pine, Serbian spruce, plain spruce, saffron, blueberries, fungus of the species boletus and chanterelle, but also foxes, roe deer, wild boar, rabbit, wild cat, wolf or bear. The Beauty of the Balkans, as it was called by Jovan Cvijić, is proudly ripping the sky with its 2,000 meter peaks, 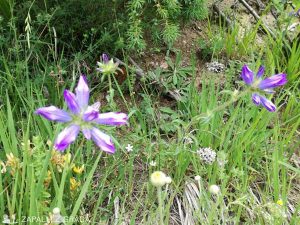 however, not all of them on our territory. Honestly, I am getting more and more puzzled about what our territory is.

Negative news that have been blowing from Kosovo for years have created some kind of ignorance among Serbian citizens, and all of these beauties and benefits have remained unrecognized. The initiative Outdoor In, which has been engaged in the promotion and development of tourism for many years, with the help of foreign funds (is there any other way?), made sure that this rich area is not completely missing from tourist maps. The love for their homeland, enthusiasm, creativity and dedication resulted in an offer that any well-developed centre in the Alps would be proud of. Anyone who overcomes prejudice and unjustified fears will be able to enjoy over 100 kilometres of hiking trails, cycling, paragliding, fishing, swimming in this paradise. They are especially proud of the via ferrata on the walls of Berim, which is by its size and complexity unique in the Balkans. 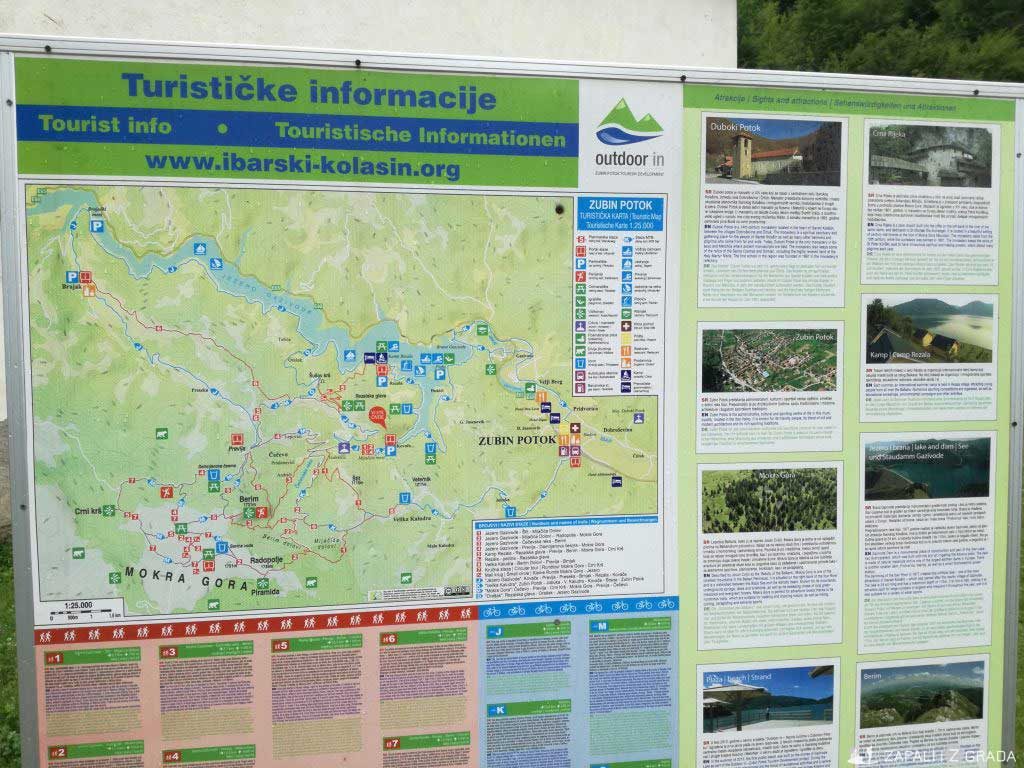 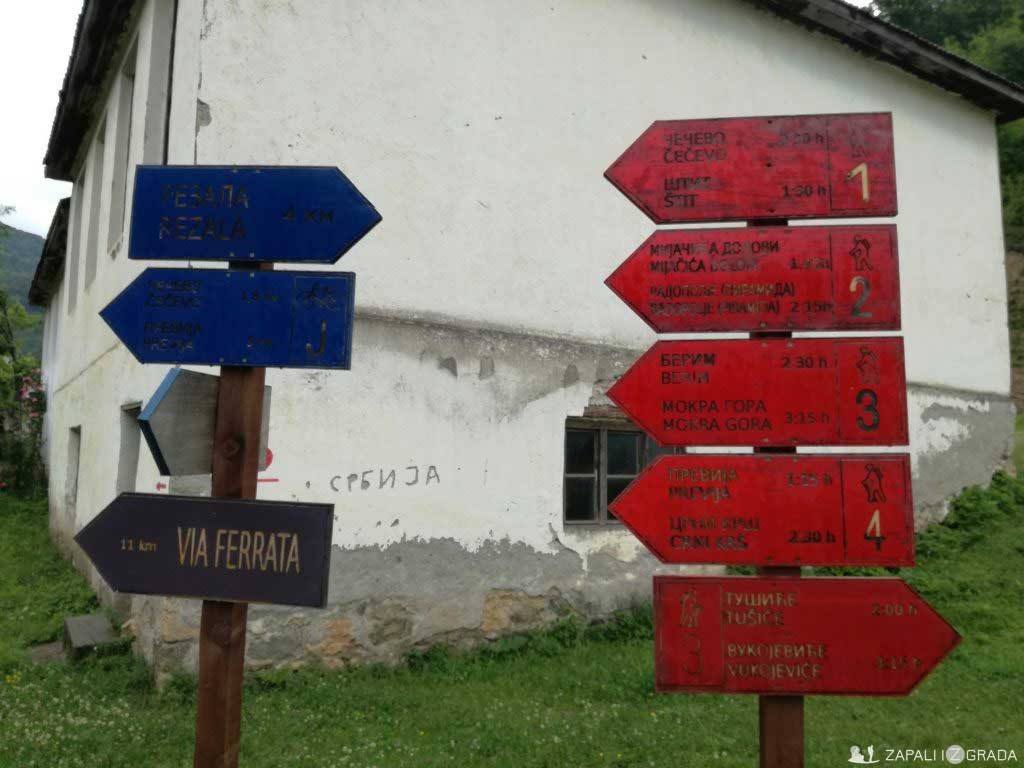 In Zubin Potok there are several hotels and houses where you can find accommodation. But I think there is a better way to organize. For a complete experience of the site, of getting to know the people and local habits, I strongly recommend Camp Rezala on the shores of Lake Gazivode. The camp is coordinated by two real champs, Ricko and Željko. Cheerful, approachable, witty. In addition to being part of the organization and providing you with all the necessary information, they will do everything to make you feel comfortable. 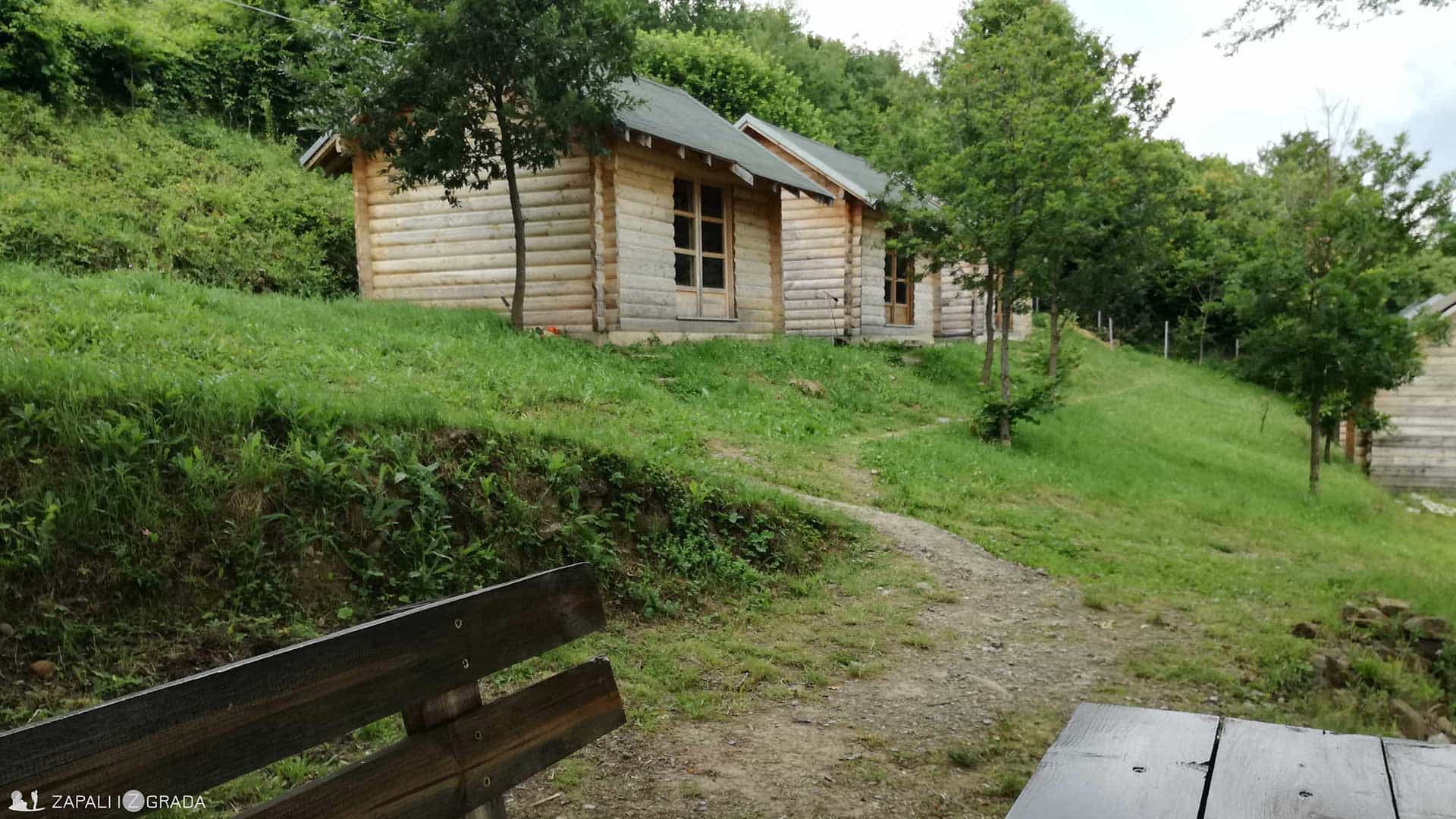 I felt like a cousin whom they had not seen for a long time – until I was to pay for the stay. It’s a joke of course; prices are more than convenient. Sleepover is 500 dinars, breakfast 150-200, lunch 400, beer 100 dinars. The camp has 20 beds, a shared shower and toilet and a big bar. From the terrace there is a view of the lake, where in the rarely beautiful water of the Ibar you can see the reflections of the sky and the mountains. That is why it is not surprising that hikers, fishermen and other explorers gather here to recount their adventures in a hedonistic atmosphere. 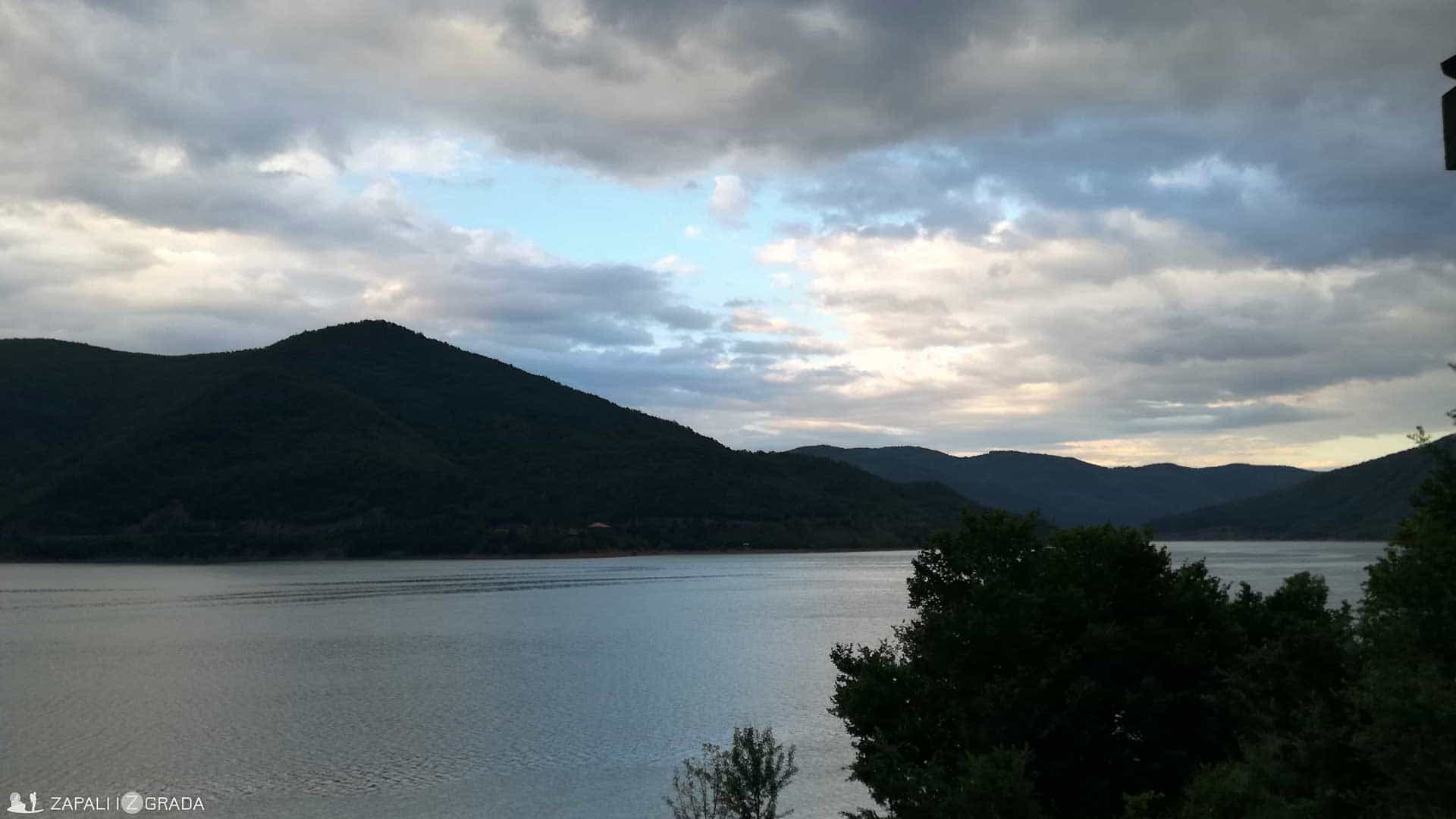 The term “via ferrata” is of Italian origin and means “Iron Road”. It is a path through an inaccessible terrain that becomes “passable” by placing metal bars and treads, additionally secured with a steel wire rope. Through the via ferrata, it is possible to move vertically and horizontally following the irregularities of the terrain and/or the rocks. There are several internationally recognized scales for difficulty assessment and according to each of them, via ferrata Berim belongs to medium-heavy. 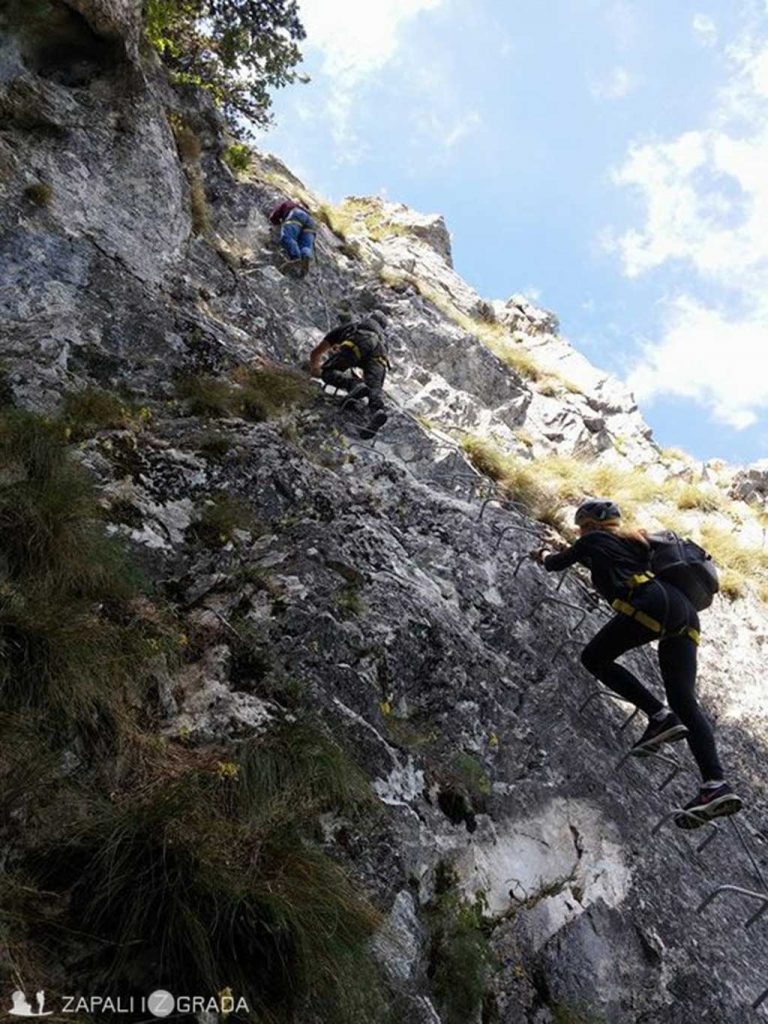 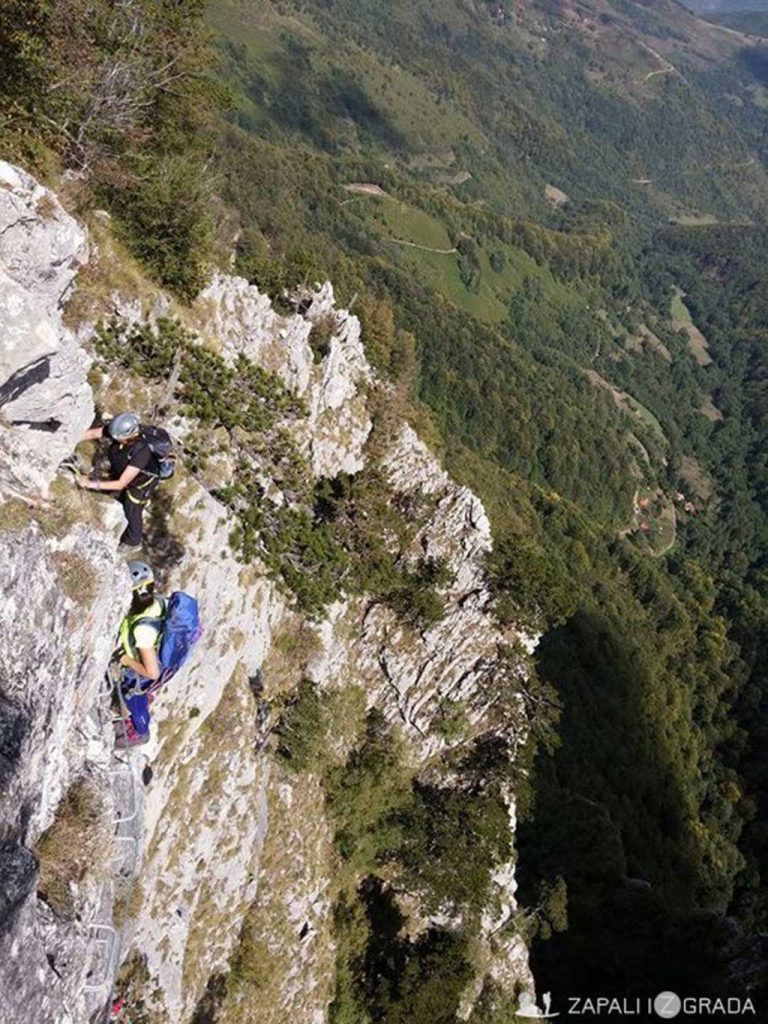 This interesting activity belongs to extreme ones, and to increase safety you need to use alpinist equipment. As a rule, extreme sports and specialist equipment are served with a high dose of adrenaline and boiling blood. Participants must be mentally and physically well-prepared. To those of you who watch nature mostly on screen, I advise to activate a bit before trying to conquer the challenging Berim rock.

The action starts with borrowing equipment made of a helmet, gloves, belt and via ferrata set – two braces with karabiners and a shock – absorber. After the initial briefing and a mini ferrate, which serves to demonstrate the technique and break the initial nervousness, I adopted two things. That’s what I also advise to you: the helmet must stay on the head at all times and the belts should always be tightened! 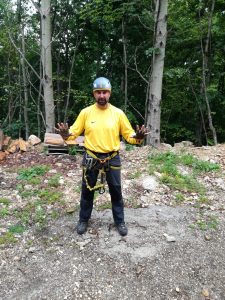 Encouraged with this new knowledge, I started to master the first stage. However, I quickly realized, as I was tied up to the wall, that everything I read and saw during preparation was not enough to introduce me to the experience. The feeling is absolutely unique. You are glued to the wall and you feel that instead of blood, adrenaline flows through your veins. You sweat. Not so much because of the effort, but because of the thoughts that pass through your head as you cling to the metal caskets, as if they were the most precious thing in your life. 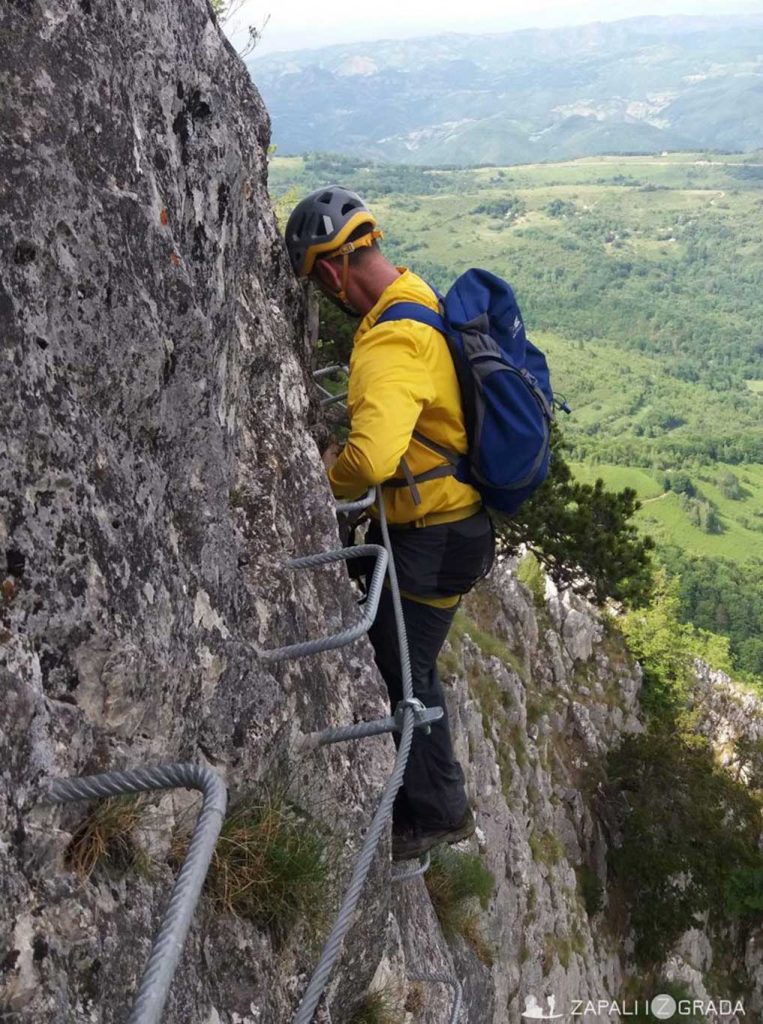 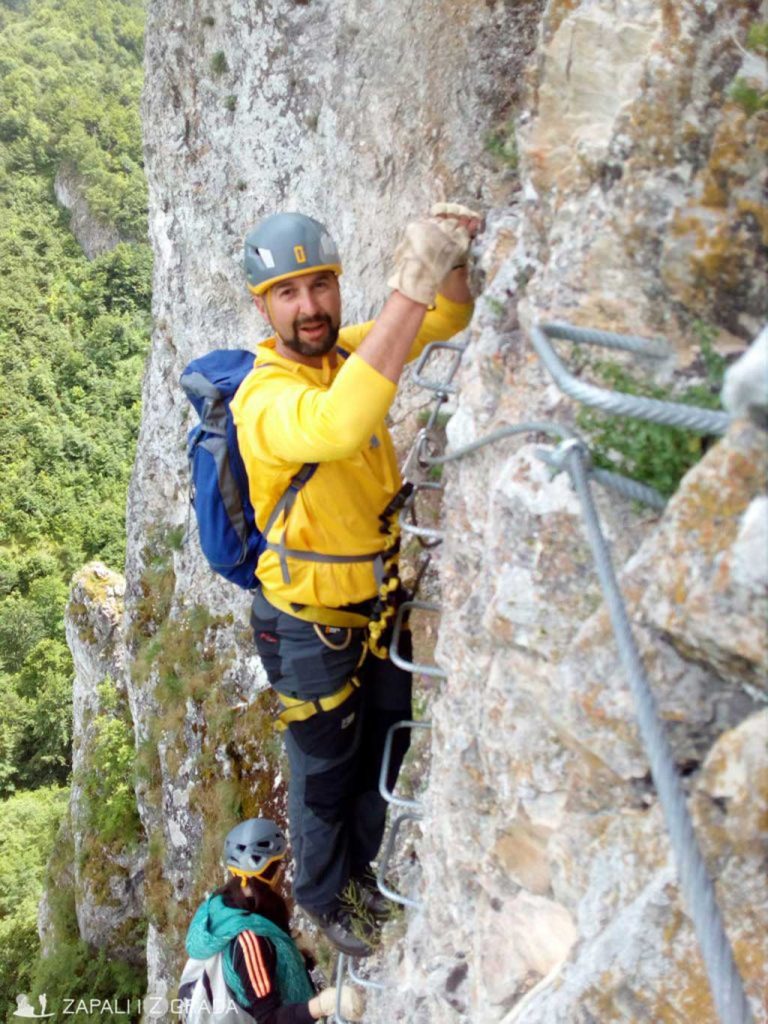 It’s all up to you. “What if the hands do not hold on?” – you’re overburdened with nervous thoughts. You must awaken the faith in yourself and encourage perseverance. You are the only one who can help you reach the end! But, all this in vain, if the brain does not process information. In vain, if fear has taken over reasoning.

This is the place where, if you are prone to that, you might withdraw. Still, the first part is the hardest, both psychologically and physically. In addition to your personal experience of the circumstances, there are two, three places where a bulging rock has to be overcome. 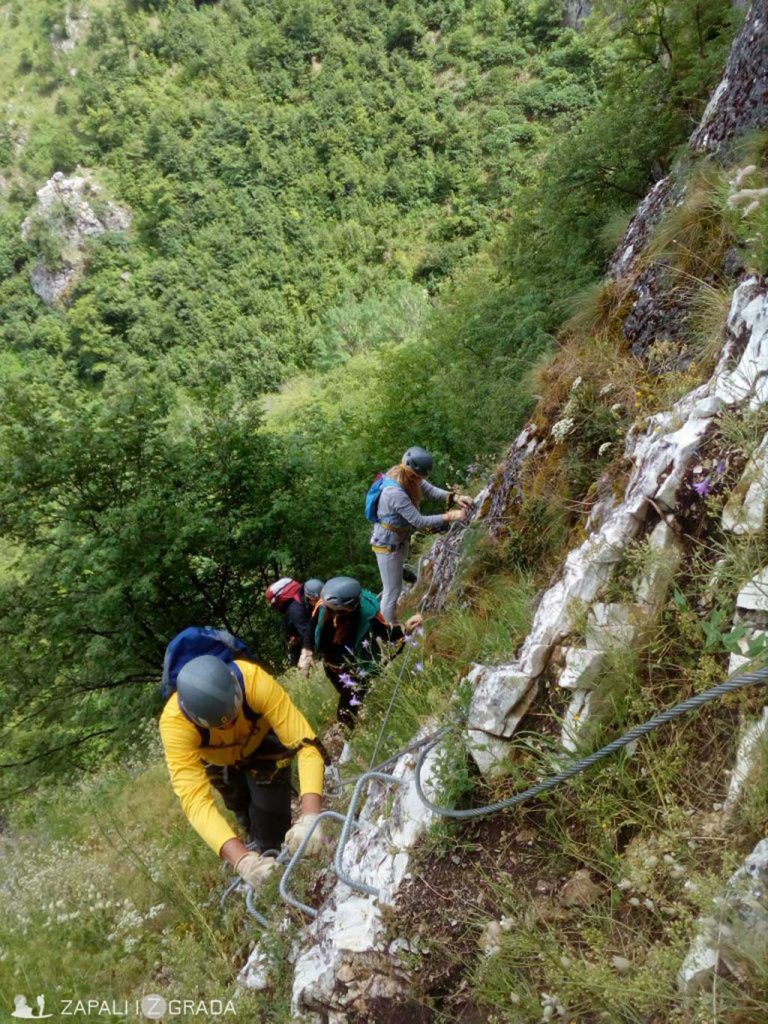 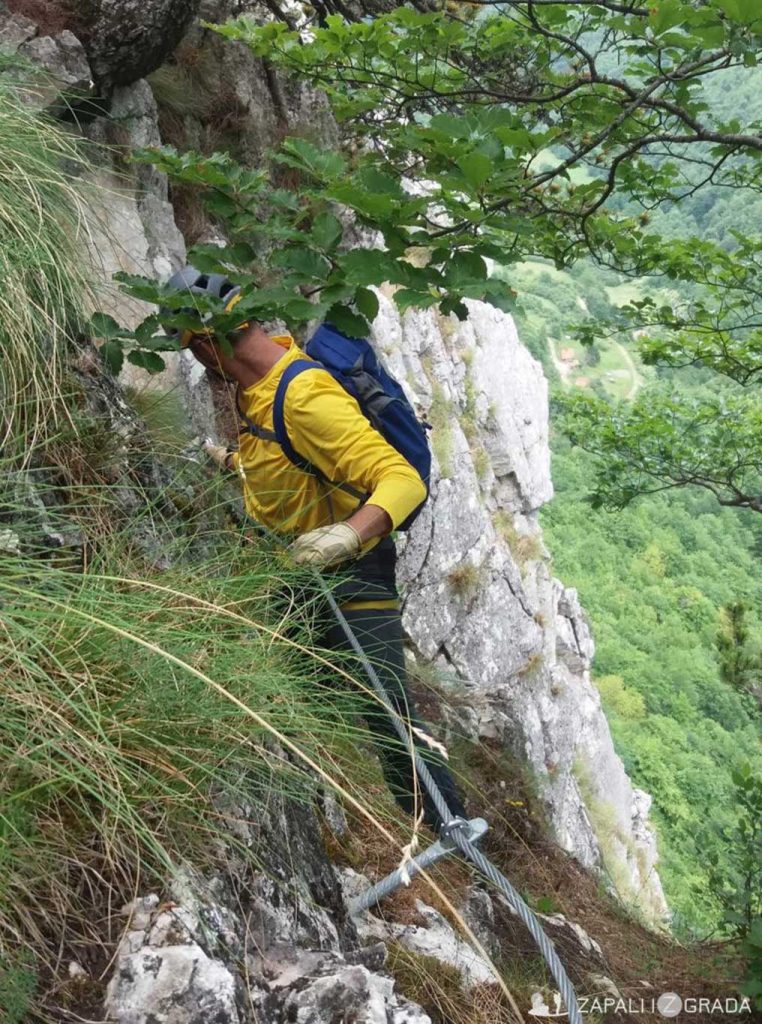 Luckily, I did not give up and I grabbed all 80 meters along the vertical wall to the first and only resting place. The break is in a cave and on a bench with a view as if from a tourist brochure. As you rest, looking at the distant horizon, you realize that you are going through a superb adventure, that you are in a place where only a few people went before you, in direct contact with raw nature. Even on the bench there is no real relaxation, the bonds are still on standby. 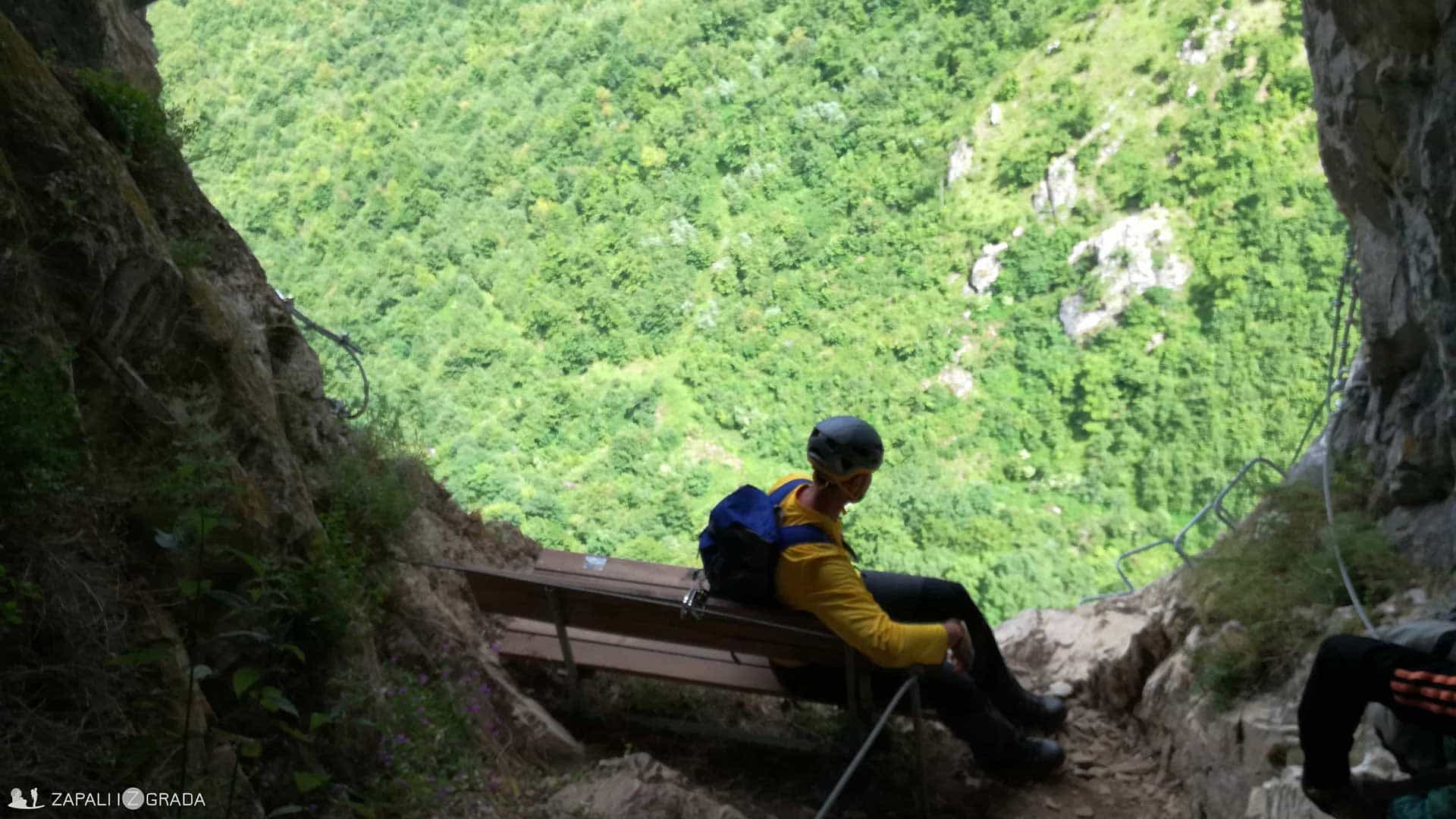 The trail continues through the cave, which gives the whole tour a speleological flavour, and to you a deep sense of exploration. The team was small but well chosen. We all had our first time, but for unexplained reasons we behaved as if we were experienced. 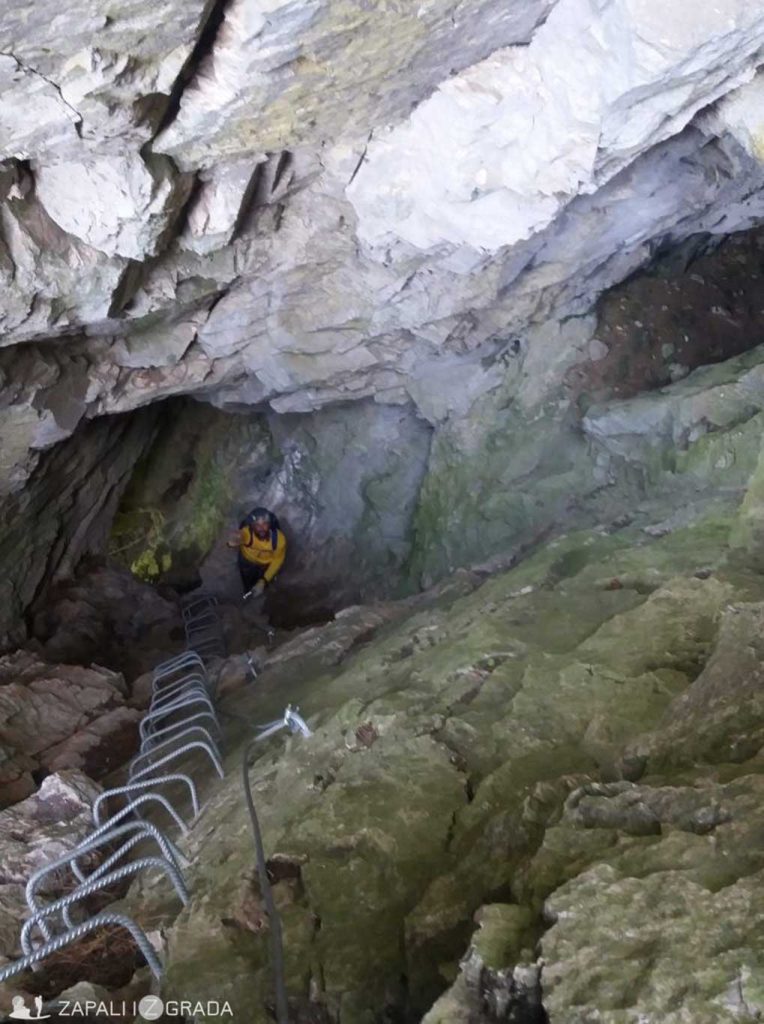 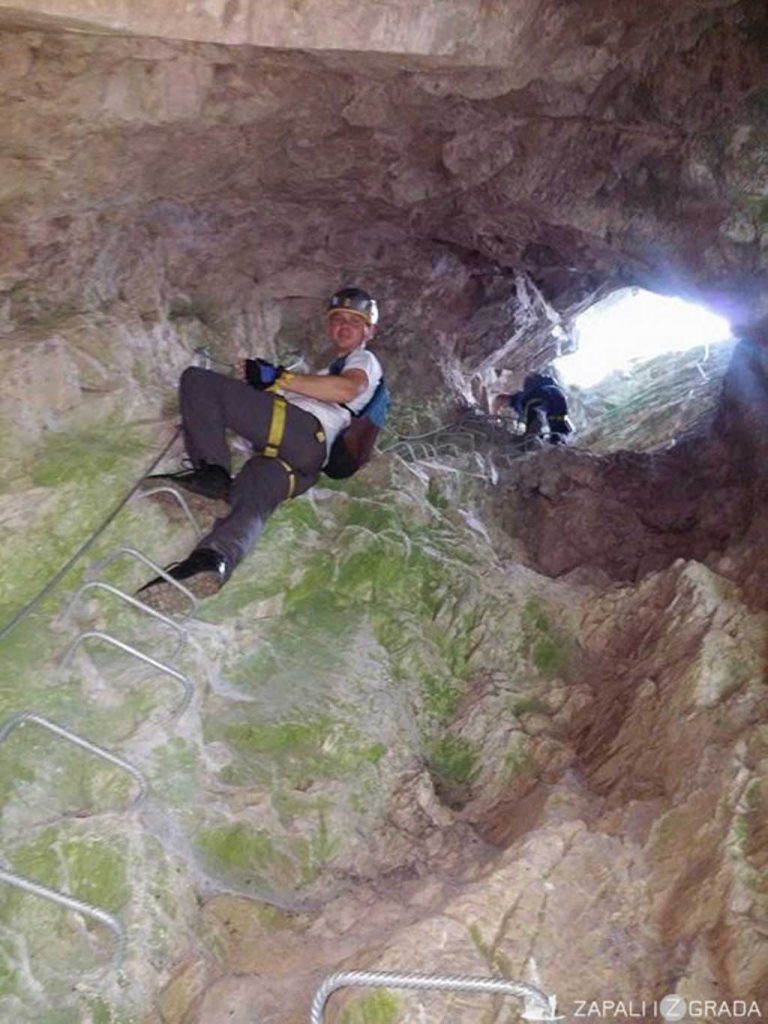 This was probably the contribution of the skilful conduct of our instructor Bane. Step by step, we are progressing, we overcome the rocks and obstacles, while the forest and objects below us are becoming just outlines or tiny replicas. Finally, we arrive at one unfortunate part, where it is necessary to overcome a wall with a vertical walk in the length of 15 meters. To hit the tread, you need to lower your gaze. This is the moment when you really have something to see, or rather, not see. Below you is a 300-meter abyss and only your skill and will power keep you away from it. 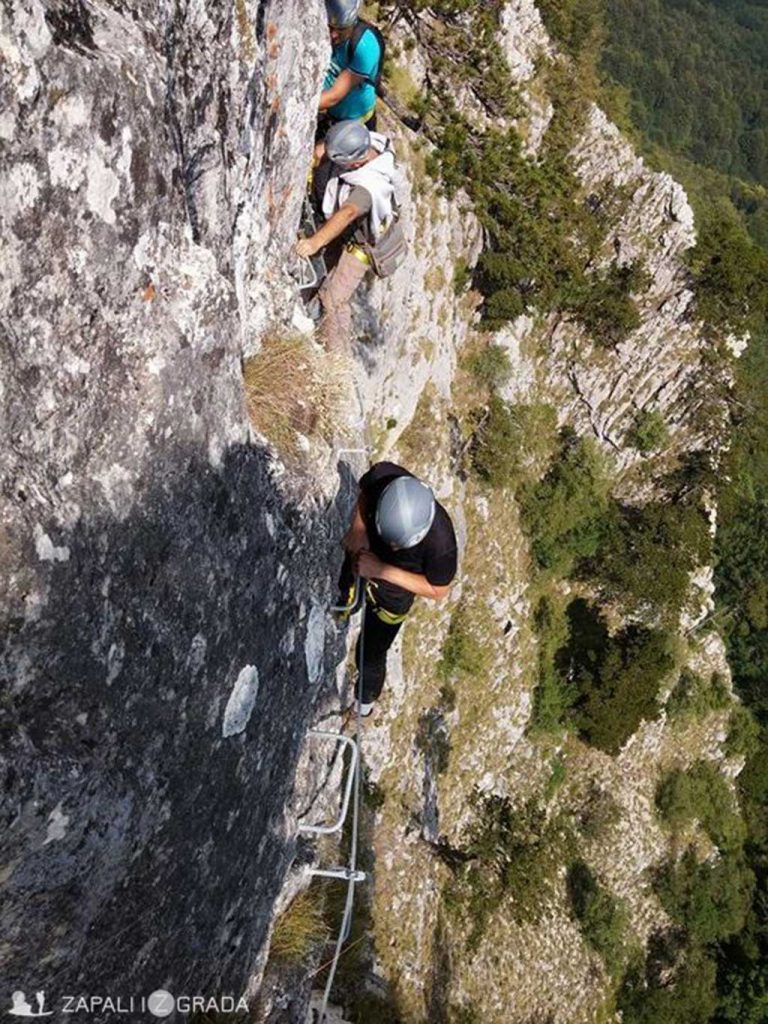 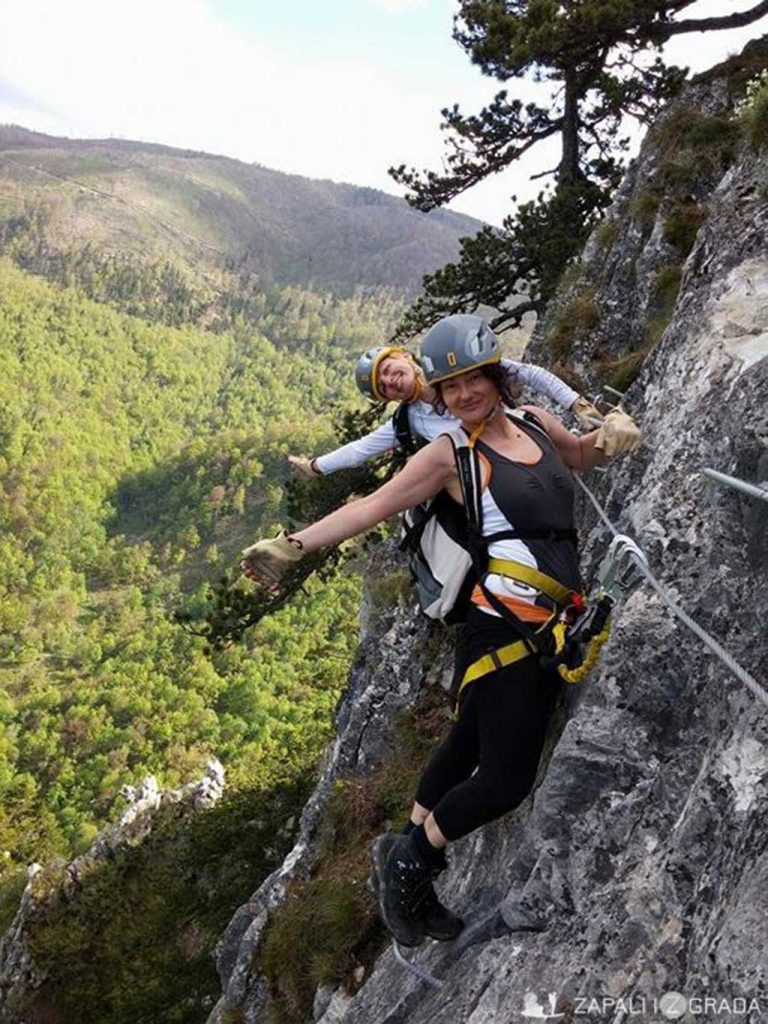 After the initial shock, you get the hold of it, “ignoring” what is below you and start really enjoying yourself, thinking you could climb indefinitely. Unfortunately, at this time via ferrata Berim is sealed at 300 meters of altitude. It takes 3-5 hours to climb, depending on the size of the group. This path is located at the top of the second rock of Berim, at 1520 meters above sea level. Chilling out and enjoying the view of Lake Gazivode, Kopaonik, Hajla, Prokletije and Rogozna is a true medicine for the soul and the body. 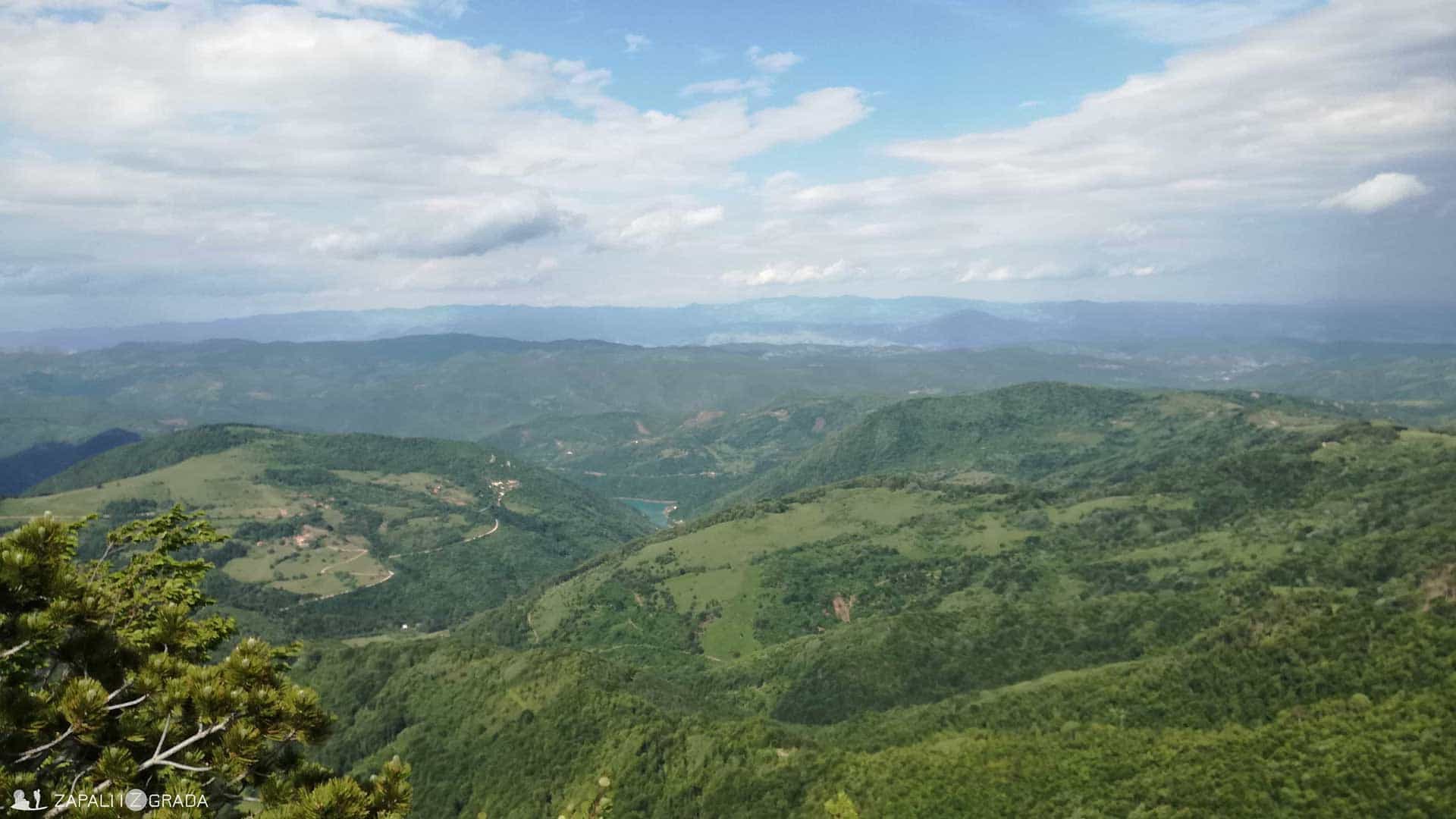 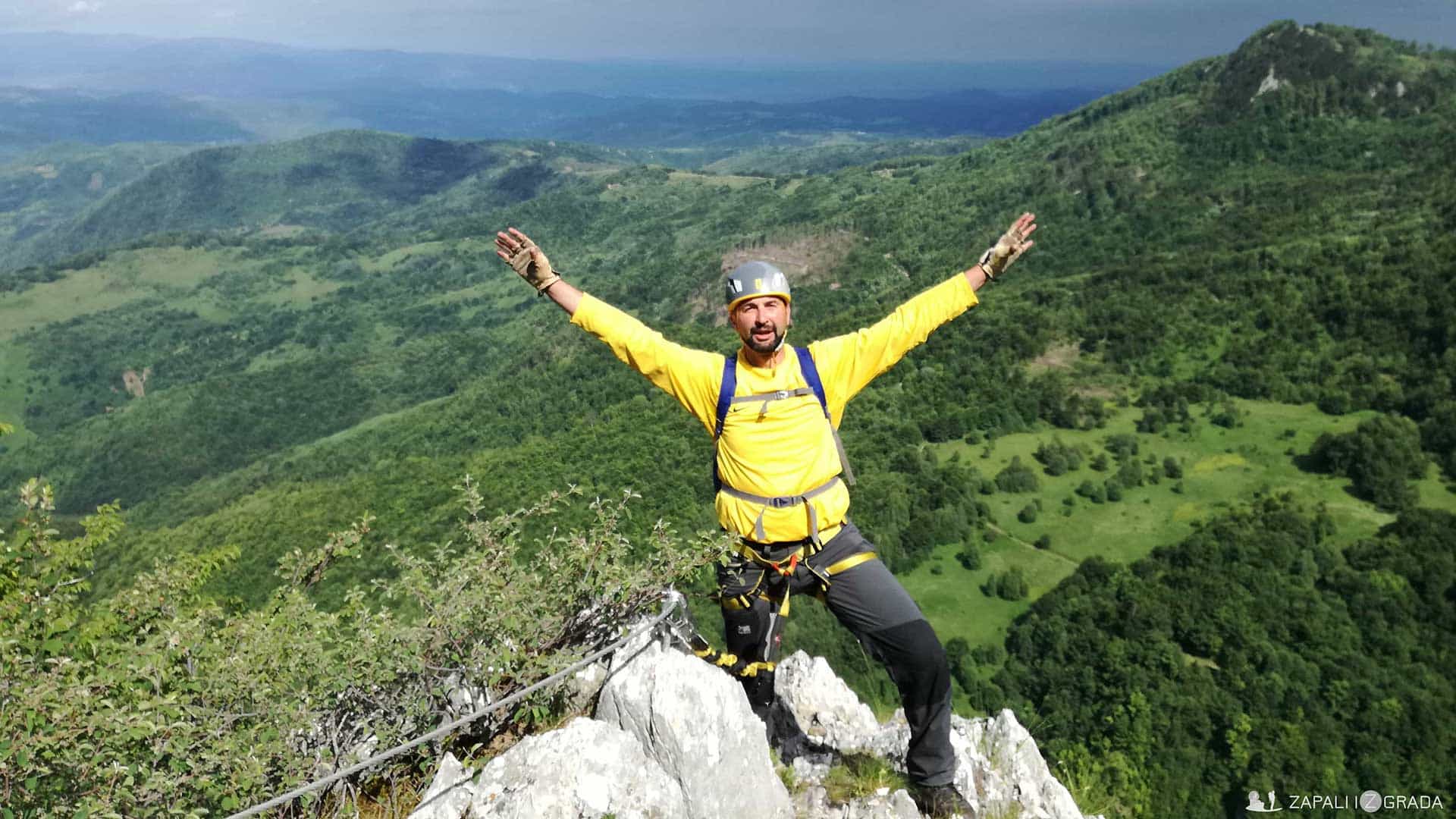 From there, we had a much better view of the plans and projects to build a hanging bridge and another via ferrata, leading to the top of the third rock of Berim, which would raise this adventure to the most respectable level possible. 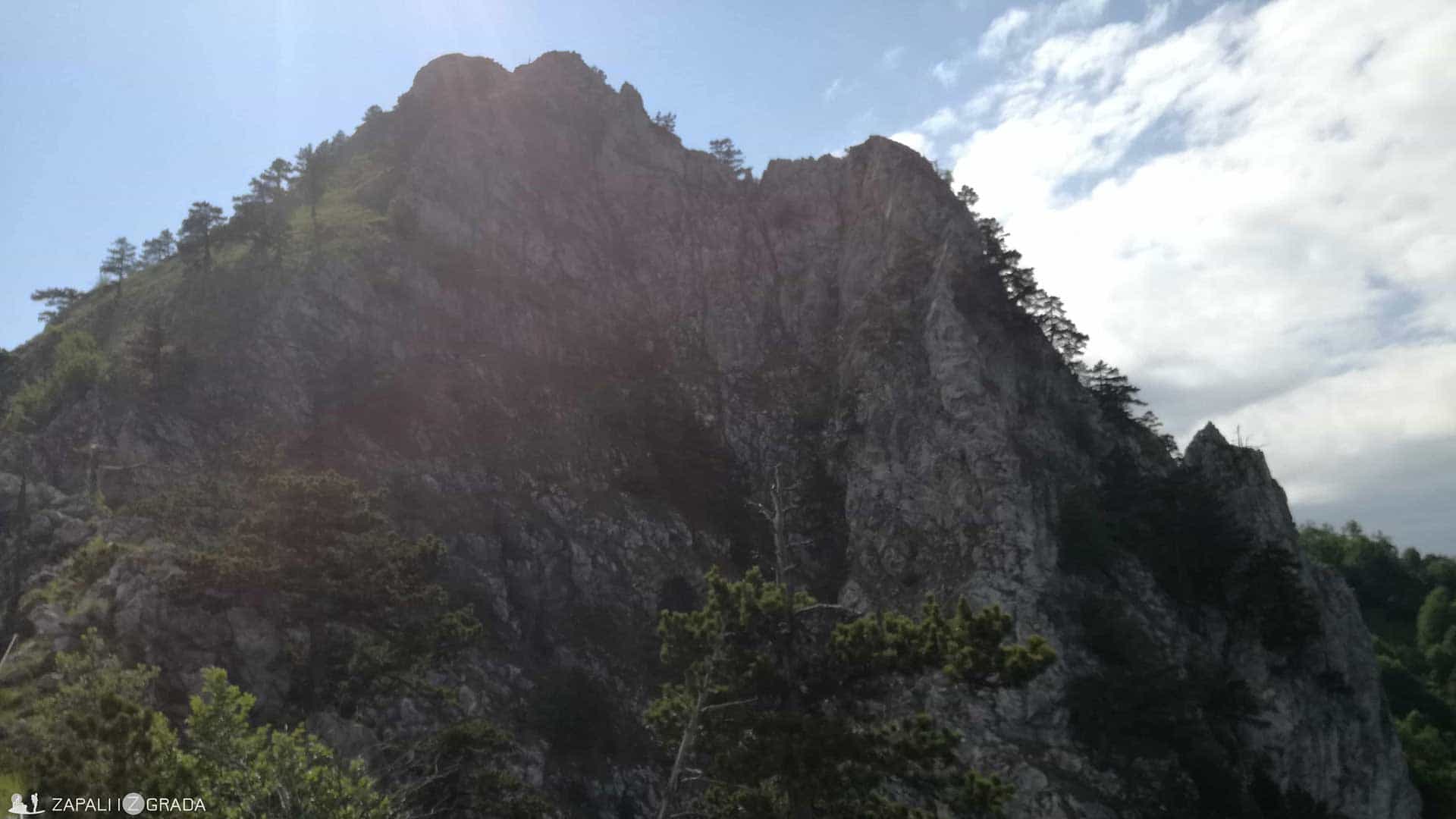 The third “tooth” of peak Berim

But, the adventure does not end here – going downhill is also extremely inconvenient. It’s a pretty steep landslide and you can have a lot of problems if you’re wearing shoes with a thin sole. I know that the terrain is extremely ungrateful, but I appeal to the people from the organization to find a solution for the return trip. 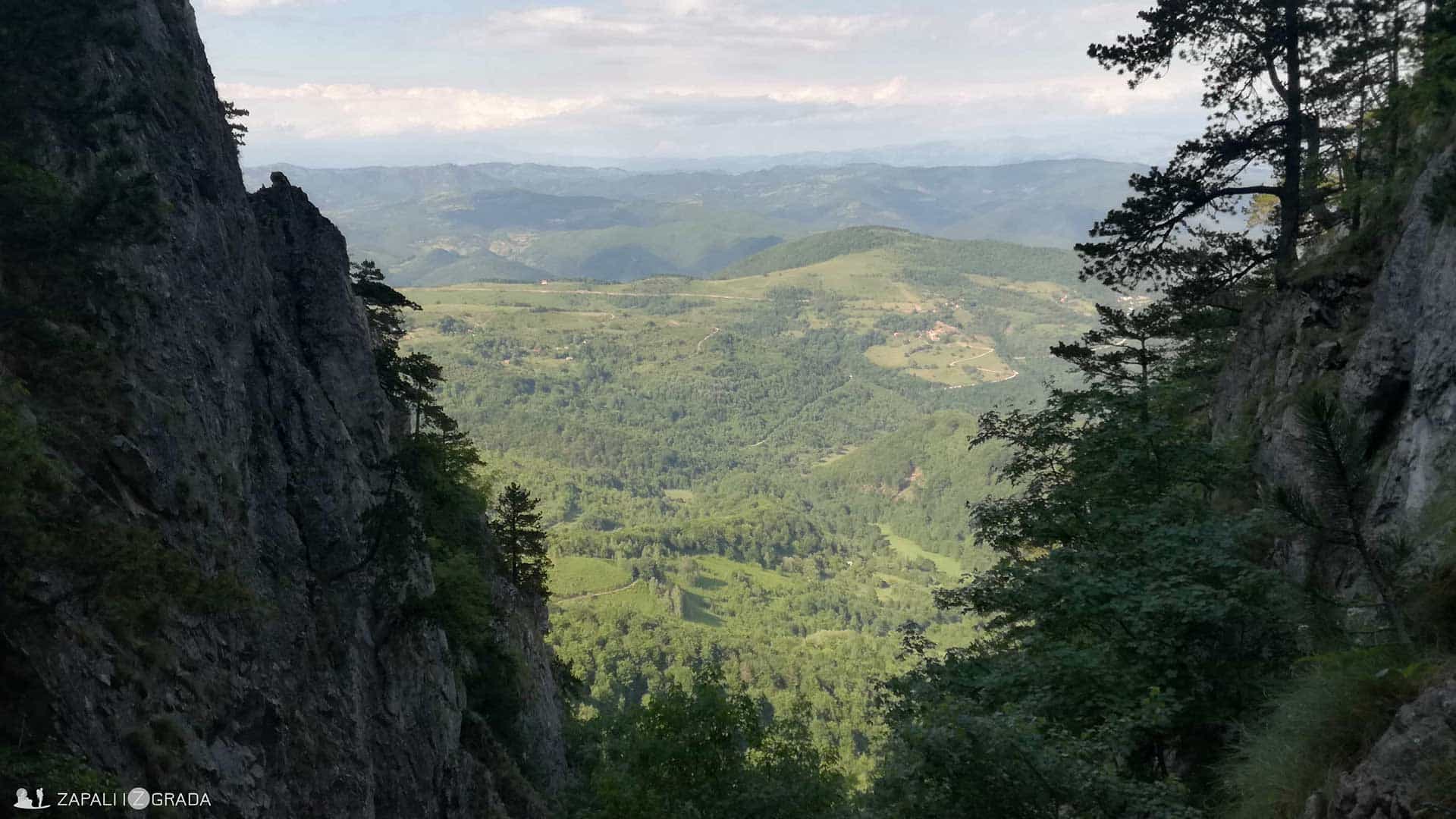 As far as hiking is concerned, 100 km of arranged paths are available. Some lead to Berim, some to Rogoznica, some are circular and include both the easy and more difficult options. We decided to take the lightweight type and visit the lookout of Rezalska Glava. You can start from the campsite, via a marked path through the forest or go by car to the slopes of Mokra Gora, but you will surely experience a pleasant walk through the forest and the colourful flowers of Musa plain. From the lookout there is a beautiful view of Lake Gazivoda and the green Rogozna. This is a tour you can also take with children. 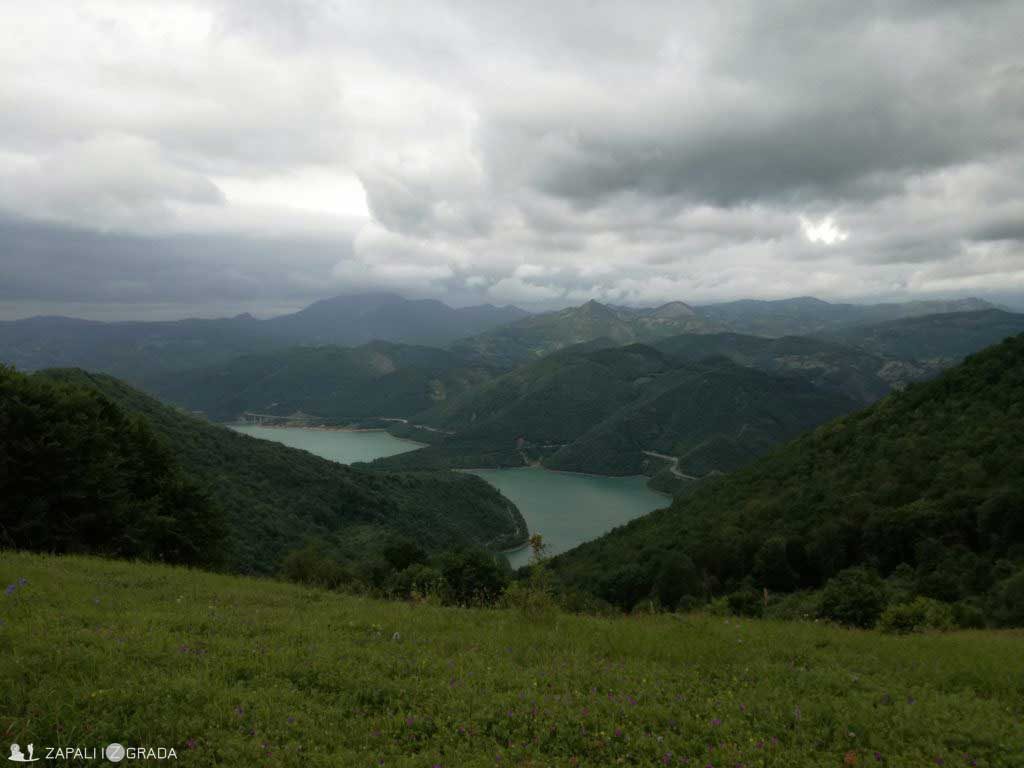 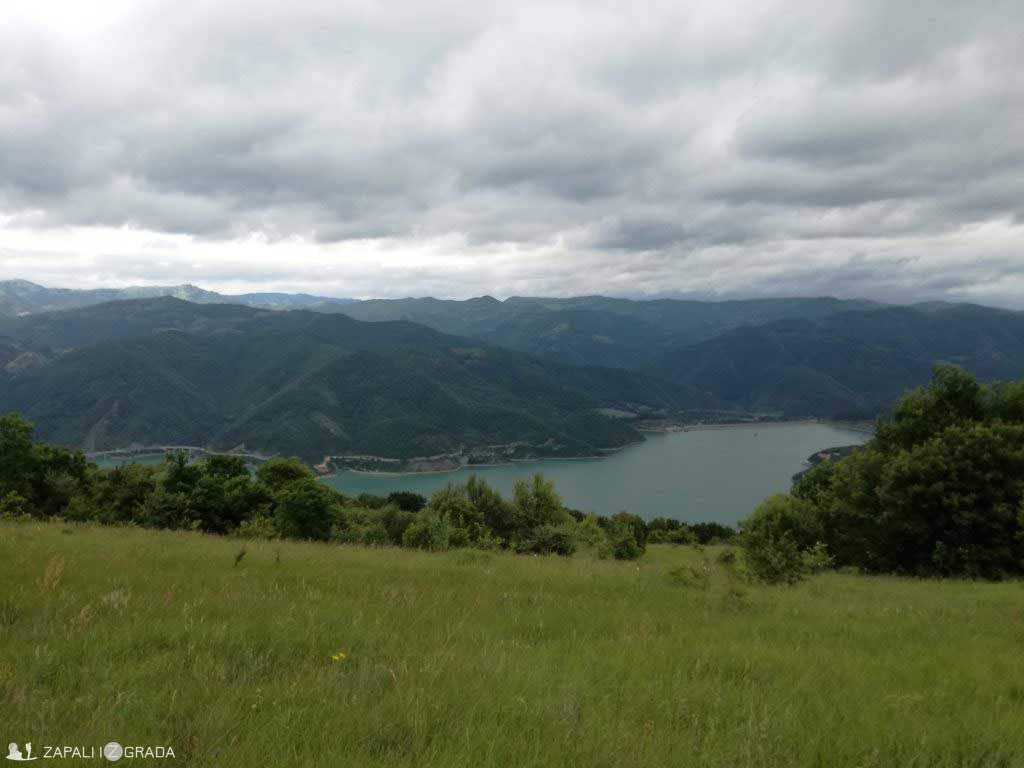 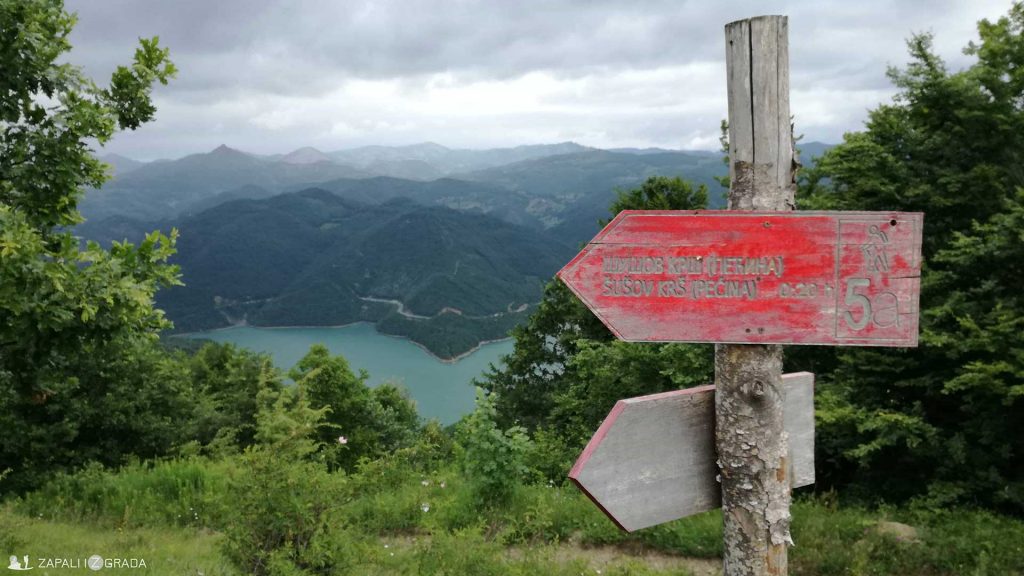 Finally, here are the basic guidelines to help you organize this fantastic trip. You can find most of the information at the Outdoor In internet presentation, and get help around accommodation, meals and scheduling of activities by calling Ricko +381653756244 or the president of the initiative Dragiša Mijačić +381638550929.