On the trail of Rajko’s gold ……

Homolje mountains are a real treasure. I cannot tell if there are more cultural and historical attractions, interesting stories or nature’s jewels. It takes months to explore only a small number of fantastic waterfalls, caves and stone bridges. To avoid the risk of spreading too thin and spoil the surprise of some future posts, I will try to stick to just one adventure.

Proudly showing off its vast forests, meadows, caves. It is especially rich in water, so here you will find beautiful waterfalls, emerald lakes and springs. As if that wealth in itself was not enough, the rivers of this region are still the place where one can find gold.
Тhe road to our today’s destination goes over Požarevac and Kučevo, and you can get there in about three hours of easy drive.

The road is in good condition and mostly empty. As you enter Majdanpek, right at the bridge, turn left and follow the signs for Rajko’s cave. After ten minutes you will reach the lake Veliki Zaton. The lake was created by damming the river Mali Pek, in order to supply the city with drinking water. It is clean and it is a favorite summer spot for the people of Majdanpek.

In the winter it could well be used for skating. To the right, there is an extension, ideal for parking and the start of the tour.

The trail starts opposite the extension, up the hill and is well marked, with all the required symbols and sign plates. This is thanks to Novak Ristanović, President of the Hiking Association “Starica”. Novak is a young hiker, full of enthusiasm and desire to help his town and this wonderful sport, but also to help anyone who approaches him with equal enthusiasm.Follow the signs and after three kilometers you will reach the peak of mountain Starica, which towers over the city and embraces it like a true patron. The path mostly leads through a dense, deciduous forest and it is not too demanding, although in some places there is quite a climb.

On the top, you will reach a massive telecommunications post and a great lookout. Starica is not too high, only 796 meters, but it gives an unusual view. There is Majdanpek basin, the mining pits, a couple of “moon” landscapes, a tailings pond, and if you’re lucky, along with the sight of birds living in the rocky mountain sides, you will see Deli Jovan and Popadija, Big and Small Krš, Big Štrbac and Beljanica. Some claim to have seen the Carpathians at an exceptionally clear day, which this author had not had.

When your soul had sufficiently taken in of this inspiring view, you go back the same way until you reach the road sign and the beginning of a circular path. This 12-kilometer-long trail leads to Rajko’s cave, revealing along the way the widest variety of nature’s wonders. Basically, you stick to the right and follow the signs to the final destination. You can relax and enjoy the tamed landscape, colorful flowers and the sounds of the forest all the way to the intersection, with the sign for Rađena river stone gate.

Since I was visiting at the beginning of March, the setting in the woods was very interesting. As far as the sun could reach, you could feel the awakening of spring – there were hints of buds on the trees, the first snowdrop flowers and the chirping of finches, while out of sun’s reach the winter did not give up – the wind roared and in a seemingly lifeless atmosphere you could only hear the squeaking of snow underfoot.

At the intersection, turn left. As you follow the stream, you will be followed by a muddy terrain, until you come to a clearing with a cheka for wild animals and resort for the rangers. 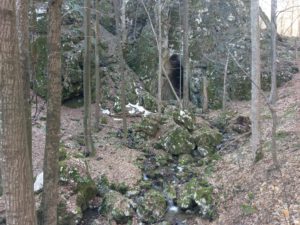 Very quickly you get to the Rađena river stone bridge. These bridges or gates, also called prerast are extremely rare and look like an architectural arch that “strayed” in the woods or a shallow cave where the beginning and end are almost connected. This prerast is one of the smaller, but they are so few that each is extremely valuable. 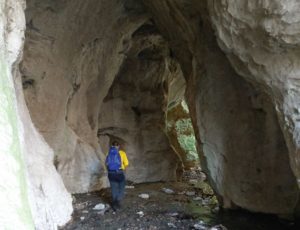 When you reach the plateau where Paskova river meanders, you will need to pay attention and put some effort into finding the markings, because the road is turning by 180 degrees. Not far from there we come to the part where Paskova river flows into Rađena river and with joint forces they tear the walls and disappear under the mountain. I have always been intrigued by mystical underground rivers and their disappearance from the public eye.

The trail continues through the Wolf’s valley, or Valja Lupjasku in the language of Vlahs. I don’t know the origin of the name, but the landscape is like a fairy-tale funnel of dense forest and should you be attacked by wolves you would not have many places to escape. Fortunately, wolves remain only in the name of the valley.
The end of this extremely interesting track is the real icing on the cake. It is at Rajko’s cave. But it’s not just one cave, as marked on the signboards, it’s an entire complex. There is a plateau, the resort and the river. Everything is united under the name of Rajko.

To schedule a visit call Marijana – +381 66 800 6576. She is the cave guide and works in the Tourist Organization of Majdanpek. Her level of enthusiasm and love of work are rarely seen. Since she recognized us as kindred cave lovers, she hosted us with a number of stories and legends which she does not reveal to everyone. If you are interested in these stories, head to Rajko’s cave.

Rajko’s cave is amazing. I was completely “bought”. As if it contains the most beautiful parts of other caves. Here you can see not only stunningly beautiful cave jewelry, but also halls, waterfalls, rivers, lakes, cascades …

We were especially lucky to have been there at the right time of year, when the old snows “fuel” the groundwater’s unstoppable gush and roar, in numerous rocky overflow tubs and swimming pools. Such a landscape can only be seen for two or three weeks a year, more precisely – in early March.

“In the valley near Pek,
From the cave a river flows.
The cave’d been found by Rajko,
So it takes his name.
The river flows and murmurs,
From the cave a story is told
Opened in the 20th century,
most beautiful in the whole world.
Now it has visitors plenty,
Passing through the corridors everywhere
To view this treasure,
Which nature has created. ”

The cave was named after Rajko, the leader of outlaws fighting against the Turks in the 19th century. According to the legend, Rajko kept a tavern in the village Rajkovo, and at night he robbed Turkish caravans and hid the treasures in the cave. People have been breaking into the cave, treasure hunting for decades.

The cave was first explored by Jovan Cvijić in 1894. The teeth of cave bears and crystallized bones of ice age animals were found during excavations. There is a small collection of bones exhibited near the cave exit, including even the remains of hyenas?!

The total length of cave channels is 2304 meters, ranking it among the longest caves in Serbia. It consists of two parts: the subterranean and the part with the springs, with two types of underground caverns – water and dry. They merge into a circular path that leads visitors into the magic world of speleology. The new LED lighting, fences along the paths, wireless audio system for

tourist tours and a local guide who takes you through halls full of bats and cave ornaments (stalactites, stalagmites, cave pillars, moss-covered tufa tubs); all of these are the pride of Majdanpek. Tourist trains are also planned, which would take visitors through the darker and lower parts of the cave, which will be a unique attraction of our country. The price of ticket is 300 dinars.

The entire adventure takes about seven hours, including breaks. You can organize your own or go with the Hikers Adventurers club. If you are not in the mood to drive to Belgrade the same day, you can spend the night in the building of the Faculty of Forestry in Debeli Lug, seven kilometers away from Majdanpek. Our exceptional host Dule Vasić (+381 60 761 0001) welcomed us with a smile, coffee and brandy. A decent accommodation is 800 dinars, plus Dule is a great person to talk to, a rogue full of adventure stories. Of course I decided to spend the night there and continue the journey tomorrow, to discover some new corners and conquer new peaks of the mystical eastern Serbia.