Save the Serbian Colorado!!!

I dedicated a significant part of my life to the love of nature, and this blog is my way to promote and spread this love. So far, I’ve written only about my adventures in the Balkans and the beauties I encountered, providing information needed to experience them. However, sometimes I have to do more than simply advertise.

This text represents an appeal to preserve a magical landscape on Stara Planina, threatened by those in power because of the lack of water in the artificial lake Zavoj, where the hydroelectric power plant is located. I will try to explain this in more detail. 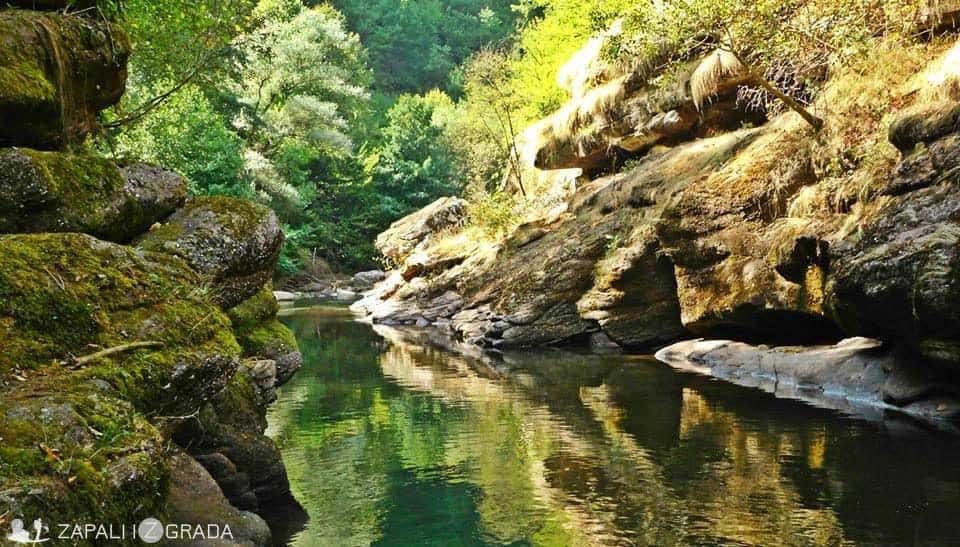 Mystical and wild, ecstatic and opaque, Stara planina (“Old mountain”) offers endless possibilities. Anyone who’s visited it at least once, feels from the soul’s depths that there is no other way, but to come back some day. Once visited, this world of spells is constantly inviting, tempting and reminding of moments of excitement. It is a world of dense, centuries-old forests and starry skies, gorgeous gazebos and slopes that resound with the bleating of sheep, the clip-clops and rush of wild horses. It’s a world that will capture and overflow all your senses, and get under your skin before letting you go back into the big, dirty city. 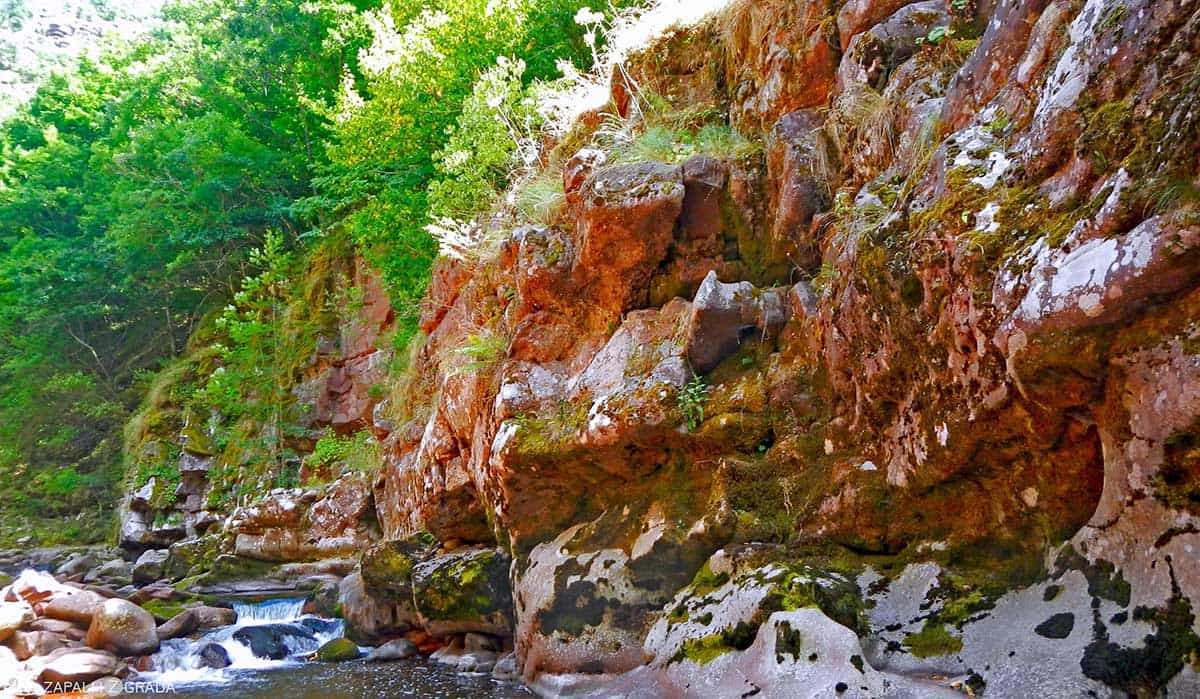 Although nature has been very generous to this region, people’s lives have always been difficult. It was necessary to push hard, just to survive. This region, regardless of which of our previous states it belonged to (Yugoslavia, Serbia & Montenegro, Republic of Serbia, etc.), was always taken out of all plans of developments, especially after the Second World War, when a tendentious destruction of the Serbian countryside was taking place. Today, we find locked village houses, invaded by spiders instead of hosting a live fireplace. Nevertheless, the remaining people in these archaic villages have a broad smile and even broader souls. They will welcome any traveller as if it was a rich aunt, leaving them an inheritance. 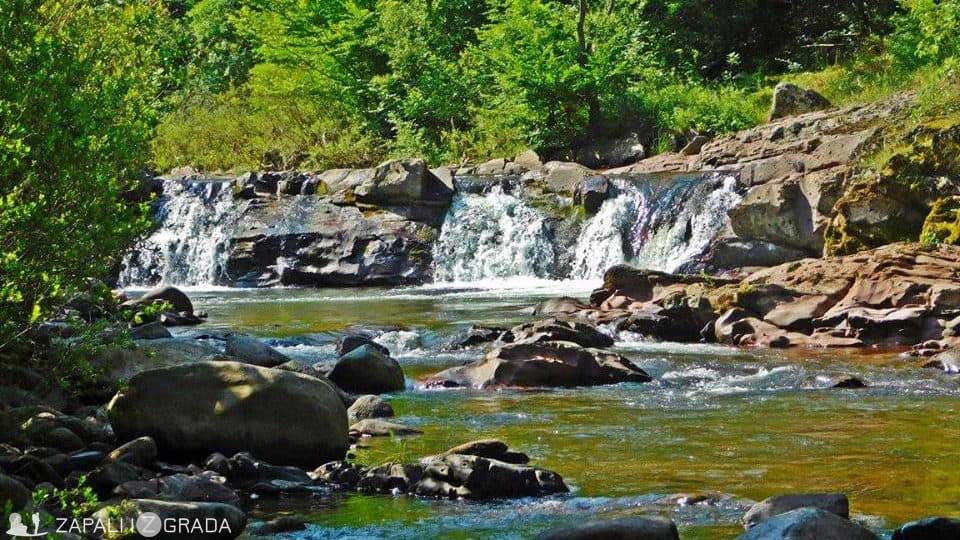 In addition, the preserved nature of Stara Planina is inextricably linked to rich history, proud tradition, but also interesting legends. Do not be surprised if, along with hikers and cyclists, you come across treasure-hunters looking for the grave of Attila the Hun, the lost gold of the once largest Roman mint in the Balkans or the hidden treasure of priest Martin. 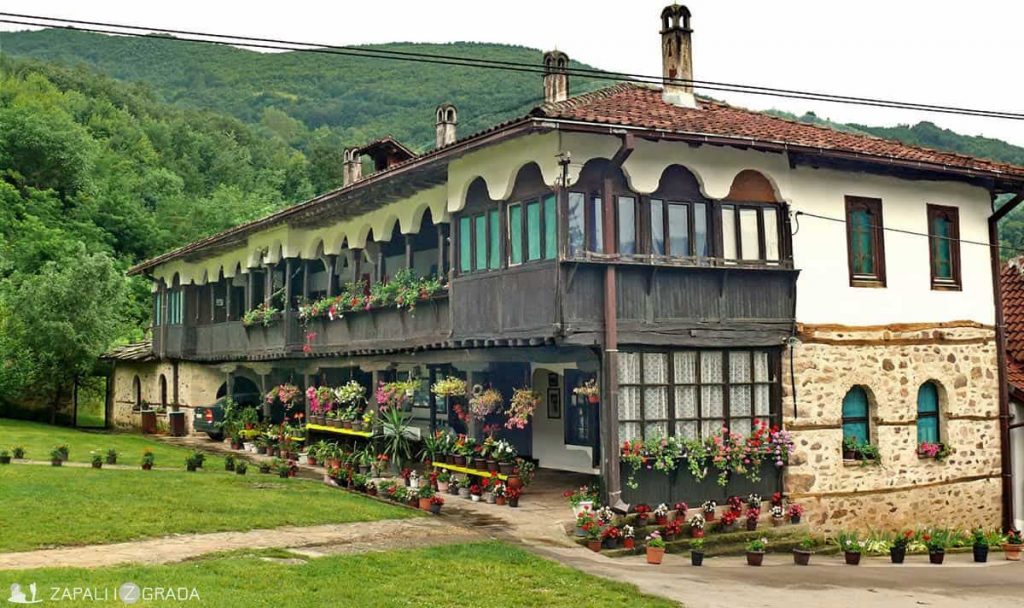 The canyon of the river Toplodol is tucked in-between the slopes of Stara Planina, near the village of Topli Do. The easiest way from Belgrade is through Niš, Bela Palanka and the village of Temska. The road takes you pass the monastery with the same name. It is interesting that this temple, dedicated to St. George, had been repeatedly destroyed and renewed, but also that at the beginning of the last century it was turned from a male to a female monastery. The monastery is widely known for the production of herbal remedies and balms against psoriasis, herpes, fungi, eczema…

The recipes were brought by the Russian nuns when, after the civil war in Russia, they decided to spend the rest of their lives in Serbia instead of the cruel Siberian wasteland. 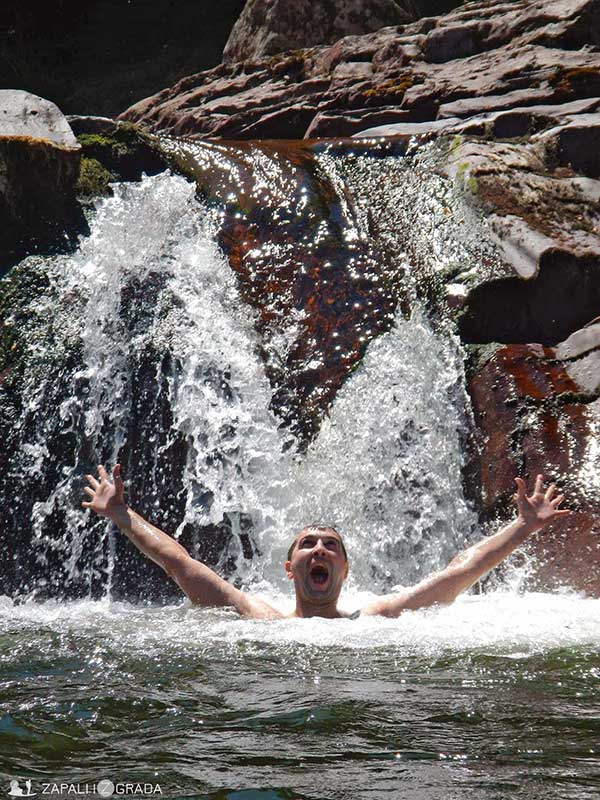 As beauty is in the eye of the beholder, I can freely say that the canyon of the river Toplodol is the most beautiful canyon in Serbia, which I’ve had the chance to see so far. Its purity and meekness provide a feeling of peace and tranquillity. Even though I was there for the first time, I completely succumbed to that harmony; all seemed in place, as if I had always belonged there.

We started the action, led by KAUP and their prominent guide Zdravko Ševo, by entering the canyon about ten kilometres upstream from the monastery. 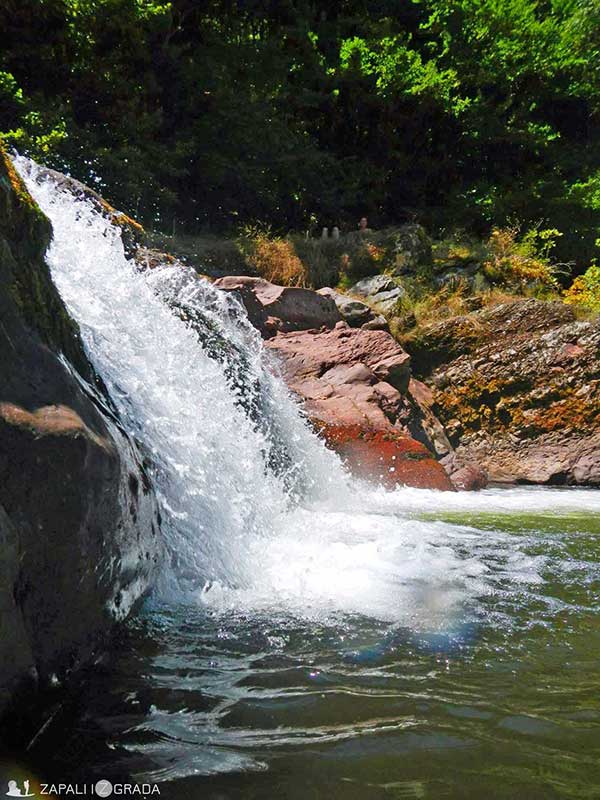 You can start from a further point, but you need to know the mountain well and have enough time. Through the bushes and sporadic deciduous forest, we descended to a beautiful waterfall, which, with the sound of rhythmic swishing, falls down into a pool ideal for swimming. 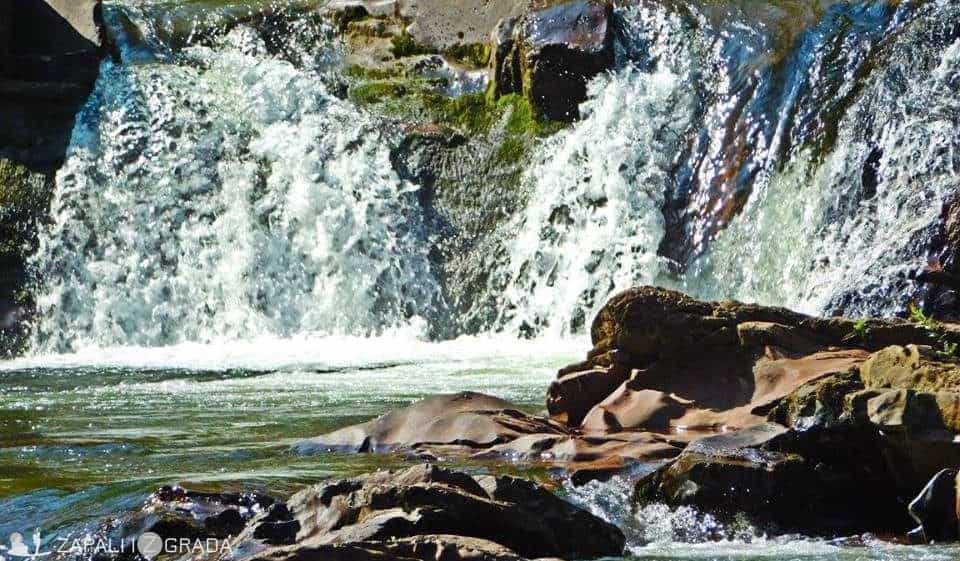 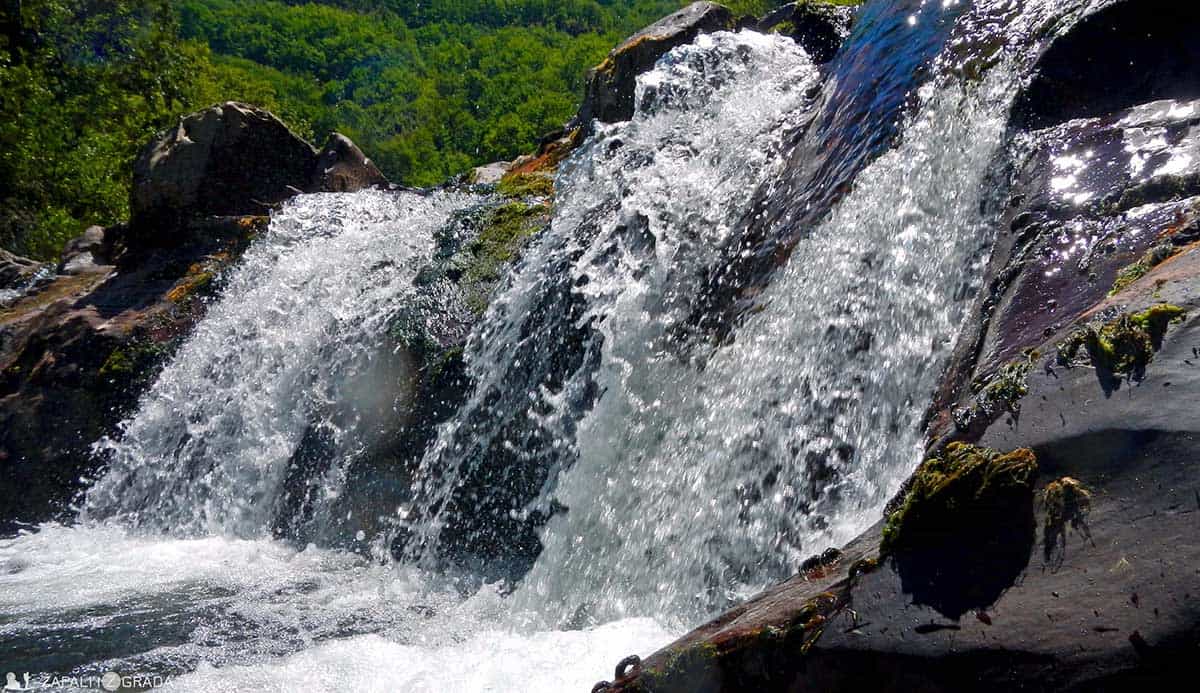 The power of the wild mountain is noticeable in every drop of this perfectly pure river. It was unbelievably pleasant to swim in the pool below the waterfall. This natural shower spurts burn all the stress and negative emotions accumulated as a result of life in the urban jungle. 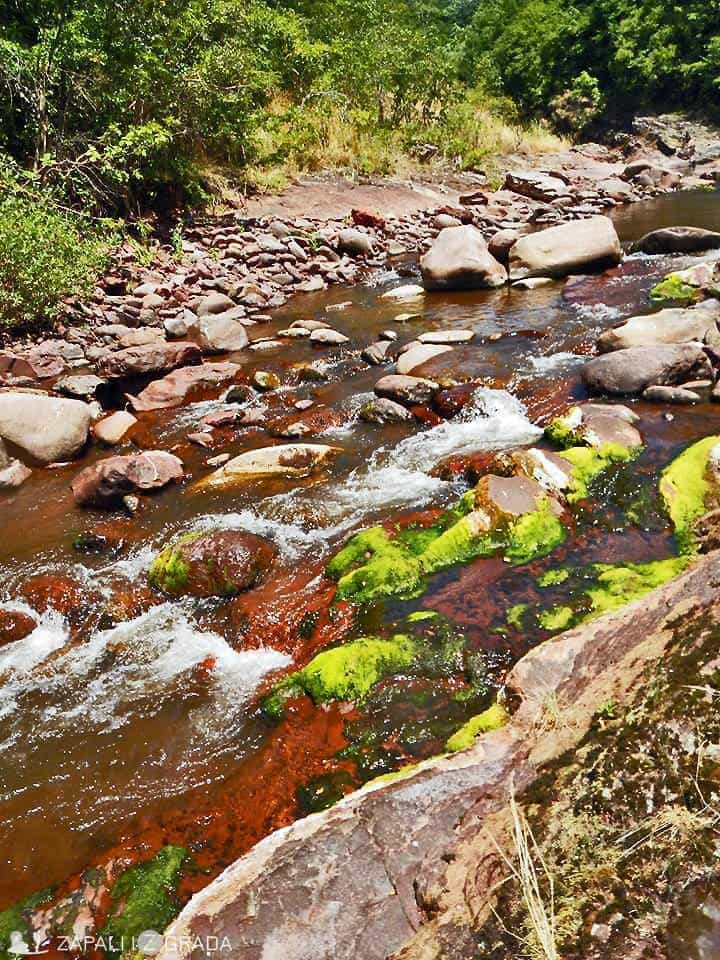 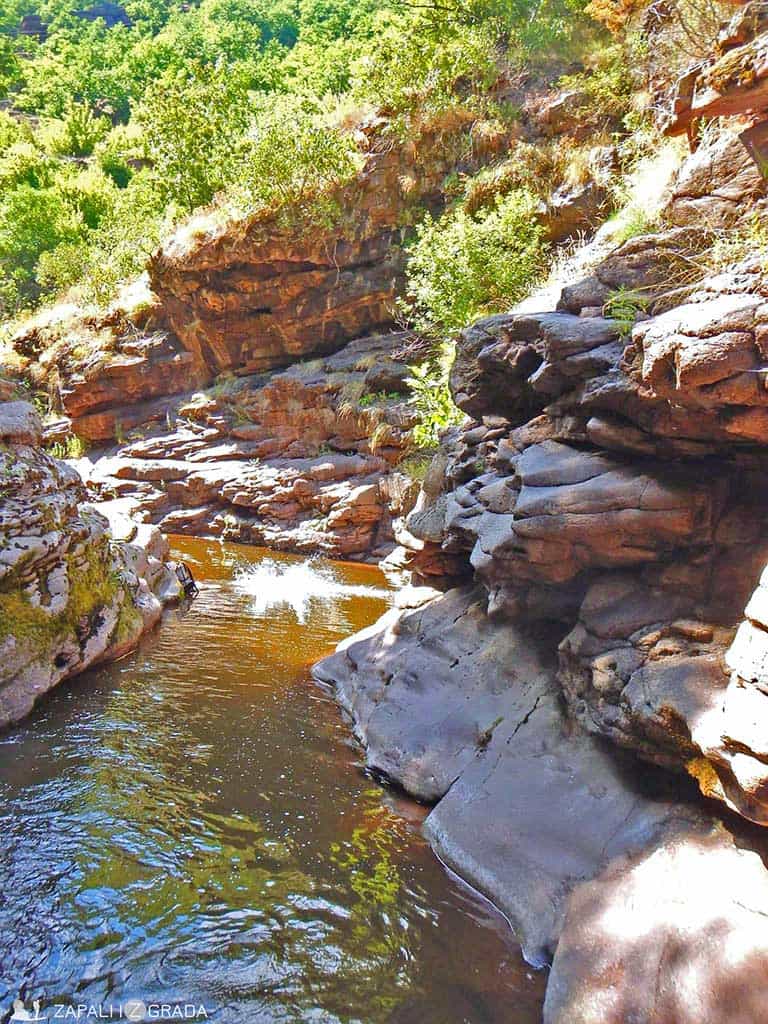 It was so nice and diverse that I had the illusion of being in a movie set. At one point it was like watching the world through a Photoshop filter. 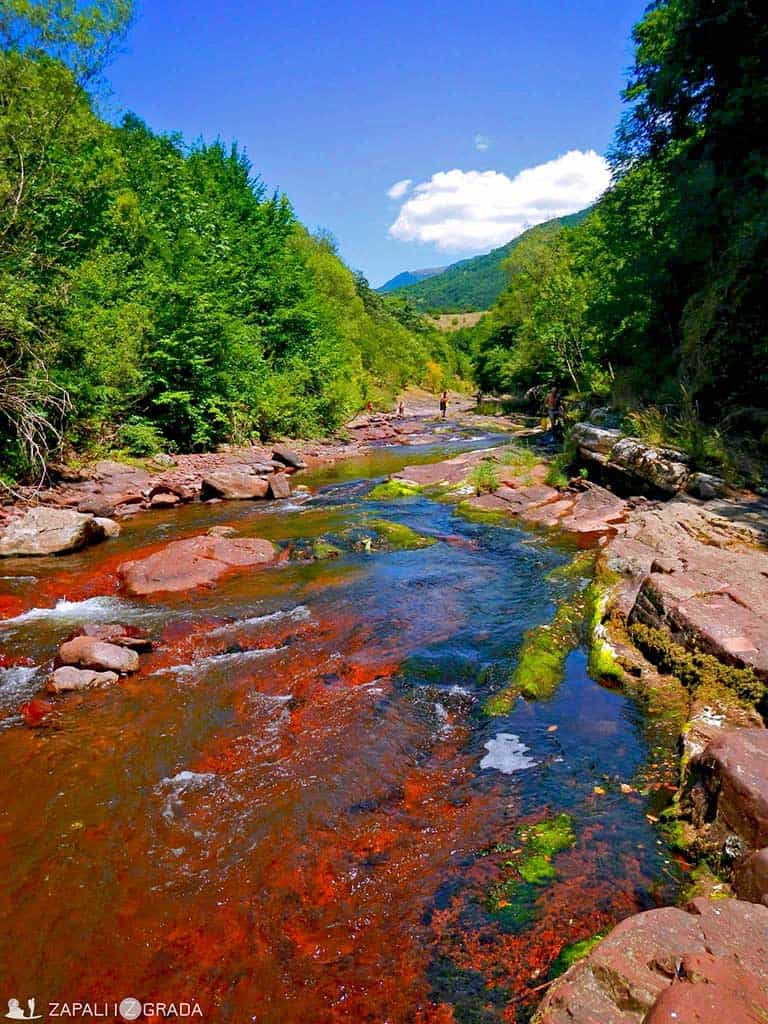 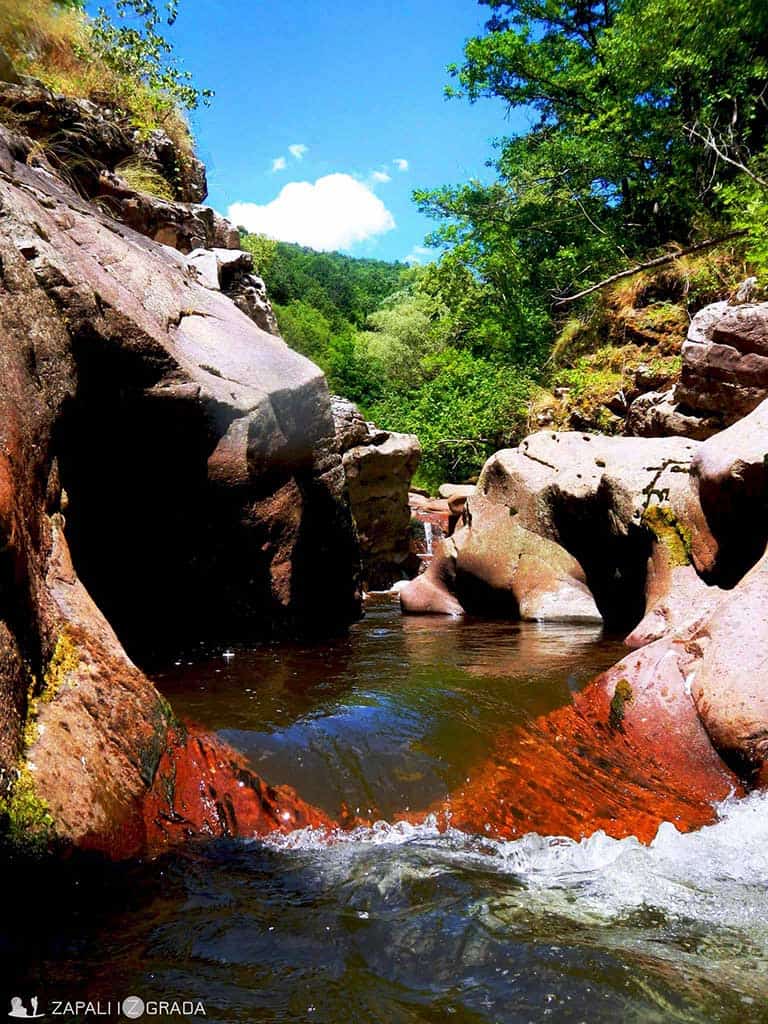 The reddish-brown leaves flickered in the breeze, and the lonely shepherd cottages made of red clay with red roof plates peered behind the same-coloured rocks. The river was distracting our attention from that sight, swirling in the riverbed cut out of red sandstone. 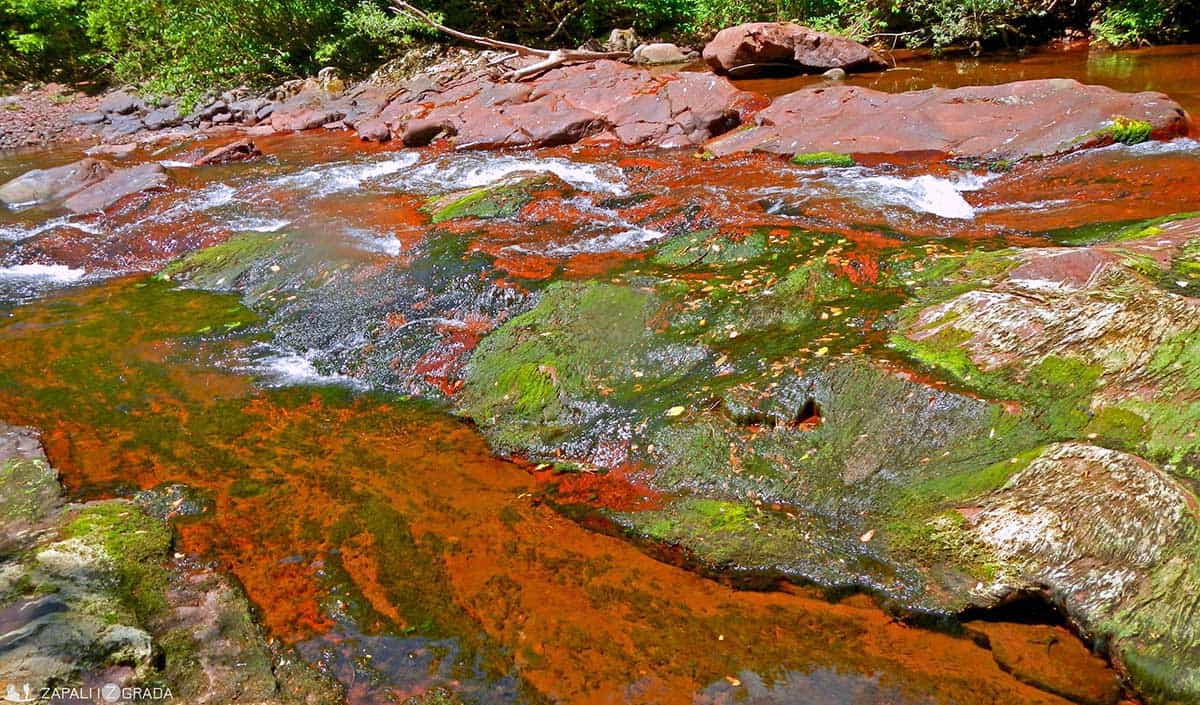 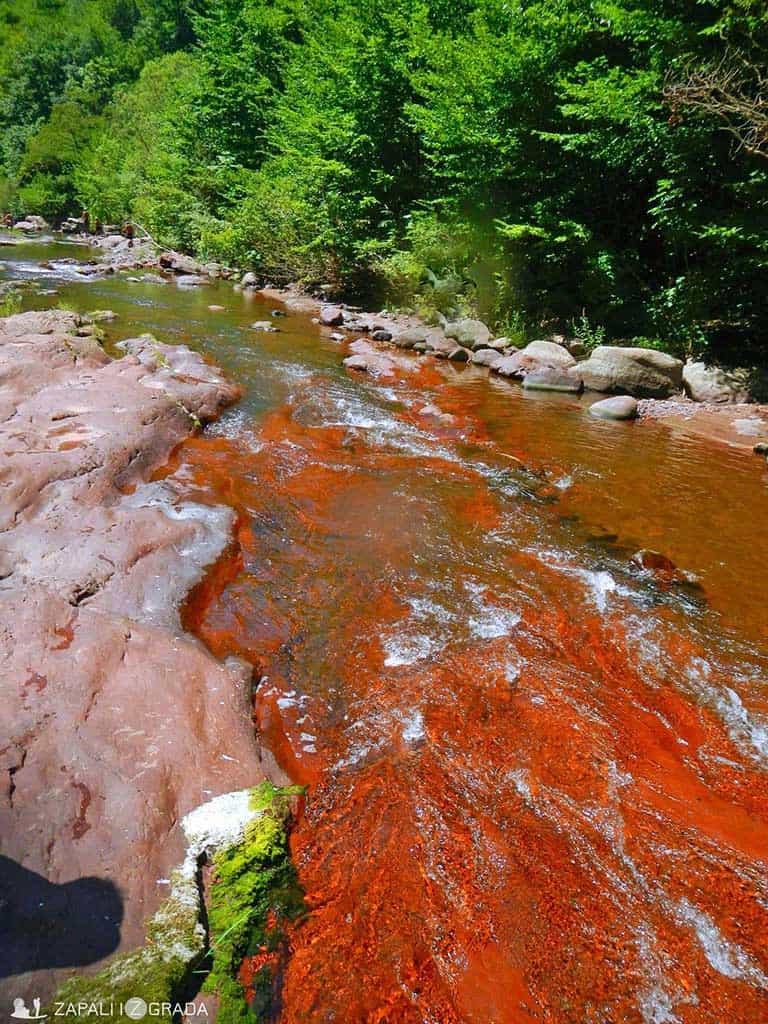 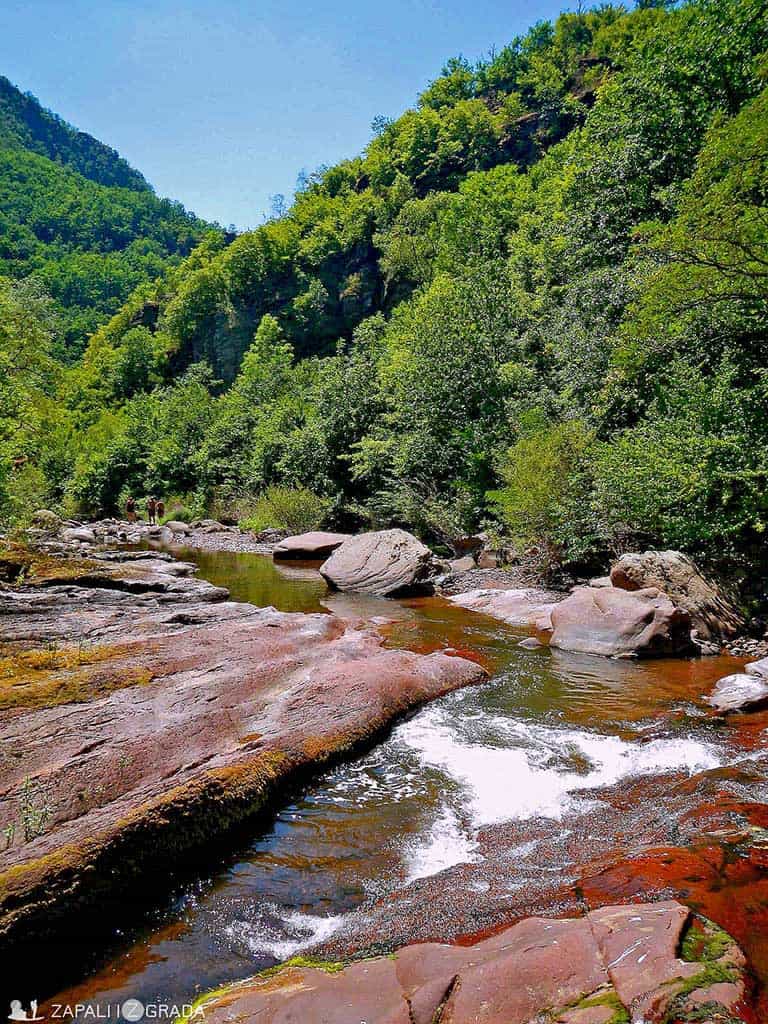 Seeing this scene, it was clear to me why this canyon is called the Serbian Colorado. Already behind the corner, due to some other ingredients in the rocks, the river becomes green, and in some places where a natural jacuzzi is formed, even white. The white colour reminded us of the snows of Midžor, the highest peak of Stara Planina, which, by melting every year, creates waterfalls, breaks the canyons and overall increases the flow of rivers in this region. 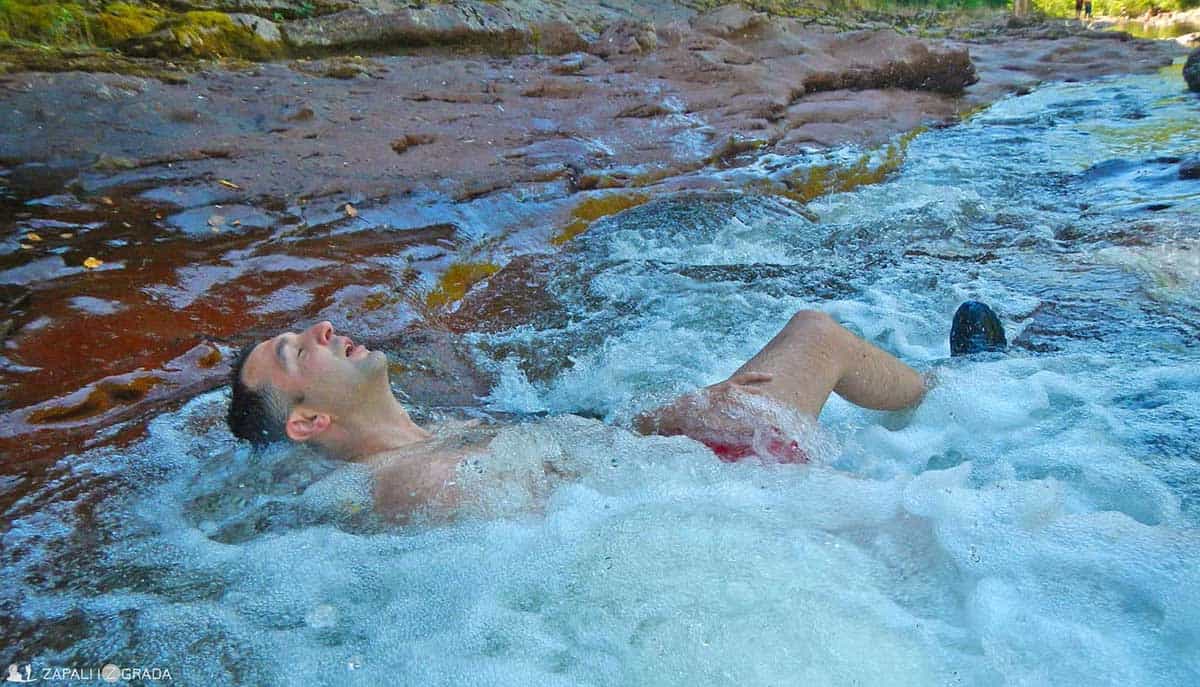 You can pass some parts of the canyon only by swimming, which gives the whole adventure an extra flavour. So, consider which things you want to carry with you. I recommend only a swimsuit and sneakers for slippery rocks, and if you need anything else – keep it in a waterproof bag. 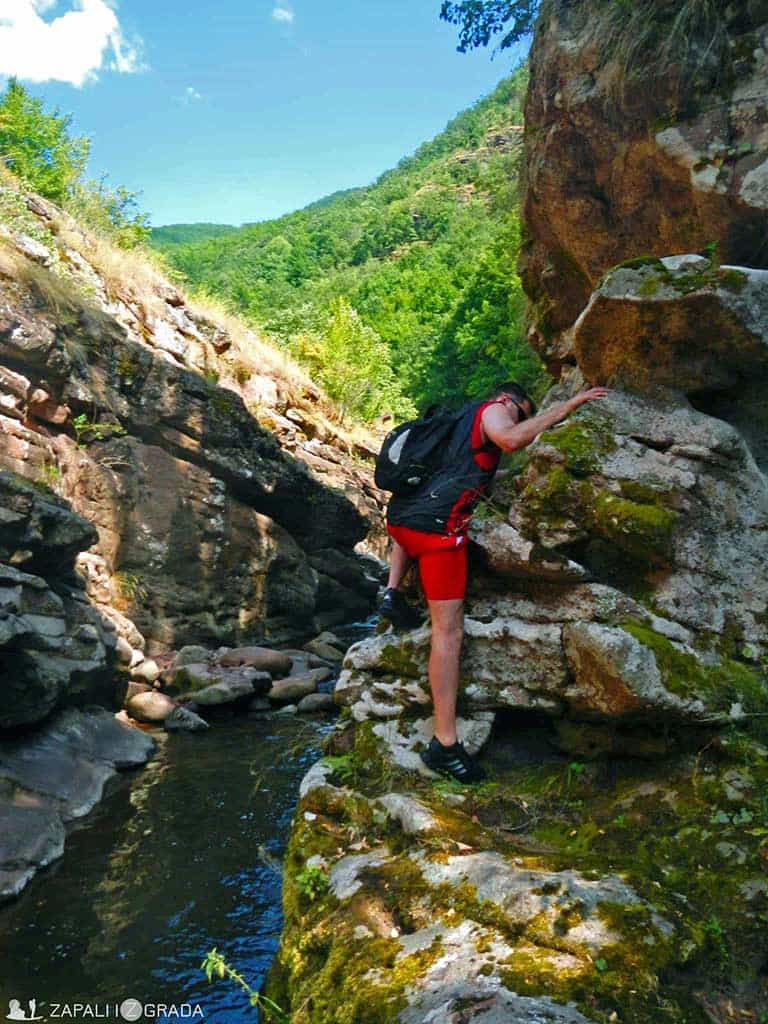 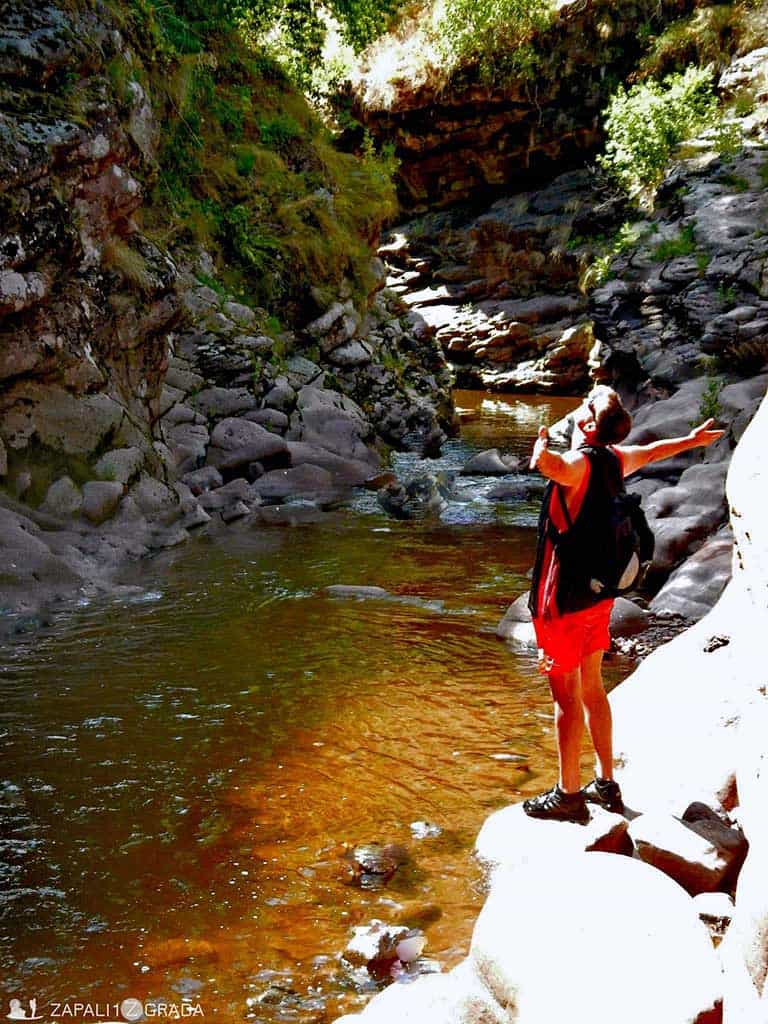 Otherwise, you will have to jiggle with your backpack to keep it dry, like I did. The river is full of crustaceans and brown trout, which is a sure sign of high quality, clean water. It is also an invitation to fly-fishing enthusiasts who come in large numbers to the shores of this beautiful river.. 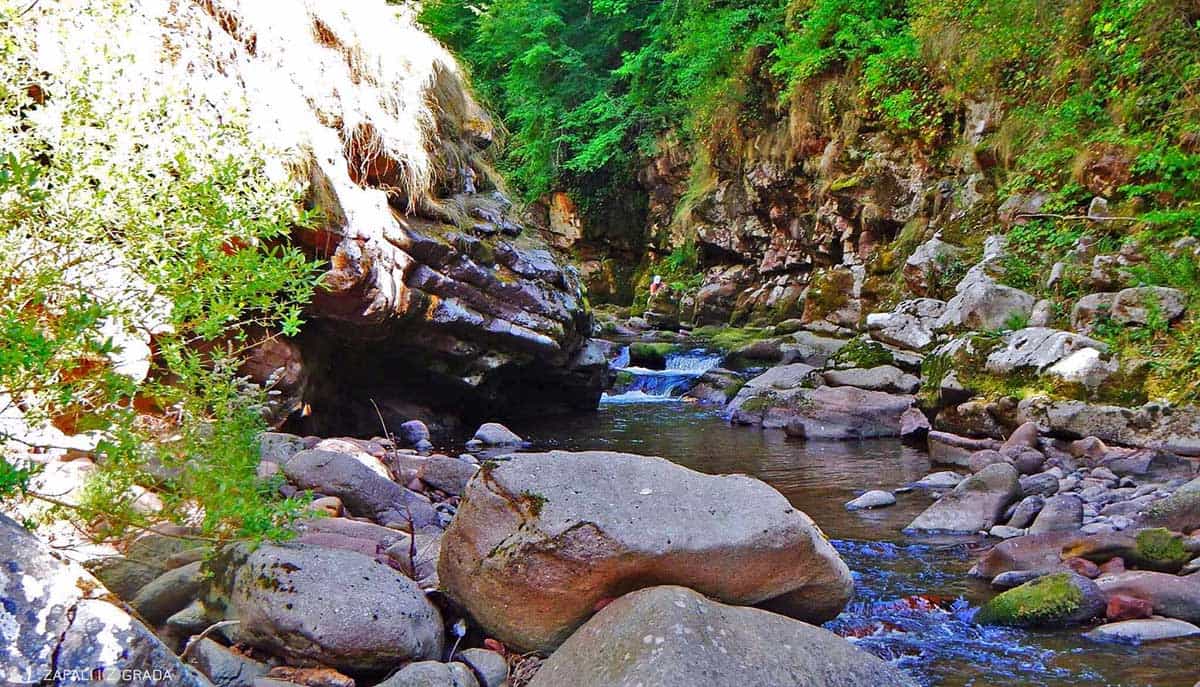 After three, four kilometres, the river Toplodol flows into river Temska. With united forces, they continue to bring life to other shores and delight other people with their beauty. There, under the local road and bridge, was the end of our canyoning. Do not miss the opportunity to visit this little paradise, because there might not be a next one. 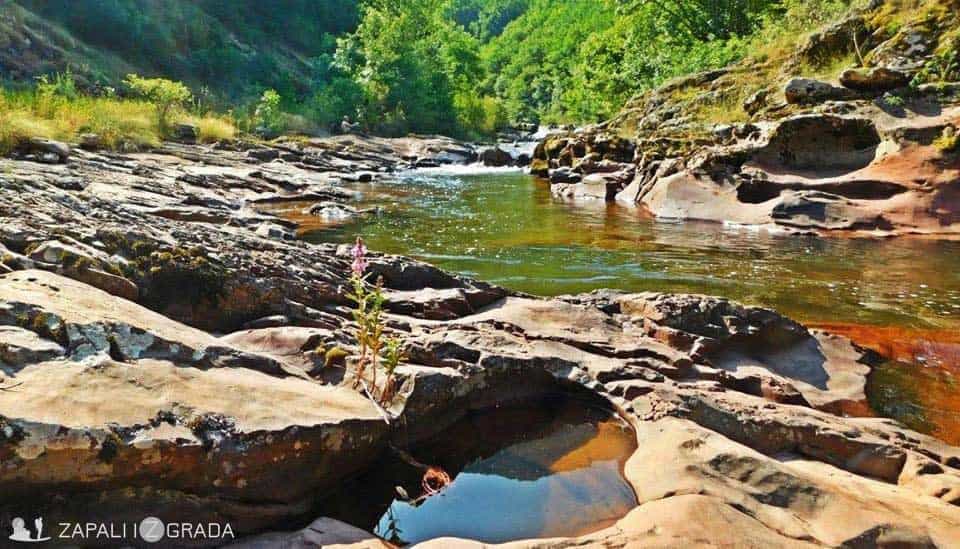 What is the problem and why there might not be another opportunity?

In this small paradise on Stara Planina, the battle is more uneven than that between David and Goliath, or Sparta and Persia. Namely, after the 1920s a dam was constructed and Zavoj Lake was formed, the river Visočica was directed by underground pipes directly into the turbines of the hydro power plant Pirot. Since there is not enough water in the lake, in the past 25 years the river Toplodol has become a target water source. Thanks to dedicated inhabitants, ecologists and nuns of St. George’s monastery, there is still an ongoing fight. 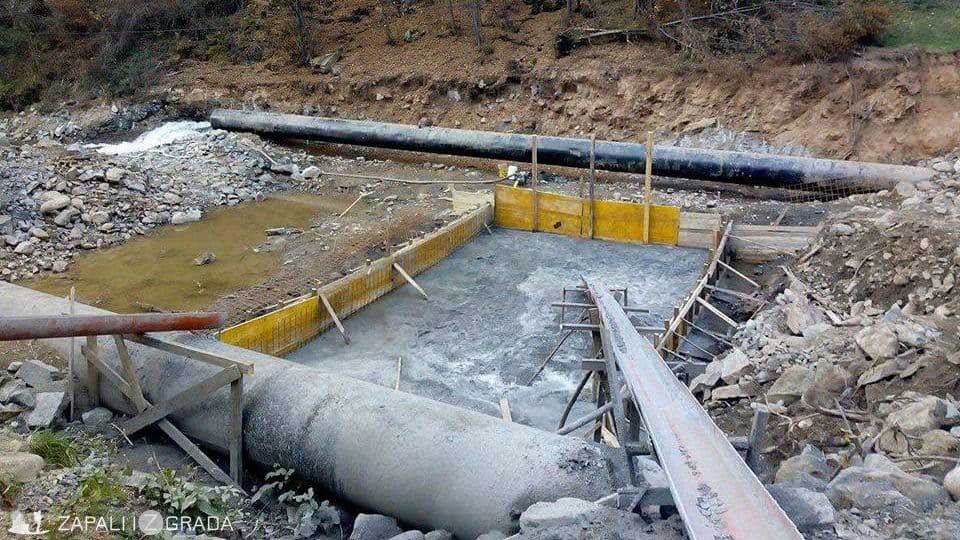 Of course, the realization of this plan would surely increase electricity production and bring certain benefits. But, this will certainly mean the killing of nature as we know it on Stara Planina. This will kill the Serbian Colorado. Unfortunately, today the benefits and advancements are often measured exclusively by the thickness of certain people’s wallets, while forgetting that natural wealth is not inherited from our fathers, but borrowed from our children. 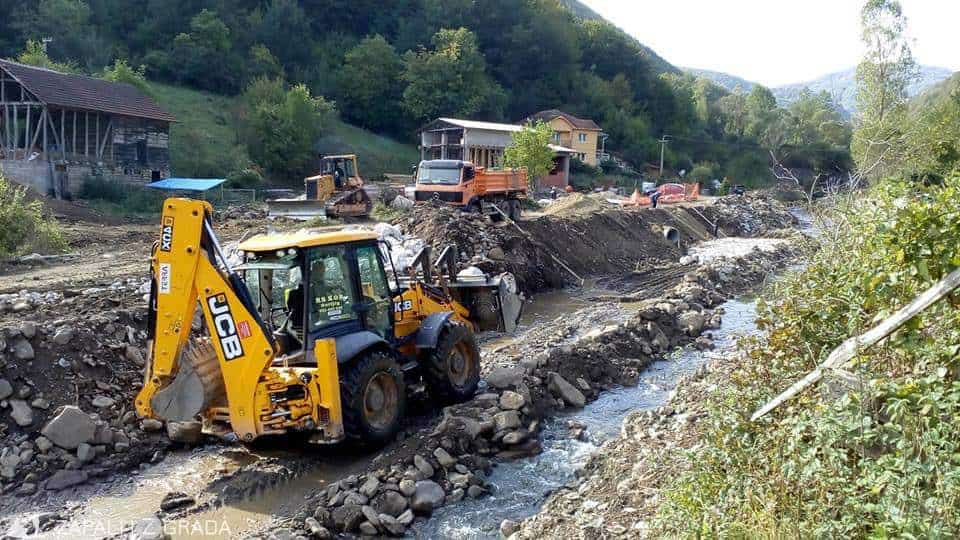 We are accustomed to have important projects done in our country without much strategic planning, without compromising agreements, or public participation in these agreements. We are accustomed to solving everything by “make it or break it” decisions, after the deal has already been made behind closed doors. And as in every unequal battle, “David’s” voice is not heard. This is truly devastating, because not all mistakes can be reset after some future elections. Some wounds never heal, some decisions are historical and final. Is it not possible to produce electricity, without killing this beautiful, rich and essential nature? Is it not possible to use renewable energy sources – windmills, solar panels, the enormous tourist potential? 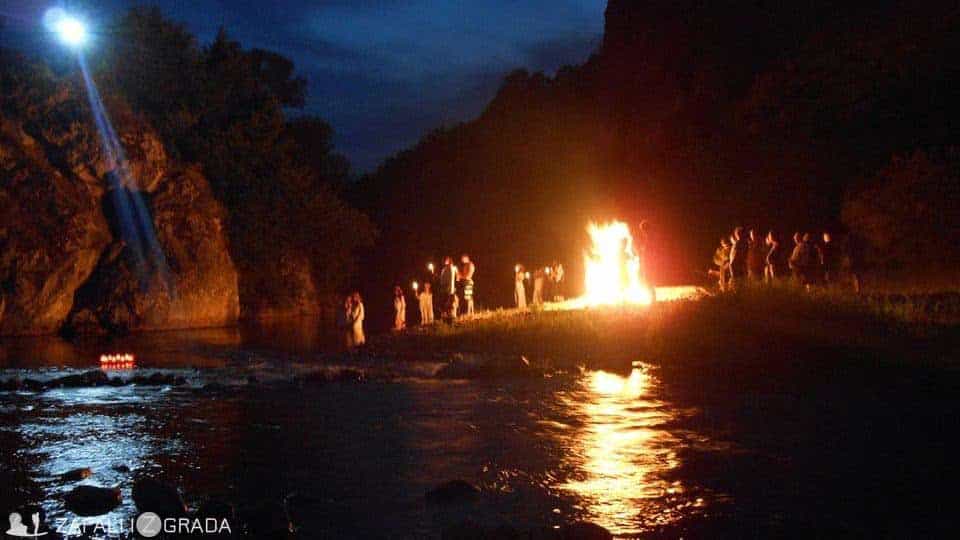 I am sure that everything was possible, but someone did not do enough, did not have the patience to listen to all the parties concerned. Those of us who love nature, as part of the inheritance which will one day be passed to our children, believe that some things cannot be paid in money. We are convinced that it is not fair that an entire ecosystem should be packed into pipes, for a few megawatts of power. We insist that the canyon of the river Toplodol is not killed. 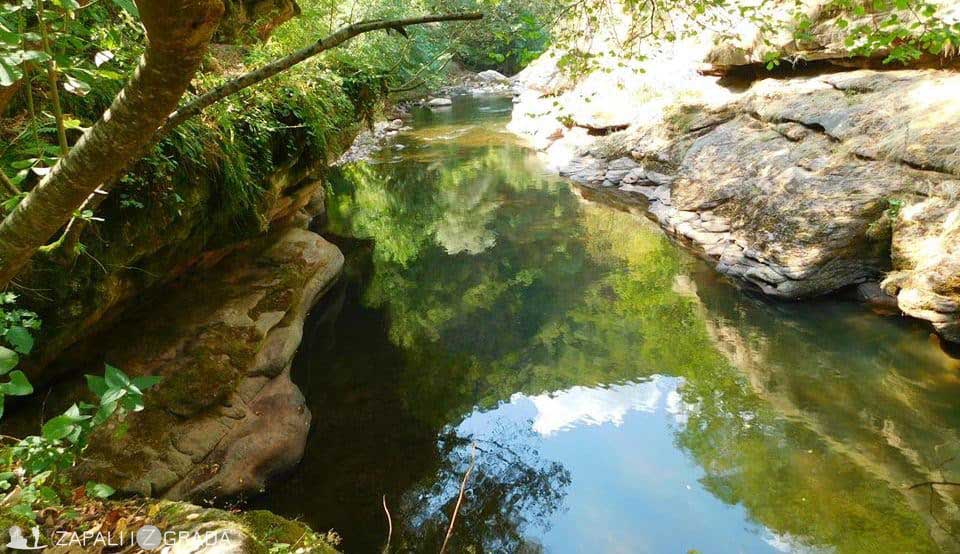 And we should not give up, there’s a still chance of winning. We should take as an example the group of citizens from Prijepolje who, by unity, love and perseverance, acted against attacks and eventually managed to preserve the river Lim. Many noble things can be done if they are made with love, from the heart. Today the heart is ticking for the canyon of the river Toplodol.