Tribuća canyon is another hidden gem of Valjevo mountains. It is the unfulfilled dream of many adrenaline addicts, researchers and nature lovers of our beautiful Serbia. I think most people are not even aware of the existence of this beautiful canyon, let alone having had the experience of enjoying it.

I have come across some comments, where this canyon is being referenced as “the Serbian Nevidio”. I can’t fully agree, although it is a flattering comparison. Still, despite numerous differences there are some parallels: both are true masterpieces of nature; you will need experienced guides; the tour is categorized as extreme hiking, and you will look weird while excitedly talking about any of them. You probably know that pat on the back: “Old man, sounds awesome!”, but you know they actually mean: “I don’t think he’s all there.” 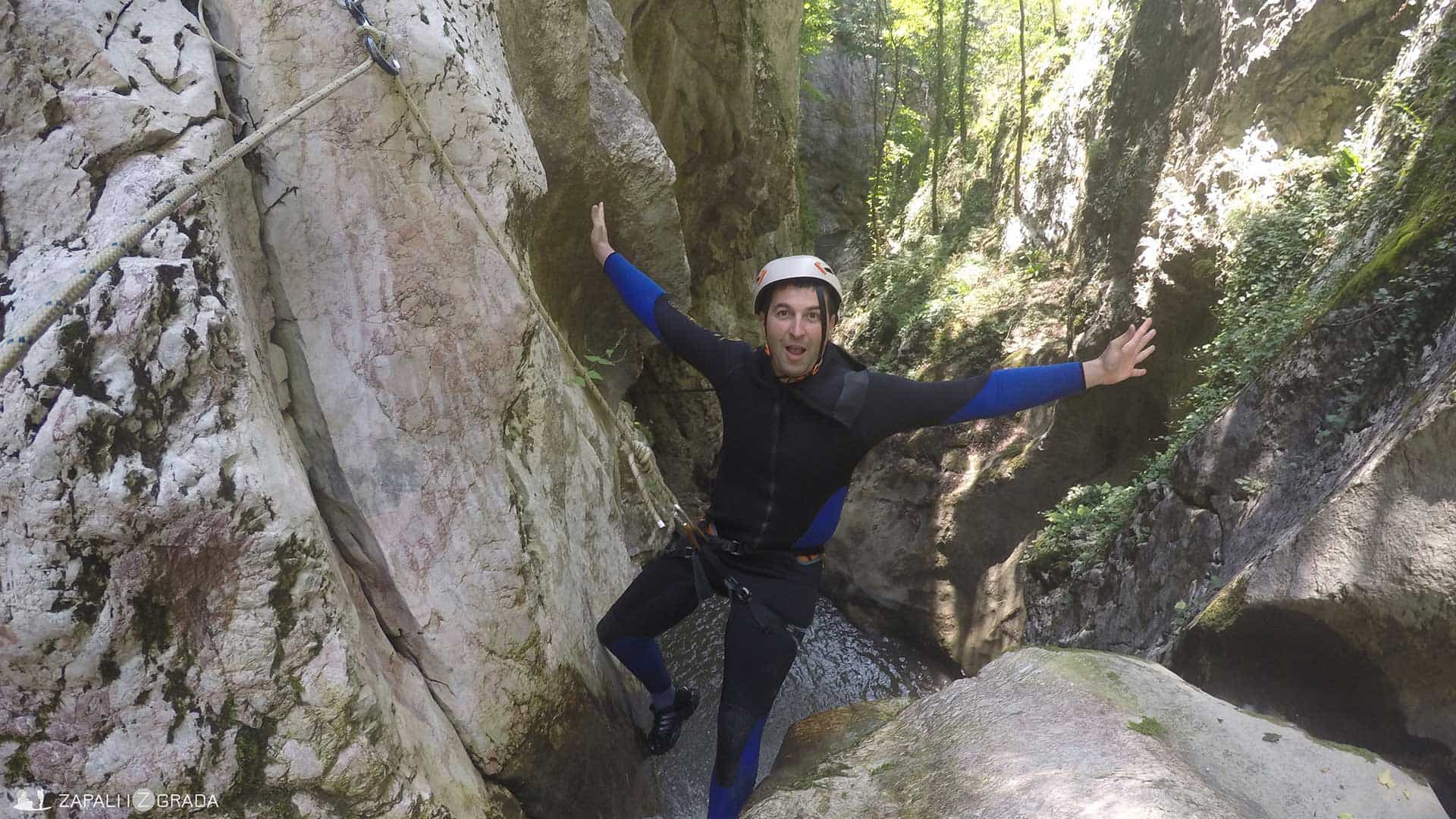 Tribuća is located in Western Serbia and belongs to the special nature reserve of Trešnjica canyon. It can be reached from Valjevo, via Debelo brdo. When you reach the monument dedicated to martyr Živan Đurđević, who was roasted alive on a skewer in WW II, turn right onto the dirt road towards Gornje Košlje village. After 15 kilometers, where the road stops, you’ve reached your destination. As in most cases, with the end of “civilization” a door to untouched nature and adventure opens up. 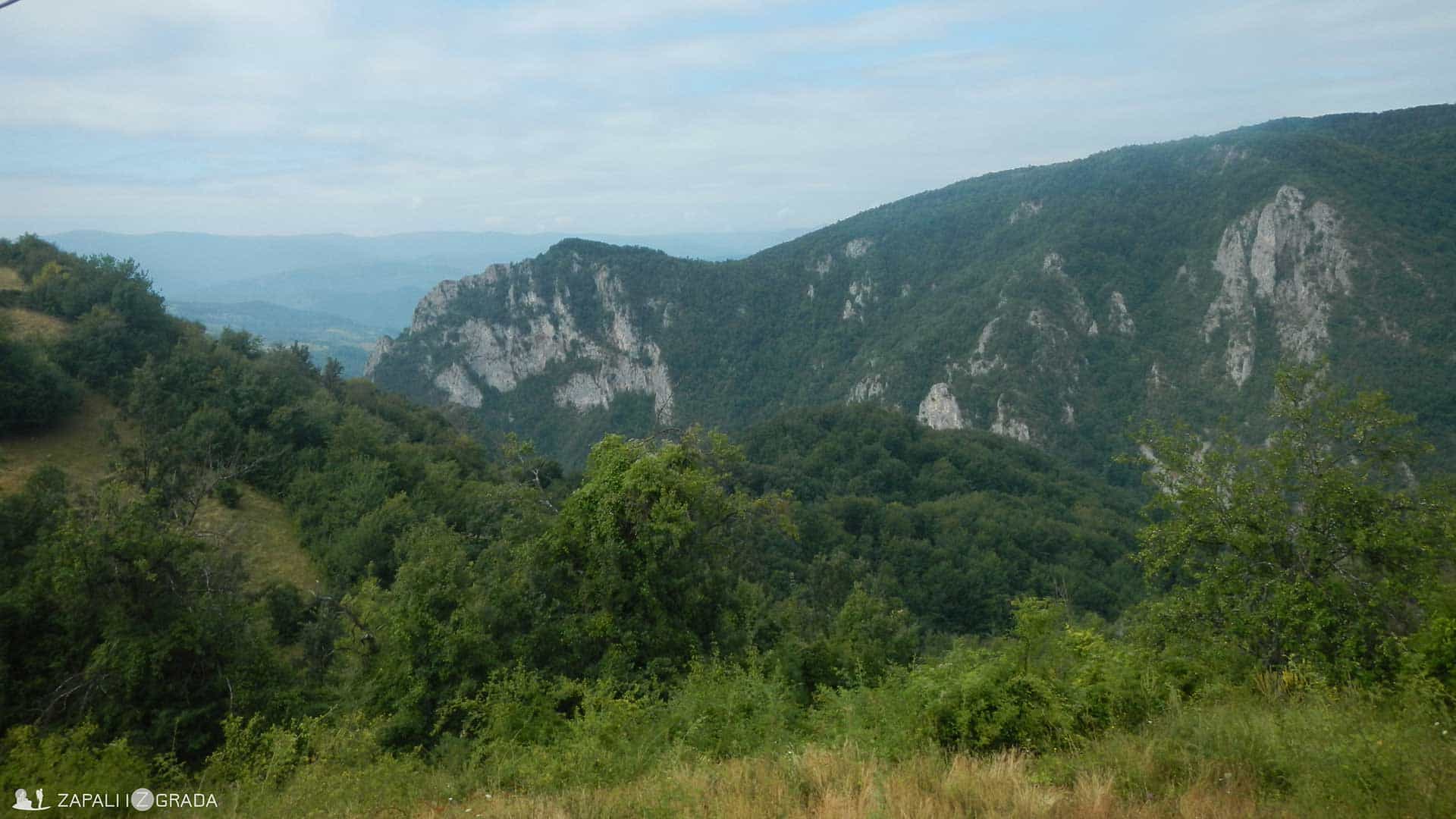 Tribuća river is formed from multiple sources on the mountain Tornička Bobija and rapidly heads towards the Drina, before joining Trešnjica river. The river has a less than impressive water capacity. 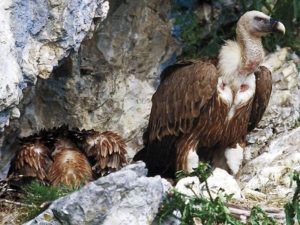 But, if you look at the huge and steep cliffs that this small river has abraded over the years, you realize that its power is far greater than you have thought at first. During my stay in the canyon I could not help but thinking about the centuries-old struggle between stone and water. It really thrills me how each time the water wins the fight, leaving behind a unique artwork. It is news for many that these cliffs, beside Uvac, are the only habitat of the griffon vulture in Serbia. I can only say that these birds must have impeccable tast, when I see the locations they’ve chosen for their residence.

Tribuća canyon is one of the few vertical canyons in Serbia and one of the most extreme. It is just one kilometer long, but passing through the canyon takes about four hours. 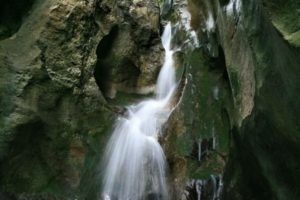 Given the fact that it has five waterfalls with a height between 5 and 20 meters, it is clear that you need the assistance of experienced guides and specialized equipment. There are several companies that organize adrenaline adventures. I chose Explore Serbia and the price was 70 euros. In addition to having had a smooth experience, and in line with what was agreed, I had a very pleasant surprise. Maybe you’ve read the story of our climbers who had a successful expedition to the top of Toblerone (aka Matterhorn) last year. The group had two women and a boy with disabilities. It was led by Petar Šunderić who was also the leader of our small team, so I had the honor and privilege to meet a person from the hiking “crème de la crème” of which I’m particularly proud.

Surprisingly, everyone from the group arrived on time. I guess they were all very eager to start. And as Petar was checking the main equipment, the other adventurers used the time to get to know one another and make some final preparations. We borrowed the equipment (a canoeing neoprene suit, helmet, belts with spring hooks) and started (for many of us) an unknown adventure. After a 40-minute walk down the hill and enjoying the fragrant, colorful scenery, we reached the river that stirred our blood to boiling. 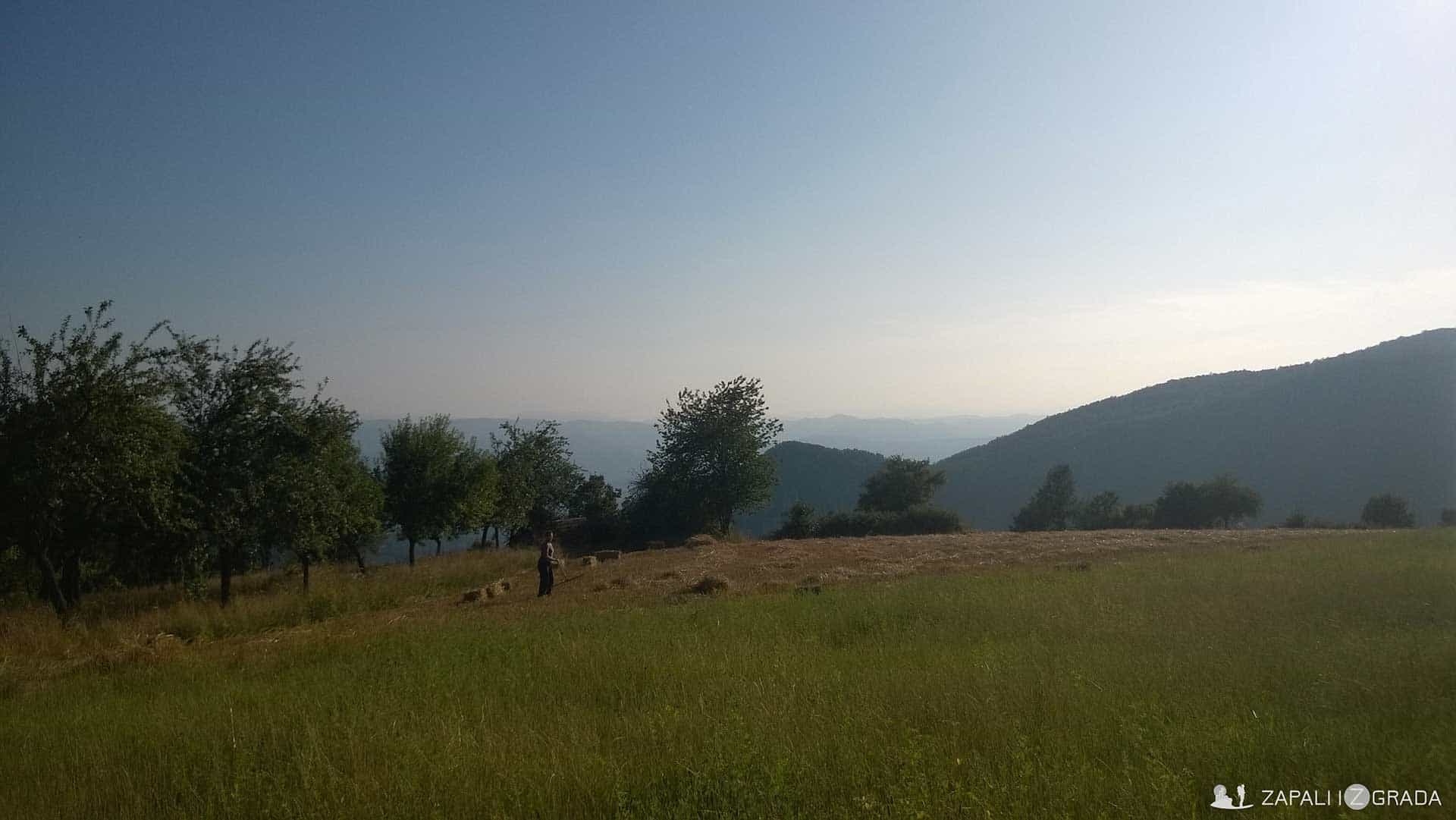 We suddenly entered the old, dense forest and enthusiastically absorbed the cold decades-old shade. I had the impression that we suddenly left behind all our worries and directed our thoughts toward this most extreme Serbian canyon. Tightening our equipment, a group photo for a long memory, and we finally started. 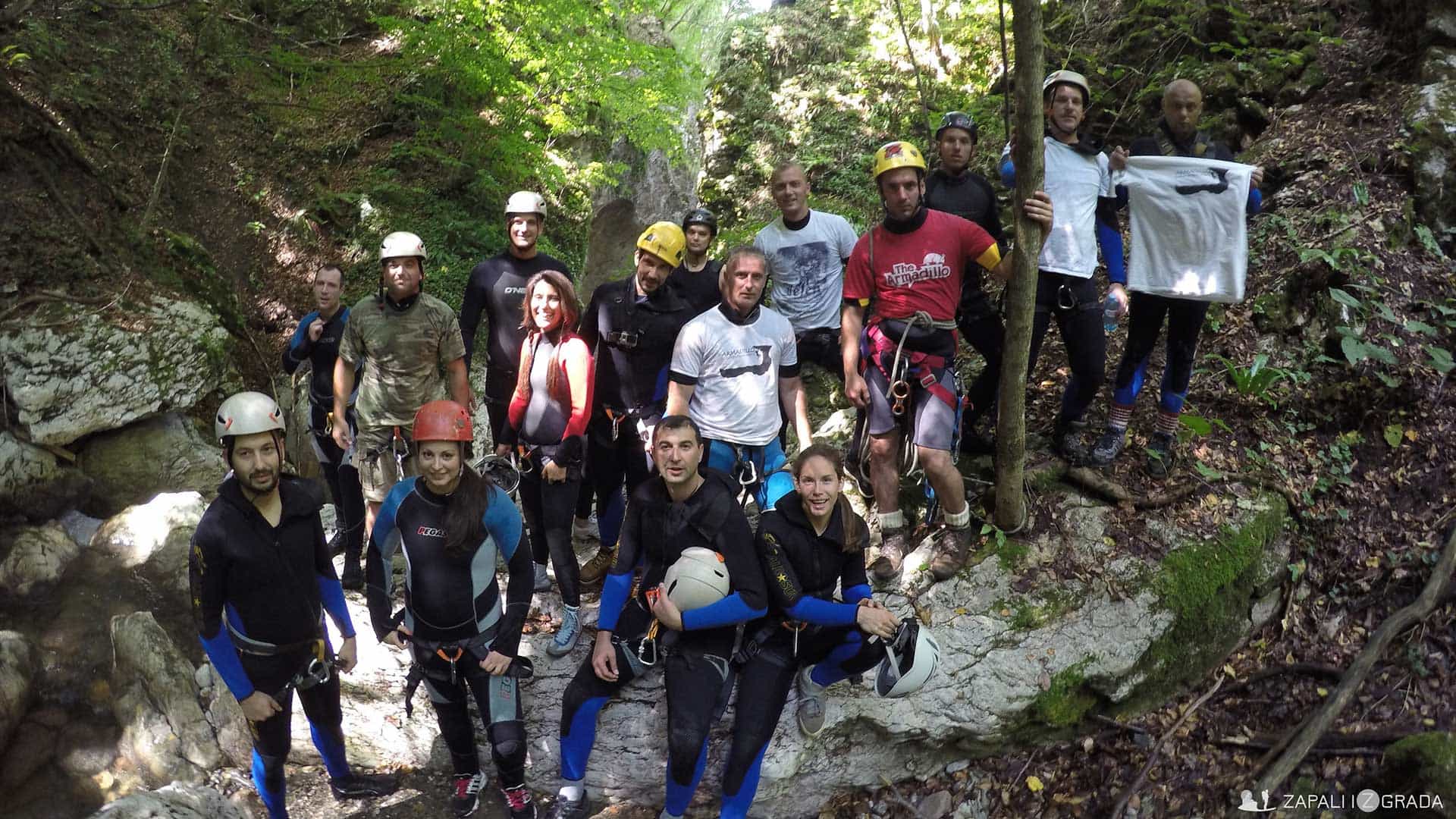 The entrance to the canyon is what our people sometimes say – a first (child), and a son! (Meaning that along with being blessed with a child, you are also lucky your firstborn is a son). It seems incredible, almost like a fairytale. Tribuća carved a real funnel on its way, so we had to follow the course of her whim. 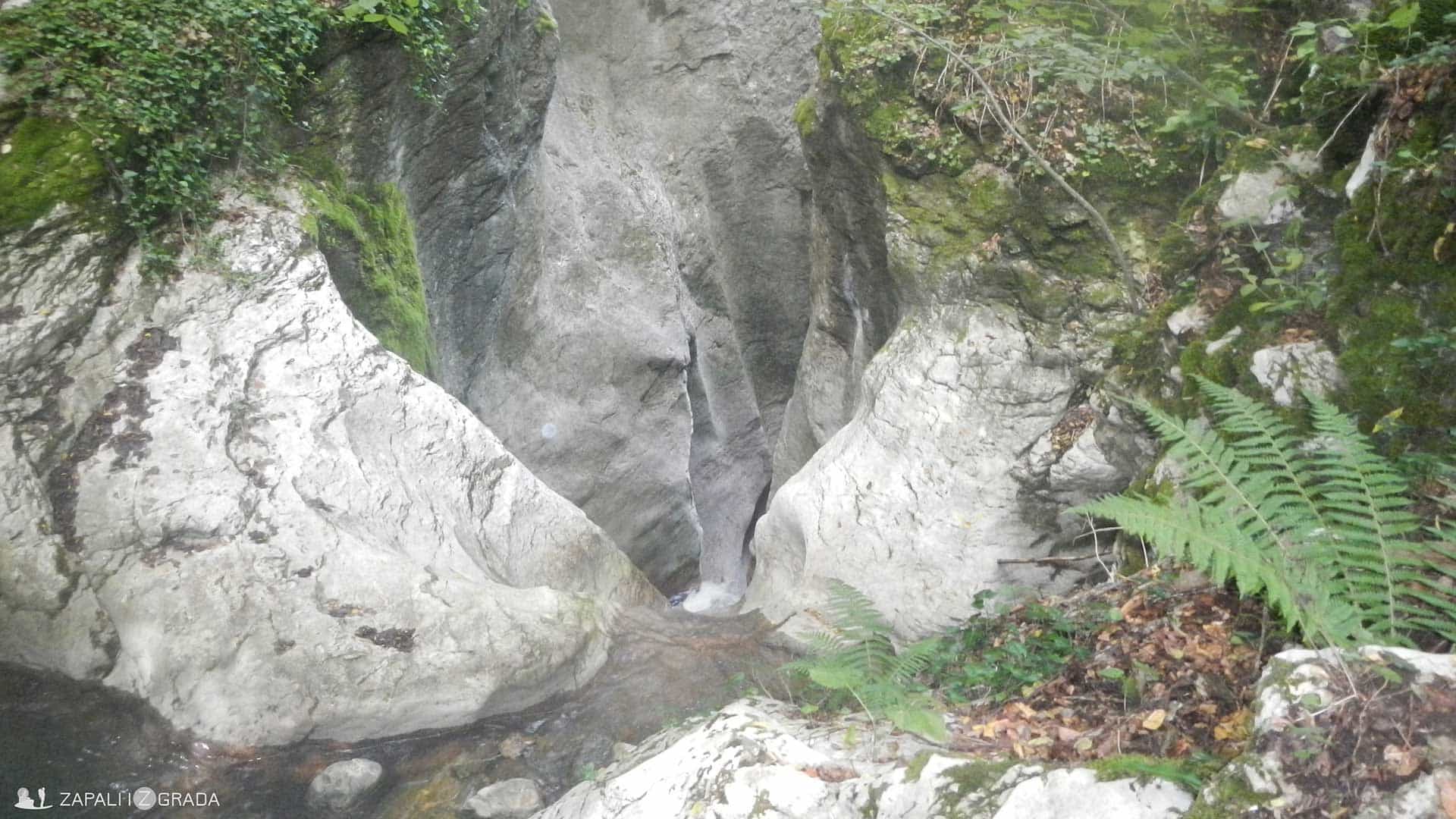 As much as I longed for this adventure, at this point I had mixed feelings: anticipation, awe for the forces of nature, but also questioning myself whether I will be able to do this. I urged myself – if others can do it, you also can! I’ve never been the weakest link, so I was going to keep it that way. I noticed that others were also a bit “cramped”. The first to start (of course) was Petar, the leader of our expedition. He climbed up a smooth large rock like a cat, and secured the location. 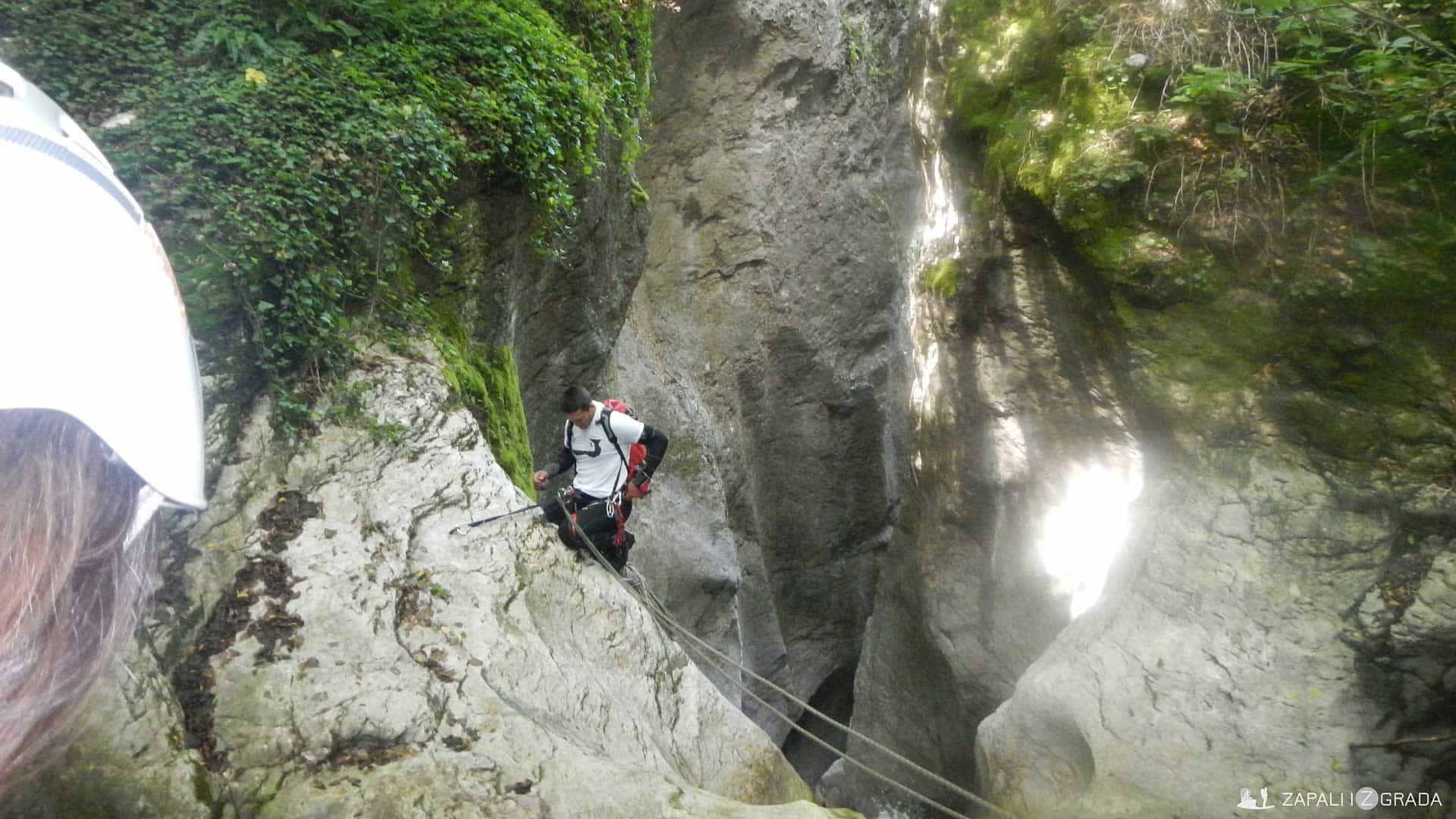 When I saw the ease with which he moved, I felt enlightened. Far from thinking that I can do the same, I was just sure that everything would be fine. As if his security and experience telepathically transferred to us. Rather timidly and clumsily, we passed the first hurdle. As if we needed to “gather” ourselves a bit, where we are and what we should do. 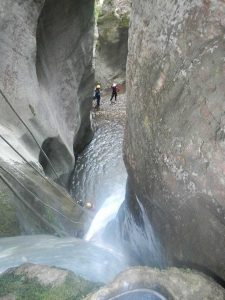 You soon come to a 20-meter waterfall and realize it’s time to stop posing. Fortunately, the first “shock” is immediately absorbed and everything runs smoothly. The hum of the powerful waterfall is ringing in your ears, while adrenaline flows through your bloodstream. When you get down and see the amphitheater that’s been carved for centuries, you realize how privileged you are to be at such an amazing place.
The fact that we had to wait for all group members to come down was not annoying at all. 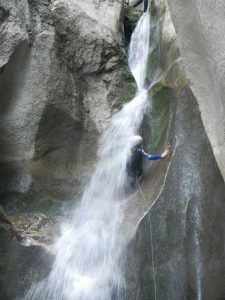 On the contrary, it gave us plenty of time to listen to the breaths of nature and enjoy its superb creations. 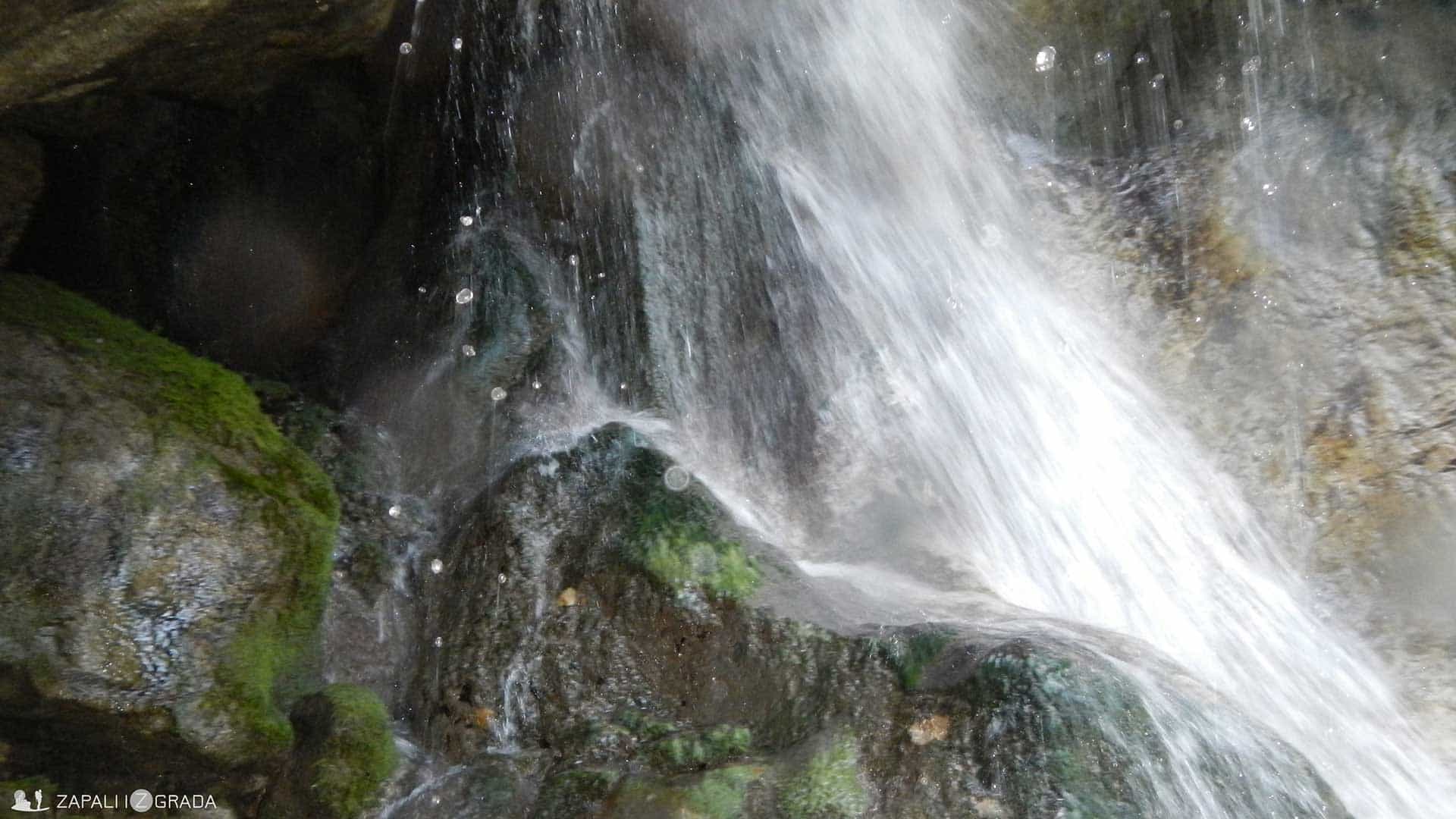 As the adventure progressed, we were getting noticeably more relaxed. Not in the sense of neglecting or disrespecting the canyon, because such tours do not permit it. Please note that passing through the canyon requires you to be very careful! It takes both physical and mental concentration and stability. We simply got hold of the positions and body movements required to advance and began to truly enjoy ourselves. It felt so good it’s a shame the waterfalls were not higher. Or, that there were not more of them. 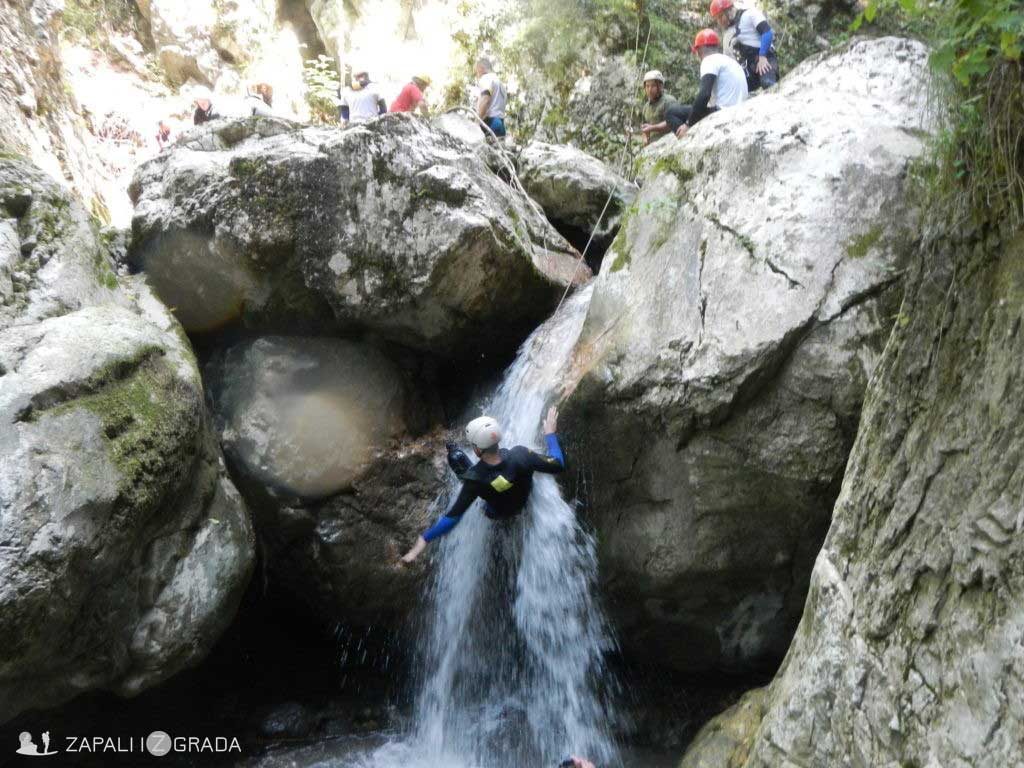 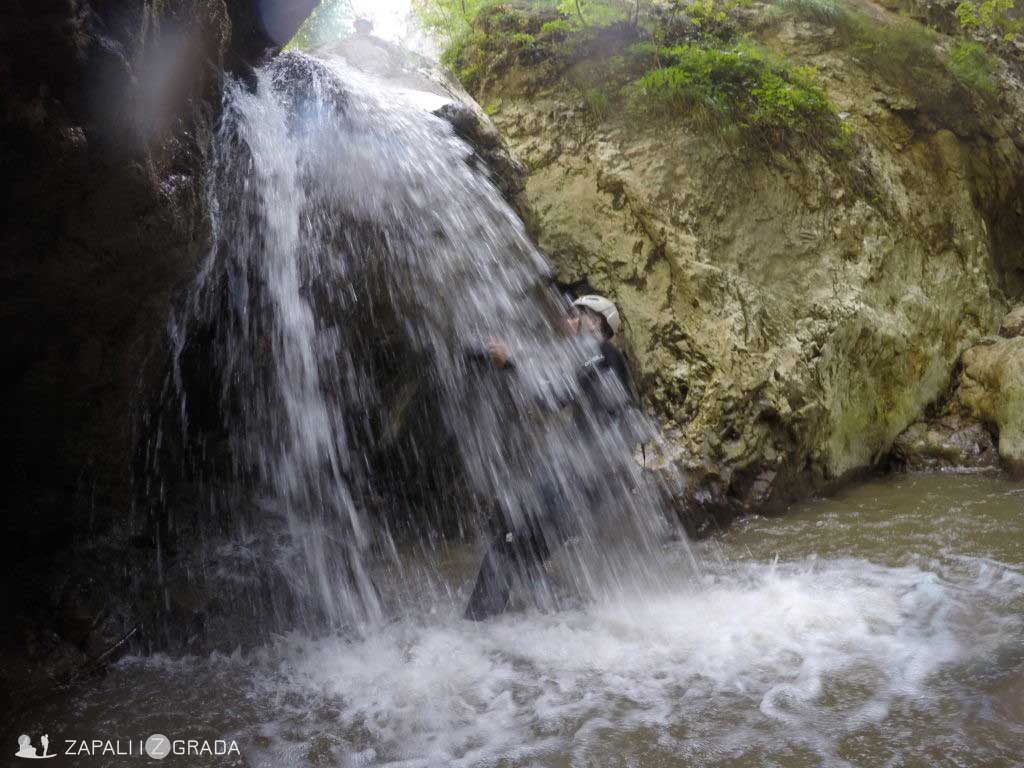 When we got to the last big waterfall we were astonished. The scene was completely surreal. It looked as if the river drilled through the rock on two sides and formed a marvelous continuation of its journey in free fall, or as if along the way it pushed and stuck a huge stone ball in the middle of the stream. 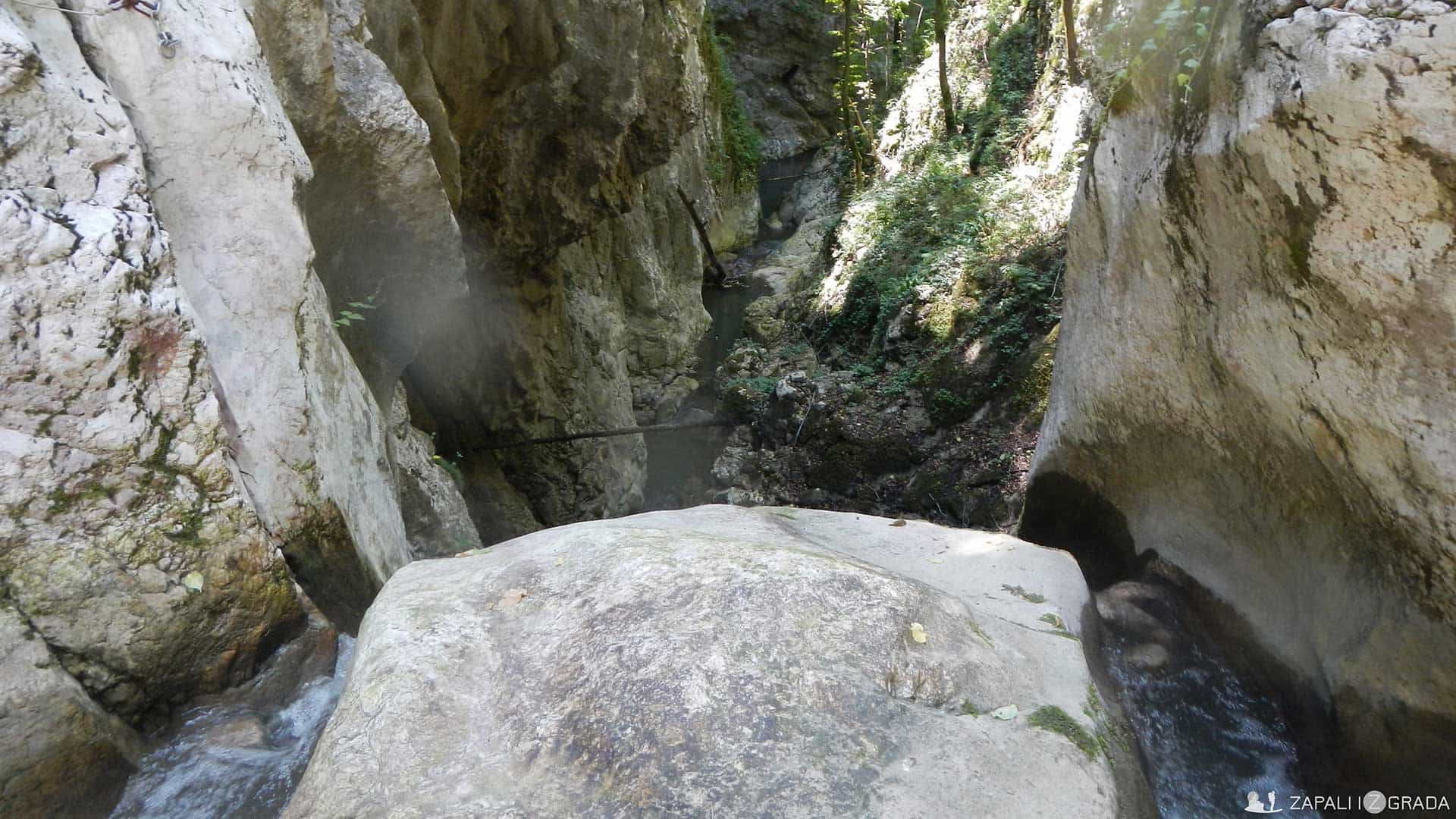 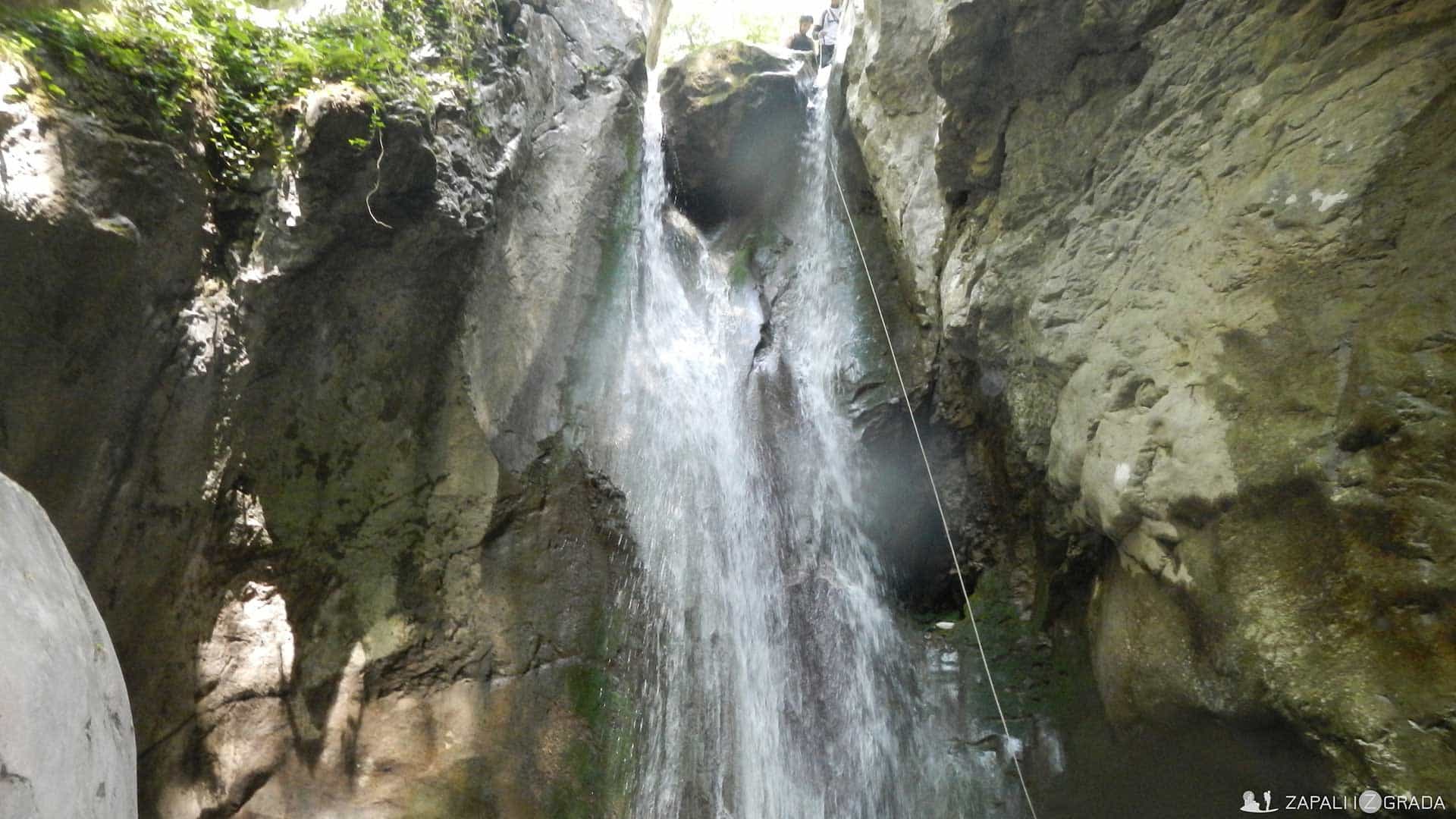 Whenever someone mentions Tribuća canyon, my first association is the deafening roar and liters of water flowing over me as we cascaded down this 20-meter waterfall. 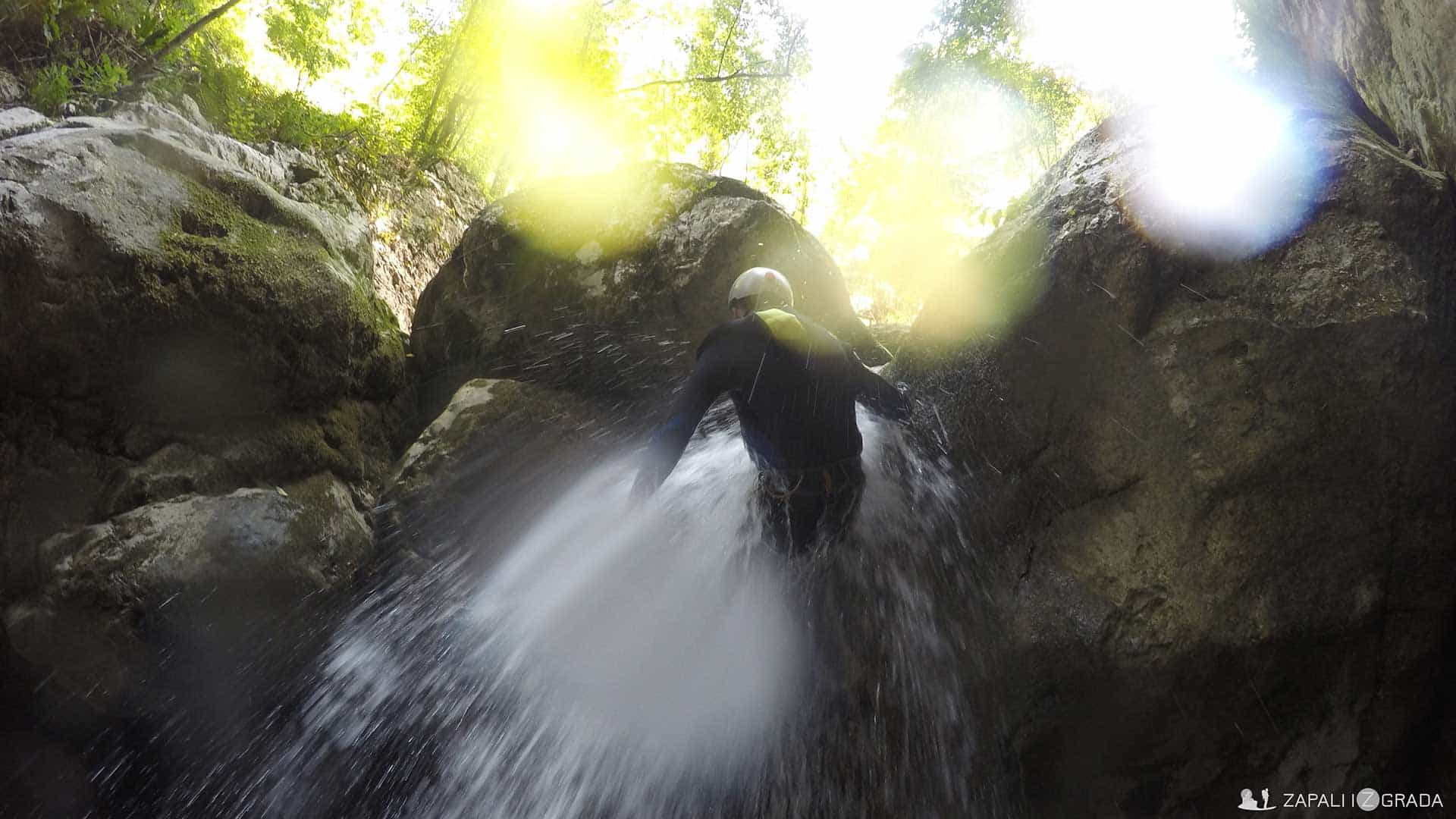 After this absolute ecstasy, we came to the area which can be described as classic canyon landscape; smaller waterfalls, interesting rocks and vegetation, wells, water slides … Not that this was bad and uninteresting, but we were already a bit “spoiled” and raised the expectations bar. 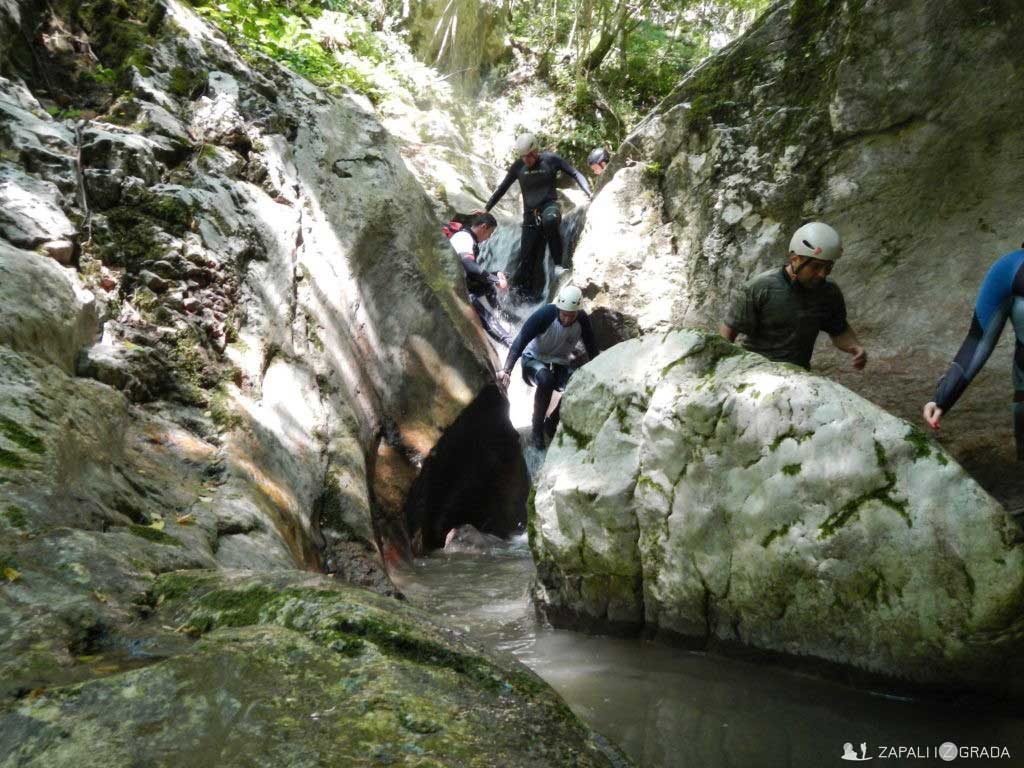 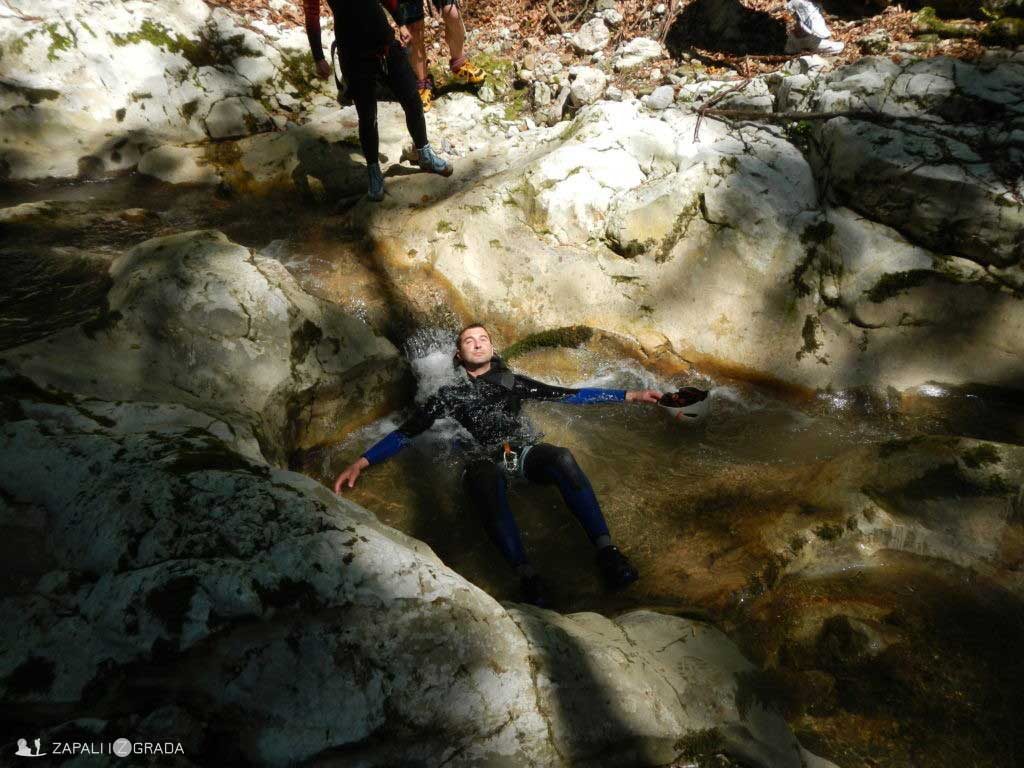 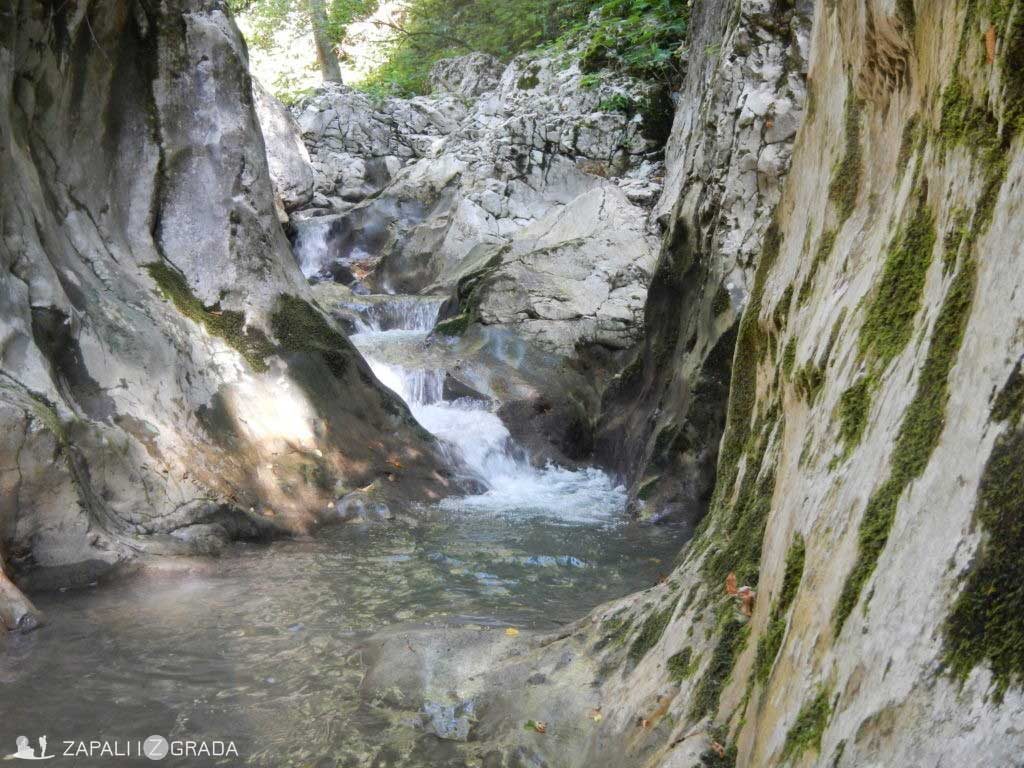 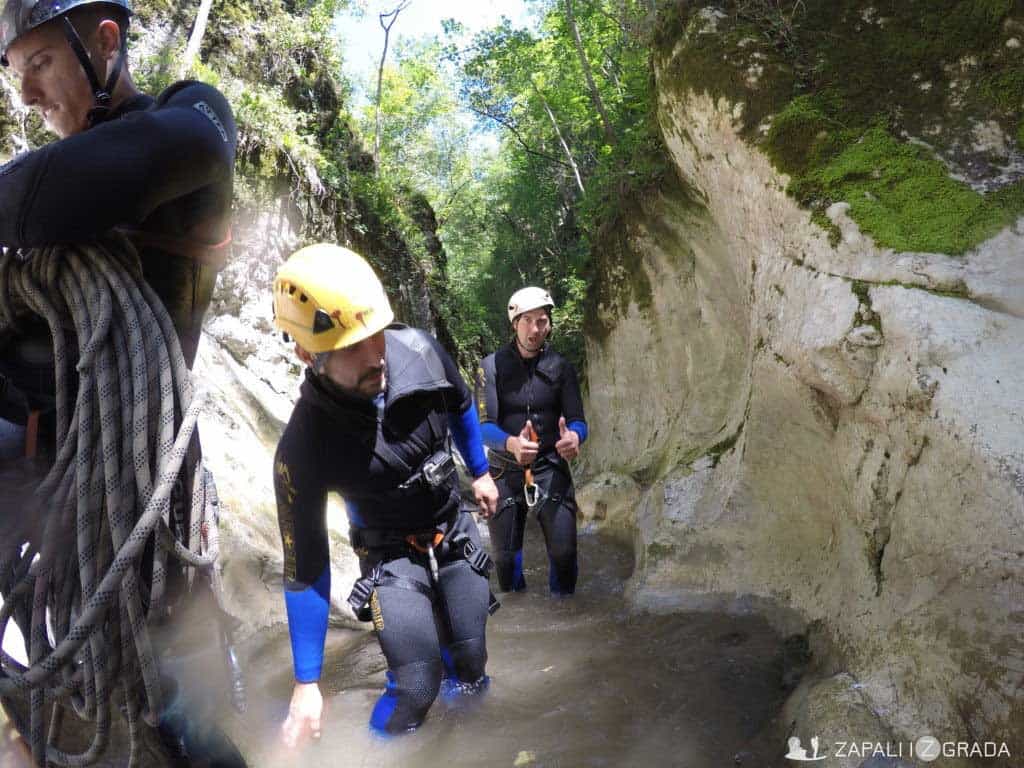 The only thing that attracted our full attention was the remains of the water mill of Sava Savanović. Legend has it that there used to be 5 of them. Also, legends have some other things to add to the story about Sava. 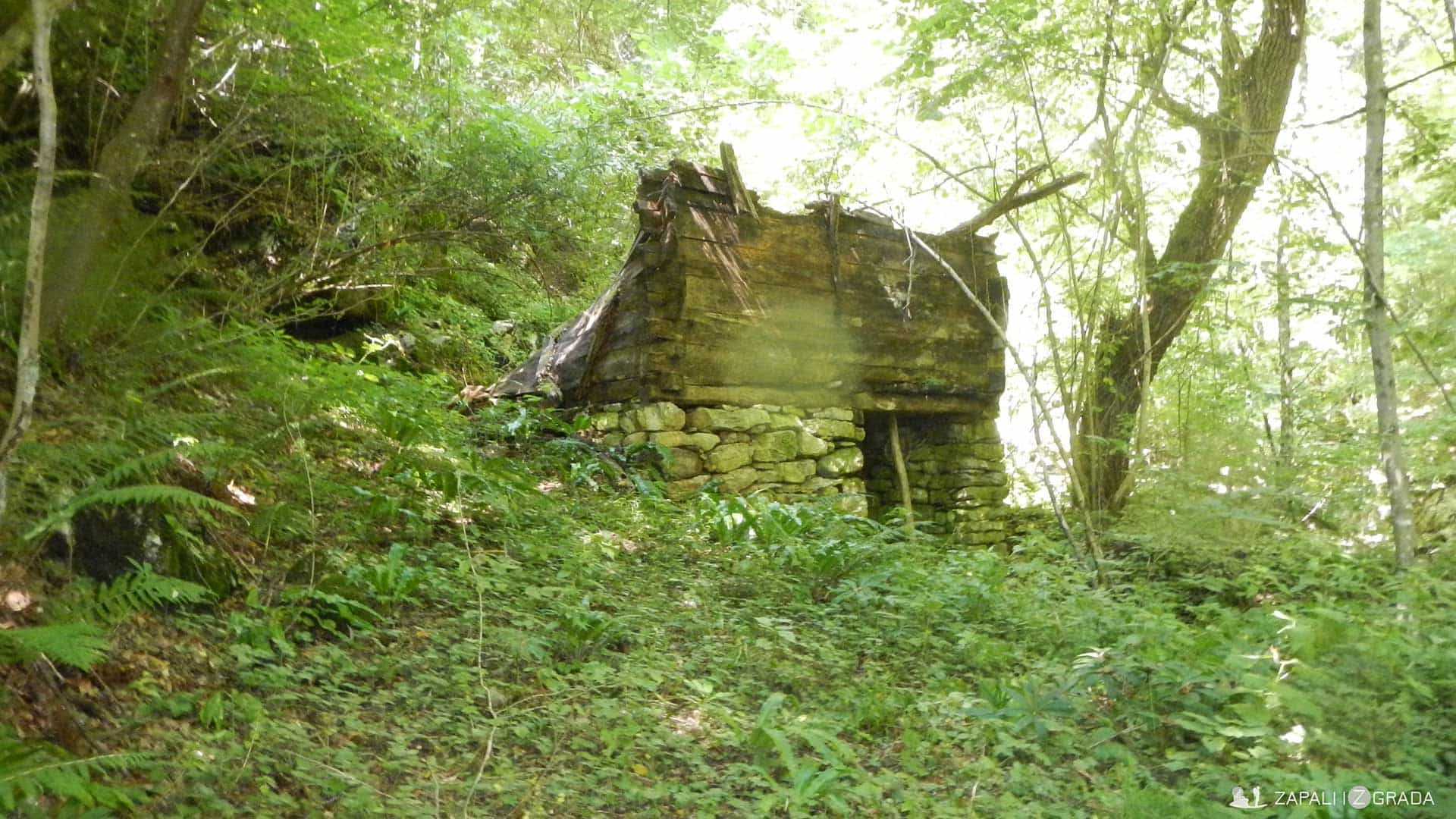 Very soon we reached the end, and then we had a “cold shower”. We had to go back to the starting point. It would not have been a big deal, even with the uphill one-hour walk, or the temperature of around 35 degrees, had it not been for the neoprene suit. I had the impression that it would have been easier if we were to keep a fire burning, while carrying hot water bottles around the belt.

When we finally saw Milan’s household, the gates of heaven opened for us. We started with fresh water, drinking and washing hands, compensating for the water lost through sweat, and then came the feast: plum brandy, soup with homemade noodles, roast meat, premium cheese and sour cream, potatoes, hot baked bread … a special place was reserved for the almost forgotten taste and smell of real tomato…